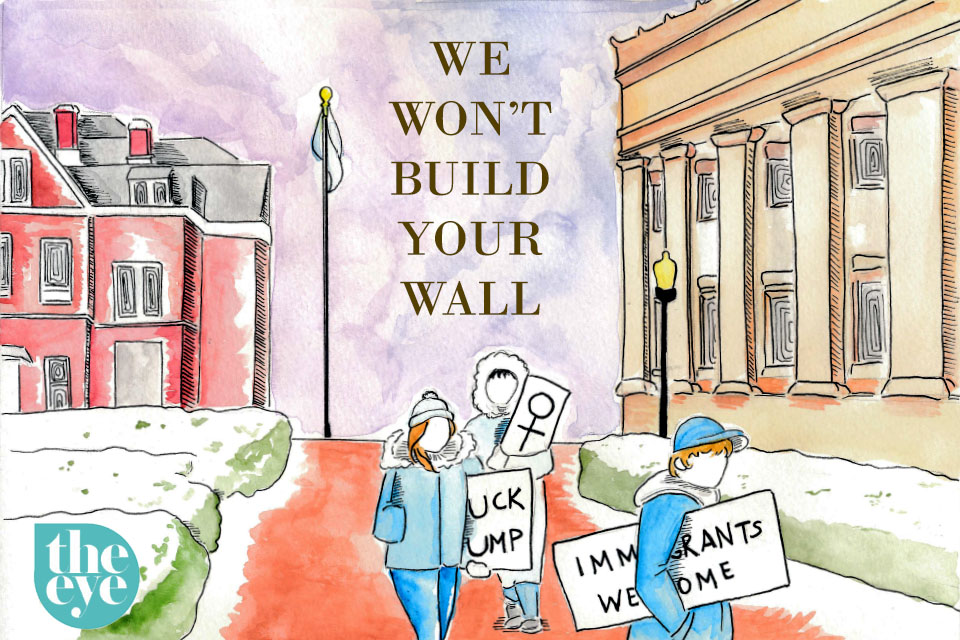 Like last week’s issue, The Eye finds itself unable to escape the whirlwind of changes taking place in our national political landscape. It seems as though every time we look at the news, a fresh headline threatening social and constitutional freedom pollutes our screens.

This week, our lead examines the uncertainty and urgency that has surrounded Donald Trump’s unexpected rise to the presidency. Ana Espinoza speaks to members of Columbia’s community of undocumented students who have organized and mobilized in response to the potential repealment of DACA and the Trumpian anti-immigrant bombast. The Undocumented Student Initiative hopes that the University will follow suit and act.

Trump’s immigration ban, although stayed by the courts for now, has had real effects on Americans, some of whom are at Columbia. Staff writers and editors profiled three students who have had the immigration status of family members or significant others challenged by the executive order.

But these are only a few of the pieces featured in Volume XXII Issue 2. Sonia Steinmann interviews Nathalie Handal, Columbia professor and author of “Lady Liberty,” a poem plastered on the walls of New York City subway trains. And Matthew Petti scours through Spectator’s dusty old archives to find out that Columbia’s activist culture predates the infamous 1968 protests. In fact, it can actually be traced back to a conflict during the 1932-1933 school year between then-Spectator editor in chief, Reed Harris, and then-University President Nicholas Murray Butler.

Finally, in this week’s View From Here, Arminda Downey-Mavromatis considers her grandmother’s failing memory and Alzheimer's disease diagnosis—and the quest for learning and remembrance it has imbued in her. She’s her grandmother’s historian, her archivist.

Have fun leafing through our second issue, and subscribe to our new weekly newsletter, As We See It!