The Basement Beneath the Exalted Halls

The Basement Beneath the Exalted Halls 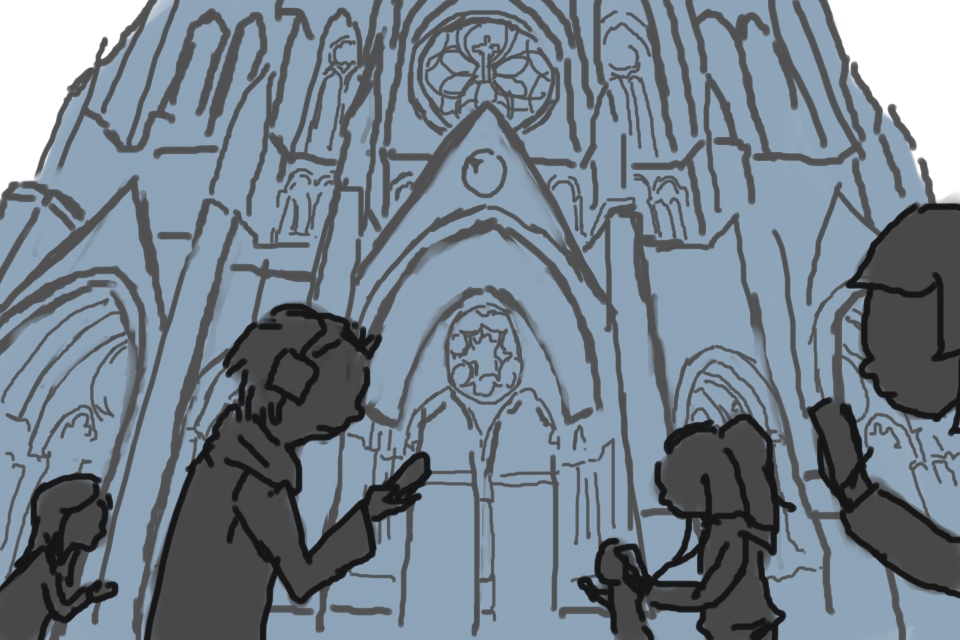 Directly underneath the Cathedral of St. John the Divine and accessible from a small staircase outside is a gymnasium where, every week, dozens of volunteers and staff set up tables, distribute pamphlets, and serve breakfast and lunch to the public at the Sunday Soup Kitchen.

Only four blocks away from Columbia’s gates on Amsterdam Avenue, the cathedral hosts a wide scope of social service programs in need of volunteers—it seems to offer many more opportunities for Columbia students than just a photo op on the steps outside or a chance to watch camels parade down the aisles at the Blessing of the Animals. However, being a student is difficult and time-consuming, and even those looking to do community service outside campus might prioritize their own goals—like being able to put volunteering experience on their resume—over the organization’s more altruistic ones.

Last weekend, I went to one of the cathedral’s Sunday Soup Kitchens. It was cold and raining outside, and by the time I got to St. John the Divine, my boots were soaked. I shuffled along the outside of the cathedral to find the staircase leading down to the basement. As soon as I got inside, I followed the sounds of utensils and chatter, and upon entering the gymnasium, I was hit with a blast of warmth and the comforting smell of hot food.

I sat down on the side of the gym, perpendicular to the assembly line of volunteers, at a table strewn with condoms and informational pamphlets with Kalie Kamara. He’s the volunteer outreach coordinator for Cathedral Community Cares. As the social outreach branch of St. John the Divine Cathedral, CCC offers resources to the public to combat health issues and hunger through Sunday Soup Kitchen and the Clothing Closet, which gives away donated casual and business attire.

Kamara took over the job three years ago, but he says he’s still learning about the ins and outs of the position. “I try to reflect on [what] I could do better. I could push myself,” he says.

One thing he thinks can improve is CCC’s relationships with volunteers. In CCC’s various social service programs, Kamara works with people across the spectrum of the community: working adults, former soup kitchen clients, and, on occasion, students.

As I sit with Kamara in the basement of the cathedral, I’m watching the door for a group of students. Kamara, and everyone else I speak to at the soup kitchen, insists that there’s a Columbia contingent that comes nearly every Sunday to speak to clients about public benefits. But nobody can tell me what the group is called or who the students are. And on the Sunday I’m there, they don’t show up.

Who are these mysterious good Samaritans? Kamara insists that he doesn’t want to get anyone in trouble, but after I press, he explains, “They don’t email me, they don’t call me the week before to say that they’re going to come. Ideally, at least someone would email me to let me know when you’re coming.”

Rather than developing a formal partnership, this group seems to take a more independent approach. “They do their thing, and then they leave,” Kamara says.

Katrina Martell, who graduated from Columbia College in 2016, is one of the only Columbia students that Kamara can name. She has cultivated a close bond with him through her volunteering.

Martell worked in the Internship in Building Community for the past three summers, a combined seminar and practicum through which undergraduate and graduate students help run Columbia pre-college programs. Martell ran the community outreach portion of the curriculum, bringing students to various local organizations around Morningside Heights—one of her favorite places to bring her students to volunteer was at St. John the Divine, folding and sorting clothes at the Clothing Closet.

“Kalie was one of our most dependable partners and also one of the most fun,” Martell says of the work she and her high schoolers did at CCC. Even though the tasks they did were simple, Martell says she appreciated how Kamara made sure to explain the process to volunteers.

When I tell Kamara that he had been popular among Martell’s high school students, he blushes.

“I try to make it a little bit enjoyable for them,” he says. “I think that’s one of the reasons why Katrina really liked coming here—the way that we just get them to talk to each other, get them to talk about what’s on their mind. … It’s like, what did they learn from the experience?”

I eventually find the students I was tracking down at the soup kitchen: They’re part of Student Health Outreach, or SHOUT, a student group with Community Impact at Columbia. At St. John the Divine, they speak with clients who come into the soup kitchen for meals to connect them with resources like food stamps and health insurance. SHOUT currently reaches out to four local food pantries and soup kitchens each week, rather than maintaining a sole partnership with CCC.

Katie Kester, a senior at Columbia College, has been volunteering with SHOUT since her first year on campus. She explains that the information SHOUT provides consists largely of one-time referrals, so the students try to reach as many clients as possible in multiple locations.

Despite the lack of communication between SHOUT and CCC, Kester maintains an efficient evaluation system for the work the group does, which is reported to Community Impact. Each time a SHOUT member speaks with a client, the volunteer will fill out an intake form, and all the information is put into a Google Doc and analyzed to determine if they’re reaching enough people.

Of course, there are endless organizations outside Morningside Heights that would welcome extra helping hands. Lorenzo Gibson, who graduated from Columbia College in 2016, took a seminar last fall taught by Roosevelt Montás called Freedom and Citizenship in the United States. The class collaborates with the Double Discovery Center, which offers mentorship and college exposure to high school students around New York City.

Gibson found that having his program connected to a formal seminar increased dialogue and reflection on the work they were doing, which was largely facilitated by Montás.

“That’s often the problem that I think a lot of people fall into—that they often don’t give themselves the space to reflect on what they’ve done,” Gibson explains.

There are also logistical difficulties in volunteering as a student: a new schedule every semester, breaks in between, and the possibility of moving far away from the organization you work with after graduation.

To Kester, Columbians seem like an unreliable subset of volunteers overall. “I worry sometimes about what our image looks like to St. John the Divine when some weeks we have five, seven people, and it’s looking really great, and then some weeks two, three people show up,” Kester says. “I know it looks inconsistent to them, and I feel bad about that.”

So how should Columbia students balance their responsibilities at school with opportunities to volunteer? Kamara thinks that they should only engage in community service if they really want to in lieu of pursuing hours for résumés.

“I hate when schools make you be like, ‘Do X amount of volunteer hours for upgrading your diploma,’” he says.

Columbia certainly doesn’t bribe students with gilded diplomas, and some fault it for taking the opposite approach: not doing enough to make students aware of the kinds of community serviceopportunities available to them. “I don’t think that [Columbia students] know that the impact they can make can be so direct,” Martell says.

Martell believes that there should be resources for students to learn about volunteering opportunities. “Even just making students aware that these are our neighbors that do service—like Kalie at the Clothing Closet—or Community Impact programs, even, which is housed on campus and people still don’t know about it.”

These resources can also be found on the individual level at the University. In his work with the Double Discovery Center, Gibson received great support by Montás and benefited significantly from his efforts to bring the conversations of service into the classroom. “Faculty have an important role to play in that,” Gibson says about bridging the knowledge gap regarding service opportunities for Columbia students.

In addition to a supportive faculty, being connected to a large university like Columbia has its perks for those who use their time to give back. “A lot of the resources that we’re referring clients to are Columbia programs,” Kester says. “It’s a place that people trust. And it’s a place that we know well, so I always feel a little more comfortable referring people to places that I’ve worked with—I know the people there, and I know that they’ll have a good experience if they go.”

As we sit on the side of the room in the basement of the cathedral, watching people file through with their trays, Kamara makes conversation with me and the other volunteers in between answering questions from clients and running back to his office. At around 12:55 p.m., one of the CCC staff yells out to the room: “That’s it! No more!” People hurry to finish their meals and hand their trays in.

Kamara leans over and asks me what I think about the incoming Trump administration. I roll my eyes at his name and counter with my own question. “Do you feel like there are any new pressures on you at CCC ever since the election?” I ask. “Not yet, but there will be,” he replies. He worries about cuts to benefit programs in New York City, which will affect access to resources like food stamps, leading more people to rely on soup kitchens like the one in the basement of St. John the Divine.

The question then is how groups like CCC can fortify themselves against new external pressures. And for Columbia students, answering this call will require more effort to bridge the gap and bolster dialogue between students and outreach groups.

But who bears the responsibility to push for more integration?

“It’s a structural thing,” Gibson says. “I hesitate to say this, but if you have a university that’s trying to compete with other universities … and therefore is going to be devoting resources to things that garner more prestige—nowhere in that kind of equation do you see a real opportunity for seriousness about the community service.” For Gibson, demands on students and faculty, locked away in an ivory tower, don’t leave enough freedom for direct interaction with the community around them.

“I wish Columbia students were a little bit more involved in volunteering,” Kester says. “Part of it is … not knowing about [opportunities], but … people are just really, really busy, and that’s just something that they haven’t prioritized.”

With more institutional support, students may be able to be more conscious and reflective on the real impact they’re making, according to Gibson.

“I think just generally, we move too damn fast, and in that process,” Gibson says, “we lose the opportunity to really put all the pieces together for ourselves, as people who are giving them ourselves.”