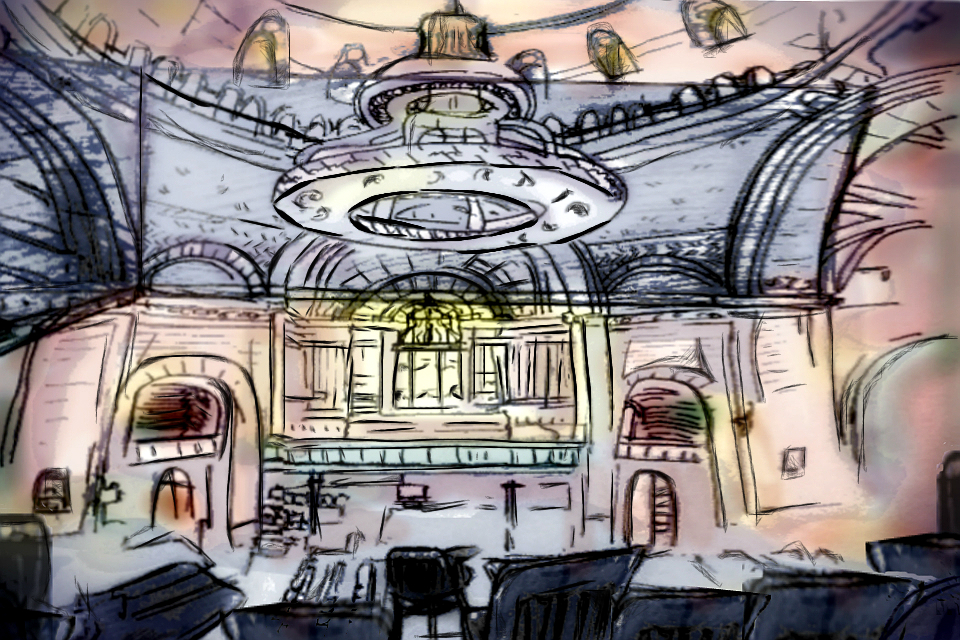 Pointing out its distinct tile work, brick work, stained glass windows, and chandeliers, Father Dan O’Reilly explains that St. Paul’s Chapel is not supposed to look like other buildings on campus. “Because it looks so different on the interior, I think it is sort of an oasis that students can come in and feel that they're no longer in New York City, that they're in a space of prayer,” he says.

St. Paul’s different appearance can be attributed to the fact that it was the first Columbia building not designed by McKim, Mead & White. It is not only ornate, but also distinctly religious, with tiny cherubs perched atop tall columns and the Latin “PRO ECCLESIA DEI” (“For the Church of God”) inscribed above the entrance in all caps.

Having grown up Episcopalian, I have seen many similar fancy churches, ones with intricate stained glass windows and services that are regularly accompanied by a professional organist. I didn’t expect to continue going to church once I came to Barnard, but St. Paul’s Chapel won me over.

During readings at St. Paul’s, I often let my eyes wander toward the salmon-colored brick that covers the domed ceiling, the darkly lit stained glass scenes—less descriptive to me than familiar—and the inscriptions that wrap around the inside of the chapel, acting as headings to each side of the interior.

From the front of the church, specifically the choir loft, where I often find myself on Sunday evenings for the Episcopal service, I can only see part of the verse from Acts 17:23 above the altar to my right: “Whom ye ignorantly worship, him declare I unto you.”

As it’s written inside St. Paul’s, this inscription leaves out the part where St. Paul says that ye are worshipping the God who created all nations of men out of one blood. In a space that’s intended to welcome students of many different faiths, it makes sense not to declare exactly whom every student should worship.

Still, there is a sense of unity in the notion that every person from every nation shares with one another the basic biological functions of blood—a unification that could translate into the notion of students from every religion sharing one space for worship. Even though it intends to serve students of all faiths now, the space was originally built for Christian students.

The Episcopal Campus Ministry’s Reverend Richard Sloan acknowledges that the space might feel more familiar to students of certain Christian denominations, like Anglican, Episcopalian, or Presbyterian, but that it was designed to be a chapel for all faiths represented at Columbia.

I feel so lucky to have beautiful organ music accompanying our hymns and prayers, but I can’t help but wonder: Where do we get the money for that? And where do students who aren’t Christian—who don’t have a sacred space built into their campus—go to find their “oasis,” so to speak?

An established physical space is important for providing religious groups with the ability to focus more energy on what they came together to do in the first place: practice their faiths and celebrate their religious traditions. But not every group has a purpose-specific space to practice their religion. While the Episcopal students and the Catholic students have St. Paul’s Chapel, and Jewish students in Hillel have the Kraft Center, other religious groups—including the Hindu Student Organization, the Columbia University Buddhist Association, and the Baha’i Club—have had to find their own space for meetings in classrooms, dormitories, and the chapel’s basement. For some, these space issues have a direct impact on the practice of their faith.

The Office of the University Chaplain declined to make anyone available for an interview.

The Columbia University Buddhist Association traces some of the group’s recent challenges, including a decline in membership, to problems in finding a consistent meditation space. CUBA holds weekly meetings with different guest teachers every week who lead the group through a half-hour meditation as well as an hour-long discussion. Up until spring of 2015, CUBA met in the Gustavino Room in the basement of St. Paul’s. Raphael Gilliam, CUBA’s co-president and a first-year at the Graduate School of Arts and Sciences studying anthropology, says this space was especially convenient because of its location right next to a closet in which the club could keep its meditation cushions.

Unfortunately, Gilliam says, there were occasional disruptions in the basement of the chapel. At the same time as CUBA’s meditations, a Christian student group held a program on the main floor featuring a band and music. “Some members didn’t like that, some tolerated it,” Gilliam says.

Eventually, CUBA began going to open classrooms for weekly meditations instead. This shift to classrooms, according to Gilliam, caused the group’s membership to plummet. When leadership changed and Gilliam became a co-president the next semester, CUBA was still not allowed to use the chapel. The group tried out the Broadway Room in Lerner Hall, but found that the space was too often used for other events. In addition to no longer having the space below the chapel to use for meditation, the group also lost access to the conveniently located closet in which it stored its cushions. Because of that, members had to transport around 20 large meditation pillows to every meeting.

This past semester, the group settled on a classroom in Hamilton Hall, which, Gilliam says, is adequate. “It is, I think for the members, a little unusual to come to a classroom with the intention of that relaxing, meditative state,” Gilliam says. “It’s hard to get into that when you’re in a Hamilton classroom with wooden desks, and so forth.”

Nevertheless, Hamilton is relatively free from distractions, which is one of the key factors in creating an ideal space for meditation. “There is no place that’s totally soundproof or anything, but as far as the sound, the place we’ve had in Hamilton has been pretty sufficient,” Gilliam says.

Not everyone agrees on what creates a good environment for prayer or meditation. Columbia College senior Maya Anand, who studies information science and often hosts meetings for the Baha’i Club, says that many spaces on campus just aren’t that conducive to creating a spiritual environment: Lerner’s lounges have windows, residence hall lounges are too busy with other students, and classrooms aren’t as warm, inviting, or conducive to a reverent, prayerful environment, Anand says.

Members of the Baha’i Club say that their issues with booking space stem from what they feel are communication problems between the group and the Office of the University Chaplain, and from the fact that many of their regular religious gatherings do not occur on a weekly basis.

While the group does have a regular weekly meeting space, according to the Office of the University Chaplain’s website, the difficulties in obtaining spaces have led members of the club to use their own dorm rooms for specific non weekly meetings such as the Nineteen Day Feast. Anand describes the meeting as a time for prayer, spiritual devotions, reflections on the needs of the community, and socializing that occurs every nineteen days.

Anand says it has been challenging to book rooms for the Nineteen Day Feasts, since they fall on different days of the week. This problem is exacerbated when the 19th day falls on a Saturday or Sunday, since Earl Hall is closed on weekends. In fact, she says, the information on the hall’s website is so unclear that she has had to go directly to Earl Hall in the past to find out whether or not a request has gone through.

Anand believes that the booking process might be easier if the OUC were to have a better understanding of the Baha’i faith. “I wish that when I was trying to book space for the feast, the assistant chaplain and the chaplain knew what the feast was,” she says. “Instead, I found myself trying to explain my whole religion and how we practice and I wish that some of that was already known.”

Because of this, Anand hosts meetings called devotionals in her suite, where people of all faiths can come to share prayers, meditations, and poems, and to have discussions. She says that when people arrive after devotionals have begun, she often has to interrupt the meeting to sign them in if they’re not from Columbia College or the School of Engineering and Applied Science.

For the Baha’i Club, the issue of space extends beyond campus. Anisa Tavangar, a junior at Barnard, described Baha’i meetings as more informal and community-based. “We also don’t have a building, like a Baha’i building nearby, [or] any sort of church or temple or space that we could meet in,” she says. “There is a Baha’i center near Union Square, but that’s obviously difficult to get to from campus.”

But not every group has had to struggle as much to find spaces for meetings on campus. The Hindu Students Organization, for example, reported relatively clear lines of communication with the OUC and has benefited from the consistency of using space beneath the Chapel for Bhajans, or Hindu prayer meetings, on a weekly basis.

Hari Devaraj, a co-president of HSO and a senior in SEAS, says that the space works “perfectly.” “It has good acoustics and it's just big enough to feel kind of homely,” he says. HSO hangs blankets in the choir room and lights a small fire as the ritual aarti.

While he says that the group’s leadership has a good relationship with the University Chaplain, he also mentions that there was “a lot of back and forth” that occurred between the organization and OUC in order for the group to hold a celebration in Earl Hall on a Saturday, echoing Anand’s difficulty with booking space in the building on weekends.

Jewish student organizations that operate under the umbrella of Hillel do not face these space challenges. Hillel uses space in the Robert K. Kraft Family Center for Jewish Student Life, an $11.5 million building that opened in 2000 and was built through a partnership between Columbia University, Columbia trustee Robert K. Kraft, and the Jewish Campus Life Fund.

David Quintas, president of Hillel’s Student Executive Board and a Columbia College junior, says that a lot of the funding for groups within Hillel at Columbia comes from Hillel International, as well as other outside sources.

“I think overall we just feel incredibly lucky to have this space,” Quintas says. “We just have these incredible resources and this space to do so many things, and the sky can end up being the limit in terms of what kinds of events we put on.”

Both Reverend Sloan and Father O’Reilly emphasized the sentiment that St. Paul’s is supposed to be a space for everybody, regardless of their faiths. Father O’Reilly says that the inclusivity that St. Paul’s Chapel aims to provide is represented through the Nakashima Peace Altar. The altar, somewhat hidden on the right side of the chapel, was donated by George Nakashima, who met Columbia professor Theodore de Bary while de Bary was stationed at a Japanese internment camp.

“Part of it was just to be a lesson of peace, that there was a time when the Japanese and the Americans didn’t get along, but we can put our differences aside and no matter what faith you are, peace, harmony, justice, equality, liberty are sort of universal concepts,” O’Reilly says of the unpainted and intentionally cracked wooden altar contrasts with the strictly patterned tilework around it. “So that altar ... that’s sort of symbolic of St. Paul’s Chapel. It’s supposed to be welcoming for people of different faiths, that even though it’s named for a Christian saint. … It's meant to be for everybody.”

Have fun leafing through our fifth issue, and subscribe to our new weekly newsletter, As We See It!