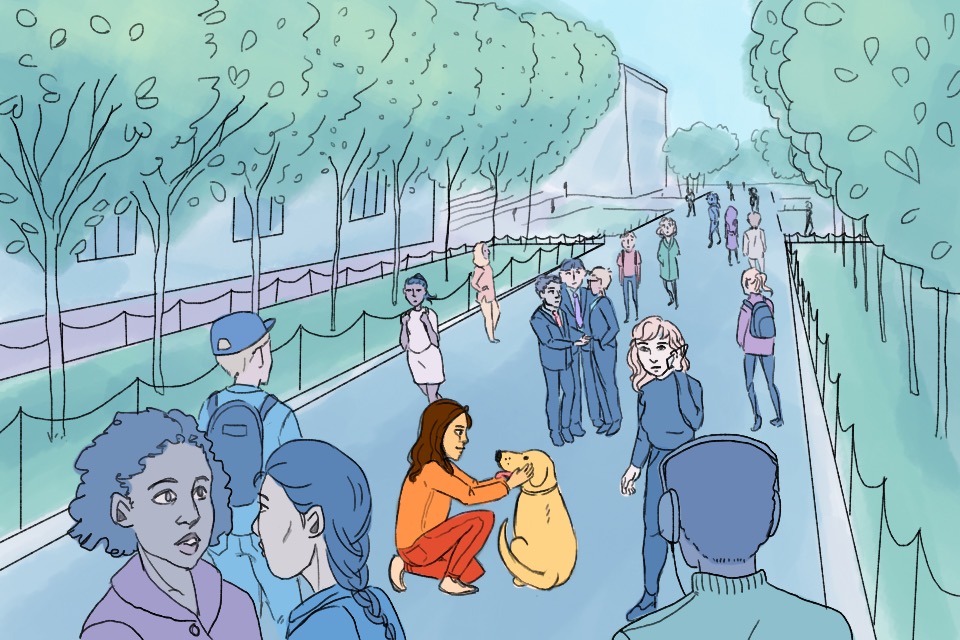 “They’re test tube babies,” my cousin said to me once of French Bulldogs, her dog Kiko’s breed, as we sat together over some holiday dinner. French Bulldogs have been bred since the 19th century, I learned. Male French Bulldogs are too weak to mount females, so the dogs have to be inseminated artificially, baked like pies in ovens.

“Why keep making them?” I asked my cousin.

“Because we love them,” she said, as she forked Kiko a chunk of meat from her plate.

Economic demand—or love, whichever term you prefer—has sustained an impractical and, if you ask me, rather cruel breeding practice. It’s a grueling business to breed affection.

I knew the train was approaching because the pressure shifted almost imperceptibly in the station. That, and Kiko became characteristically anxious. When we boarded the train, his paws skidded over the flooring, the sound waking a teenager wearing earbuds on the bench opposite mine. He gestured wordlessly toward the dog. For the rest of the ride, we sat together, his hand scratching the space between Kiko’s bat ear and his round skull until I led Kiko off the train.

New Yorkers have a reputation for shrouding themselves in self-imposed isolation, but a dog, bred for affection, changed the way people extended themselves to me. That is, they did.

I opened the apartment door into a whoosh of tobacco, a long wooden dining room table, house plants, and modern art. My cousin had employed me to watch over Kiko while she was in Los Angeles; someone had died, and she had been called to tend to the business of that death. Instead of money, I was given access to her apartment in TriBeCa, where, in her absence, I slept and bathed and tried on pretty scarves. The temporary lifestyle I lived in the downtown apartment was atypically decadent—enough to be my payment.

Kiko jumped into an oversized armchair he’d taken to—I called it his brandy chair. He resembled a loaf of Wonder Bread with legs. “Are you hungry?” I asked him. Kiko had no tail, only a stump, so I could never read him. He stood up, snorting gently—the music of ancestral inbreeding. I set down a bowl of food and he pranced over to eat it. When I got into my cousin’s large, still-made bed to fall asleep, he joined me at my feet.

I woke up the next day an hour before my class would start uptown, naïvely affording myself only 20 minutes to get ready, and stepped in a coil of shit getting out of bed. I would not make my class. I was thinking about dropping that anyway, I rationalized, telling myself I was relieved to have had the decision made for me. I spent that day comfortably, drinking loose leaf tea I found and reading about the Enlightenment for another class.

With few exceptions, I did most of my reading for school on trains. The distance between my cousin’s idyllic apartment and my own, about eight miles, made my task taxing. I spent money–about 40 dollars–to do a job. Plus, though MTA officers typically pretended not to see Kiko, it had recently become illegal to bring dogs onto the subway if they weren’t bagged (without going into detail, Kiko doesn’t like bags). I decided to bring Kiko uptown with me more permanently.

As I approached my dorm, I began to worry—I wasn’t sure about dog policy for students who did not require comfort animals. Kiko pulled the leash. I imagined he intuited my nervousness, but maybe he was just characteristically anxious, or cold from the rain that stung us on the walk.

Ceiling fans spun around electric heat in the lobby. A light flickered. “Who’s that?” asked the guard from behind a layer of protective plastic, pointing toward the floor.

“He’s my cousin’s dog,” I responded. “He has nowhere to go and it’s cold outside. I was hoping to bring him upstairs for a while.” I worried I would have to take Kiko somewhere else for the night, maybe ask a nearby friend for a favor. Going back downtown wasn’t an option; I couldn’t skip any more classes.

The guard looked at me like I’d confused him. “I just wondered what his name was,” he said eventually, extending an arm through the plastic for the dog to sniff.

Kiko extracted compassion from a community at Columbia I’d once equated with ambition, coldness, and efficiency. The strangers who had walked past me on campus now extended their arms to Kiko—and to me (though proverbially) by extension.

I opened my apartment door to a whoosh of browning flowers and warming onions. Louly stood in the kitchen with her boyfriend, Quinn, cooking dinner. Izzy crept out of our shared room and adorned Kiko in one of her scarves. Shumaisa sat typing with the tips of her long nails. Despite her compassion towards humankind, she looked at the dog and said, “He’s not for me.”

Once a houseguest, Kiko quickly took to peeing in front of my suite mate Louly’s door at about six each evening (Louly would habitually step in said pee shortly thereafter). I fed him from our plastic bowls—reserved typically for human food—to the disgust of some of my suite mates. Kiko cried when I left for my classes, Izzy told me, and didn’t stop until she lifted him onto her elevated bed—unlike mine, it was too high for him to jump onto himself. In class, I would receive photos of Kiko in Izzy’s bed with an inadvertent underbite. He required so much from everyone. From far away, that was endearing.

When I’d had Kiko for one week, I received a text from my cousin while I was walking him through Riverside Park: She was stuck in Los Angeles indefinitely with some “estate shit.” My suitemates had enjoyed a finite test period with a dog they could nurture, but I knew they would be uncomfortable with keeping him indefinitely.

There was nothing I could do as long as there was nothing my cousin could do, both of us uprooted by the business of taking care of something that could have seemed like it wasn’t ours to handle. After the springs of disaster, for each of us, came the deferral of personal obligation. Kiko entailed, for me, a reconciliation of compassion and myself. I can’t go home, I thought, looking toward my apartment building several blocks downtown.

My cousin contacted Henny, a neighbor who lived in her building. Though she’d been unavailable for the majority of the past two weeks, she could take care of Kiko now.

I boarded the southbound train. At the end of the car, a man had shrouded himself in a large cardboard box, only his boots with tall rubber souls showed. No seats were open, so I leaned on the door of the train when it closed—something you’re not supposed to do—and must have been distracted by a conversation between two Australian graduate students at Columbia. My fist loosened around the leash, and Kiko gained enough traction to sniff at the boxed man’s boot. The man stomped. Then again. The sounds his boots produced striking the floor silenced the rest of the passengers, and everyone looked over. Then, due to technical failings, the train stopped. I stood pressed as far into the door as my body permitted, listening to the groans of track construction, and Kiko sat on the shoe of one of the graduate students. I moved to pull him off.

Have fun leafing through our seventh issue, and subscribe to our weekly newsletter, As We See It!