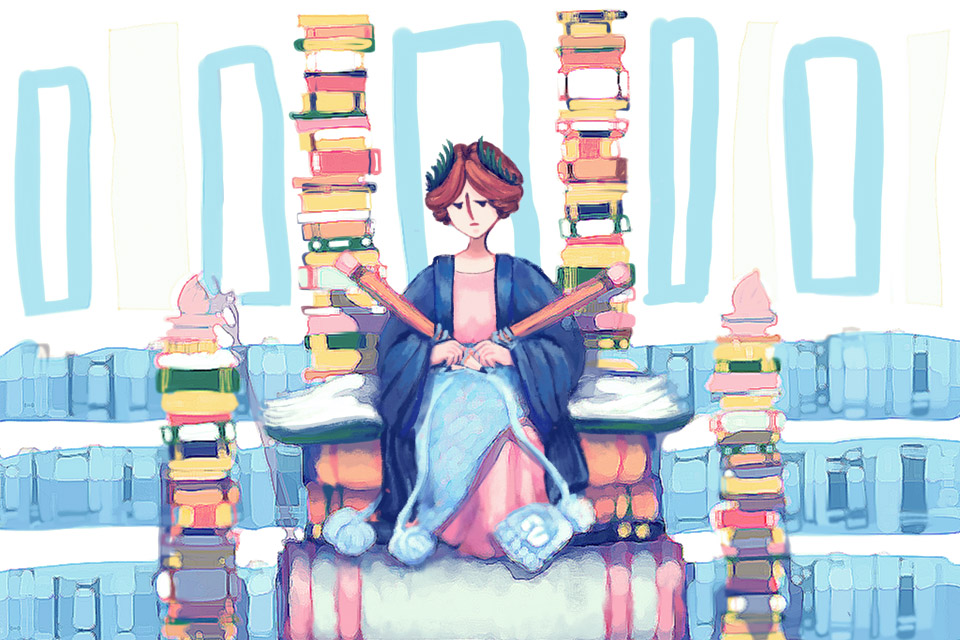 There’s citrus in happiness, I learn, and some bitterness. There is nutmeg in it, which makes it smell a little bit like certain holidays.

Duler is a junior at Barnard who owns a set of essential oils—four to be exact. She has lavender (relaxing), geranium (anti-inflammatory), and cinnamon (antibacterial—though she rarely uses this one). She also has happiness oil, the one she just pulled out of her backpack and offered to me. She sniffs the oils from time to time while she does her homework, typically at the desk in her Plimpton single. She enjoys drinking Yogi teas at the same time, basking in the light from her seasonal affective disorder lamp—which emulates the light of the sun—and the company of a plush Totoro, a rodent-like Hayao Miyazaki character given to Duler by her girlfriend, who lives far away, in France. Duler carries Totoro around in her backpack and to class when she has an exam; she believes the stuffed toy helps her to feel calm and to do well, and it reminds her of her girlfriend.

“I have these little habits that everyone makes fun of me, teases me, for,” she says.

Duler is not alone in her adoption of unusual work rituals. Many students at Barnard and Columbia repeat the behaviors they equate with relaxation, success, or happiness. I, for one, have taken to knitting a tangled ball of chartreuse yarn into identical rows while I plan my papers (the figurative parallel being that while I cannot organize my drafts, I can usually organize the yarn with some confidence). Working is sometimes about more than the work itself—it’s about how that work happens, framed by rituals we hold dear.

Columbia institutionally encourages work-related rituals with traditions like Primal Scream, a cathartic, blood-curdling scream that initiates the first day of finals at the strike of midnight the night before exams begin (one that had me concerned for the safety of my classmates while I prepared for bed in my first-year dorm two years ago). There is also Midnight Breakfast, a Barnard tradition, that also takes place during finals week, when students are served donuts, waffles, and scrambled eggs by administrators and, in the past, by former Barnard President Debora Spar late at night.

Individually or institutionally, these rituals calm us down and might even bring us success or happiness. They are done around work, but are not themselves work. And many of us, for somevalid reason or other, learn to need them.

Picture Steve Jobs on a stage. You see wire glasses, a black turtleneck, markedly unfashionable tennis shoes. Maybe he is gently touching his chin with two fingers for some reason—but it leaves the impression that he is thinking.

Now picture Steve Jobs sitting at a desk late at night, occasionally checking his email. He is developing hardware. He is frustrated. This image is harder to conjure because it is scantily documented. When we imagine Steve Jobs, we imagine him realized, basking in his success, rather than working hard—but he must have had to work at some point, right?

Psychology professor Michael Morris, who works within the Business School, has a name for this starry-eyed perception of notable people: He calls it “managerial mystique,” a phenomenon in which a limited understanding of someone’s behind-the-scenes work leads us toidealize them as divinely talented. Morris speculates that this idealization could result in the assumption that success stems not from hard work, but from the outward symbols we come to equate with it.

Psychologists are well-acquainted with this impulse to imitate models of success; it is one cause of these rituals around learning. Success itself can be too hard to imitate, so we latch onto how success appears—a black T-shirt or a beard. We conflate correlation and causation, wearing Jobs’ clothes like a Halloween costume rather than taking on his invisible work ethic.

Moreover, if and when we do find ourselves successful, we will likely repeat whatever work-adjacent behavior coincided with that success.

“There’s a term, ‘superstitious learning,’ that applies to a lot of these things,” Morris says. “You did something one day, and it worked, then you think that's necessary.” Superstitious learning doesn’t necessarily stem from an imitated behavior, though it can. It can also come from random actions that coincide with success, like Duler’s habit of inhaling essential oils or toting around Totoro before an exam. These activities were not necessarily deliberate choices Duler made, but, through repeated action, they have been integrated into her regular work routine.

Similarly, when Wally Larissa Baram, a Barnard first-year, performs stand-up in comedy clubs, she always wears a dress—any dress—with the same denim shirt on top. “I wore [the shirt] in my first show that I did really well in, and it just makes me feel particularly me,” she says.

Baram, like many of the students I talked to, did not rationalize the impulse to dress in uniform until I pressed her to. I found that the wardrobe was imitative; she says that many of the better comedians she’d seen perform had dressed similarly. “I think I was kind of mocking people that I admired,” she acknowledges.

The people Baram admires, often, are women in comedy. She took a gap year before coming to Barnard, during which she studied and practiced comedy independently, noting the qualities and practices of successful comics. She noticed a trend among female comedians who were well-received: They had the habit of wearing flannels on stage. Her denim overshirt pays homage to that tendency.

Baram, I learn with a few more questions, is extremely aware of the shirt’s emblematic value. “As a woman, one of the things that I was particularly curious about was how most women dress and who finds success,” she tells me. “Personally, I found the women who dress very provocatively are often hypercriticized by their audience. The women who dress more casually sort of have a more casual relationship with the audience.”

Wearing both a dress and a denim shirt allows her to balance emblems of femininity and masculinity, maintaining her own sense of authenticity while sporting the masculine item that the audience–mostly older men, she says–seem to equate with success.

Baram also paces before her shows, rehearsing her jokes obsessively, which have been meticulously and successively hand-written and revised in a series of three journals—another one of her work habits.

She wishes things were different. She wishes no one paid attention to anything but her comedy, and that subconscious conceptions of success were less restrictive. For now, though, she is bound by her rituals and by the prejudices of others.

I wonder at the legitimacy of seemingly superficial rituals like Baram’s: Is she actually performing better? Or does she just think she is?

In 2012, the New York Times published a piece about a study from Northeastern University on lab coats and embodied cognition: “If you wear a white coat that you believe belongs to a doctor, your ability to pay attention increases sharply.”

Morris says this effect is also an example of “anticipatory socialization,” or the process by which outsiders to a particular group tend to espouse the sometimes nuanced practices of that group with the anticipation of joining it. The wardrobe precedes the wearer.

With this in mind, Baram’s denim shirt might really be making her funnier.

Still, I ask Morris if there any detriments that can come from adhering too rigidly to rituals that seem to bring success.

“Certainly,” he says. “I mean, it can prevent you from learning the actual causes of performance.”

This can be even worse when the ritual itself has harmful potential.

Morris provides an example: “Generations of jazz musicians died early and were ruined because there was an institutionalized belief that to play like Charlie Parker, you had to be on heroin.”

And Baram’s wardrobe ritual may perpetuate, by little fault of her own, the misogynistic ideas that underpin it. Unlike many, she has the advantage of knowing this—it seems to me that the prejudices she is catering to have less power over her as a result of her awareness of them.

Coleman Cruz Hughes, a first-year student at Columbia College, makes it a point to stay away from harmful work rituals. For example, Hughes at one point found himself using his art as a type of stress relief. “It was the only thing that could quell my anxiety, which is an addictive dynamic.” He’s since made efforts to remove anxiety as an artistic impetus so as not to ritualize it.

“If you find that creativity is like a fix—something that’s the only thing ridding you of anxiety—that can’t be kept up forever, and it’s worth addressing,” he says.

Instead, he’s adopted a rather non-ritualistic, well, ritual.

During workdays, Hughes’ family home, located in New Jersey, is empty. His dad works, and his older sister has moved out. His mother passed away a few years ago. There, for stretches of time, hours or days, Hughes goes there to create his art.

In his most creative stages, Hughes says, “I get on a completely sun-independent sleep schedule. I just sleep when I get tired, regardless of where the sun is in relation to the Earth,” he says. His creative bouts “skew nocturnal,” though.“I’ve always felt that nighttime had a very attractive mystery to it. Also, it lended itself to solitude. People don’t text you at night—they don’t bother you,” he says.

For Hughes, there are no objects like denim shirts or essential oils. No pretentions I can see, except for a cool, almost painstaking tendency toward unaffectedness. Mostly, what Hughes needs in order to do his work is silence and solitude. Otherwise, he lets inspiration alone drive him.

There is an E.B. White quote that goes,“A writer who waits for ideal conditions under which to work will die without putting a word on paper.” Hughes seems to heed this—he doesn’t wait.

I think, does Hughes have rituals? His going to his family home to work, for instance, or having a “sun-independent” sleep schedule. Are these things rituals?

When I ask him up front, he says, “No. No ritual. Definitely not a conscious ritual.” Perhaps Hughes tends toward something unconscious instead—but something no less ritualistic.

Commenting on the consciousness of rituals and their meanings, Morris tells me about an Inuit community in Northern Canada that burns caribou antlers. The cracks in the antlers that form from the heat are read to indicate where the group should hunt next. For generations, this practice has proved successful.

Today, this ritual can be rationalized. “What a game theorist [who studies rational decision-making] would say is that you should randomize your behavior, because anything else becomes predictable and people can game it. But it's very hard to act randomly as human beings,” Morris explains. The Inuit tradition works because it ultimately randomizes their hunting behaviors more effectively than deliberate randomness can.

“A lot of things that we do kind of depend on that we don't understand how they're working,” Morris says. Sometimes, it’s better not to dwell on the workings of ritual—it works better that way.

Morris admits to me, as I begin to leave his office, that he wears the same T-shirt every time he flies—he had a good flight in it once. So he wore it again.

Have fun leafing through our Traditions issue, and subscribe to our weekly newsletter, As We See It!