Wrestling with Success at Columbia

Wrestling with Success at Columbia 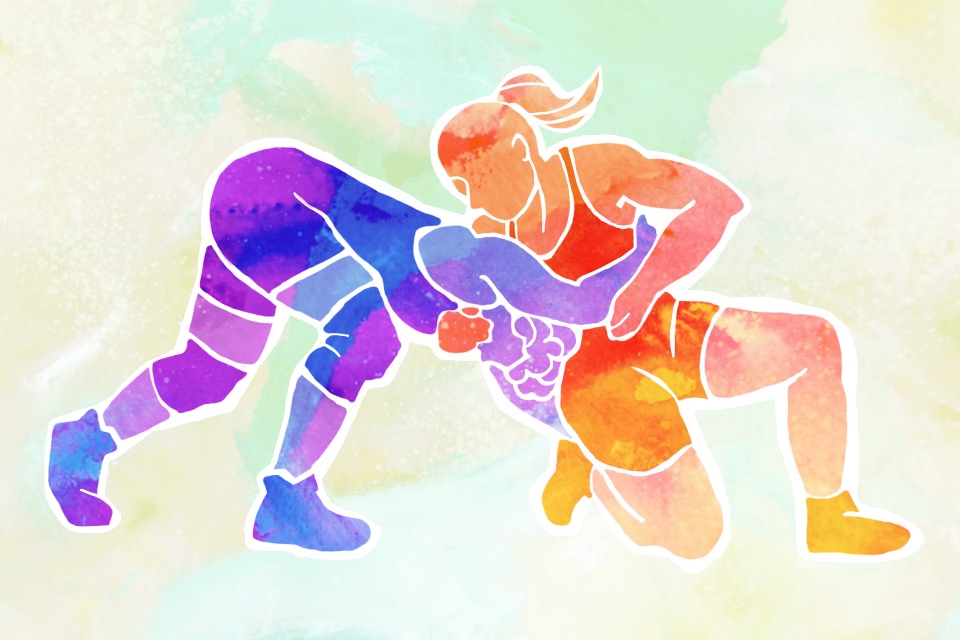 View From Here
By Lyric Bowditch

Going into my first year of high school in Cairo, the only sport that I—chubby, gentle, and overenthusiastically academic—had ever officially joined was elementary school Irish dance. “Athletic” had never even remotely applied to me.

Then I joined varsity wrestling.

It’s hard to say exactly why I decided to wrestle in the first place. I hated sweat and aggression and (gulp) exercise. More importantly, I had zero athletic—let alone wrestling—skills. As if that weren’t enough, I also learned that the previous year, there had only been three girls on the team of 20-something athletes—and most of the boys were (rather scary) seniors. So when my older brother Julius, a wrestler at the time, suggested I join the team, I told him that I would just embarrass us both if I tried to wrestle.

But, little by little, the idea grew on me.

Even at the time I considered myself a strong person, but my strength had always come from within. I wanted to really challenge myself—to dive headfirst into an unfamiliar, and frankly frightening, realm. By the November sign-up date in my first year of high school, I had made my decision. I signed up. Honestly, I was terrified. I had no idea what I was getting myself into.

The first few weeks involved a little vomit and a lot of tears. We had 10 hours of practice per week, during which I was slammed against the mats until I cried, did drills until I collapsed, and ran stairs until I threw up.

But by December of my first year, after only four weeks of practice, my attitude toward the sport had completely changed.

Never before had I been given space to fully exert my physical force—the adrenaline rush was unmatched. My sweat-soaked shirt became a point of pride, and over the weeks I could feel myself getting stronger. I was far from skilled, but I felt successful. While my attempts to execute the actual moves were still clumsy at best, I came to look forward to practices.

That first season, I ended up traveling to Dubai for the annual varsity tournament. My big brother won all six of his matches. Unsurprisingly, I lost all six of mine. It was awesome.

I moved away from Cairo in the 10th grade but returned my junior and senior years. I rejoined wrestling as soon as I could and relentlessly tried to recruit more girls to wrestle. By senior year, a third of our wrestlers were girls, and my wrestling abilities improved from pretty bad to solidly mediocre. I ended up winning four of my six matches at the tournament that year and earned the MVP award—more for my recruitment skills and enthusiasm than for my wrestling skills.

While applying to college my senior year, I knew that I wanted to write one of my college essays about wrestling. It was a defining part not only of my high school experience, but also of the woman I was becoming. In an application essay I told Barnard, “I’ve learned being successful isn’t about being in first place, or even about not being in last place. It’s about the experience.”

At the time, I really believed that was true. But things changed when I came to Barnumbia.

Despite loving wrestling so much in high school, I haven’t pursued it at all in college.

Since Columbia Admissions Representative Alec Milton came to Cairo to visit my high school in 2015, I knew that the University had a Division I sports program. Uncharacteristically intimidated, I didn’t even look for a women’s wrestling team at Columbia because I assumed that it—like the men’s team—would be varsity. And I assumed I wouldn’t make the cut.

I loved wrestling, but—unlike when I was in high school—I was afraid of making a fool out of myself as a first-year at Barnard. For the first time, I was at a place where everyone was the best at everything they did.

At Barnard and Columbia, it seemed to me that being successful was about being in first place.

Quietly, without me noticing, Columbia’s definition of success seeped into the unadulterated passion I had espoused in my high-spirited college essay. While I considered myself an unskilled but nevertheless successful wrestler in high school, I must have subconsciously decided that I could never be a successful wrestler in college—it’s the only way I can explain my failure to even look for the women’s team.

While afraid to wrestle here, I still felt loyal to the sport and attempted to remotely recruit new women wrestlers for my team in Cairo. “As intimidating as wrestling may be, I truly believe that it’s the best sport for non-athletes to join!” I told prospective wrestlers via Facebook Messenger. “It requires no particular body type. No hand-eye coordination. No equipment. Just your body, a mat, and determination!” I assured them. “Wrestling matches are one-on-one, so progress is very individual. You can be really bad and love it!” I promised.

While sending these messages of encouragement, I felt like a hypocrite.

In this environment, there is so much pressure for every step to be strategic. Why would any Columbia student waste their precious time and effort on an activity knowing they will only achieve mediocrity at best? An activity that would never end up on her résumé?

Until recently, I successfully internalized this Columbian philosophy, forgot about how much I loved wrestling, and was satisfied running around and around and around Dodge’s (weirdly short) indoor track for exercise. But just over a week ago, on the evening of March 29, that suddenly changed.

In the throes of midterm papers, feeling mentally overwhelmed, I had an intense urge to fully exert my physical force once again. I wanted to take someone down. I wanted to be slammed against the mats. I wanted to wrestle.

In that moment—overcome by a weird bodily intensity I’m finding difficult to describe—I didn’t care about being Columbia’s version of successful. I just wanted to hit the mats. I realized how crazy it was that I never looked for women’s wrestling at Columbia, and considered asking if I could practice with them even if I couldn’t compete.

Heart pounding and heavily panting, I hit the web. After a quick Google search, rather than finding the coach’s contact information, I found out that the team doesn’t actually exist. Columbia does not offer wrestling for women. (A shocking fact, which warrants a whole other article of its own!) Dismayed and furious, I hit Dodge and beat my fastest running time by 29 seconds.

Although I may not have the choice to wrestle at Columbia after all, my powerful physical outburst reminded me that I do have the choice to define success on my own terms. Our campus’s competitiveness is pervasive but not inescapable. I am still allowed to love doing things I’m bad at. So while I can absolutely blame the University for not providing me space to wrestle, I am also among the guilty for not even looking for a team until halfway through my second semester.

While Columbia’s environment may discourage students from pursuing passions, it also can provide students with an opportunity to healthily rebel and find their niche. My editor Rébecca is, in her words, “really bad at basketball,” but still plays for Columbia’s intramural team with pride “and spirit—so much spirit.” My friend Marina, an avid potter who describes her skills as “yikes!” even after almost a year of classes, joined the Barnard Clay Collective despite having no experience with pottery wheels.

And me? I can now say with conviction that when Columbia starts offering women’s wrestling, I will unashamedly try out for the team.

It hurts, and I’m terrible at it—but I love it.