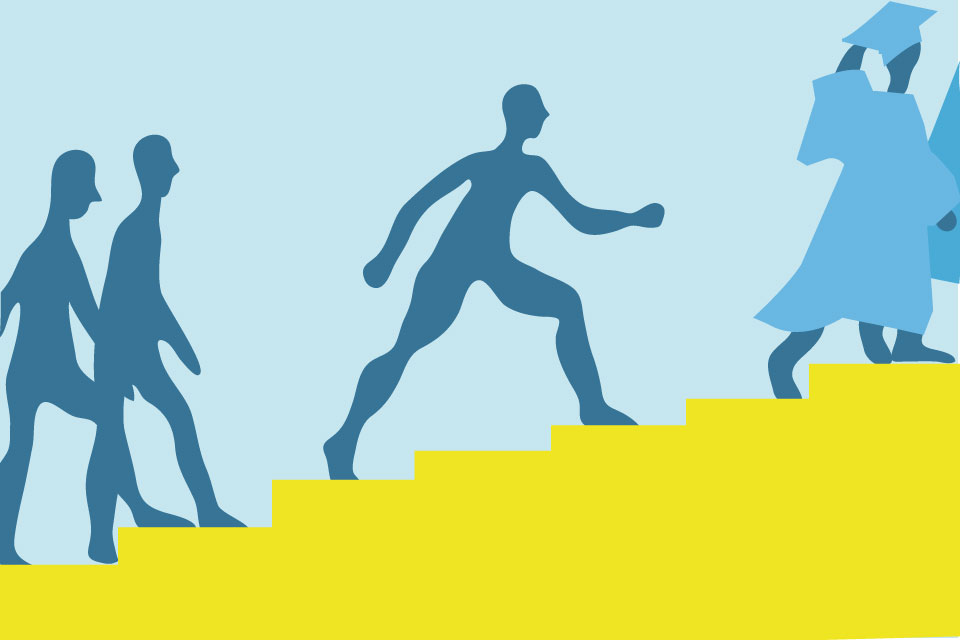 Open a new tab. (Wait, no, come back so that I can give you the rest of the directions.) Now type “graduating early Columbia University.” You can try modifying your search by making it a full sentence or even adding a question mark. You’ll get the same results.

Kunal Kanodia cites the disappointing Google results as a major obstacle in his path to successfully graduate early: “There’s no database, and there's no information for people who graduate early.”

Kanodia enrolled at Columbia College as a member of the class of 2018 but will be graduating in May 2017. Reflecting on the process of early graduation, he says, “There were just so many questions, and I kind of had to navigate everything by myself.”

Neither his pre-law advisor, nor anyone at the Center for Student Advising had answers for him, he said. Kanodia had to email a plethora of administrators to resolve simple questions, such as whether or not he was eligible to receive an award traditionally given to seniors that a friend had nominated him for.

“So am I a senior now? Am I graduating as a junior?” he recalls asking himself. “Practically all of the last year was just spent emailing lots of random people trying to figure out where exactly I stand."

Dean of Advising Andrew Plaa acknowledges this lack of available information. He insists, however, that the necessary information about graduating and graduating early are the same. What makes them different is only the amount of planning needed in advance. Plaa admits that making a webpage would be easy since it would answer frequently asked questions: “You’d have to contact your adviser early, know what you want to do, know your major early on, and plan accordingly.”

Plaa points out the infrequency of students graduating early—just a small portion of students choose to do so every year. In the past five years, roughly 235 students from Columbia College, 52 from the School of Engineering and Applied Science, and 212 from Barnard have graduated early.

To graduate, Barnard students must take 122 credits, Columbia College and School of General Studies students need 124 credits, and students in SEAS must complete 128 credits. Coupling the sheer number of credits with the specific Core or distributional requirements of each undergraduate college, graduating early could seem daunting and close to impossible. However, college credit accrued before coming to college is one way to get ahead.

Recent Barnard graduate Ava Kingsley came to Barnard with 22 Advanced Placement credits—over a semester’s worth. Originally, Kingsley would have graduated in May 2017, but she graduated a semester early to travel.

She has no complaints about how administrators dealt with her decision. She began planning to graduate in three-and-a-half years as early as her first year. In fact, Kingsley is grateful that the advising staff allowed 22 of her AP credits to transfer to college credit.

Students who take classes in the International Baccalaureate diploma program in high school can also arrive at Columbia College with up to 16 college credits, and at Barnard with up to 30.

Kanodia came to Columbia with 16 IB credits, so graduating early has been an easier endeavor for him. For the most part, he has taken four classes per semester, and this semester he is enrolled in only three. Since he took all of his Core classes during his first two years of college and didn’t have to worry about taking enough credits, he could graduate a year early while still easily fulfilling his major requirements and even taking separate electives.

As a General Studies student, Juliana Forrest came to Columbia with no AP or IB credits. In order to catch up on credits, she took courses over the summer and racked up 10 points. Forest works at the visitor center and plans to graduate early in order to save up more money.

Kanodia, too, is motivated by financial reasons, and he connects this to his critique of the opacity of the process. “There’s this fear of having to navigate this whole process on your own,” he says. “For me, [staying another year] was frankly 70K, so it didn't make sense.”

Although students do come to CSA with plans to graduate early, Plaa is not a big proponent of the choice. “I wouldn't normally encourage people to graduate early because I think, actually, that it diminishes the overall [college] experience,” he says, pointing to study abroad as an example of something that students who graduate early typically can’t participate in.

However, he acknowledges that students have legitimate reasons for cutting their time in college: “There are a lot of different reasons, but a lot of it is either an urgency to get on with their career[s] or often financial pressures that [cause them to] feel that they have to get this done within three years.”

Plaa speaks of a student from Singapore, for instance, with only a three-year fellowship, who was therefore forced to plan to graduate early from the moment they entered college.

The majority of the people that I spoke to had a job within the University and saw graduating early as having large financial benefits. But being someone who can graduate early is representative of more than just economics and the ability to acquire credits.

Forrest explains that she cannot stay in one place for too long. “I always sort of want to keep things exciting and switched up so I don’t get in a rut,” she says. She attributes this to her mom, who she describes as having the drive to move around even when it didn’t make logistical sense for her family.

Forrest finished high school early as well, in three years, in order to become a ballet dancer. Taking the non-traditional academic path is fundamental to who Forrest is. For her, it’s wrapped up in her identity as a General Studies student.

While Forrest’s non-traditional academic journey is common to her peers in General Studies, Evelyn Mayo's decision to graduate early follows a family tradition. She is currently in her third and final year at Barnard. “My sisterhood is very wrapped up in all this,” she informs me. Not only did Mayo’s older and younger sisters all do the full IB in high school, but they also took gap years, have attended or are currently attending Barnard, and are all graduating in three years. “Three for three,” she says.

Her international background also has an impact on how she thinks about higher education. Mayo is American but grew up in Singapore, and does not find graduating in three years strange or antithetical to the college experience. Although college is sold as a four-year experience, she thinks this doesn’t have to be the case. For many of her friends who live abroad, studying for three years is the norm.

“I really had to change my perspective of college being this linear track—that there are certain shared experiences that you have in each year,” she says. “You can have a senior spring your junior year.”

Both Mayo and Kanodia’s decision to graduate early were also influenced by the current global political situation.

Kanodia, who has a student visa, says that his ability to live in the U.S. will be precarious especially if the Trump administration implements policies that further impact immigration.

“Hopefully India won’t be one of the countries that’s banned,” he tells me. He explains to me that if President Donald Trump were to make changes to immigration policy that make it harder for foreign workers, it would be advisable to apply sooner rather than later for an H-1B.

For Mayo, who had initially considered graduating a semester—rather than a year—early, it was Trump’s rise to presidency that changed her mind. “Honestly, [with] Trump being elected I was like, ‘Nope, I can’t imagine being at school still. I think I really need to go and work,’” she says. Consequently, Mayo dropped her concentration and focused on only majoring in environmental science.

In her first semester of college, Mayo co-founded Divest Barnard, a student activist group advocating for the college to divest from fossil fuels. The campaign’s success was also a factor in Mayo’s decision to graduate even earlier than planned. If Barnard hadn’t made the announcement that it would divest from climate change deniers and investments in coal and tar sands, Mayo said she might have considered staying for another semester in order to keep fighting.

Amid all the unique challenges that graduating early poses students, isolation from being bonded with a class is something students might also struggle with. For Kanodia, the hardest part about graduating early has been figuring out which class he identifies with. He finds that he falls in a middle ground between his original graduating class and his new one. Although he’s included in all of the events for his original class, he’s not included in every senior event. “It’s this funny area where I’m definitely a member of 2018 still, but I’m also a member of 2017, and I feel like there isn’t that much clarity.”

Recently, the senior class had a dinner event in which students ate at a table with the people from their first-year dorm floor. Kanodia had to sit with the transfer students.

While Mayo has a sister who went through this exact process to whom she can look for guidance, Kanodia had to pave his own way all alone. "Having a community would have been awesome,” he admits. “I don’t know anyone else who is graduating a year early, but if I had known, we would have probably navigated alumni receptions together or gone to senior night together.”

I briefly joked with him that, after reporting for this article, I could give him connections. We laughed and continued the interview. A day later, no longer joking, he emailed me asking for contacts who are graduating early.

“I always thought that my Columbia acceptance letter was a mistake. I never thought it was real,” Kanodia says. To him, making the individual decision to graduate early and being able to accomplish that feat validates his capability as an undergraduate student—it taught him that he could manage taking the LSAT, applying to law schools, getting into law schools, and graduating early all at the same time.

“More than anything, it kind of helped me realize that I could achieve things just if I wanted to,” he says.

Have fun leafing through our tenth issue, and subscribe to our weekly newsletter, As We See It!