We Went To Dodge So You Don't Have To

We Went To Dodge So You Don't Have To 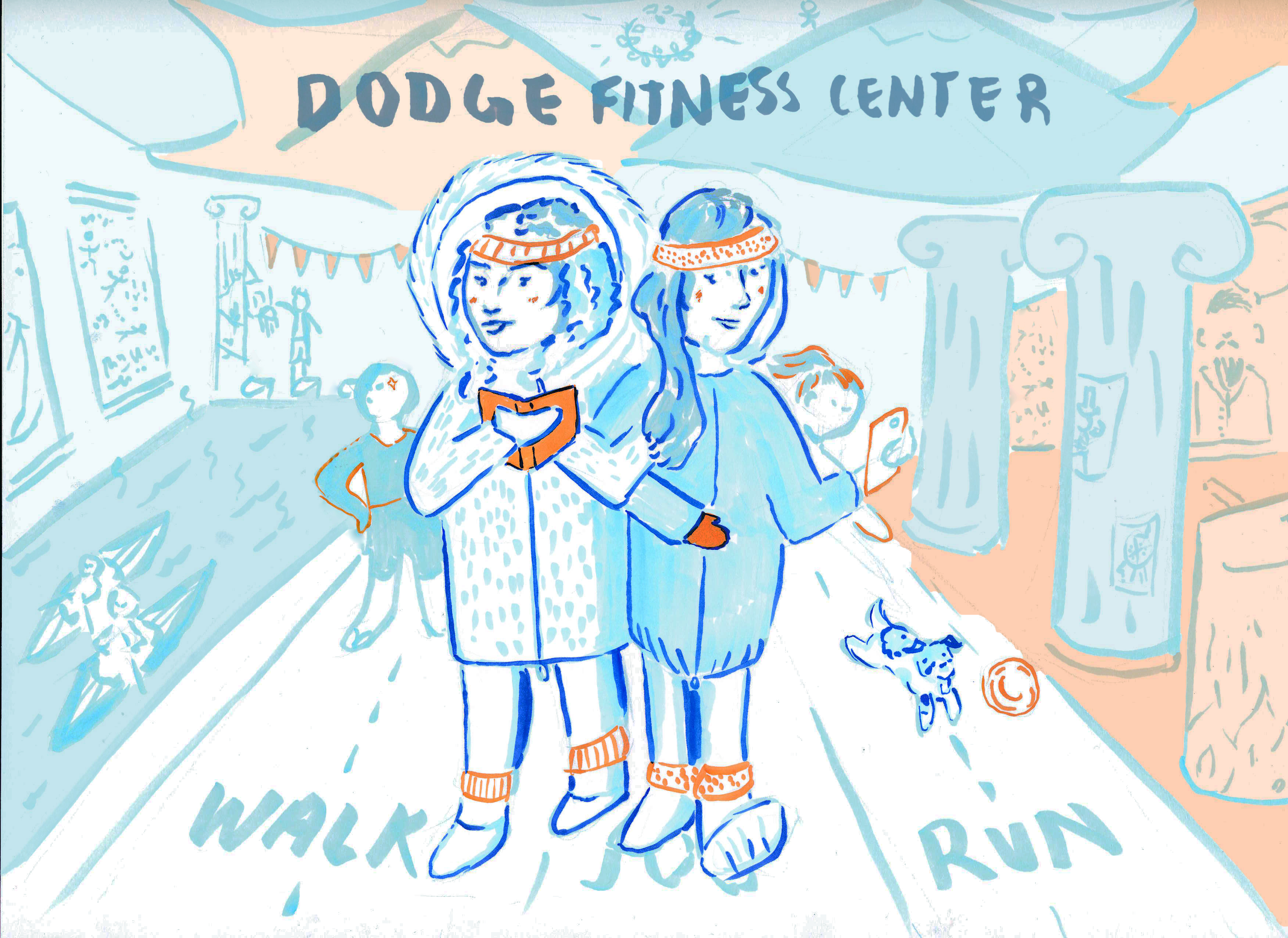 Welcome to first edition of The Eye’s Humor Column! Here, you will find the adventures of Jordan Allyn and Tessa Silverman as they scour campus to show you its oddest, funniest details. Today, the two of them go to Dodge for the first time ever.

Tessa:I’ve avoided stepping foot in our state-of-the-art fitness facility for the entirety of my time here at Columbia, and as a sophomore, I’ve done so for a year longer than Jordan has (suck it, Jordan). I know, you’re impressed. But it’s actually not that hard to do if you allocate your time strategically to sleep, eat JJ’s, and practice unproductive procrastination.

This assignment is perfect, then—I’ll go to Dodge for the first time in my life, and it’ll be to play the only sport I’ve ever been good at: watching people and judging them.

As we walk down the ramp to the entrance, a stampede of attractive, fit people pour out the front, but I won’t be intimidated. This is my Everest.

The entrance hallway is a liminal space in which a promotion for Papa John’s hangs on the bulletin board—10 percent off a large pizza—to weed out the weak from the strong. I, being a member of The WeakTM, probably would have fallen prey to the trap, but I spotting a balding old man I fundamentally relate to, I decide to follow him instead.

Jordan:I take the elevator down one floor. I am wearing a moss colored parka, and I do not plan on taking it off. It’s safe to say that I stick out among the crowd.

The sweaty aroma reminds me of my time at Chelsea Piers Summer Camp. Fun fact: One of my instructors there was such a good gymnast that he was an actor for that children’s movie—I can’t remember the name of it, but some of the characters were real people, and some of them were cartoons, and I’d watch it in my grandparents’ home in New Jersey. It’ll come to me.

Point is, the gym smells like a gym. So in terms of inspection, it gets an A plus in my book.

Tessa:Meanwhile, I check out the fourth floor, where there are a bunch of equipment rooms situated around an indoor track.

As you approach the track, there’s a sign that says, “Look each way for runners,” which, if we’re being real, seems a little optimistic about the velocity of Columbia athletes. I also notice that the three lanes on the track are designated “Walk,” “Jog,” and “Run,” but there’s no lane for “shuffle along while looking distractedly at phone,” so it’s not a track that I’m going to be using often.

It feels like a good place to start, though, so, ever the rule-follower, I look both ways and cautiously merge into the “Walk” lane.

After walking for about 30 seconds, I come across the crew room. I peer in, and at first I’m uncomfortable because I see two mostly naked rowers staring lovingly into each other’s eyes as they erg away, and it looks like they’re almost, like, getting turned on by watching each other row... but then I realize it’s actually just one rower and a floor-to-ceiling mirror.

I can’t say I’m shocked; last year, there was a rower on my floor whose room decor consisted entirely of a larger-than-life poster of himself, in a bathing suit, hoisting a boat over his head. I guess being the second-best team at the country’s worst sports school has really gotten to their heads.

Jordan: On the third floor, the walls are covered in blue plaques with white-lettered quotes atop images of lions. The quotes, however, are not from various famous talking lions like Simba or Aslan. Confusingly, they are from humans.

If Virgil can’t inspire me to fulfill my athletic potential, can anyone? I turn to my favorite NBA basketball player from the 1950s, Ed Macauley. “When you’re not practicing, remember that someone somewhere is practicing, and when you meet him he will win.” It’s just like that phrase, “It’s five o’clock somewhere,” which refers to the fact that you can start cocktail hour at anytime. Huh, now I’m thinking about alcohol. I wonder if the sports industry condones DUI (dribbling under the influence).

As I scan the remaining quotes, I can’t help but feel disappointed. Where’s the big inspirational quote that says that even though I failed at soccer, basketball, softball, and tennis, I still have a shot at being a competitive athlete?

A mysterious plaque booms at me, “Action without planning is fatal, but planning without action is futile.” OK, we’ve got a riddler among us. The source of this wisdom: Unknown. That plaque cost money.

Tessa:When I head to the third floor to take a look at the squash courts, I run into Jordan, who directs me to the motivational posters first. My personal favorite is the one attributed to Virgil. As it turns out, Virgil is actually the pen name of the Little Engine That Could. There’s also a quote from Abraham Lincoln, who we all know was a total gym rat.

Before today, I had always just thought of squash as a funny name for tennis in a box. But from here on out, it will forever hold a special place in my heart, because down here in these squash courts, I let my soulmate slip right through my fingers. As I walk out of a court that I almost just locked myself into, a boy with curly brown hair held in place by a sweatband as white as his pasty skin passes by, saying to his friend, “I’m culturally Jewish, but my family’s not religious at all.”

Jordan: Meanwhile, I journey to the first floor. I hear music. Logically, I follow it. The music guides me to the pool. When I enter, I am unsure as to what exactly I am looking at. Small humans are jumping up and down. Distracted adults are clutching onto cellular devices. I’m still wearing my winter jacket.

Remember the aforementioned music that caught my attention? Turns out it was the song “True Friend” by Miley Cyrus disguised as Hannah Montana. That’s my childhood. Hannah Montana isn’t even on the air anymore. Miley Cyrus has gone on to bigger and better things since, and I’m observing kids in a pool.

A father sits in front of me on the bleachers and attempts to take a picture of his child swimming. iPads are difficult to operate, though, and he accidentally turns on the front-facing camera. I am looking directly into the camera with a notebook in hand and my furry hood on. He presses the flip camera button very aggressively, as though he’s seen a ghost of his past.

Kelly Clarkson’s tune “Walk Away” begins. I take this as my exit song.

Tessa: On the second floor, I find the big basketball court where the actual student-athletes play. It is also where clusters of kids who played basketball in middle school like to show off their skills when it’s not in use (so as not to intimidate the varsity athletes).

I’m compelled to try to shoot a basket, which means that I have to ask a 9-foot-tall man to please stop shooting for one moment so that I can embarrass myself on Snapchat. After I set up at the free-throw line and do a couple of those practice dribbles that I saw Troy Bolton do in High School Musical, the Big Friendly Giant goes, “You should probably move a little closer.”

Fuck you. But also, good call.

I shuffle as close as I can to the basket without being directly underneath it, shoot, and, to everyone’s enormous shock, miss. My dreams of a career in the WNBA are dashed.

When I hand BFG back his basketball, his look of pity/confusion reveals that he thinks this was an insane attempt at flirting. He shouldn’t flatter himself—he may be tall and athletic, but he’s no squash-playing cultural Jew.

Having walked down at least three flights of stairs (and found an elevator to take me back up), I decide I’ve done enough exercise for the next few months and that it’s time to let Dodge be a thing of the past. I find Jordan to leave, and we walk back out the doors and up the ramp into the sunlight.

Bye forever, Dodge. It’s not you, it’s me. It just doesn’t look like this (*gestures to self*) is gonna work out.

Have fun leafing through issue 10, and subscribe to our weekly newsletter, As We See It!