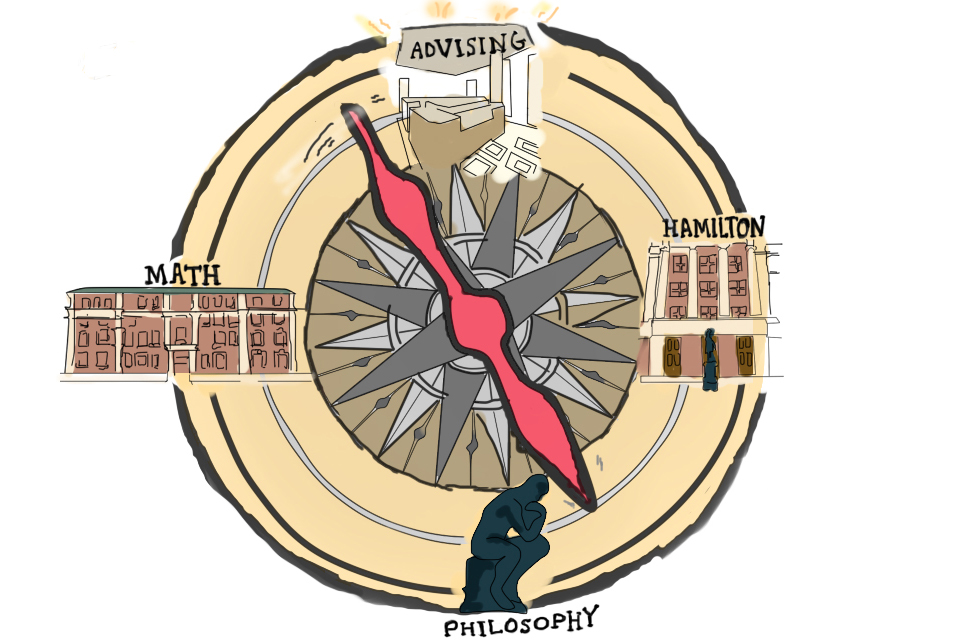 At this time last year, as my peers frantically made decisions about what institution they would be gracing with their presence for the next four years of their lives, I knew I would be attending Columbia, having been accepted early decision. In April, as Columbia’s Office of Undergraduate Admissions sent acceptance letters to thousands of students around the country, it also sent out hundreds of lesser-known letters telling students that they had been named scholars for the Columbia Undergraduate Scholars Program.

I remember a message from Columbia College appearing in my mailbox on a sunny day of spring break during my senior year of high school. I opened it immediately, frazzled—ever since receiving my acceptance letter in December, I had feared that the next time Columbia reached out to me, it would be to inform me that there had been a mistake—that I had not gained admission to their school, and I would have to attend another university.

So I was surprised to read the letter’s opening lines: “I am happy to inform you that you have been named a Kluge Scholar in the Class of 2020.” It turns out that my acceptance wasn’t a fluke, that Columbia wanted me—so much so that they had named me a scholar. I certainly didn’t feel like one.

I was curious about the designation, so I Googled it. I was faced with two sources: the official Columbia website and College Confidential. The former gave me plenty of fancy rhetoric; the latter, rumors and backlash.

Cayo Gonzalez, a Kluge scholar and first-year in CC, agrees. “When I first found out about it, it was very nebulous, and there was nothing concrete about it,” he tells me.

The description of the program in the letter I received during my senior year does sound “nebulous,” as Gonzalez puts it. It reads: “The program consists of a variety of activities in which scholars bond with one another; socialize with other scholar communities; connect with faculty, alumni and other guests; and explore the remarkable resources of Columbia and New York City.”

A lot of what I heard about CUSP before I arrived on campus suggested that it was merely a way of attracting top students to Columbia’s campus. I remember students posting on the Columbia Class of 2020 Facebook page asking whether the program was worth it or if it was really just a way of drawing them to campus.

For James Houk, a Kluge scholar and a sophomore in Columbia College, it was financial: “It was mainly the grant part of it that really ended up making the decision for me, and not so much the scholar and the being a part of the scholar's program,” he says. Houk tells me that the grant he received was so significant that he would not have come to Columbia without it.

But for Jason Mares, a Kluge scholar and a first-year in Columbia College, it was the “scholar” title that drew him to Columbia. “The idea of an admissions officer matching me to a certain title—and then reading up on the title and on what it was based—made me feel a connection with Columbia,” he says. I press him further to see how much impact this title meant to him. “I think even if I hadn’t gotten it, I still would’ve come to Columbia,” he admits.

Lavinia Lorch, director of CUSP, Chanda Bennett, advising dean in CUSP, and Andrew Plaa, dean of advising at Columbia College and SEAS, were quick to explain that CUSP administrators play no role in selecting the scholars, and that the entire selection process is directed by admissions. The program is intentionally selective in order to reflect Kluge’s desire to build a community of like-minded individuals, but Lorch emphasizes that for her, CUSP reflects the fact that everyone should have learning opportunities. While everyone at Columbia is hardworking, CUSP is designed for students “willing to go the extra mile,” Lorch says.

When I arrived on campus for the first time, I was in immediate need of a map. Still, I managed to find my way to the Journalism School on the first Monday of the New Student Orientation Program, where CUSP scholars gathered to attend the first lecture of our Distinguished Speaker Series. Walking into the room, I knew little more than what the CUSP website told me: “The CUSP Distinguished Speaker Series follows an intellectual theme that is the foundation of our year-long inquiry.” I learned that this year’s theme was “Navigation.” For a native New Mexican with only basic knowledge of New York City’s subway system, this theme felt fitting.

There were several interesting CUSP lecturers this year, from authors to professors to NASA’s principal investigator. My favorite lecture remains the first lecture that introduced us to “Navigation,” a talk by professor and author George Foy. On each of our chairs we found an autographed copy of his book, Finding North: How Navigation Makes Us Human. Foy suggested that I try navigating without a compass this year, and I left the auditorium reflecting on the lecture.

While these lectures were often stimulating, I found them harder and harder to fit into my schedule as the year progressed. Still, others believe that the series helps build confidence in an academic setting, including Hailey Winstead, a Kluge scholar and a junior in Columbia College. “I think that freshman year, because we had to go to the Speaker Series and we have to interview a professor in one of our classes, it made me more confident to speak to professors or to speak to important people on campus,” she says.

Winstead also felt that the CUSP events at the beginning of the year, like that first lecture I went to, helped with her transition to college. “There were small group events you had to go to, and it was another opportunity where you knew you could meet people doing similar things as you, but in a less weird way than all of NSOP,” she says.

Another important part of CUSP for first-years is the Columbia Journey Seminar. The syllabus describes the program as “anchored in the principles of community, exploration, and engagement,” and during these weekly meetings, we discussed New York City and Columbia. The discussions we had seemed to me comparable to the treasured conversations we sometimes find ourselves in on campus; it might be on South Lawn, or in John Jay Dining Hall, that a friend poses the question, “Who are we, and how do we define who we are?”, and everyone jumps in and gives a perspective, resulting in the feeling of communal intellectual appreciation.

CUSP provided “navigation” outside the themed lectures, too. I also acquired some geographical knowledge with CUSP. One of the mandatory programs included a Harlem tour. We walked through a lively block party, and at the end of our tour, we wound up at a café—our guide knew the owner, who so graciously offered our September weather-parched throats water and Coke.

Another benefit is the personalized CUSP advising system. My own adviser, Lavinia Lorch, is the director of the whole thing. Houk finds the advising experience beneficial too; he says he felt a more personal connection with his adviser, Chanda Bennett, due to her involvement with CUSP.

While CUSP was meant to offer this sort of intellectual benefit, to some, it also offered financial benefits. In the emails that CUSP sent out as the school year neared its beginning, financial aid was suggested to be one such advantage. Ivy League institutions do not give out merit-based financial aid, but CUSP provides funds for scholars. Its website states: “While participating in the Program may help you with your financial aid needs, all Scholars’ aid packages are determined on a case-by-case basis.”

Jessica Marinaccio, dean of undergraduate admissions and financial aid, says that CUSP students go through the same need-based process as any other student receiving financial aid: The financial aid office assesses each student’s ability to pay, and Columbia then offers grants to make up the difference. Students on financial aid have an earning expectation, but CUSP waives two years’ worth of work-study expectations. Winstead says that for her, having the work-study expectation waived by CUSP impacted her decision to come here, because she did not know what to expect from Columbia’s academics and having not to worry about working was important for her. Still, Marinaccio points out that a variety of different programs, like the Academic Success Program, can also waive the work-study expectation, and students can apply for exemption as well.

A critical component of CUSP, and probably its most beneficial feature, is its summer funding. In the second semester of any year, scholars are invited to apply for CUSP Summer Enhancement Fellowships. These fellowships can cover myriad summer opportunities, from independent research to a creative project to unpaid internships to low-paying or unpaid summer practicums. Lorch estimates that about 30 projects are done abroad each summer. These grants do not cover the full cost of a project, and they require a scholar to be “in good standing.”

Winstead applied and received summer funding for the last two summers, first working as an intern at North Carolina Guardian ad Litem, an organization that works with the Department of Social Services to appoint children with an open abuse or neglect case to a guardian. Last summer, she worked on a clinical trial at the Columbia University Medical Center.

Despite benefits like the Summer Enhancement Fellowships, many of the students I spoke with admitted to not being entirely satisfied with the program. They didn’t make lasting friendships through CUSP, and thought the big lectures and impersonal seminar classes made it hard to find community within the program. Both Mares and Houk mentioned that the image they were sold during Days on Campus at a dinner event for scholars did not match the reality of the program. “My expectations were a lot higher than what it actually is,” Houk says.

However, some students were excited by the financial and professional opportunities CUSP offered them. Gonzalez, for example, told me he went to the lectures because he enjoyed them, and that in the future he would look into summer funding and the CUSP Alliance—the student group that acts as ambassadors between the administration and the rest of the scholars. Winstead, a member of the CUSP Alliance, has been highly involved in planning events like CUSP’s annual Broadway trip.

On paper, CUSP embodies the scholar that we all ought to be—indeed, the scholar that we want to be. But I wonder what CUSP could do to improve the sense of communal scholarship and to encourage intellectual curiosity even when we do not feel we have enough time or effort to devote to it. CUSP strives to reflect the ideal of a college within an undergraduate community, and in practice, it functions as a model that requires constant dialogue to test out what works, according to Lorch.

Ultimately, though, students don’t feel like this is a unifying program, and each scholar’s experience varies. I have been on this campus for almost a year, but still I only know a handful of Kluge scholars, many of whom I met while researching this article. The letter I received naming me a scholar asserted, “The group of Kluge Scholars selected this year is a remarkably varied and accomplished one.” I believe it, but I can’t be sure, because I haven’t met too many of them.

Have fun leafing through our 10th issue, and subscribe to our weekly newsletter, As We See It!