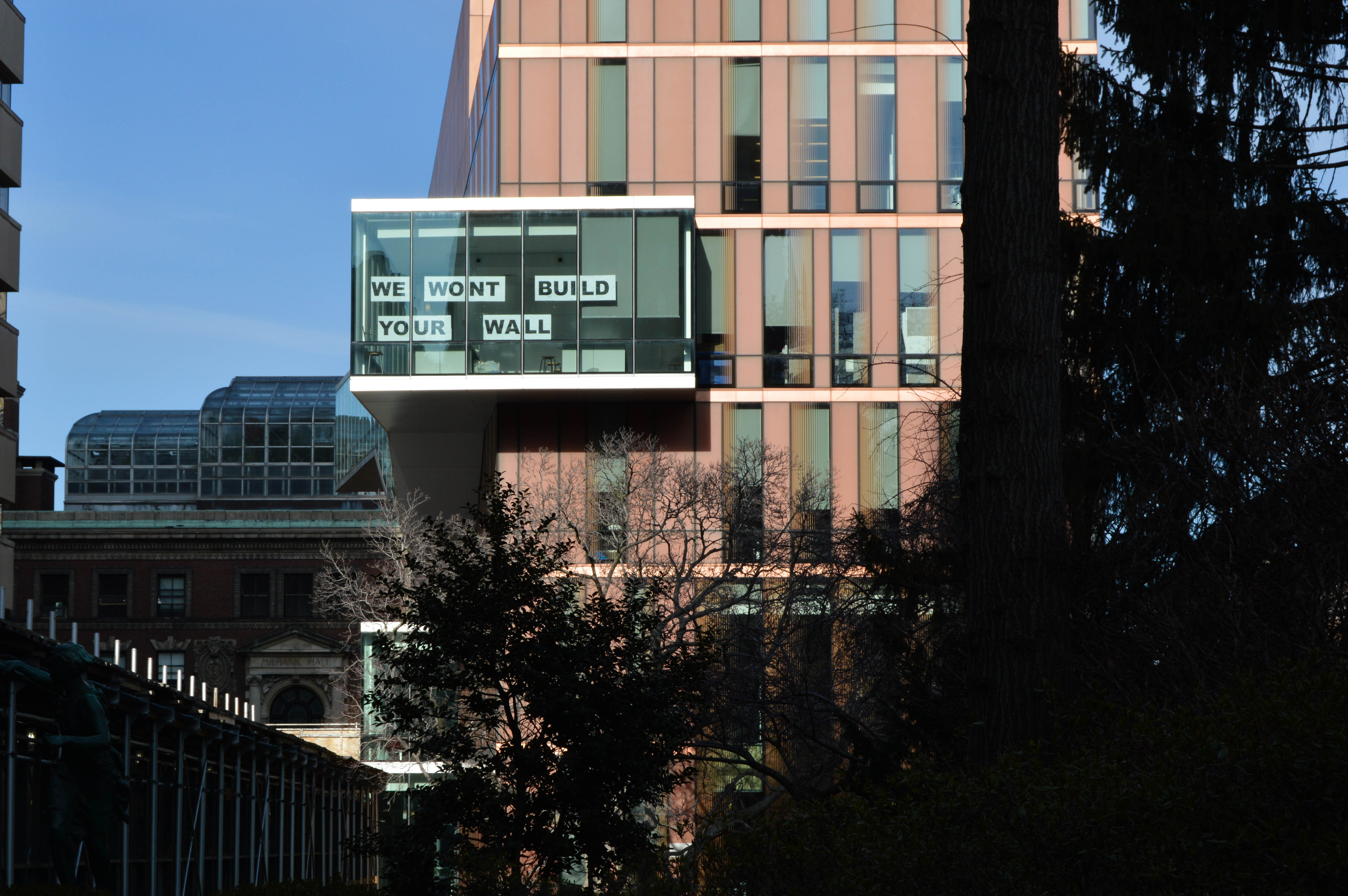 Sign posted from the windows of Barnard College's Diana Center.

During the 1968 protests, about 50 architecture students occupied Avery Hall to protest both the University’s involvement with the Vietnam War and—closer to home—Columbia’s plans for a segregated gymnasium in Morningside Park. For James Graham— the director of publications at Columbia’s Graduate School of Architecture, Planning and Preservation and founder of the Avery Review—these protests are a part of Columbia’s heritage.

To Graham, Columbia is, a natural place to discuss how architecture is a political tool rather than simply a service provided for development. As the Avery Review’s editor, he made a clear distinction between architecture and development in the editor’s note of January issue, “And Now: Architecture Against a Developer Presidency.” In the piece, the review’s editorial board critiques President Donald Trump’s prospective building projects as being “oriented around infrastructures of exclusion and deportation, on one hand, and bombastic architectures that monumentalize and engineer the concentration of wealth among the privileged on the other.”

Clearly, then, from the Avery Hall occupation almost 50 years ago to its conceptual separation of architecture from reckless development, GSAPP has a history of challenging how the University spatially interacts with upper Manhattan and Harlem. Today, architecture students continue to acknowledge political implications of the built environment, but the target of their protests has moved beyond Columbia’s administration. In the era of Donald Trump, students’ resistance has gone national.

One development in particular that architecture students have spoken out against is Trump’s proposed border wall between the U.S. and Mexico. Shortly after the executive order banning travel from several Muslim-majority countries was issued this past January, signs went up in the windows of the Diana Center and Avery Hall bearing the simple phrase: “We Won’t Build Your Wall.”

A.L. Hu, a third-year student in the Master of Architecture program, is responsible for the display at Avery. Hu explains that they were inspired by a banner hung at Yale bearing the same phrase. “I was sitting in [the] studio feeling like my projects didn’t matter,” they say. “I’m sitting here when I could be out in the streets or doing something better to help things get better.” To combat this feeling of helplessness, Hu gathered a group of GSAPP students to put the sign together to display in a window in Avery.

Manuel Shvartzberg Carrió, a Ph.D. candidate in architectural history and theory at GSAPP, points out to me that architects in private firms across the country are also actively resisting Trump through an ongoing initiative called #NotOurWall, which involves calling out firms and managers who have tendered for the border wall contract.

Carrió says that after lobby members called their bosses out, some lost or left their jobs. “Other members—because of those actions, taking them in an organized fashion—have reversed the positions of their firms,” Carrió says. “I think that’s amazing.”

But beyond the signs’ visual display of resistance, students, faculty, and staff have also worked together to organize a series of conversations centered around the Trump administration’s first 100 days in office.

Valerie Stahl, a Ph.D. candidate in urban planning at GSAPP, studies housing and the impacts of gentrification. At a discussion among GSAPP students and faculty titled “The First 100 Days: Day 64 - Dismantling,” Stahl spoke about the history of dismantling the welfare state and public housing. “This dismantling of housing, in particular in U.S. cities, is nothing new,” Stahl says, explaining that the U.S. Department of Housing and Urban Development has never been given enough resources to provide adequate housing for low-income people.

This history is inextricably connected to resistance in the Trump era. As the event page underlines, the talk considered not only the ways in which the new administration could dismantle valuable infrastructure, but also contextualized “what is at risk of being undone.”

Because architects have the power to both take apart housing and design structures that physically codify inequity and segregation, the need for people in their academic field to resist against complicity is especially urgent. “The more time you spend around architecture, the more you have to reckon with the fact that architecture’s always the mobilization of money, resources, materials, and power,” Graham says. “I think architecture is a deeply political art no matter how you practice it … but I think it’s the responsibility of the School of Architecture to help people be as alert to it as possible.”

Within the industry, a number of organizations—such as A-Frame, Queer Students of Architecture, Planning and Preservation (QSAPP), and Who Builds Your Architecture?—have developed to foster activism and critical dialogue amongst architects. These groups provide spaces for students and faculty to discuss social issues, share resources for research, and organize for political action.

While many architecture students at Columbia express frustrations with the complicity of their field, they also see ways in which they can use it for the greater good. “Finishing grad school was kind of like [a] resistance in its own way because it’s like, ‘I’m not giving up, I’ll get skills that can help in the future,’” Hu, who has devoted much of their studies to creating accessible places for marginalized communities, says.

Both Carrió and Graham have seen students engaging in entrepreneurial efforts to change the way architecture is practiced. For instance, recent GSAPP graduates Lauren Johnson and Ryan Day founded QSPACE in 2016 as both an architectural research platform and a supportive activist space for LGBTQ architects.

QSPACE is based within the GSAPP Incubator, located on the Lower East Side, which provides low-cost space and institutional support for organizations and companies founded by GSAPP alumni.

The heteronormative masculinity that exists in so many firms is also one of the reasons why Johnson, Day, and fellow classmates founded QSAPP when they were students. She refers back to an experience during a technical review when a member of the panel shouted, “Architecture isn’t for pussies,” a phrase that sounds easily like something our current president could have said in his role as a developer.

Johnson tells me that the environment is completely different from the architecture offices she learned about at GSAPP: She and other members of the Incubator are able get the resources to do the projects that recent graduates wouldn’t have been able to in traditional environments.

“It’s a totally different model, and I think there’s definitely space for the field of architecture to embrace different models of offices and labor and working because it’s so hierarchical and male-dominated,” Johnson says. By building a space that prioritizes collaboration and issues faced by marginalized groups, Johnson and Day are participating in their own entrepreneurial resistance.

Johnson’s experience is not an isolated one; masculinity in architecture is pervasive. Both Hu and Julie Pedtke, a third-year Master’s student in the architecture program, have experienced reviews in which entire panels were composed of older white men, and Pedtke says that it creates a strange dynamic. That said, Pedtke notes that many professors do make an effort to bring in more diverse review panels.

Violet Whitney, also a third-year Master’s student, came to GSAPP from what she calls a “very traditional architecture” program, where she was often assigned to draw plans for buildings that were essentially “beautiful modern-day luxury objects.” She says that she came to GSAPP to talk about the capital that goes into the building and the role of the client.

Both Whitney and Pedtke expressed interest in working in the public or nonprofit sectors, and they are currently organizing the school’s first career fair for like-minded students that’s focused on those two sectors rather than the private sector. Of course, this isn’t by any means an easy professional route to venture into—they expressed uncertainty with regards to how the Trump administration will affect public agencies and public funding for nonprofits.

Graham says that the election of Trump brought a new sense of urgency to questions that many in GSAPP had already begun to ask: questions of immigration, of spatial inequalities of cities, and of the role of capital in designing public space.

Carrió, Graham, and Stahl share an optimism that the Trump administration will cause more people to take notice of issues of social equity in architecture and planning. In particular, Stahl hopes that people will pay more attention to the role the state can play, and focus on reconfiguring the progressive movement to promote better policies.

Carrió sees an increasing number of architecture students trying to design buildings from a more holistic view by considering their funding and learning about capitalism in order to change it. “We can’t pretend anymore that the real estate system is in any way parallel or unrelated to the proto-fascist tendencies that this administration is demonstrating,” Carrió says.

Carrió believes that the existing organizations will only become more apparently relevant. “We were on to something, obviously,” he says. “Trump is really a symptom of a broader problem that we were already trying to tackle but has now become in a way stronger and more scary and more inescapable.”

Have fun leafing through our eleventh issue, and subscribe to our weekly newsletter, As We See It!