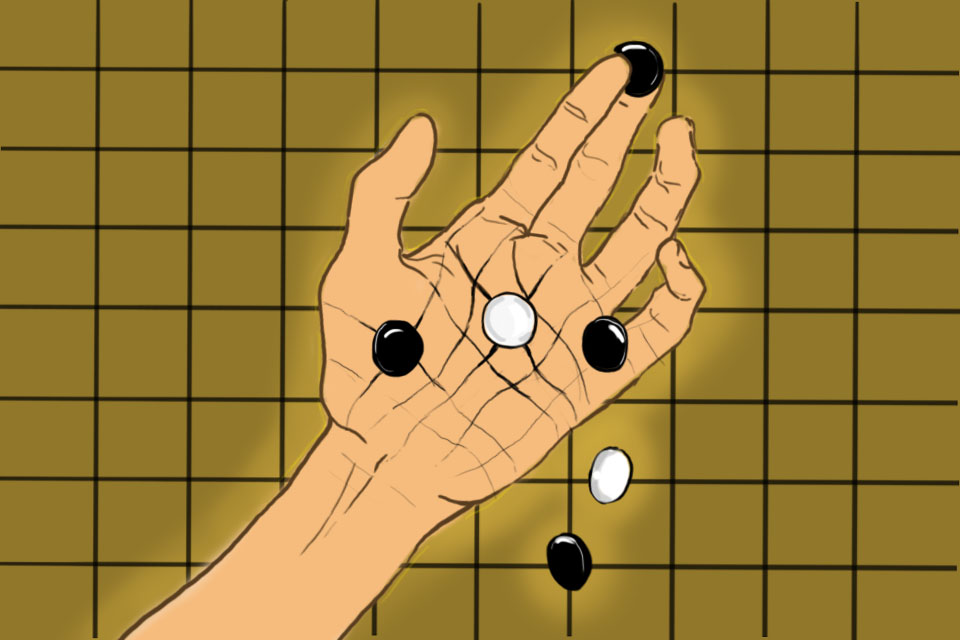 “You’re a Columbia student. How come you aren’t here every week? I want to interview you,” Peter Armenia says as I sit down at one of the Hungarian Pastry Shop’s cramped tables to interview him. Armenia is the president of Gotham Go Group, a group—unaffiliated with Columbia—that meets every Tuesday night at the Hungarian Pastry Shop to play a board game called Go. I have come here because Columbia, unlike every other Ivy League school (with the exception of Dartmouth) does not have a Go club of its own.

Go is an ancient Chinese game, created somewhere between 2,500 and 4,000 years ago. Like chess, you play either black or white and place your stones on the intersections of a 19-by-19 grid. Each stone is convex on both sides, not unlike a slightly larger Mentos mint. The primary goal of the game is to annex parts of the board into your “territory.”

When Armenia and I sit down to play a game, his style is erratic. He moves from one section of the board to another, approaching my pieces in seemingly random configurations. At first, I deal with these strange attacks calmly, but as I go on I start to fall into his rhythm and I begin to slip up. One small mistake builds on another and soon I’m forced to resign after he kills a large group of my pieces.

Armenia doesn’t remember me, but we actually first met five years ago at the 28th U.S. Go Congress in Black Mountain, North Carolina. As its organizer, Peter Armenia was a name that seemed to float around the convention. If anyone had a question about the event, the answer was always, “Go ask Peter Armenia.” He was always Peter Armenia—never just Peter. He was a pillar of a community that most people do not know exists.

I learn from Armenia that there used to be a Go club at Columbia. “When we first started there was some folks meeting there. 2011, 2012, there was a small group. They met on certain nights for a year or two, but then it seemed to fizzle because someone probably graduated.” Unable to find a single trace of it on campus or online, I feel like I am tracking down the ghost of something that may not have ever even existed.

Armenia gives me 19 emails of people who might have been involved with the club. But when I reach out to them, only four respond. Of those four, only one knows that the club had ever existed. Yingzhi Qian, a graduate student who studied statistics at Columbia from 2011 to 2012, replies in two terse sentences: “I wasn’t involved. Basically no one really went and the Go club died.”

Unlike a lot of other nerd subcultures where some members participate more out of a desire to be part of a community, it seems to me that people are rarely drawn to Go for a sense of kinship or belonging; the reality is that for most people today, playing Go is a solitary act that happens over the internet more often than in real life.

Strong Go players also feel this way. Yunxuan Li, a sophomore at Cornell, a U.S. representative in the 2013 Samsung Cup World Baduk (Baduk is another term for Go) Masters Championship, and captain of his university’s Go club, points to the game’s long history as a reason for why it should be played offline. “Just the feeling of the stones and having a real person in front of you, I think that’s how the game actually should be,” he explains. “Because when it was invented, there was no internet.”

Whether you are playing in a tournament or in a pickup game at the Hungarian Pastry Shop, these physical games are played in standardized test-level silence, often devoid of any kind of banter.

However, there are many challenges to creating a space in which these intense games can be played and a love of Go can be shared. The lack of players usually results in a very small group of people working hard to teach Go to a broader population.

And when it’s played in a college group, the club often dissipates once its members graduate. Antonio Martinez, a recent Yale graduate, started the Yale Go Club in the first semester of his senior year knowing that it would be challenging to find people to keep the club alive after he graduated. Thankfully, he found a student younger than him to be his successor.

It is clear that to keep a club alive, you need dedicated people. Rick Mott, the organizer of the Princeton Area Go Club (formerly the Princeton Go Club until a dispute with the administration caused them to split from the university last year) continues the club’s long legacy. Princeton Go Club was formed in 1945 by Ralph J. Fox, a prominent mathematician at Princeton’s Institute for Advanced Study. The club was famously featured in A Beautiful Mind—both the book and the movie—because John Nash, the famous game theorist and subject of the story, was involved with the club for over 30 years.

So playing in person really makes the game. In fact, as an eight-year-old, a main draw of the 28th U.S. Go Congress in 2006 for me was the opportunity to sit across from a live human being and place real plastic stones on a bamboo board. On a real board, you get the sense that something magical is happening.

I think the closest I ever go to grasping this higher level of understanding before entering my Go retirement was in North Carolina where, surrounded by tournaments, real boards, and ample human players, I was finally able experience Go “how the game actually should be”—I could finally create. As your pieces chase each other, making patterns and shapes, you feel as though you are not just playing, but creating—an experience worth flying out to North Carolina from where I’m from in Connecticut.

In many ways, the fizzling of the game at Columbia mirrors my own diminished interest in it. Despite a semi-fanatical devotion to the game from the ages of eight to 12 years old, Go faded from my life, pushed into some corner by the academic and social responsibilities of middle and high school. Somewhere in the shuffle of adolescence, I lost the part of me that was willing to sit in my room for hours, playing a board game against random people on the internet.

At the peak of my Go playing—around the summer of eighth grade, the same year I went to the Go Congress—I was a five kyu, a term which denotes rank. On the Korean Go Sever, where I played, this fell solidly in the middle range for registered players, according to data from 2010.

I was and continue to be an unremarkable Go player who, due to a lack of natural skill, access, and time, will never be able to become more than a dilettante. But there continues to be a mystique about the dan-level players (a designation roughly equivalent to a black belt in karate and a mark of advanced proficiency); more than anything, I want to be able to look at the Go board and see what they see.

It wasn’t until I got into Columbia that I remembered my interest in Go. Much like other first-years getting to college, I thought of this as an opportunity to get back in touch with forgotten passions and hobbies. I figured that Go would be included in one of the many niche interests encompassed by Columbia’s self-proclaimed diversity (and large Asian population).

But I couldn’t find a Columbia Go club on the activities list.

This led me to search online for Go clubs near Columbia, and I fell upon the Gotham Go Group. Before I knew anything about John Jay or Ferris, Carman or Furnald, I knew that people met every Tuesday night at a little café called the Hungarian Pastry Shop to play Go.

In a lot of ways, Columbia’s lack of a Go club seems to be characteristically Columbia. When I applied to Columbia, I wrote an essay about how I valued Columbia’s lack of “school spirit” and—ironically—the students’ independence, their ability to pursue their passions off campus. But now that I actually am at Columbia, I still feel drawn to that experience of sharing a game of Go with someone I’m friends with first and a Go player second.

I eventually answer Peter Armenia’s initial question, explaining that I often can’t make Gotham Go Group’s Tuesday night meetings because I have a busy schedule the next day. Unconvinced, he insists, “Have a bunch of classes Wednesday? Get your work done Monday.”

Despite being somewhat unsettled by his directness, his insistence helps me realize how my attitude towards Go has changed. As much as I claim to be excited to play Go at Hungarian, it took me over a month from the beginning of the New Student Orientation Program to go for the first time, and after that almost another month to go a second time. I still love to play, but Go will probably never be the priority it once was. That doesn’t mean I can’t make space in my schedule to play once a week, though.

When I ask Armenia why he thinks Columbia has never had a successful Go club, he gives me two reasons. For one, it’s the same four-year turnover problem that other Go club founders told me about. He recommended getting a faculty member involved who can weather the cycling students.

His other reason? It’s a simple answer, but to me it sounded more like a challenge: “It’s because you haven’t started one.”

Have fun leafing through our NSOP issue, and subscribe to our weekly newsletter, As We See It!