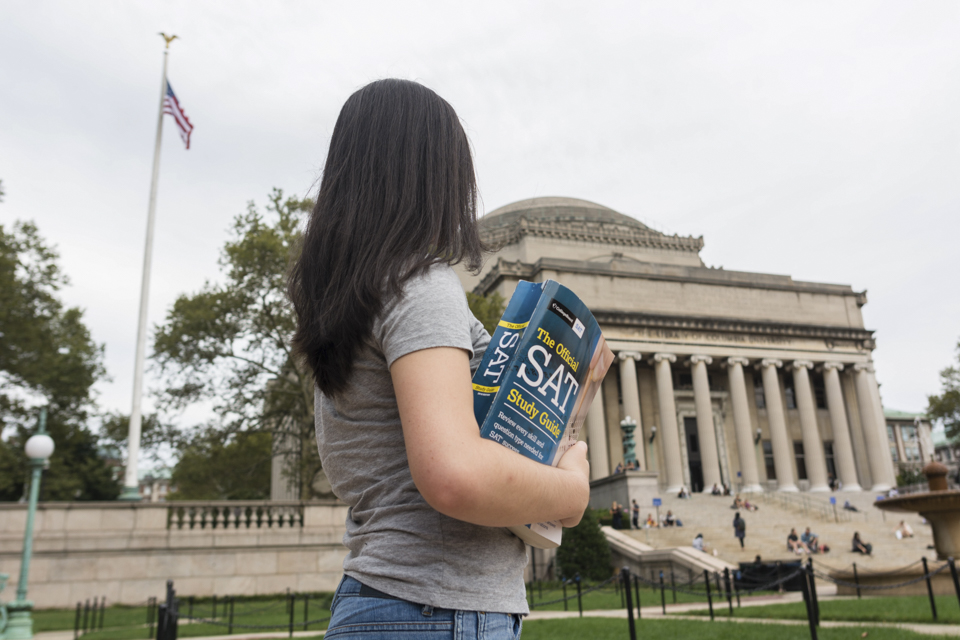 Clara Monk’s students can see her, but she can’t see them. Looking into the green eye of her webcam, she greets the ten high school students who have logged in and are awaiting instruction. Her only evidence that they are there, and that they are listening, is the stream of messages pinging in the group chat.

Monk, a sophomore in Columbia College, is an SAT tutor at Veritas Prep, a company that offers standardized test instruction and admissions consulting. She spends hours on weekends teaching sine, cosine, and how to beat the clock, alleviating the anxieties of ambitious students— some preparing as early as the eighth grade—and their parents, for no small cost.

Sitting across from me, Monk relaxes her impeccable posture for the first time in half an hour to recount, in the sheepish, nostalgic way one might share any mortifying college experience, a time when she lost internet connection for 15 minutes of a lesson.

Monk recalls apologizing profusely into the microphone when she finally regained the connection and frantically scrolling back up through the messages her students had left her. One message struck her the most: “And this is what I get for paying so much for this tutoring!”

Monk is one of many Columbia students who immerse themselves in the high-stakes world of tutoring, drawn by the ease, availability, and pay. Classes at the company can cost nearly $900 for 10 sessions. The demand within communities of well-to-do Manhattan high schoolers means that there is no short supply of lucrative, temporary tutoring gigs for Columbia students looking for part-time work to fund their personal expenses and ever-rising tuition. The sprawling, ballooning industry clocked in at roughly $11 billion in the United States in 2015.

Victoria Wang, a junior in the School of Engineering and Applied Science, is one such student. Twice a week in her sophomore year, she commuted to the Upper East Side to tutor a high school junior in preparation for the SAT. She describes the perception of disadvantage in the test-prep culture of affluent environments, where not having an expensive tutor seems to put you at the back of the pack. It is a culture that shepherded her through her own college admissions process. She comes from Silicon Valley, where “everyone got test prep.”

When they sign up for tutoring, parents expect success that will directly correlate with cost. “You can’t really control another human being, right?” Wang says, with sudden seriousness. “But in a way, I was, because her parents were paying me so much money in the expectation that I would help her.” Wang’s $70-per-hour job paid too well to fail.

Monk is also well compensated, but for her, it is necessary income. Veritas provides double her hourly wages as a work-study employee, as well as the possibility of weekend hours and raises. She can even earn bonuses for new student recruitments, or a five-star Yelp review that mentions her name. “[This is] just how I can afford Columbia!” she says, laughing.

The Columbia tutor, it seems, has many faces. Some dip their toes into the shark pool of test prep to become more financially independent from their parents. Others, like Monk, for whom part-time work is necessary in financing their education, become more invested. The financial needs of the tutors, then, contrasted with the apparent wealth of those who can afford to receive their services, further confounds the tutor-student relationship. Audrey Chang, a sophomore in Columbia College, relates her experience as a tutor for the Ivy Team, which advertises itself as a “College Concierge” service.

Like Wang, Chang tutored a student on the Upper East Side during the winter, when the hour-long commute was at its worst. She would take the train to 96th Street, transfer to the crosstown bus, and walk for 15 to 20 minutes, sometimes bombarded by cold rain or snow.

Chang’s description of her student sounds like something out of Gossip Girl: The student, routinely accompanied to and from yoga by an escort, would wait for Chang in her apartment complex, complete with doorman and, allegedly, butler.

Chang discloses these details as if they are glamorous rumors about a life she cannot fathom. She admits that, if she were to stop tutoring today, she would continue to live comfortably. 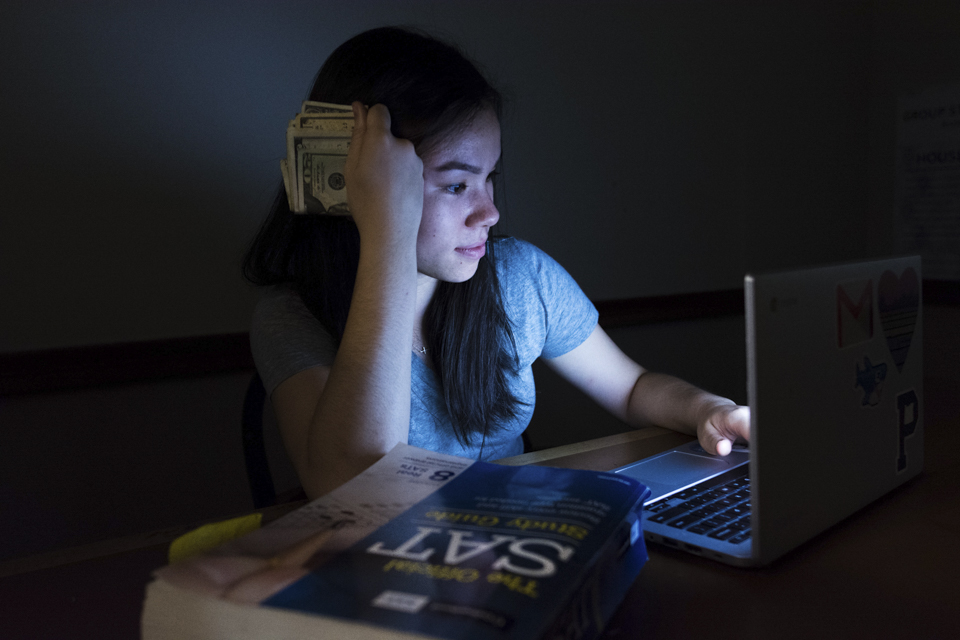 Student tutors, though they may face a spectrum of personal socioeconomic challenges, can rely on generous compensation for their time and energy otherwise allotted to their own student obligations. In return, their students enjoy a certain peace of mind. In the profitable game of tutoring, the people who lose out aren’t the ones who participate in the transaction—nor its cleverly marketed, online broker—but college applicants from low-income backgrounds.

“I guess I’ve never thought about myself in aiding that,” Chang tells me when I bring up these disparities. Many Columbia tutors, darting between the privileged corridors of Columbia’s campus and Manhattan’s wealthiest teenagers, are not confronted by the severity of the problem to a degree that might outweigh just how attractive the opportunity seems.

No one is more aware of this inequality than Chabely Jorge, a sophomore in Columbia College. When I ask if she has ever considered for-profit tutoring, she rolls her eyes. “I don’t profit off of this name,” she says, speaking of Columbia and its Ivy League branding. Instead, she has devoted long hours since February volunteering as an advising fellow at Matriculate.

The promises Matriculate makes are similar to those you might find on a tutoring website: “All the Best Students to the Best Colleges,” announces the header. But Matriculate is not for profit, and the organization connects students from disadvantaged backgrounds in rural areas and small towns to current students at competitive, affiliated colleges and universities, among them Howard University, Yale University, and Princeton University. The Matriculate Fellowship, as it is called, launched at Columbia in 2014.

As a benefactor of a program similar to Matriculate that connected her to internships, and as the first in her family to attend college, Jorge has been an advising fellow to four high school seniors for nearly eight months, guiding them through the college admissions process. Through video calls, she provides resources they would not have access to at their schools, let alone through a for-profit college prep service, by instructing them on how to draft effective college essays, put together a résumé, and make sense of financial aid materials.

Jorge describes how she moved from one school in her home community at the border of Washington Heights and Hamilton Heights to another in the Financial District. At Millennium High School, where the student body population was well-off and predominantly white and Asian, she had access to college counselors that her peers from her home community did not.

However, there was a striking difference in available support systems that she and her friends at Millennium had access to at home. “I couldn’t ask my mom to fill out the FAFSA for me,” she explains, as her mother is a first-generation immigrant who doesn’t speak English as a first language. Jorge wasn’t born in the United States, either. While other students could rely on their parents for help figuring out their finances, she had to teach herself financial literacy.

Jorge runs through the different barriers that low-income students face that are largely due to misinformation: not knowing they’re eligible for fee waivers to submit their applications, and what courses of study are available to them. One student intending on becoming a veterinarian, she remembers, thought she would be studying veterinary medicine after graduating high school. “I was like, ‘No, no, that’s graduate school,’” she recounts. “‘We’re doing undergrad now.’ And she didn’t understand the difference.”

“That was the moment I really cherished what I was doing,” she concludes emphatically.

I think back to my conversation with Monk, the Veritas Prep tutor, where I asked how she felt about being part of an industry which distributes opportunity in such unequal ways. She spoke deliberately throughout the interview, but at this point, struggled to find her words. “There’s definitely a certain level of,” she begins. “I don’t want to say ‘guilt,’ but ‘tension,’ in being paid a lot of money to tutor, and using my privilege as an Ivy League student.”

She told me she intended to do volunteer tutoring while being a student at Columbia, just as she’d done in high school. But she couldn’t find the time to. As a ballet dancer and full-time college student, she needed to spend her free time earning extra income.

Monk tells me that her students’ hard work is helping them get ahead. “One of the reasons that these [services] are so successful is because it forces students to put a lot of time into SAT prep.” She also noted that the tutoring materials are openly available on the Veritas Prep website for anyone to use for free. Self-study is indeed possible, if you know where to look for it.

Data from the College Board confirms Monk’s claim, at least in part. According to an analysis of SAT scores in May of this year, 20 hours of using the free Official SAT Practice on Khan Academy, a nonprofit education organization that provides free online tutorials, translates to an average score gain of 115 points, double the average score gain compared to students who don’t use Khan Academy. Furthermore, the newly redesigned SAT administered in March 2016 is “more aligned with material students are learning in school,” according to the College Board, making prep services’ “teaching to the test” methods—the fast food of education—obsolete.

The fulcrum upon which teeters the premise of tutoring services, then, is not the strength of the effect it might have on an individual, but one’s perception of what is possible.

“Take your best shot at getting into a top-ranked college. Get the SAT score you know you can achieve,” croons the female voiceover of a Veritas Prep promotional video. The website knits together a security blanket of slogans to help the most privileged 2017 college applicants negotiate their low self-esteem with high expectations. Once the humble brainchild of two Yale students in their New Haven apartment, today it is a rapidly growing global corporation. “For high achievers, by high achievers,” it promises. “Your success motivates us.”

The name itself, Veritas, isn’t just a Latin word meaning “truth”—it is most famously associated with the motto of Harvard University. This branding is what makes for-profit tutoring and college preparatory services like Veritas Prepso successful.

Jorge managed to navigate the college admissions process on her own. “Everybody was rooting for me to get into an Ivy League school because they’ve always thought that I could,” Jorge tells me firmly. She talks about the pride that comes with her status as the student of a prestigious university back home and being the only Columbia student her mom’s colleagues seem to know.

But many low-income students do not begin with this confidence, and still they must overcome the despair over seeing a $72,000 dollar price tag, and ride the learning curve to find out that, with financial aid, the cost can be much lower than it seems.

Monk’s positive experience working for Veritas, she said, strengthened her desire to use her degree in financial economics and concentration in business management to go into education or college counseling. She has thought of eventually expanding tutoring into her own business.

I picture her in front of her laptop again—Saturday morning, hair tied back, her serious stare into the single green eye. She is reaching much higher and further, into her future, than one can know just by watching her, even if she now describes her job as feeling, sometimes, like “speaking into the void.” A confession with no consequence.