Three Years into the Fight for our Union

Three Years into the Fight for our Union 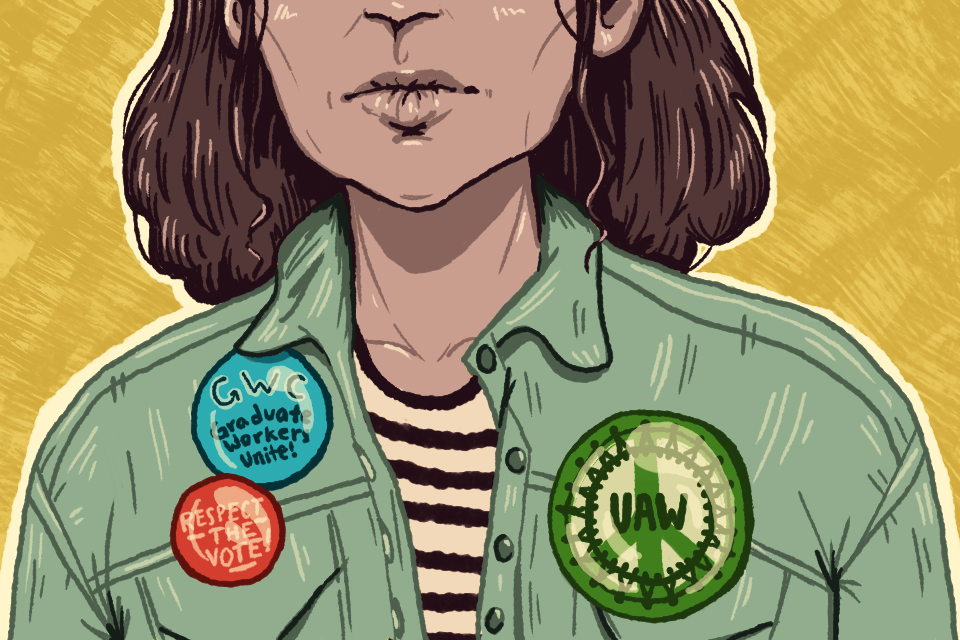 When we first came to Columbia, neither of us was planning on helping form a union for graduate workers—far from it. We came here to pursue our respective interests and move our research forward. In fact, our stories up until this point were very different: Olga grew up in Russia, is currently working toward her Ph.D., and has worked as a teaching and research assistant in the department of civil engineering and engineering mechanics. Justin is a native of the Northeast, pursuing an MD/Ph.D. at Columbia while working in a cancer research lab funded by the National Institutes of Health.

We love our work, and have enjoyed meeting new people and becoming a part of Columbia’s community. But we also learned the hard way that we couldn’t count on the University to provide the support we needed, nor guarantee us rights. And we realized that in order to succeed here, joining together with our colleagues to form a union would be critical.

Nine months ago, 72 percent of Columbia’s research and teaching assistants voted to unionize. But we are still waiting for the University to bargain with us. Despite the nearly 1,000-vote margin of victory, a subsequent public petition signed by an even larger majority of the workers in support of unionization (around 2,000), and the regional National Labor Relations Board affirmation of the validity of the vote, Columbia has refused to bargain with our democratically chosen union, GWC-UAW Local 2110.

In my first year, Columbia paid me two months late in my first semester and three months late in my second semester. And despite Columbia’s disregard for its obligation to me, my obligations to the school continued: My rent was still due to University Apartment Housing, and I still had classes I needed to focus on and complete. I had to resort to borrowing money from my roommate because Columbia did not pay me on time, and I had no recourse.

Needless to say, I quickly became aware of the types of insecurity that had led many of my coworkers—roughly 40 percent of us international students—to start organizing.

International students face unique challenges while spending five to seven years working on a Ph.D. Since our visa regulations prohibit us from taking off-campus employment, our standard of living depends entirely on the pay, benefits, and other conditions that come with our appointments at Columbia, which are predominantly research assistant or teaching assistant roles. This dependence is felt even more acutely by those who have families—since spouses are also not allowed to work off campus—or those with health issues.

Receiving regular paychecks from your employer seems like something you would take for granted, but unfortunately, at Columbia that’s not the case. This university, as I personally discovered, has a chronic and widespread problem with paying individuals late. My situation was just one of many, and it could be a lot worse. My colleague in the Mailman School of Public Health went nine months without pay for his work as an RA in his first year at Columbia. He was also an international student and had to borrow from friends and even his mother’s retirement fund in order to make ends meet.

In spring 2015, a chemical engineering TA contacted union organizers after he experienced another widespread issue first-hand: the complete lack of due process when it comes to firing graduate workers. Longxi Zhao, an international student from China, was terminated without any acceptable notice or semblance of due process.

Longxi got fired for several reasons, ranging from failing to proctor a quiz—which was a responsibility of his co-TA—to going home to China over spring break. According to Longxi, the professor he was TA-ing for at the time told him he did not want Longxi to leave for vacation because he didn’t “trust China.” The letter notes that this vacation in particular led to his immediate dismissal.

It didn’t take long for Longxi to find out that Columbia has no procedure for the termination of teaching assistants. Seeing Longxi and others terminated in this blatantly arbitrary nature, I felt, more than ever, the precarity of my position as a graduate worker at Columbia. A union contract with standard “just cause” protections, which exists at New York University and more than 60 other university campuses across the United States, would have allowed Longxi a fair chance at keeping his TA job and staying in the engineering program.

As a Ph.D. student, I have made a choice to dedicate many years to my research and study. My colleagues and I work hard to balance intensive study and research with teaching duties; some of us also have families, as many get married and have children at some point during their Ph.D. or postdoc. The fact that one supervisor with unchecked authority could give no explanation and upend our academic and professional careers and our reputations is intimidating, to say the least.

Between the late pay and the arbitrary terminations, I began to question what I deserved as both a Ph.D. student and graduate worker at one of the most prestigious and wealthy universities in the nation. And this is just one of the reasons I began organizing for a union—I saw that unions at other universities have been able to make significant progress in this area, and that we too needed a voice at work and a way to stand up to this blatant disregard of our rights.

I never would have imagined I would be facing these basic challenges in my working conditions at a world-class institution like Columbia. Unfortunately, the deteriorating condition of some of our facilities, and the University’s lack of attention to these problems, significantly hinders our ability to do quality work.

The experiments in the Eric Greene Lab require clean water, but the water that comes out of the faucets in the William Black Building, where I and hundreds of other researchers work, is brown and cloudy. Instead of using the water in the Black Building, we have to purchase additional water offsite. And because the weak heating, ventilation, and air-conditioning systems in our building allow black dust to be pumped into our labs, we purchase additional air filters. We replace them every three weeks because they accumulate so much dirt. The clean water and the additional air filters are unnecessary costs for the lab and the grants supporting it, not to mention the potential impact on our health and safety.

Beyond the monetary costs, these infrastructural impediments have resulted in countless hours of failed experiments and troubleshooting. It took my labmates and me many months to figure out why all of our experiments were suddenly not working, unnecessarily extending the length of our Ph.D.s and slowing our ability to make scientific contributions to research community. We must also maintain vigilance in replacing the many air filters around the lab, requiring an additional unnecessary chore.

Those of us who work in the Black Building have spent years individually, and unsuccessfully, trying to get administrators and various University departments to address deteriorating lab facilities. Working with the union, however, a group of us got a petition going that led to a meeting with a dean, something that none of us, including our faculty, were able to make happen previously. Although it felt empowering to receive some sort of response, we still grew frustrated by the lack of action. This was just a small step in the right direction and we have a long way to go.

The issues facing RAs and TAs at Columbia don’t end with our stories. We are members of our bargaining committee and have seen the concerns expressed in nearly 2,400 bargaining surveys—in addition to chronic late pay and facility degradation, our colleagues are concerned about unpredictable health benefits, inconsistent enforcement of family benefits, weak protections against sexual harassment, and the complete lack of due process. It is clear that Columbia can do better.

With so many issues impacting our day-to-day lives, it’s hard to focus on the quality research, teaching, and other services that are expected of us. The University has tried to pit us against one another and convince us that Columbia is the only one that can really solve our problems. Yet so many of our concerns remain unaddressed—either we are not being properly heard, or we are not being listened to at all.

Despite Columbia’s stalling, majority support for our union continues to grow—we are not going away and neither are our community supporters. It is reassuring to see how eager many undergraduates, faculty, alumni, other members of Columbia community, and leaders outside it are to support our struggle. For example, on September 20, we held a forum on the University’s refusal to bargain with our union, and how it affects us. We were proud to be joined by U.S. Representative Jerry Nadler, U.S. Representative Grace Meng, New York State Assemblymember Deborah Glick, New York City Councilman Mark Levine, and more. These leaders listened to us, ultimately stood up for us, and called on the administration to “get with it” and start bargaining with our union.

It’s time for Columbia to work with us, not against us, especially when so many of the things we all believe in are under attack by the Trump administration: science funding, Title IX protections, rights for immigrants and more. We’re stronger when we stand together. We want to see the Columbia that protects and empowers us, its workers.