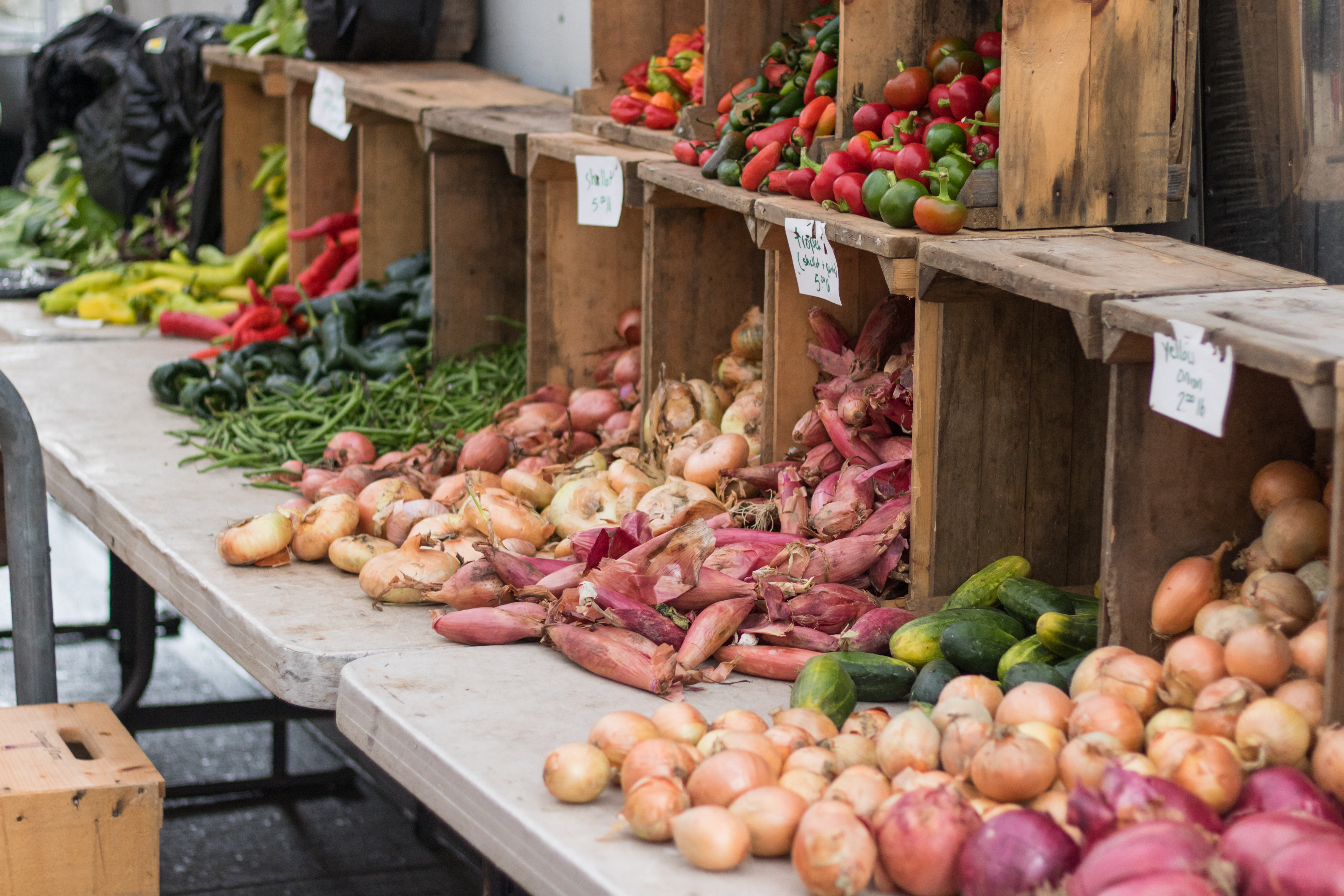 When I wake up at 7:30 a.m. on Oct. 12, it feels as though it’s the crack of dawn. I slowly stumble out of bed and spend the next five minutes trying to convince myself to be a functioning human being. But just a block over, people who have been up for hours already are unloading their trucks and bins onto stands that line Broadway outside the campus gates. It’s Thursday, and the Columbia Greenmarket is open.

The Greenmarket is a farmers market comprised of various local sellers who gather to sell their goods every Sunday and Thursday Goods vary from bags of fresh lavender to local fish.

When I meet Rebecca Quinn of Stannard Farm, a middle-aged woman with her hair pulled back in a ponytail, she is heaving a wooden box of produce off the ground and onto her stand. She has been up since 1 a.m. putting produce into her truck and driving all the way from north of Albany in Cambridge, New York. Now she is here, seven hours later, finally opening up shop.

Quinn has been coming with Stannard Farms to the Greenmarket for over two decades. With these experiences come a lot of stories. She tells me that she has seen everything, from the occasional drunk student stumbling home at 6 a.m. on a Sunday morning, to having to face a woman complaining that the white eggs she was selling were unnatural and bleached (which, Quinn says, weren’t).

This is a typical day for her at the market, dressed in an old hoodie that has faded after years of use and thick work gloves worn out from carrying heavy wooden crates all day. She looks ready to take on whatever the rest of her 14-plus-hour day has in store for her. 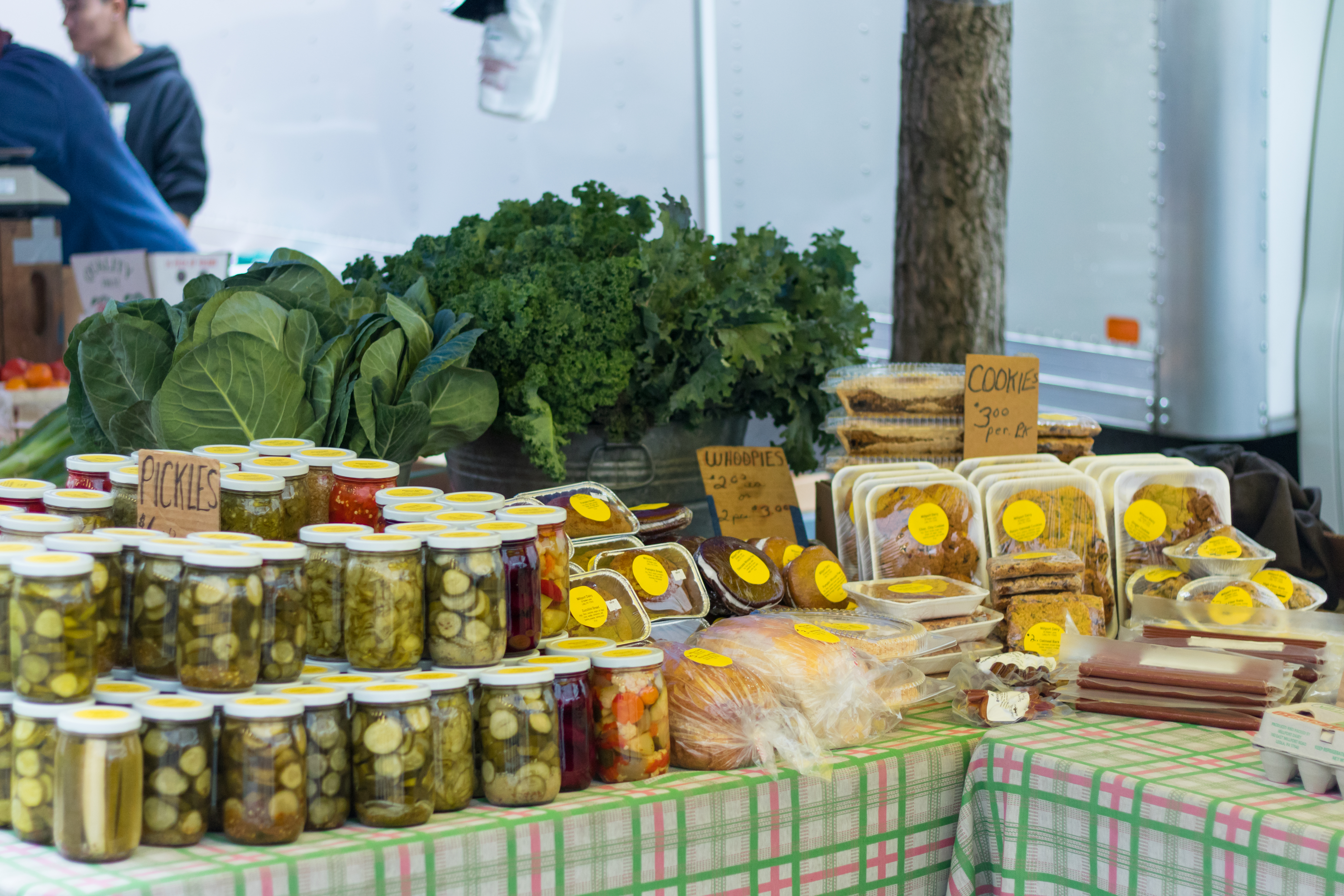 Every Sunday and Thursday morning, William May, a man in wire-rimmed glasses at the Hawthorne Valley Farms stand, wakes up at 2:30 a.m. and makes the three-hour drive from Ghent to Brooklyn, where he unloads his first stand at a market. Then, he returns to Morningside Heights to set up his next stand, where he will be until about 4 p.m..

We talk while he’s setting up, and I look around at the three other workers; they too are rushing around, weighing vegetables or unpacking boxes from the van parked just behind the tent. Even though it is only 9 a.m., people are already filling their bags with a colorful assortment of baked goods, carrots, onions, spinach, peppers, and more.

Hawthorne Valley Farms has been coming to the Columbia Greenmarket for just under a decade, and while its interaction with the Columbia community has been generally positive, he still feels like few students are aware of their presence on campus.

“During finals week, someone will be like, ‘A cookie! Give me a cookie!’ and [then] be like, ‘Is this thing here all the time?’” he says. “We’re here Thursdays and Sundays from 8 a.m. to 4 p.m., 52 weeks a year.” Most Columbia students walk by his stand twice a week, and yet, they rarely realize the fresh produce right at their fingertips.

A few stands down, John Stoltzfoos from Millport Dairy in Lancaster, Pennsylvania, is arranging cheese on his three tables, which are already filled with an assortment of Mason jars, eggs, bread, and more cheese. He’s dressed in a light blue dress shirt, black suspenders, and a wide-brim straw hat.

At first he seems hesitant to talk to me, but as our conversation continues, he starts to talk as though we are old friends. He smiles widely and enthusiastically tells me that he, too, has been up early, ever since his alarm clock went off at a quarter to two that morning.

Before arriving to the Greenmarket, he had to stock coolers with produce and load them into his van. Then he stopped by the gas station to fill up his tank and grab some coffee for the road.

In the middle of this conversation, a woman comes up to make a payment and hands Stoltzfoos a wad of cash for the eggs under her arm.

“No cheese today?” he asks her.

“Not today.” They both laugh and she leaves, hurriedly ducking into the rain that is sprinkling down around us. 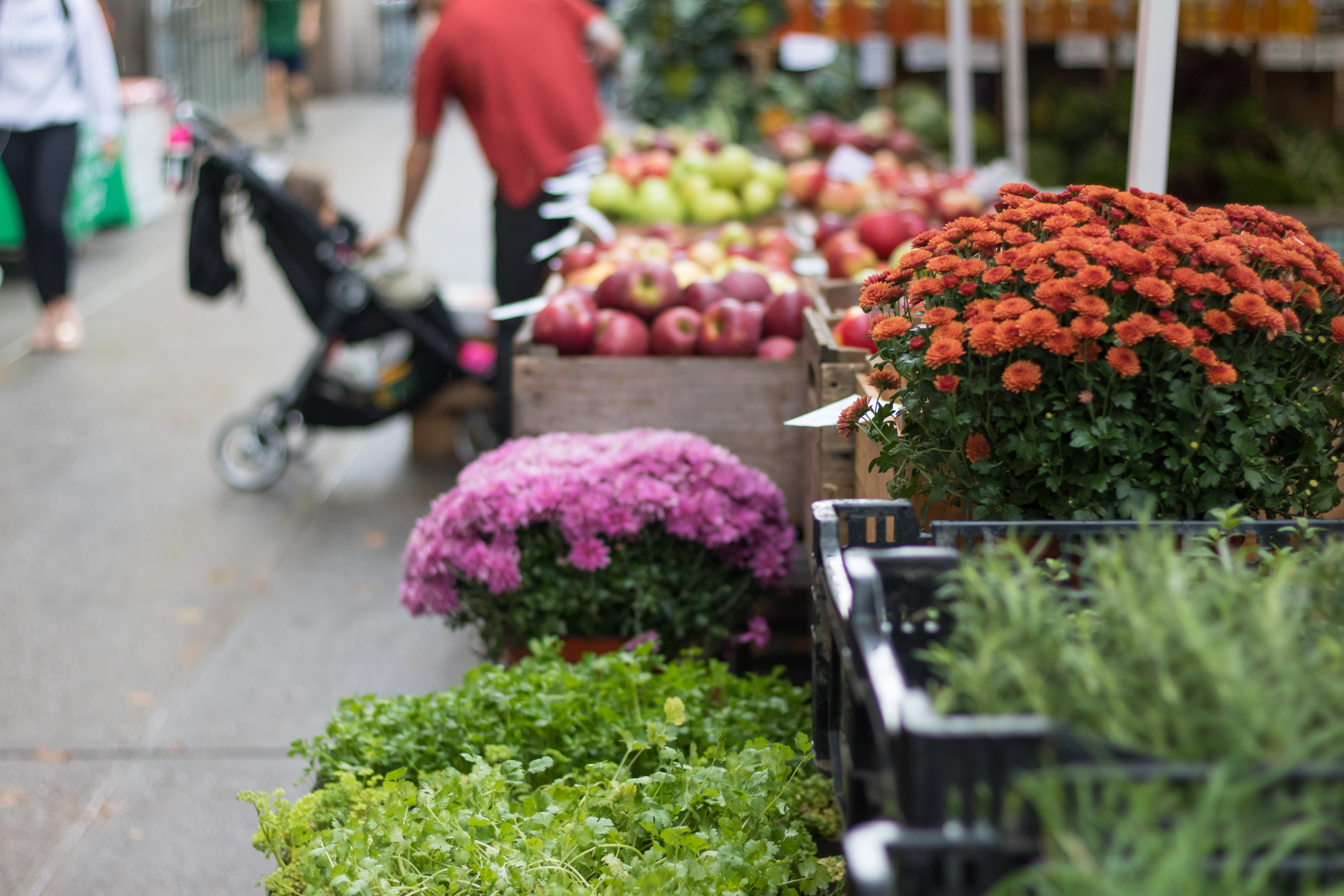 Although working at Greenmarket can be stressful at times—like when she is arguing with a customer about whether her eggs are bleached or not—Quinn says it’s worth it for the chance to make a personal connections with varied kinds of people.

She’s gotten to know a lot of her customers—many have stopped by for nearly 15 years. She gestures to a man behind us with a bag in his hand who is rifling through a box filled with lettuce, saying, “One example right here.” The man looks up and nods, waving his hand affectionately back at Quinn.

She smiles, and I get the sense that this is a common occurrence at her stand in the Greenmarket. She tells me that by working at the Greenmarket every Thursday and Sunday, “you see the neighborhood grow up.”

She has watched parents help first-years move in, and has seen those parents return again and again for parents’ weekend, and then three, four years later for graduation. It’s an interaction that she gets to be a part of, all through the medium of locally grown produce.

Her regulars aren’t deprived of Stannard Farm’s goods during the winter either, despite the fact that her produce doesn’t do too well outside in the cold.

To ensure its root vegetables, honey, and apples don’t freeze at the market during the winter, Stannard Farms hauls heaters, tarps, tents, signs, and weights all the way from upstate New York. Their commitment to providing their regular Columbia customers with locally grown produce is not hindered by rain, snow, or sleet.

Back at the Millport Dairy stand, Stoltzfoos tells me that he has a lot of regulars who stop by his stand as well. After nine years of working at the Greenmarket, it’s hard to imagine he wouldn’t.

After all, Millport Dairy has a lot of produce to sell. When it comes to cheese, they make a thousand pounds of it every day. Sounds pretty gouda to me. (No? Okay.) He also has butter, yogurt, kielbasa, ground beef, pickled beets, and more.

He even invites me to go help make the cheese up at the farm some morning. I’m not sure if I’m going to be able to make the 6 a.m. start time, but it is a tempting offer.

We wave goodbye, take a few photos, and as I’m walking away, a new crowd of people bustle into the stand, taking refuge from the rain while perusing the stand’s variety of offerings.

I get the impression that a thousand pounds of cheese don’t last very long around here.

In a world of big grocery store chains and exponentially growing fast food delivery apps, the market offers a place to know exactly how your food was produced and where it’s coming from. If there’s one thing May, from Hawthorne Valley Farms, is confident in, it’s the quality of his food.

He holds up a head of lettuce. “I have no qualms about selling this to you. I know this is the best thing that you can eat, so I just have to get you to understand that, which is easy,” he says. “Whereas when I have to convince you that you need it, that’s hard.”

He tells me that Hawthorne Valley Farms isn’t just any farm: it’s a biodynamic farm. Their technique is based on the philosopher Rudolf Steiner’s theory of theosophy. This theory calls for a focus on the spiritual, emotional, and physical aspects of the farm. May tells me that this approach means that not only do they refrain from using harmful chemicals and fertilizers, but they view the farm as a person and focus on the idea that there is a spirit in everything.

For this reason, they plant in accordance with the moon cycle. Their belief is that since people and plants are mostly made of water, the moon must have an affect on them in a similar way to how the moon controls the tide. He tells me that they do as much hand cultivation as possible, as this allows farmers a closer way to get to know the farm.

May knows a good deal about the struggle of buying locally produced food in the city. Before moving to Hawthorne Farms, he lived in Long Island. He says he’ll never move back to the city now that he’s experienced country living.

“I’m more worried about where my food comes from now than I ever was being a yuppie on Long Island, being like, ‘I have to go to Whole Foods to get my food,’” he says. “Now I’m like, ‘I need to find somebody who actually ethically raises their animals.’”

As a result, May believes the Greenmarket is a worthwhile endeavor. He hopes that by coming to Columbia, students and faculty will start to adopt some of these values regarding their food, too. When it comes to looking for more sustainable, ethical, or fresher options, stepping outside onto 116th Street and Broadway any week of the year is a good place to start.