The Great Divide: STEM and the Humanities

The Great Divide: STEM and the Humanities 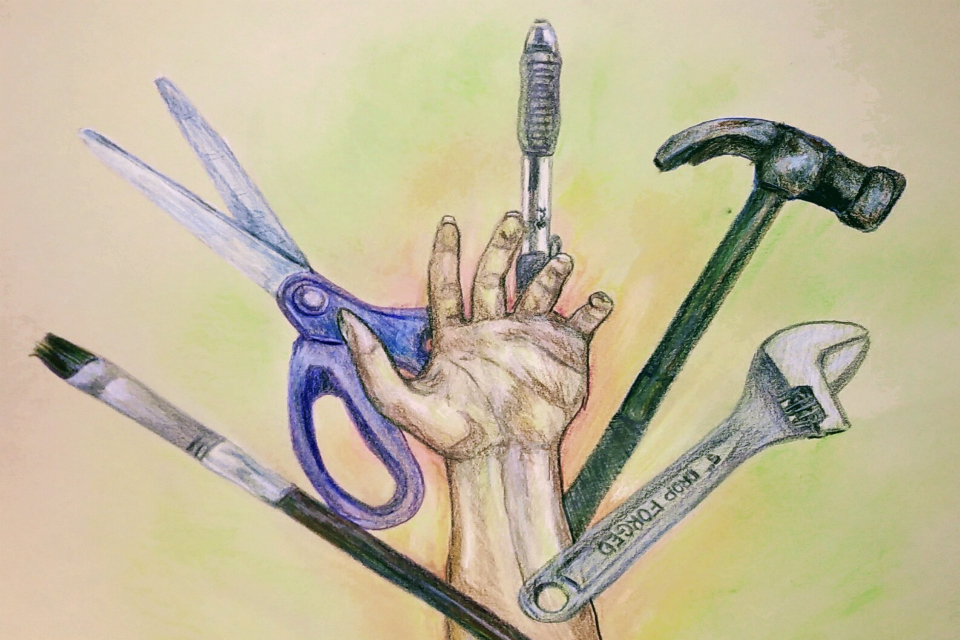 “What do you want to be when you grow up?”

It’s a question that opened a whole universe of possibilities in elementary school. We could be astronauts, or firefighters, or veterinarians. No choice was better than the other, because how can you compare such big dreams?

Once college hits, though, “What do you want to be when you grow up?” turns into “What are you majoring in?” The college major: a stepping stone one must wearily take on their way to becoming, on their way “to be.”

When I came to Barnard, I was torn between my love for astrophysics and my ease with reading and writing.

Ultimately, I tossed my astrophysicist dreams to the side, deciding that studying the universe could be more of a hobby. In February of my sophomore year, I declared a history major with a concentration in science, technology, and the environment and a minor in environmental science.

But as I debated my major, I found myself questioning the greater value seemingly placed by society on the sciences over humanities. What were the fundamental assumptions in this hierarchy? But more importantly: Is the binary between the two fields—the great divide—real? What happens when they come together, as often occurs outside of college?

With major declaration season came endless posts on social media by classmates announcing their majors. Turning in my declaration form and receiving my “I Declared” button felt like a milestone in my college career.

An aspect of this season that quickly became prevalent, however, was the perceived undervaluing of humanities majors as means to a career. Even though some statistics give a basis for this perception, the notion that studying humanities leads to a life of low salaries and unemployment is largely a myth. As a humanities major myself, I don’t tend to make jokes (or even worry) about job prospects post-graduation.

Bella Pori, a Barnard class of 2015 alumna, graduated with a degree in American history and human rights, and has since worked for two New York state assemblymen and for a United States congresswoman on Long Island. “I studied the humanities, most of my friends studied the humanities, and all of us are still gainfully employed, living in the cities we want to live in,” she says. The stereotype that English majors, for example, can’t get employed is “blatantly false,” she stresses.

She is not the only humanities major who has an issue with this stereotype.

“As people in an extremely privileged position at elite institutions that are highly connected and offer and afford lots of opportunities, I think it is problematic for us to joke about the very real reality of American unemployment,” Barnard junior Madeline Ducharme says.

Ducharme is majoring in history and pursuing a minor in women’s, gender, and sexuality studies. She has also worked as a social work constituent service intern with New York City Council member Ben Kallos. According to Ducharme, students equate unemployment to not getting a job in their field after graduation.

While these unemployment-related jibes circle the internet, it was not difficult to find humanities majors, such as Ducharme, who have had professional experience as interns and are optimistic about their job prospects post-graduation.

Veronica Suchodolski, a junior at Barnard and a former Spectator trainee, was an editorial intern at HGTV Magazine during the spring 2017 semester. She is an English major concentrating in creative writing and minoring in French and philosophy.

At HGTV, many of Suchodolski’s coworkers would stay for a year or two and then move on to other opportunities within the journalism and media industries. Suchodolski quickly understood the flexibility and opportunities that can await a humanities major in the professional world.

“I had a lot of anxiety about what am I going to do when I graduate, and now I’m like, I could do basically anything after I graduate. And then if I don’t like it, I can do something else,” Suchodolski says.

Beyond the internship, Suchodolski sees the value and utility in her choice of major. “If you major in English, you have a skillset of being able to write really effectively and being able to read critically that can be sort of broadly applicable to anything,” she says.

Suchodolski is not the only one who has had success in the world of publishing. Juliana Kaplan, also a junior English major at Barnard and a former Spectrum staff writer, was an editorial books intern for O, The Oprah Magazine and an editorial intern at Boston Magazine.

Kaplan’s major provided her with the practical skills of writing effective cover letters and speed reading. Being a humanities major, in fact, was a requirement for her job, which can be attributed to the valuable reading, writing, and critical thinking skills required to do well in a humanities classroom.

And outside the classroom, those skills hold value in the professional world—something that Pori, who graduated two years ago, has experienced. Her coursework in the humanities taught her to write and synthesize difficult texts, skills that Pori uses daily in her professional career. She says that she approaches problems in the present with a historical lens, which is incredibly important when working with policy.

“If I could go back and do it all again, I wouldn’t choose to major in anything else,” Pori says with certainty. “You try to make other people see them the way you see them, and so that, I think, is the biggest value in a humanities degree in terms of going off into the future.”

And so, not only is it incorrect to think that humanities majors’ skills don’t have a practical purpose, but Ducharme believes this also reveals something larger about what we fundamentally value in society.

“This public display of ‘Everyone’s going to be unemployed because we’re all humanities majors’ is … contributing to this larger world that devalues … empathetic, humanized work—work that is about writing and reading and understanding people and working to amplify voices and narratives,” she says.

Kaplan echoes this idea of the personal value. When she came to college, her parents told her: “‘If we’re going through spending this disproportionate amount of money for you to go to college, we want you to take classes that are going to make you feel like you’re being the best version of yourself and learning how to best equip yourself for whatever it is that you want to do.’”

This attitude, however, is not the approach every family takes, especially when finances are involved. A 2015 article in The Atlantic titled “Rich Kids Study English” states that, based on analysis of data from the National Center for Education Statistics, “Kids from lower-income families tend toward ‘useful’ majors, such as computer science, math, and physics. Those whose parents make more money flock to history, English, and performing arts.”

The article does concede that “it’s important not to build any rigid theories around the correlations.” Still, the piece highlights that the ability to be able to view education as personal may often be a consequence of privilege.

Today, the humanities may be disproportionately studied by students who have the financial security to choose these fields, but it has not always been this way. The humanities—through film, music, writing, media, law, and politics—are ingrained in our history and culture, no matter who studies them now.

“Culturally or socially there’s a tendency to be like, ‘I’m a science person’ or, ‘I’m a humanities person,’” which causes people to fall into specific roles and not really question how that happened, says Columbia College senior Camilla van Geen, who is pursuing a double major in neuroscience and philosophy.

To van Geen, there is a clear connection between these two disciplines: “They’re both trying to understand the mind and human behavior and what it means to be a human.”

Of course, this division is not exclusive to Barnard and Columbia, but rather is an inherent part of the overarching nature of academics. I spoke to Adam Cannon, a computer science professor at Columbia, about this split between STEM and the humanities. Cannon teaches a course called Computing in Context, which teaches humanities and non-computer science students the tools they need to use tech and computing in different humanities disciplines.

This interdisciplinary partnership is what I pursue with my chosen course of study. By taking history classes about sciences, I not only learn basic scientific concepts, but also the history of how this science affects people and culture. The work that scientists produce is incredibly valuable, but being able to analyze the real-world effects of this work, and communicating this work to others through writing, are also essential.

Van Geen recognises the value of this partnership within her majors.

“I think that there’s a valuable link because philosophy, statistically as a discipline, sort of claims to be very rigorous and logical and almost scientific,” she explains. “I think it makes a lot of sense to then apply actual science to something that thinks of itself as so ... cold and logical and clear and definite as a discipline.”

STEM and the humanities must not be divided and both disciplines should be seen as equally valuable to the world at large. College graduates are needed in every discipline, and, as a Fortune article puts it, “We need all those graduates to be equipped with a broad base of knowledge and intellectual skills that cut across disciplines.” Doctors need to understand the socioeconomic factors tethered to public health, and effective policymakers need to be educated in history and science.

This is the kind of understanding van Geen hopes to bring to law school, where she plans to apply the science and rigorous data analysis that she has learned as a neuroscience major to legal questions. “It’s really important when you’re trying to dictate how humans are going to act to have a deep understanding of the actual science behind it,” she says.

Cannon also understands this partnership and the work that can be made from the fusion of the two disciplines. He explains how computers “amplify human intellect and allow us to solve large problems that we couldn’t solve before,” such as creating complex algorithms and calculating rocket trajectories. Teaching humanities majors computer science can lead to discoveries and advances that could not have been possible before.

“I believe it’s becoming very useful for humanities students to be able to use these tools in their own disciplines. Not to become computer scientists, but to actually apply these tools in their own disciplines,” he says. “People in the liberal arts, people in the humanities, are using computers, and they’re finding really cool and interesting ways to advance research in those areas using computers.”

Programming does not occur without creativity. While engineers and computer scientists are the brains behind the machine aspect of the process, programming is a collaborative and highly creative thing that is not exclusive to STEM.

And to Cannon, this creativity and furthering of the humanities may just be the entire point. “Do I think like the humanities are going away? No. Do I think the arts are going away? I sure hope not. Those are beautiful, wonderful things that make society a rich place,” he reflects. “Technology is, in my opinion, anyways, not here to usurp those values, and more to, in a lot of ways, serve them, to help … amplify our capabilities.”

Have fun leafing through our fifth Issue, and subscribe to our weekly newsletter, As We See It!