For There Could Be No Doubt of Their Sex

For There Could Be No Doubt of Their Sex 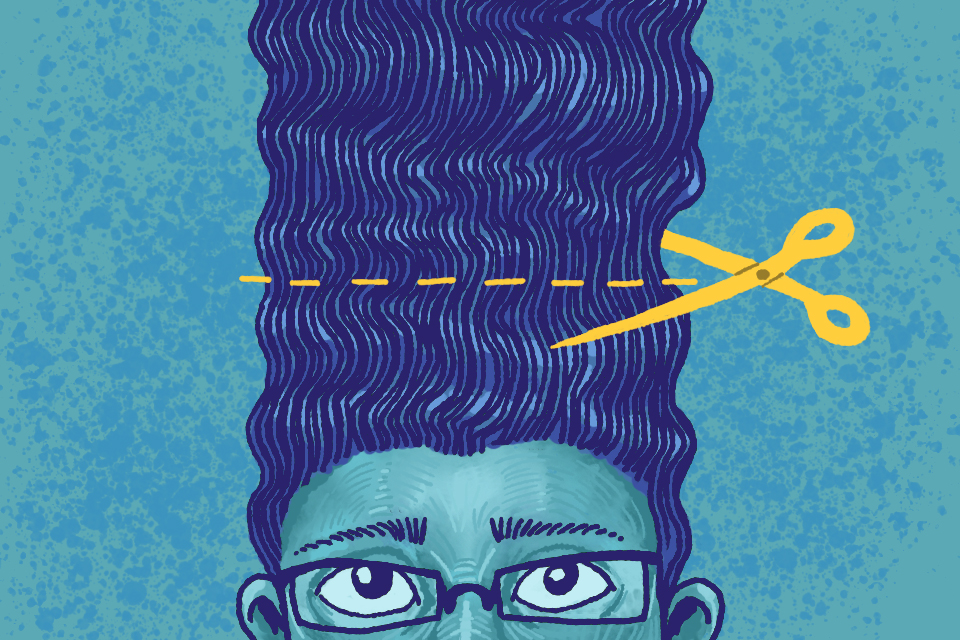 It’s become something of a tradition to cut your hair short when attending a women’s college. Not everyone does it, of course, but it’s a common enough occurrence to have earned its place as a familiar trope, a well-known part of Barnard culture. When I first got here, I didn’t feel such an urge—but now I sit, a month and a bit into my sophomore year, ready to chop it off. But I’m not here to mark my entrance into a new kind of womanhood, as is often the case when it comes to the “Barnard Chop.” Rather, I’m marking an exit from it.

“Boy-short,” I describe to the hairdresser, swiping through some reference photos on my phone to show her. The salon is bare walled, all white and concrete, save for a rainbow flag in the window. (I had, of course, come across this place by Googling “gay hair salons nyc” as a joke and then ended up actually finding one). Everything is hyper-minimalistic, down to the hairdresser’s hair—nothing but a buzzcut. I wonder if this should make me dubious, à la never trust a thin chef, but really there’s something about the austereness of both her and the space that is comforting. It makes me feel like this doesn’t have to be as big of a deal as I’ve been building it up to be in my head.

I’m nervous; I’ve never done anything much with my hair before. For 19 years, I’ve just let it be, an untamed, unruly mass of curls that has always seemed like something matter-of-fact and essential. Performing a change so drastic for the first time almost feels violent, and I’m equal parts anxious and excited to see what I’ll feel like afterward. It’s this violence of the act, the abruptness and decisiveness of it, though, that I’m after.

My favorite theatre practitioner, Anne Bogart, talks about how making a definite statement about something is inherently a violent act, because it destroys every other option of what could be said. “We tremble before the violence of articulation. And yet, without the necessary violence, there is no fluent expression,” Bogart says.

So here I am, trembling in the salon chair, desperate to say something, terrified and elated by the resoluteness with which I’m going to say it: I am not a woman.

This act of articulation is much more for my own sake than for the sake of qualifying myself for others. The Barnard community, being the wonderful place it is, and my friends, being the wonderful people they are, ask for no such qualification. They are already using they/them pronouns without the bat of an eye and have been immediately and completely supportive.

But there is still a voice that pulls me out of myself when I look in the mirror sometimes, or when I hear myself referred to as them, alongside the relief of being recognized the way I want to be: Are you making this all up? You’re going to snap out of it one of these days and will have done this all for nothing, it tells me.

Objectively, I know this is unlikely. I have been thinking about my gender—about the way being called a girl or woman felt like playing an instrument just a little bit off-key, then increasingly more dissonant—for over a year now. Perhaps it’s ironic that I began identifying as not-a-woman after coming to a women’s college. But then again, perhaps it’s exactly the expansiveness and openness with which the Barnard community understands the meaning of Woman that enabled me to see that it is Woman as an entirety that I feel apart from, not just some limited understanding of what a woman can be. At Barnard, being a woman does not necessitate any specific kind or aesthetic of gender performance: Anything you are can be Woman. Here, there is no issue of me not being able to satisfactorily achieve Womanhood.

I’d felt discomfort in the gender role expected of me even before Barnard, but I always understood that discomfort as coming from the more traditional and limited gender categories the people around me (my family, in particular) expected and regulated. The dissonance I feel, I’ve come to realize, is not with anything about the identity of Woman, but with the very identity itself.

There are many moments where I feel absolute conviction in this new non-binary identity, moments of finally. Other than this haircut, I have attempted multiple other means of silencing the strange, skeptical voice that tries to convince me otherwise. I have stuck a they/them pronoun pin on my messenger bag for all to see, hoping that if others know then I will be affirmed by their gazes. I have scrawled across my mirror, in an ode to Orlando, one of my favorite books, and as a reminder of the history of androgyny that I am inheriting, “THEY—for there could be no doubt of their sex.” Perhaps the sheer association of the word with my image in the mirror will make it feel more real, I reason. Cutting my hair feels like a last gasp at overpowering the self-doubting thing in me, at speaking louder.

Of course, there is also a part of me that feels stupid and even guilty for choosing a haircut to mark my exit from womanhood. What am I saying—that Woman is defined by long hair? That to cut it off is inherently gender-neutralizing? That to identify outside of the gender binary, one has to embody a certain kind of socially accepted androgyny? As the hairdresser begins to snip and I watch locks fall away in the mirror, a flood of panicked, last-minute questions barrages me. Am I just doing this to pass better as something-other-than-Woman? Is it terrible if I want to pass, even if I don’t believe I necessarily should have to?

Here’s the thing, though: I am desperate to grasp onto whatever sense of inheritance I have in this new identity. I want to be marked; I want to belong; I want to be recognized. I knew of the shoulders I stood upon as a woman and as a lesbian; I was aware of the battalion of women stretching through history and lending their strength to my voice.

It is not that I have completely lost this inheritance of spirit, but I feel a lack of precedence I did not before. In the Modernism class I’m taking, we have been speaking about the Anxiety of Authorship, the idea that a lack of predecessors makes writing—or more broadly, the ability to understand and express oneself—difficult, seemingly baseless. I feel as if I am hitting up against this problem, discussed abstractly in a literature class, in a very visceral and tangible way. Who were the voices like mine that sounded before me? Perhaps even more importantly, who are the voices like mine now? It sounds foolish out loud, but I can’t deny its impact: The few other nonbinary people I know in my day-to-day life all, too, have short hair. Ultimately, it seems to come back to wanting to convince myself that I have a right to a shared something with them, that I have a right to this identity. I want to look like them until I feel like I’m one of them, until I stop second-guessing it.

I hope there is a day that comes, soon, when I don’t feel gendered by having long hair—not even in the eyes of a community or of others, but just in my own. I hope there is a day soon when I do not have to externally mimic the gender presentation of other nonbinary individuals just to feel like I belong. I hope that there is a day when I hear the voices of those who walked this path before me loud and clear, drowning out every decibel of the dubious voice in me. I hope to myself to play whatever part I can in excavating the history, voices, and songs, of the shoulders I stand upon. I hope, I hope, I hope.

For now, my hair is cut.

(The whole thing is over alarmingly quickly. I walk out in little more than 20 minutes. I can’t help but feel like it’s anticlimactic, that something so symbolic to me should take longer than this to play out. I suppose it is, after all, just hair. Strange how something so easy to cut and change can mean so much).

Have fun leafing through our sixth issue and subscribe to our weekly newsletter, As We See It!