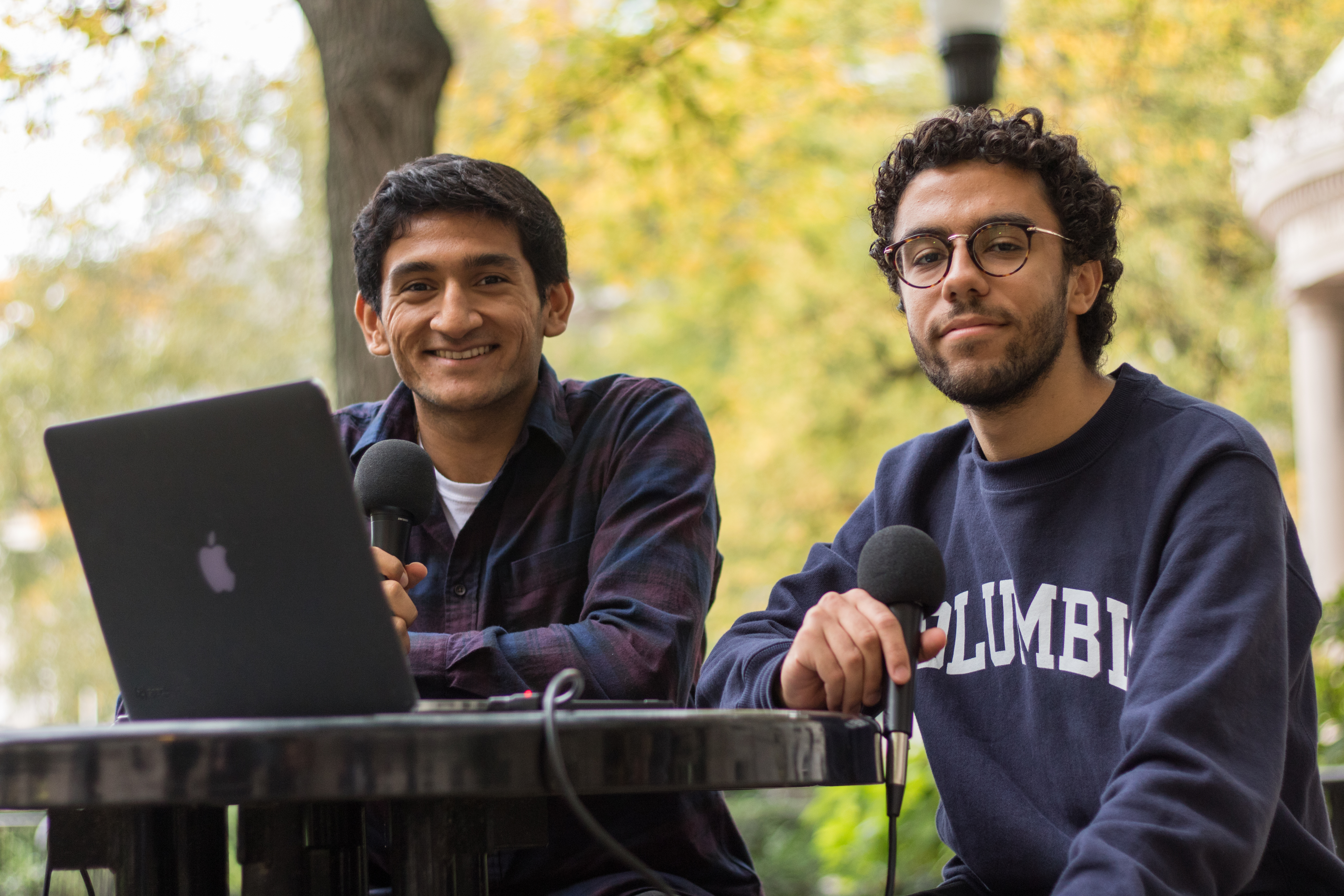 “The King of Free Speech would be absolutely cool as hell,” Prem Thakker, a first-year at Columbia College, says when asked whether he would like to interview Columbia University President Lee Bollinger.

“Yeah. Him and Barack.” Bassel El-Rewini, a first-year at the School of Engineering and Applied Science, adds with a laugh.

The two smile easily as we talk at a table outside John Jay. Their voices remain steady and their postures are relaxed, even as they swat away the clouds of tiny insects that float around us. There’s a certain rhythm to their thoughts as they build on one another’s ideas in a way that feels practiced, yet unrehearsed. This isn’t their first time speaking on the record.

For the past eight months, Thakker and El-Rewini have been running The Laymen, a podcast that facilitates a healthy exchange of different ideas on hotly debated political and social topics . More specifically, it aims to create a space for the kind of the discussion that can often be drowned out by the tendency of many on both sides of contentious issues to shout at the other without considering their ideas.

Releasing new episodes to hundreds of weekly listeners on iTunes from February to June of this year, the two have worked side by side to probe students, teachers, activists, journalists, and North Dakota Senator Heidi Heitkamp, among other guests, with questions on their beliefs and ideologies. The podcast has been on hiatus since June, but the two plan to return within the next few weeks.

But El-Rewini and Thakker’s two-man show didn’t begin at 116th Street and Broadway. The origin of The Laymen arose from their friendship, which began when El-Rewini first moved from Dallas, Texas, to Grand Forks, North Dakota, back in 2008. His family had come following a job opportunity at the University of North Dakota, and so without warning, El-Rewini found himself traveling over a thousand miles to a town he had never even heard of.

“I remember I Googled Grand Forks, and the first picture that came up was just a flood,” El-Rewini tells me. “There was this really bad flood in 1996—”

“’97,” Thakker corrects from across the table.

Grand Forks was a new experience for El-Rewini—smaller and less diverse than the big city he had come from. But despite his initial misgivings, today El-Rewini clearly takes pride in his home state.

Thakker’s journey to North Dakota began much earlier. His parents emigrated from India many years ago and first settled in Chicago where he spent the first year of his life. In search of more stable employment, Thakker’s family moved to Grand Forks, acquiring the Super 8 motel that would become their home for the next five and half years.

Grand Forks itself plays a major role in the development of the podcast. Weekend hockey games and a supportive, close-knit community are hallmarks of the Grand Forks experience—and while El-Rewini and Thakker never found themselves fully engrossed in the sport (El-Rewini, a soccer player for nearly 15 years, does concede, though, that it’s “kinda like soccer on ice”), the two did feel mostly welcomed by the community.

The people of Grand Forks possess a certain generosity and sincerity, they explain. Help isn’t something you ask for, it’s just given. For instance, there’s snow on the ground seven out of the 12 months of the year, Thakker tells me, but this past year was his first time getting stuck. As he pulled out his phone to call for help, someone pulled up and got out of their car. And shortly thereafter, another came to help, and another, and another. At that point, he hung up the phone.

“There will always be someone to help dig you out,” he says. “No matter how bad the blizzard is.”

But in spite of this, both found that their community could be insulated and unaware. The people don’t mean to insult or offend, they explain, but unintentionally harmful comments still work their way into everyday discourse.

Thakker believes these comments stem from ignorance rather than malice. “It’s like the classic stereotype,” he says. “It’s a town in the middle of Middle America … [and] when you’re not exposed to certain things, you don’t know about certain things.”

As the two moved into high school, they found this ignorance extended into political discussions, as well. El-Rewini struggled to find anyone willing to debate politics in a substantial way, with most of his peers electing to merely agree to disagree, or refusing to discuss any issues at all. Other students seemed unwilling to consider opposing viewpoints, preferring to stay comfortable within echo chambers that supported their own set of beliefs.

On Jan. 15 of this year, El-Rewini felt a need to express this frustration in a more tangible, productive form—and thus the concept of The Laymen was born. He wasted no time in pitching the idea to Thakker.

The initial goal of The Laymen was twofold: to offer a platform through which anyone across the political spectrum could voice their beliefs, and to expose its listeners to a wide variety of beliefs that might challenge their own. The two hoped the podcast would help prevent community echo chambers from drowning out nuanced discussion.

A week after the conception of The Laymen, the 2017 Women’s March swept across the nation. In Grand Forks, people flocked to Archives Coffee House on the University of North Dakota’s campus to discuss important issues and topics in human rights. What was expected to be a gathering of around 40 or 50 people skyrocketed to 304. The college coffee shop found itself overflowing with people.

For El-Rewini and Thakker, this event offered the perfect subject for their first episode, and they were quick to pursue it. Thakker reached out to to several of the women who had organized the event and set up the interview.

In preparation, the two spent hours in coffee shops working on logos, music, and Googling “how to run a podcast.” (Note: I’ve since done this, and articles on the topic tend to vaguely advise simply gathering equipment, picking a niche, and committing to it—all steps The Laymen appear to have followed.) Most of it was trial and error, they admit. They just had to see what would work and what wouldn’t. As far as equipment goes, El-Rewini managed to find microphones, which Thakker cautiously praised as “very economical” and “bare bones.”

“I think people were definitely surprised that we had decent quality,” El-Rewini laughs.

Nervous but prepared, El-Rewini and Thakker met with Jane Croeker and Tori Johnson to discuss human rights and the Women’s March. Without a formal studio to record in, they met in an empty hotel room. The interview passed without any hiccups and just two weeks after the first pitch, The Laymen published its first episode to iTunes.

This story of initial success is not to say that their efforts always ran smoothly. El-Rewini tells me that in the early days of the podcast, their equipment had a tendency to malfunction. He and Thakker recall specifically their first phone interview with a guest from Minneapolis, describing the whole thing as a venture into “uncharted waters.”

“There were certain indicators as he was talking that the line was gonna cut,” El-Rewini says. “So every time his voice just kinda changed slightly….”

“We’d just hold [our] breath and then hope it wouldn’t stop.”

Over these first few episodes, The Laymen garnered three to four hundred regular listeners, landing a feature in the Grand Forks Herald. El-Rewini credits the Grand Forks community as a large factor in their growth, noting that the support they received in the early days of the podcast helped them to persevere through their inexperience and the relatively lower quality early episodes.

“I think, had we been in a bigger city, it would have been easy to be dismissed really early on because we were still learning,” El-Rewini tells me.

Eight months later, The Laymen is looking to expand into one of the biggest cities in the country.

Columbia’s reputation as a liberal echo chamber falls in heavy contrast to the political landscape of Grand Forks, but that doesn’t faze The Laymen. Thakker stresses that, regardless of the popular views of the community, he and El-Rewini plan to continue challenging people’s ideas and welcoming different voices to their platform by striving to remain impartial and inquisitive.

When I first spoke to The Laymen, they were still learning what political discourse on Columbia’s campus might look like. “Whatever the environment here actually is, all we’re going to ask of people on our show is that you can defend your views,” El-Rewini says.

A few weeks after that talk, El-Rewini and Thakker meet with me again to express more concretely the idea that echo chambers do indeed exist on Columbia’s campus.

Thakker relates his experiences debating political issues among friends. He tells me he often chooses to act as the devil’s advocate in order to push discussions in new directions; however, he finds his friends are often uncomfortable addressing the counterarguments he presents. “They’re so used to going with the same narrative and just following along with what makes sense without fully considering other possibilities,” he says.

The Laymen are looking to take advantage of the social capital here on campus and in the city to expand the scope of the podcast. El-Rewini and Thakker are looking for people interested in joining them on the show—as guests, and especially as potential partners in the organization. El-Rewini tells me that they want a more varied staff working on the podcast.

Poised for its re-emergence in New York City in just a few weeks, The Laymen have come a long way from their start in Grand Forks. Even with all the work that lays ahead, El-Rewini and Thakker seem to hold an unshakeable sense of humor and optimism.

“There’s a million ways this organization could go,” Thakker says. “Hopefully one of those ways is up.”