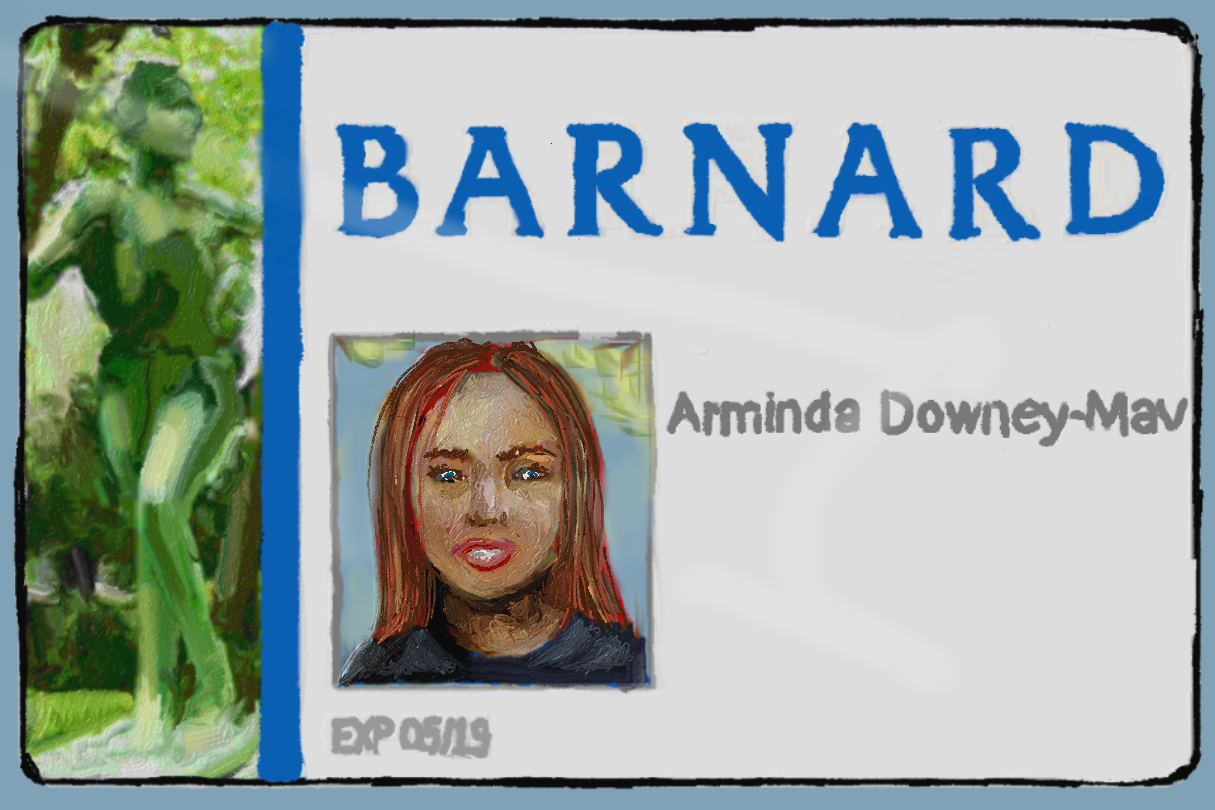 The New Student Orientation Program is difficult enough when you don’t have a name that runs off of federal forms. My heart sank a little when I received my ID card that first day: Arminda Downey-Mavromat, it read. During my time here, I’ve often had to correct the error with an email alerting the school that such a person doesn’t go to this school, but that an Arminda Downey-Mavromatis does. A clerical error, I know, but an error that I’ve found on most official forms.

I’m a woman of a dozen names. My “proper” name is Arminda, but for the sake of convenience and avoiding pronunciation errors, my Starbucks name is Indie. In fact, I go by Indie on all of my social media accounts, and for that reason, many people at Columbia call me that. But I’ve also been called Minda, Mindy, Mini, and a few other nicknames that I’ve cherished for their familiarity.

Then there are the names I don’t go by but am called nonetheless. Amanda—which was used most recently by a family friend I’ve known for years. Armina. Armada (yes, like the fleet ships). Or, a personal favorite, Armadilla. I am quick to correct when it comes to my name, but I am also quick to accommodate. “Actually, it’s Arminda. Arm-in-duh. But,” I say, ready to get out my tagline, “You can call me Indie.”

To make new friends more comfortable and interactions less awkward, I’ve chosen the name Indie for myself. I can’t pinpoint the moment I decided to go by a name that is not my own, but I wonder if, in abbreviating, I lost more than just letters.

More shocking than the new variations of my name during NSOP were the number of people I met who, like myself, introduced themselves with their given name, only to quickly follow with an abbreviation or an entirely different name. Proper names, it seems, are far trickier than they appear.

On the surface, your name is a marker, a way to identify you from a dozen others who may look like you or sound like you. Indeed, in our minds too, proper nouns are separated from other nouns. The book Cognitive Neuroscience of Language by David Kemmerer highlights that patients with left temporal lobe lesions seem to have impaired access specifically to “proper nouns for unique persons,” like the name of a president.

Michele Miozzo, a former adjunct professor of psychology at Columbia, demonstrated this compartmentalization to me even as we spoke. The café where we met was crowded and loud with laughing colleagues and the clink of coffee cups against plates, but Miozzo noted that I easily tuned out the noise of the conversations around me. However, if someone were to say my name, I would respond unintentionally. My brain would automatically shift focus. As for whether I would do the same for a name close to mine, he could not be certain, but the answer is likely yes. He called this ability to hone in on our own names amid background noise “the cocktail party effect.”

The brain is incredibly adept at learning these new patterns, and with a name like Arminda, it’s nothing unfamiliar to me in practice.

When a professor accidentally calls me Amelia or when a stranger calls out to Amanda, I am prone to respond regardless. Mispronunciation does not impact whether we respond to our “name” being called. Variations in intonation of our names, tone, frequency, or pitch do not change our ability to perk up and redirect our attentions. Without intending to, we accept the names thrown upon us, so long as they are close enough to our “real” names.

And when it comes to names beyond the traditional American canon of Sam, Jane, and the like, the language and culture that a name comes from matters. Professor John McWhorter, director of the linguistics program at Columbia, points out that not all “otherness” is unwelcome: A name with positive cultural connotations in America, say a French or Italian name, may come across as “pleasingly exotic.” But during the Cold War, people with Russian names were more likely to be isolated due to contemporary politics.

Even Apple has been accused of name stereotyping: In the wake of the Chelsea bombings in September, the company came under fire for issuing an emergency alert for the suspect that contained only his name, and no picture. For some, this clearly showed that his name, Afghani in origin, was being used negatively, potentially inflaming anti-Arab sentiment.

There is one verdict which I can be entirely sure of: The pronounceability of my name is a disadvantage. In one study, those with easier-to-pronounce names were viewed “more positively” than those with so-called difficult names. Often, this affected the ability of the person to achieve in multiple areas. Difficult names were less likely to be politically favorable, for instance. Simpler names were more likely to belong to higher-ups in law firms. And upper-class women are more likely to give their children mainstream American names. Arminda Downey-Mavromatis, then, is statistically less likely to rise to high rankings in the professional world. Would Amanda Downey have had a better shot?

This naturally impacts minorities and immigrants much more than it would ever impact me. People rename themselves when they move to new countries to escape well-documented name discrimination and throw off immediate prejudices. Professor Latanya Sweeney of Harvard was disturbed to find that Googling her first name returned ads beside the results with the startling, heavily suggestive title, “Latanya Sweeney, Arrested?” Meanwhile, her colleagues with less distinctive names had no such ads when they typed their names into Google. In her own words, “a black-identifying name was 25 percent more likely than a white-identifying name to get an ad suggestive of an arrest record.” Seeing as Google ads are based on an algorithm, it’s hard to determine where this connection is being made: the system or its users. In other words, personalized Google ads are algorithm-based, but is the algorithm racist, or just adapting to the racism of its users?

Miozzo also found this trend among his own students and lab assistants. Many, especially those whose native languages were not as easily transliterated to English, would go by distinctly different, “American” names. In a lesser sense, we Columbia students do this all the time. NSOP was full of names learned and shortened and butchered.

Many Elizabeths go by Liz. We’ve all met a James that prefers Jamie or Jim. There’s an easy psychological reason for this, too. The shorter the word, the less error prone we are. Over time, these nicknames have become standardized.

If I wanted to, I could make any potentially lurking prejudice fall away. Columbia implemented a name-changing policy last year that allows students to be referred to by a preferred name on Courseworks and by professors. For someone worried about the impact their complicated name might have on their academic career, this could be a lifeline. Whether your concern stems from the onerous corrections or a fear of prejudicial judgement, this option is now open to you.

According to the University, since the establishment of this feature, 5,096 students have used the preferred name option. In 2016, 22 Barnard students requested for their legal names be be switched to their preferred names. This year, 17 made the same request.

But we cannot ignore what we might lose when we decide to abbreviate or altogether change our names for the convenience of others. My name holds a deep familial meaning. Arminda was the name of my great-grandmother, who died soon after my birth. In many ways, I carry on that name. My Greek grandparents, wanting a piece of the naming cake, wanted my middle name to be Jordan. My parents, wanting both of their names present, hyphenated my last name.

For some, however, changing their name is not a loss but an act of reclaiming their identity. For CJ Strauss, a sophomore at Barnard, names carry a more significant weight. They have known for a long time that they were transgender, but didn’t reconcile that with what “comes with not being a girl: a name change.”

They came out before changing their name—that was a recent change.

Over the summer, Strauss decided to go by their chosen name, instead of their legal or given name. They are aware of Barnard and Columbia’s name-change policy, but have not yet accessed it.

“That’s something I’ve been thinking about and I don’t know how I feel yet about, for example, my diploma having my chosen name,” they say. “I think for ease, of course, it would always be much faster and much easier if my documents showed up as my chosen name.”

Up to this point, ease hasn’t been an issue. Strauss approached their professors before the semester began and asked for their chosen name to be used. “Everyone was perfectly fine with it and accepting,” they add.

Before the interview ends, they emphasize that, “if you know someone’s ‘legal’ given name or what some people refer to as a dead name and you knowingly refer to that person as that name, that is a hate crime.”

As I read required books for classes, I’m struck by how many unusual names people at this school have no issue learning and pronouncing. Aeneas is no common name. Telemakhos (and its many spellings) is routinely pronounced in our seminars and Literature Humanities classes. Your average aspiring neurosurgeon will be well-acquainted with the terms amygdala and cerebellum. (Though, to be fair, I don’t think anyone says Schermerhorn quite correctly. Schmermerhorn? Schmerherhorn? Schmerhorn or Sckmerheron?)

I know without a doubt that the student body could, with some patience and intention, learn the given name of every student here. Of course, I won’t lie and exclude myself from those who have butchered a name during NSOP, but there is a definite solidarity among those with complex names. The initial surprise someone displays when you say their name correctly is sweet, and at times funny. “Oh wow, people never get it right the first time,” they say. “Don’t worry,” I respond in turn, “My name is Arminda.”