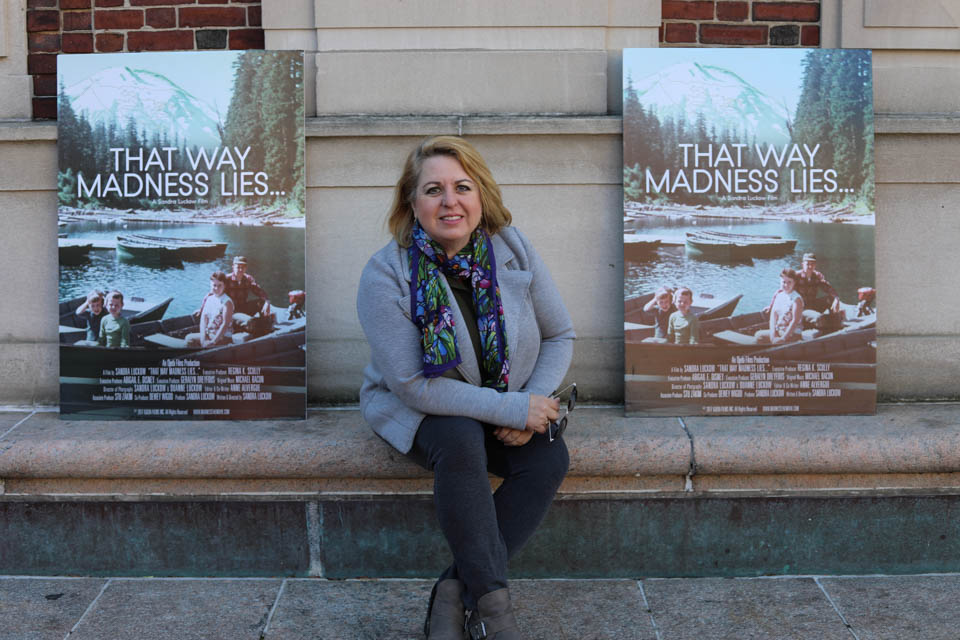 “He is sitting in a jail because he is mentally ill,” Luckow says bluntly.

Luckow, who teaches filmmaking at both Columbia and Yale, has made Duanne’s struggle with schizophrenia the focus of her work over the past seven years, culminating in the release of her documentary, That Way Madness Lies, this year.

“I think this is his eleventh arrest in the course of seven years,” she says. “He’s been sitting there in jail for a month.” Duanne was arrested after returning to his former home in violation of the protective order the new owners have against him, despite the fact that he does not understand that the house no longer belongs to him.

Luckow wonders out loud if Duanne will be sent again to the Oregon State Hospital’s “treat until fit,” or “aid and assist,” program, which aims to treat patients until they’re legally competent to stand trial for crimes they’ve committed, according to the State of Oregon’s website.

“But he’s committed a crime because he’s mentally ill,” Luckow points out. “And then if they cannot make him competent to stand trial, they release him to the streets because you cannot try someone [who is] incompetent.” In such an outcome, Luckow says, Duanne would likely be homeless, as he has been before.

That sort of structural quagmire is what Luckow aims to bring to light and resolve through her work.

Luckow grew up in Oregon as part of a family with quirks right out of a Wes Anderson film. Her father spent hours refurbishing old cars and building his own gyrocopter, while her mother created detailed miniature dollhouses and figures based on her wealthy Mexican upbringing. Luckow herself performed as a professional ventriloquist, and Duanne loved restoring classic cars along with their dad and making James Bond-esque amateur action films.

Despite her current career as a filmmaker, Luckow wasn’t at all involved in Duanne’s films as a child. Instead, she looked up to Hollywood actresses such as Katharine Hepburn and Bette Davis, who portrayed characters whom she admired for their strength. However, at around age 15, she read I’m Dancing As Fast As I Can, a memoir by Barnard alumna and Emmy Award-winning documentary filmmaker Barbara Gordon, and was fascinated by Gordon’s profession. A few years later, Luckow became one of the first students from her high school to be accepted to Yale. When people asked her what her future plans were, she said that she wanted to study documentary filmmaking because she thought it “sounded much more academic and much more scholarly” than acting—her true ambition.

Yale, however, did not offer a film major at the time, so Luckow majored in American studies and took the film courses that Yale did offer. She was particularly inspired by Annette Insdorf, one of her film professors. Insdorf now teaches at Columbia, and she and Luckow are colleagues.

“She was the most articulate and dynamic speaker I have ever heard to this day,” Luckow says. “It felt as though everyone in that lecture hall had disappeared and she was speaking only to me.”

Luckow says that Insdorf’s rhetoric informs her work to this day and informed her greatly about what it meant to be someone in film. “[You] have to completely enthrall your audience, whether it be critically talking about film or whether it be actually having other people work with you on the production of movie,” she says.

Insdorf, meanwhile, praises Luckow’s work, complimenting her ability to examine “the fragility and resiliency of the human spirit” on film. “Working with Sandra Luckow is joyful,” she says.

As a senior at Yale, Luckow successfully petitioned to make a film in lieu of writing a senior essay as her capstone project, which was unheard of at the time. The result was a documentary centered on a childhood friend who was a figure skater about to enter her first national skating competition. Luckow’s work won Yale’s Louis Sudler Prize in the Performing and Creative Arts. Eight years later, that same figure skater, Tonya Harding, became infamous as the Olympic figure skater who hired a man to attack her rival Nancy Kerrigan, hoping to break Kerrigan’s leg and eliminate her from the competition. This sparked more interest in Luckow’s student film.

The upcoming movie I, Tonya, which will be released on December 7, based its portrayal of Harding’s mother on interviews with her from Luckow’s film and uses Luckow’s footage of Harding in its credits.

“I think the reason why my movie did so well in some ways after the scandal is because it was really the only unfettered look at her family, her skating,” Luckow says. “I was making the film without an agenda of trying to push who I wanted her to be or what purpose in the story I wanted [her] to serve.”

Luckow’s latest and perhaps most significant project is That Way Madness Lies, which follows Duanne, diagnosed with schizophrenia at 46 years old with no prior history of mental illness. In 2010, Luckow’s family noticed that Duanne was increasingly preoccupied with conspiracy theories and obsessed with New Age YouTube blogger Jessica Schab. He drove to Canada to meet this “crystal child,” but brought no money or identification, convinced that his “psychic guides would safely deliver him,” Luckow explains in the film.

Duanne was sent to Oregon State Hospital for what he and his family both thought would be “a blip in what was otherwise a pretty smooth life,” according to his sister. Instead, Duanne ended up spending six months in the hospital—the maximum time available to him—and then moved into transitional housing.

Since then, Duanne has shuffled between incarceration, hospitalization, and homelessness. As the film shows, he has enormous medical bills, but sells car parts to send money to Nigerian prince scams and supposed Russian women on the Internet—projects that he ardently defends even as Luckow tries to reason with him.

Central to That Way Madness Lies is Duanne’s own footage, filmed on his iPhone, which he asked Luckow to use. Over the course of a year, he recorded videos reflecting his growing paranoia in the year leading up to his diagnosis and hospitalization. Through this footage, That Way Madness Lies provides a rare first-person account of schizophrenia.

In one scene, Duanne films himself as he stands on the cliffs of Multnomah Falls near Portland, Oregon, shouting “I’ve warned people! I’m a Scorpio! I come from the planet of Pluto! I am here to protect this planet. I am here to bring justice about. There is no justice! This planet is entirely corrupt!”

“I’d never seen anything like it before. I didn’t even really know what I had or how it could be of use in any way,” Luckow says of Duanne’s footage. She tells me that when she showed the scene of Duanne at Multnomah Falls to a psychiatrist at the Yale School of Medicine, the doctor’s eyes welled up.

“He said, ‘Listen, you have to understand, I’ve spent 25 years of my professional life working with schizophrenics every day and yet I have never had the opportunity, never had the insight, to be able to see psychosis like this, as it is happening,’” Luckow recalls. The psychiatrist explained that typically, a patient has already received some treatment or made beginning steps toward recovery before he encounters them. “And he said to me, ‘I mandate you to continue shooting,’” Luckow says.

Watching That Way Madness Lies, I was astounded by Luckow’s determination to do just that. She suffered the loss of both of her parents—her mother in a sudden accident, her father after a battle with dementia—over the course of making the film, which are also documented by it. As she grieved, Luckow had to take on increasing responsibility for her brother’s wellbeing, even as he sent her graphic threats over Facebook, paranoid and convinced that she was plotting against him. I ask Luckow how, in the midst of such personal tragedy, she could stay focused enough to not only advocate for Duanne, but also to complete the film.

“I look back on the past seven years and to be honest with you, I feel that I was in complete and utter survival [and] work mode,” she tells me. “It’s only in the screenings that I’m reliving and experiencing, sometimes for the first time, the emotional level of what happened.”

Luckow tells me that filming the difficult parts of her life for the documentary got her through this period. “There were times when I was really feeling very, very sorry for myself and thought, ‘Okay, this is really terrible for me, but this is really good for the movie.’”

In some ways, Duanne’s case is exceptional—according to the Mayo Clinic, schizophrenia in men generally appears in the early- to mid-20s and it’s rare for adults over 45 to be diagnosed with it. Yet Luckow says that her film has resonated deeply with audiences. She tells me that the question-and-answer sessions at screenings have been mostly comprised of people sharing their own similar stories.

“What has been astounding has been for me to realize that my story is not unique at all. It is frighteningly commonplace,” Luckow says. “The only difference is that I have it recorded.”

Luckow has become a fierce advocate for mental health care reform through her filmmaking. “We need to get mental health policy out of the judicial system,” she asserts with passion. “I think that we need to strongly advocate for getting mental health back into the medical profession in terms of determining policy.”

Luckow has fervent hope that That Way Madness Lies will inspire changes in how mental health is treated and she is determined to have the film shown where it can make a direct impact on policy and medical protocol.

“My dream for this film is to get it shown on Capitol Hill, to get it shown to every member of the government who is on a subcommittee that determines policy. I think that it should be shown in law schools so that people can see, and in medical schools,” she says adamantly.

Sammy Applebaum, a Columbia sophomore, has been interning for Luckow since March. Applebaum took one of Luckow’s summer courses at Yale as a high school student. After arriving at Columbia, he reconnected with the professor and began working with her after talking to her about his ideas for fundraising for That Way Madness Lies.

“What I really love about Sandra’s work is that she really makes what she believes in. For her, the most important thing is having a message that is important to her and her life,” Applebaum tells me. “It’s really about how can I use my experiences and my talent as a filmmaker to actually change the world, and she’s absolutely doing that.”

A couple hours after our interview, Luckow texts me, writing that she thought more about Duanne’s childhood films after I asked her about them.

“I tell stories based on actual events or authentic realities,” Luckow writes. “Duanne always made films that played into his fantasies. I don’t know what that means. But it is an observation.”