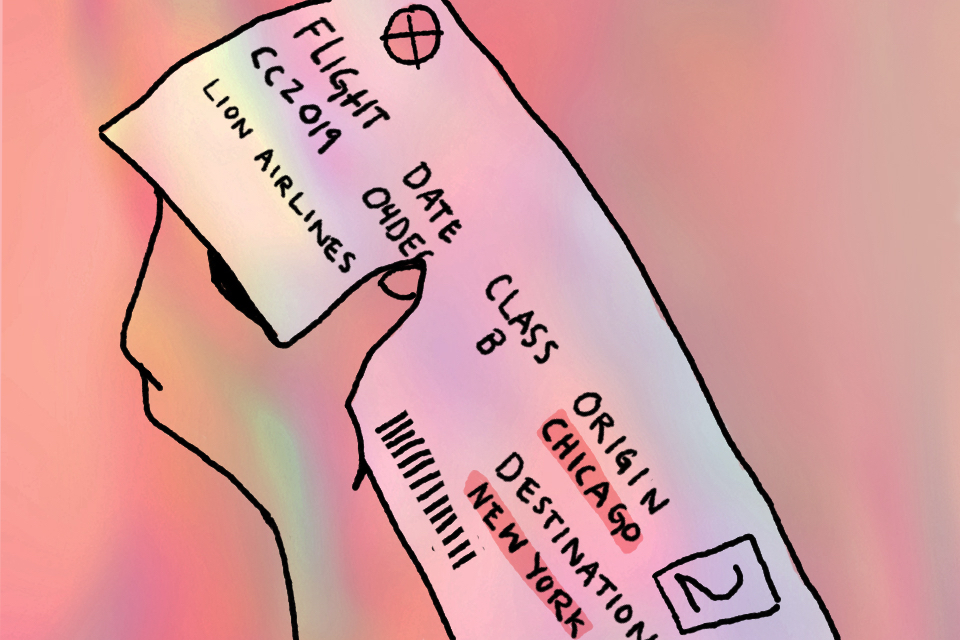 There are few spaces more transient, in between, and decidedly nowhere than airport terminals. I am sitting at my gate at Chicago O’Hare at the end of Thanksgiving break, waiting to board my flight back to New York, shifting back into a New York frame of mind. There are significant differences between the version of me that woke up in Illinois at 4:40 a.m. today and the version of me that will land at LaGuardia. Already, I am quieter, more cautious. My ears, which just a few days ago could pick out the dull Christmas music in every department store, begin to tune out the cacophony. My body makes its way to New York City. My mind curls inward.

O’Hare has a corridor in Terminal 2 that is always decorated. Come Thanksgiving, it is strung with holiday decorations and lights, a glistening pathway to your flight. Last Thanksgiving, I posted a photo of the hall on Snapchat and immediately received a response from a close friend from high school, Cassie.

I looked down at my phone, confused. I thought it was obvious from the geotag.

I gaped at my phone. I hadn’t seen much of my high school friends since graduation, with all of us working and many having left for college sooner than I did. Cassie went to Santa Clara in California; aside from me, she was the only other person in our friend group to leave the Midwest for college. We’d been in pretty constant contact, bounded, I think, by our coastal experiences. It was hard to explain the East Coast college transition to my friends back home. Cassie, in her own way, understood that.

“What gate are you at?” I shot back. She sent me the answer, along with an urgent plea that she was “boarding soon, get over here!!”

I ran down the terminal hall that connects gates H to gates K. Even as I locked eyes with her, I kept running.

It was a very dramatic airport reunion. My suitcase fell out of my hands as we hugged. The people around us looked very confused. We talked for about 20 minutes, comparing our past three months gleefully. Both of us were far from home, far away from the comfort of the Midwest. She spoke about laid-back Californians and the number of people majoring in computer science. I spoke about the energy of New York. She boarded her flight. I boarded mine.

New York was a shot of caffeine straight to the bloodstream. Quickly, my unexpended energy found home in the pace of the city—the rush of passersby, the frenetic nights, the way the waiter, right off his shift, had already lit his cigarette. But I think about home often. The way mornings begin with pauses, looking out the window at the park across from my house, noting the changes in weather with actual, genuine interest. At home, standing in line guarantees a conversation with those behind you. Here, striking up a conversation with a stranger at Westside Market is anathema. I have learned from experience that chatting with a barista will earn you a smile from the barista and glares from those behind you in line.

Being a Midwesterner in New York, especially amid the rush of Columbia, means standing out for your disposition. “Midwesternness” is not a real word, but it sure as hell is a personality type. It’s the hold-the-door-for-someone-too-far-away impulse. The track-winter-weather-predictions personality. It entails a level of care and attention you find in the Upper Peninsula of Michigan and the farming towns of Iowa. I used to have it. I think I’m losing it.

It took a whole year and many befuddled looks for me to stop answering, “How are you?” with a rundown of my day. The urgency of everyday living in New York and the stress of attending a school as fast-paced as Columbia do not allow for the same consistency of well-intentioned pleasantries.

The parts of being a Midwesterner that I love to claim as my own have begun to fade. At home, I am neither entirely Midwestern, nor am I a New Yorker. But while I’m in the airport, I don’t have to be either; I’m just another member of a crowd with too many bags and bags under their eyes.

I wonder if everyone savors these in-between moments, when they don’t have to be from anywhere, where they can sit between destination and point of embarkment.

It’s natural to alter yourself to fit your surroundings. Anyone coming to Morningside Heights from outside the East Coast feels the culture shock and tries to adjust accordingly. For me, New York is a puzzle into which I still cannot quite fit myself. If I lose my Midwesternness, my bring-food-to-every-event sensibilities and my talk-to-strangers tendencies, I’m also losing a large part of myself.

I think there’s an incompatibility of these two impulses. The Midwest feels politer and more genuine because it can afford to be—sometimes, it has to be. The winter months are dark and damp and cold. The pace is slower. If we weren’t social and kind, those four dreary months would be even harder to bear. During long cold winters, I used to hate the way the world moved back home. I mistook relaxation for stagnation and stability for lack of ambition, not seeing the care and attention in my home’s traditions, informal or otherwise.

For many Midwesterners, weather is a topic of genuine interest. A particularly cold winter (here’s looking at you, polar vortex) requires planning and neighborhood coordination. In my cul-de-sac, there is no greater hero than the driver of the snow plow. When the plows can’t keep up with the sheer volume of snow, we all emerge from our houses with shovels. A few families bake bread and cookies for anyone clearing the driveways and streets. The kids take turns shoveling snow and jumping on the mounds. Each family contributes some salt to keep the remaining snow from freezing over.

The last time it snowed in New York, the snow turned to slush. People were grumpy. I only saw a few thanking the doormen and snow plowers that cleaned their paths. Fewer did the cleaning themselves. It was baffling to me, to see a community of people far larger than my own entirely isolated from one another.

There are few ethoses less compatible than the languid Midwestern attitude and the constant grind of New York City. I bring the frenetic energy of New York home and become easily bored. I bring the calm of my hometown to the city and I feel like I’m falling behind. Now it seems the skyscrapers of New York are too overstimulating, the wide open spaces of Illinois too flat.

I try, then, to bring both places together in my actions. I’m not sure if it’s working. I know I’m less polite during the school year, understanding that what are considered pleasantries back home are a waste of precious time here. I smile less frequently at the passersby than I used to, but I’m working on that.

I think about going back to the Midwest and try to hold the memory of it in my mind. When I’m home, everything around me feels vast. The drive home from O’Hare Airport reveals enormous forest preserves, lakes, and untouched earth. It used to feel entrapping, full of quieter lives than I wanted, more land than I could ever hope to use. This past break, with its calm evenings and familiarity, gave me an appreciation for my home that I didn’t have before. It was a place to pause and sleep, to smile at strangers and be smiled at in return.

This Thanksgiving, I flew into Milwaukee’s Mitchell Airport, instead of O’Hare. Milwaukee at 10 p.m. was empty, eerily so. My dad—graciously picking me up late at night—and I wound through terminals and hallways to reach the parking garage. The winter cold nipped at my ankles as we looked for the car. No matter how I dress on my flights home, I always underestimate the biting cold. Fresh from an exhausting three months, I sank into the passenger seat, eagerly accepting my dad’s coat as a blanket. We drove for 40 minutes until we reached home, our drive peppered with billboards for fireworks sales, a visual indicator of the approaching Illinois-Wisconsin border. I wondered what version of me would wake up tomorrow. Would I be anxious and distracted? Exhausted? Would I be more cynical?

The lights grew dimmer and dimmer as the cities behind me faded into flatness.

Previous Issue|More In This Issue