New Home, New York: Learning to Share the City with Mom and Dad

New Home, New York: Learning to Share the City with Mom and Dad 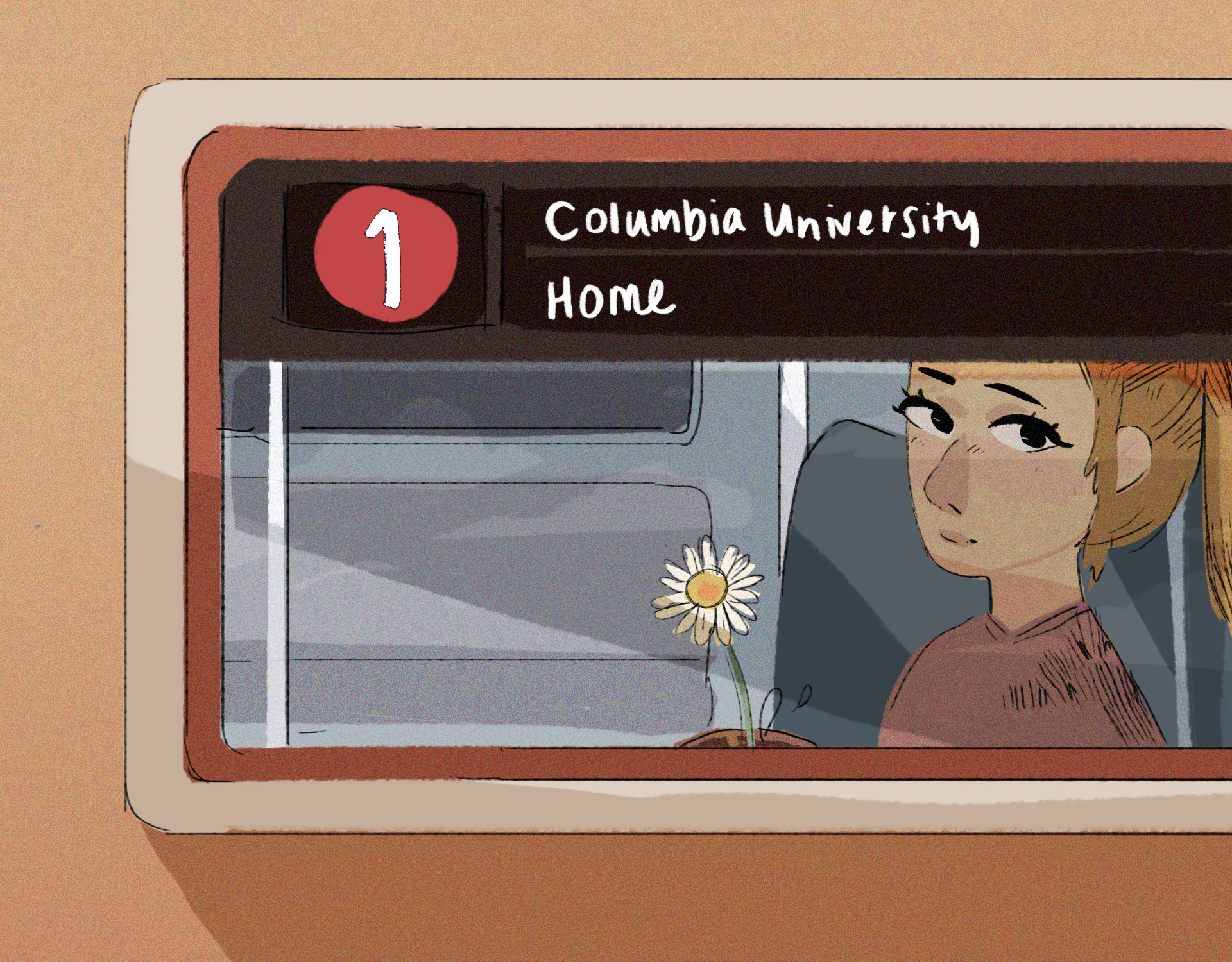 I spent three weeks this July house hunting in Queens with my mom. We spent hours shuttling from house to house, trying to find one that felt right for us. As Mom and I drove, talked, laughed, and listened to music, my excitement grew: My parents were moving from Cairo to New York City.

I started college at Barnard last year living 5,606 miles away from Mom and Dad. They were working at the American University in Cairo at the time, a 12-hour-and-five-minute direct flight, a seven-hour time difference, an Atlantic Ocean away.

As you can imagine, I was hyped when Mom and I found the one. It’s a three-story townhouse with wooden floors and a fireplace, right across the street from Forest Park. Walking around what would soon become our new family home, I thought about the lonely spring break I had spent on campus last year, about the struggles my parents and I faced as we navigated the time difference just to catch up. Now I would be able to leave my winter clothes at home when I didn’t need them, go to my little brother Cyrus’ choir concerts, and have home-cooked meals.

But my excitement was tinged with anxiety. I was looking forward to having my family close, but I couldn’t help being concerned about how this would change the sense of security and independence I had established in my life in New York City. After a year at Barnard, I had left the proverbial nest and learned to fly with my own wings. I felt like I was doing it. It was mine—the city, the changes, the growth.

Nevertheless, I started my sophomore year of college living in the same city as Mom and Dad, less than 20 miles between us. They now reside in Kew Gardens: an hour-long subway trip, 30 to 45-minute drive, an East River away. I’m having to completely relearn the whole college-life-versus-family-life dynamic, and it’s a little weird. 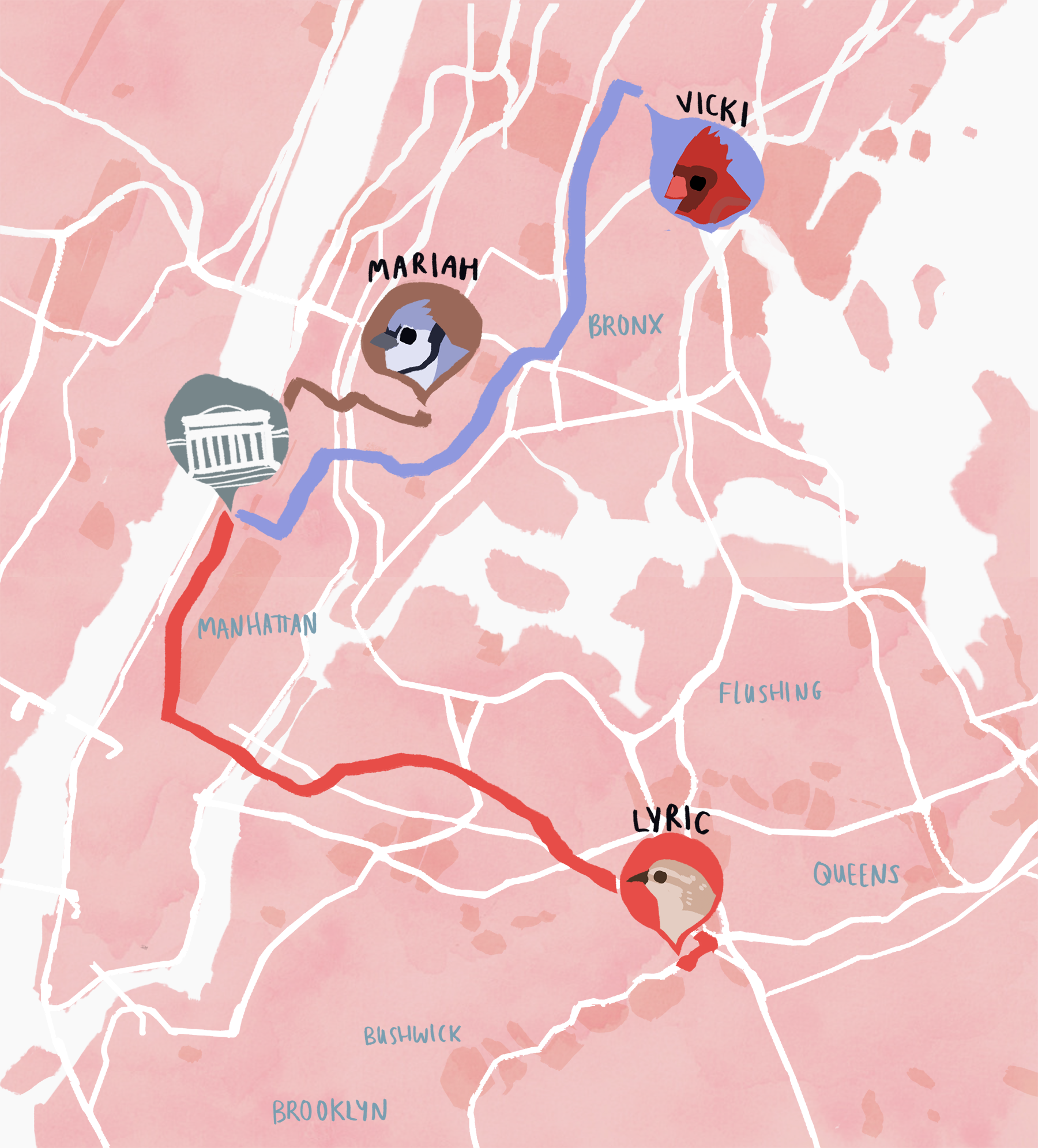 Unable to even internally articulate that weirdness, I turned to other students on campus whose parents live in the city to help me reflect on this experience. I interview Vicki Soogrim, a junior at Barnard, next to the piano in the Lerner Main Lounge. She tells the friend she’d been working with that she’ll be back in 15 minutes, but we end up talking for twice as long.

Now a junior, Soogrim tells me that while she was still living with her parents in high school, they definitely impeded her growth because they’re “very strict and very controlling.” During her first year at Barnard, she hated visiting them. “I remember being on the train and just crying, and being so angry,” she recalls of the trips to her northern Bronx neighborhood. She avoided going home as much as possible, even though she felt pressure from her parents to visit.

For Mariah Marrero, another Barnard junior who I meet the next night, the pressure to visit her mother in the Bronx isn’t always so explicit. She tells me that, before she moved to Barnard, “We were like hip to hip, we were best friends.” Marrero says that pressure to visit home has decreased since her first year, but it hasn’t gone away. “I still feel I am able to detect whenever she misses me, and that kind of overshadows me,” she describes. Because she can easily meet up with family, it’s harder for her to say no to going home.

Mom and Dad have made a very explicit effort to prevent me from feeling that kind of obligation to visit them. “Are you free Saturday afternoon or evening? No pressure, just curious,” Dad texts me today, followed by a kissy face emoji, while I’m in Introduction to Translation Studies. I tell him I’m not free Saturday afternoon or evening. “No problem. Loveyouso,” he responds.

Over text, over the phone, and in person, Mom tells me, “You know you never have to come home if you don’t want to, but you always know you can.” Rationally, I do know this.

And yet, I still feel some pressure from within to be more involved with them, and a soft shadow of guilt because I’m not. As we’re clearing the table after dinner the first time I visit them in early October, Dad tells me, “Having you here, having you with us just makes my life better, makes all of our lives better.” The words are sweet and loving and I smile at them, but they’re weighted in a way they weren’t before.

Don’t get me wrong, it’s not like I don’t want to hang out with my family. And I appreciate how conscientious my parents are. It’s just that not visiting them is now a choice to make, rather than a fact of life. For the first time, I’m having to figure out a balance between home and school. It’s not a bad thing, but it’s different and a little difficult.

Marrero says that having grown up in a tight-knit family contributes to her sense of obligation to visit the Bronx regularly. “My best friends were my cousins, and so we didn’t have playdates with other friends; we had weekends with cousins coming over,” she tells me. “I definitely have always had the feeling that I had to be with family.” Marrero adds that, for her, the opportunity to go to a college like Barnard is accompanied by a sense of obligation to make sure her family back in the Bronx is doing okay. Things like cooking and buying groceries for her mom are voluntary, but she does them every time she goes home.

“Sometimes I feel like I would have been a little bit less stressed out if I had went [to college] farther away,” she says. “But if I were to do it again, I still would have chosen Barnard.”

When I ask Soogrim about her choice to come to Barnard, I’m interested to hear that, like me, she had originally planned to move far from home for college. “They really wanted me to stay,” she says of her parents. “And I was like, fuck that, I’m not doing that.” But after touring some colleges outside of New York City—Smith, Yale, Swarthmore, Muhlenberg—Soogrim grew disillusioned with the idea of leaving the bustling energy of her home city. Just days before the early decision application date for Barnard, she made up her mind. “I was like, ‘I’m not gonna stay for you guys,’” she recalls. “‘I’m gonna stay for myself.’”

Marrero also originally wanted to leave the city. For her, this changed after participating in Barnard Bound, a program that invites high school students of color who are interested in Barnard—especially those who couldn’t otherwise afford to visit—to stay on campus for a weekend. “I just fell in love with Barnard,” she says. “Even though it was in New York City, it was a different New York than I had known. … I was able to feel independent but still feel supported in this environment.”

Marrero and Soogrim also note that their experiences are very specific to New York and Columbia. Soogrim says that having a real campus makes Columbia feel like a “home” too, and that the Bronx and Morningside Heights feel like “separate worlds.”

Marrero makes it clear to me that, while burdensome at times, she doesn’t view the pressures that come with staying in New York City as negative. “Sometimes I feel like ‘family life’ is a three-credit class or a four-credit class,” she says. “An extra class of you growing as a person, which everyone is going to have to take eventually. I like the fact that I’m slowly doing it at Barnard instead of waiting later on to do it. I think that’s a good decision.”

I am surprised to hear that growth remains such a central theme in Marrero and Soogrim’s lives. I realize that, carrying my leave-the-nest anxiety into this year, I hadn’t considered that being close to parents didn’t have to stifle growth—it could do the opposite. “It’s definitely helped me grow so much, being here and being close to home,” Soogrim tells me. “And I’m just really grateful for it because I don’t think I would have grown the same way somewhere else.”

“I’m a very proud Bronx girl with this tight-knit family,” Marrero agrees. “It was important for me not to detach from that, but to grow on it.” It hadn’t quite occurred to me until then that a college student might not want to or be able to “detach,” even if that’s always what they want to do in the movies. And thinking about it now, I’m not sure if I do either.

Marrero goes on to explain that at Barnard, she’s been able to free herself “from the kind of repressive nature that it is to be a Hispanic woman” without totally detaching from her previous life. She tells me that she now recognizes and is critical of sexism, racism, and homophobia in her Bronx community, and tries to spread her new outlook to her mother and little brother.

“It was really great to be at Barnard College and go through his stuff—find my identity, figure out what I wanted to do or what I like to do—and then have [my mother] there and go to her to be like, ‘Hey, I’m starting to learn this about myself, what do you think?’”

Despite the feelings of pressure to go home, Marrero says living near her mom has actually made her become more independent more quickly than she would have at a college farther away.

Last year, I thought the ownership I felt of my new life and self hinged on the ocean that separated them from my parents, my old life. But reflecting on the conversations I’ve had as I write this piece at Mom and Dad’s new dining room table in Queens, I begin to really believe that having parents who live in New York doesn’t impede independence or growth—it just makes it a little different. And those impacts, that difference, will change over time.

Soogrim, who initially had the hardest time being close to her parents, tells me that her connection with them has improved a lot since her first year. “I feel like there’s a really good separation between my freedom and my relationship with them,” she says. “And they understand that, too.” She has made a concerted effort to visit them more often this semester.

“Not only have I grown independent of them,” Soogrim says, “but I’ve also grown with them, and they’ve also grown with me.” This is the last sentence of our conversation, in response to me asking for any final thoughts. I’m struck by this in the moment, strangely moved as the two of us say our thank yous and goodbyes. I want that to happen with my parents too, I think, and I believe that it will. I feel like the weirdness I hadn’t been able to articulate before is becoming clearer. And I understand how, given enough time, it might just become normal.