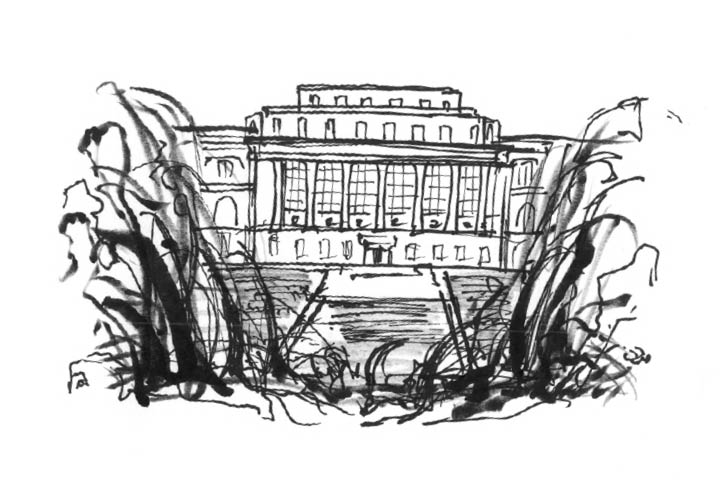 Our lawns in the fall and springtime are easy to describe: verdant and idyllic, yet tantalizingly forbidden, much like Augustine’s pears. Come autumn, those grass patches raise some questions, like “Why are they always closed?” and “Did Obama really play soccer on them?”

And when winter comes: “What’s under the tarps?”

For months on end, the only speck of nature on campus gets whited-out, hidden under suspicious white tarps. Our lawns effectively become like Creed in The Office. It’s easy to forget about Creed’s existence for an entire episode, see a panoramic shot of the, well, office, and notice him winking in the background; it’s easy to forget about our tarped lawns for a day, peek out the windows of Butler 310, and be reminded they’re there.

The fluttering white ghosts that haunt our grounds constitute a quandary that we could term “Schrödinger’s Lawn.” From our perspective, under the tarps, the lawn could simultaneously be alive, dead, or turned into a corn farm run by Matthew McConaughey. To paraphrase Erwin Schrödinger himself, one can set up the following experiment. A lawn is penned up under a tarp along with a small cardboard box containing corn seeds and one Matthew McConaughey. If one leaves this lawn to be for a winter, there is a probability that the Texas Chainsaw Massacre star will have cultivated a thriving crop of corn; there is also a probability he will have hibernated in his cardboard box.

As long as the tarps cover the lawns, we don’t know the state of the grass under them—we don’t even know if it is still grass or not. Is it thriving? Is it dying? Have they sprayed some chemical on it? Has it been uprooted, and replaced with corn husks? Are there, to quote The Notorious B.I.G., “potholes in my lawn”? Besides, and perhaps more importantly, the tarps deprive us of one of Columbia’s most beautiful features for widely unknown reasons.

Turns out, the grass isn’t greener on the other side of the tarp. Walking out of the bowels of Butler, we are treated to a perfectly trimmed rectangle of lawn carcass that somehow has a lot of charm.

That first mystery having been put to rest, it is still fair to ask why the tarp was applied in the first place, and whether Butler Plaza wilted due to its removal or to the frosty vagaries of winter.

It wilted, says Facilities, due to the latter. Actually, they point out, it did not wilt but rather became “dormant,” hibernating, so to speak, until next spring. But the tarps still serve a purpose. Dormant grass is vulnerable to “bad weather,” “stress,” and “damage.” Low soil temperatures lengthen its recovery time—tarps, technically dubbed “turf blankets,” protect it. In fact, the blankets do more than just that, since they allow the grass to become greener faster—a benefit which raises another debate: Would we rather have greener grass in May and turf blankets now, or charming lawn carcasses in the winter?

Beyond that, the state of our lawns is a reminder that realities sometimes fail to live up to expectations, and that the unknown can be more satisfying than the known. Back in the beginning of winter, under those turf blankets lay not grass but an infinite number of possibilities. Anything up to and above our wildest imaginations could be sitting there, hidden from view. It was the best of grass; it was the worst of grass. And as usual, the reality was somewhere in between.