The Columbia Writing Center is at Capacity

The Columbia Writing Center is at Capacity 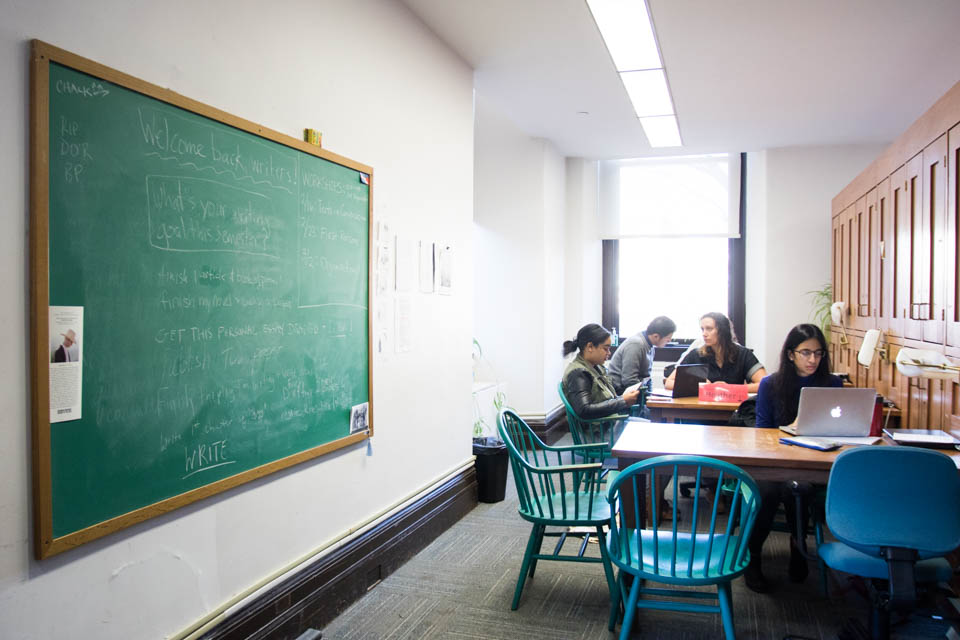 Bleary-eyed and sleep-deprived, I enter 310 Philosophy Hall, the crowded room which houses the Columbia Writing Center. The tables and chairs slot together like blocks in a game of Tetris. Writing consultants and students meet at adjacent tables or in chairs pushed off to a side. At the center of the room, a cluster of students—the ones who, unlike me, followed through on their plan to wake up early and reach the Writing Center just before it opens—sit around a clipboard. I can see they’re about as happy as I am to spend their Monday morning waiting for an appointment. There’s a small sheet of paper covering the sign-up sheet.

“Drop-in waiting list is currently closed,” it reads. There are too many names on the list, and with only two writing consultants tasked with the drop-ins for the day, I’m told I’ll have to come back later.

I grab my things and head to the East Asian Library next door. I come back around noon, snag a spot on the list, and finally meet with a writing consultant around 2 p.m. 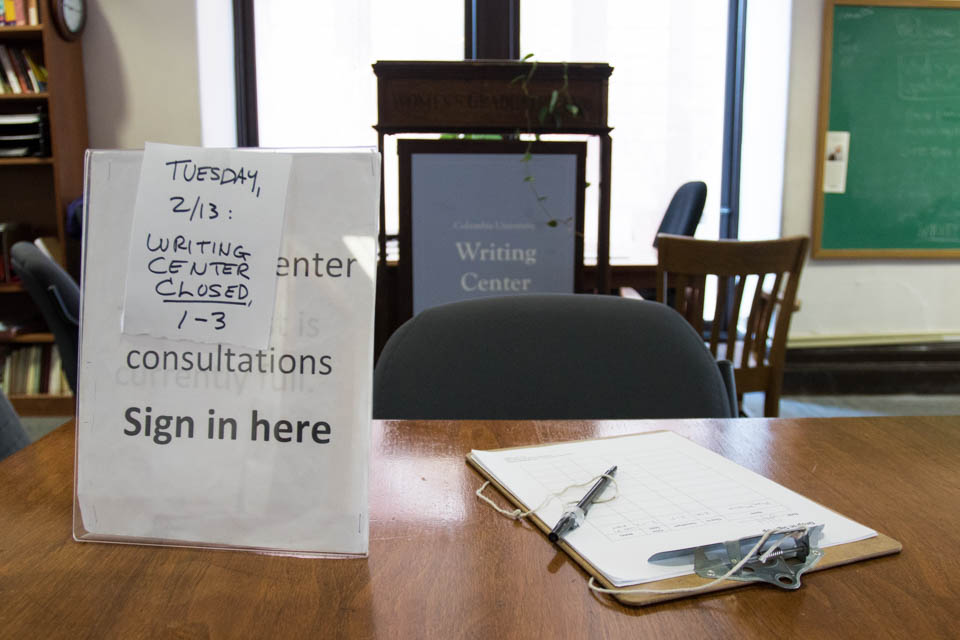 I’ve been using the Writing Center since last October when, prompted by the rapidly approaching deadline of my first Lit Hum paper, I came to 310 Philosophy Hall desperate to turn my page-and-a-half-long ramblings into something coherent. An hour later, I was back in my dorm, working through a second draft with a clear sense of direction. The next morning, second draft in hand, I returned to the Writing Center for a drop-in appointment.

Though the Center has been a valuable resource during my time here, it does have trouble providing appointments for all of the students who want to use it, and demand is on the rise.

“I’ll be honest. It was a surprise to me when I came back this fall to see how high the demand was,” Carin White, a writing consultant who has been affiliated with Columbia University since she began her MFA in directing back in the fall of 2008, tells me.

Since the spring of 2003, the Columbia Writing Center has been a space for all University students outside of Barnard, Teacher’s College, and the School of Social Work to receive feedback on their writing in one-on-one consultations and workshops. The consultants who staff the Center are comprised of part-time associates, graduate students, and undergraduate peer fellows.

Students can also choose to come by the Writing Center during its operating hours, 9 a.m. to 8 p.m., without an appointment for drop-in hours, like I did. This method involves a potentially multi-hour wait after writing your name on the list.

In addition to these consultations, the Writing Center offers recurring appointments to first-generation college students, international students, students working on dissertations, and those registered with the Office of Disability Services. These are offered in six-week blocks and allow consultants to build on each session and assist the writer through multiple assignments or drafts.

The online appointment system opens new appointment slots at a random time between 12 a.m. and 2 a.m. each night. And despite the late hour, these appointments can fill up in minutes.

Last semester, my suitemate came up with a method for snagging one: setting a timer to go off every three minutes. Timing our website refreshes with each ring, we managed to grab two spots by 1:01 a.m., just over 20 rings from the first alarm. Five rings later, at 1:16 a.m., all appointments were filled. Conversations with other first-years confirmed that we weren’t the only ones struggling to make appointments.

Given the high demand, the system tries to prevent students from overbooking appointments. Two no-shows at the Center bars a student from making further online appointments for the semester.

“There’s not really any logic or rationale that we set,” Susan Mendelsohn, Director of the Writing Center, explains of the appointments opening up late at night. The appointments open at that time only because the company contracted by the Writing Center to create the scheduler sets those times. “We don’t have an on-site coder,” she adds. “Again, a full-time job we do not have the money for.”

As for drop-in appointments, well into the semester they can be difficult to attain. With only two drop-in writing consultants working any given day, only around 16 students can be seen via drop-in hours per day. Spending just a few mornings and afternoons sitting in the Writing Center last semester, it wasn’t uncommon to see the drop-in list close.

I ask Catherine Kirch, a writing consultant who came to Columbia pursuing an MFA in creative writing and fiction back in 2012, if she has any advice for students seeking appointments. She tells me to come when the weather is bad—when students are less likely to want to leave their apartments or dorms to make their scheduled appointment, or to wait in line for a drop-in slot.

And though recurring appointments can be a great resource, they have to be capped to allow the space for regular appointments. Mendelsohn tells me that the period of recurring appointment blocks had to be cut from semester-long periods to a period of just six weeks. According to her, these blocks tend to be entirely filled by the second week of each semester.

White has managed to form strong individual relationships with recurring student writers, highlighting the central place the Writing Center can and does have in students’ academic lives.

“I was working with this one student. She was working on her dissertation.” White recalls. “When she completed it, I showed up in her thank you. Whenever we see each other, it’s a big hug, and a ‘How are you doing?’ and ‘What are you writing?’ It began as working together just in these sessions, and then it became a friendship.”

The Writing Center has developed in terms of raw numbers as well.

Mendelsohn explains that one of the largest factors of rising demand is the expanding population of international students on campus. According to data prepared by the Office of Planning and Institutional Research, non-resident aliens currently make up 17 percent of the undergraduate student body, a five percent increase from 2012.

Mendelsohn tells me that international students are twice as likely to visit the Writing Center, and that those who do visit return twice as often as domestic students. As a result, they account for more than half of the students coming in for consultations at the Center.

Mendelsohn remains optimistic about their presence. “As the University becomes a more global place—which is an exciting thing—it really calls on us to meet that need.”

“From my understanding, we’re not going to be able to solve the appointment-making difficulties until we’re able to hire more people,” Kristen Martin, a consultant at the Writing Center who first became affiliated with the University through her MFA program in nonfiction writing back in 2013, told me when we spoke last semester. “We can’t hire more people unless we have an increased budget.”

“Normally, in spring, we add no staff, or one, or two staff.” Mendelsohn says when we speak early this semester. “So this was massive for us.”

A quick look at the online appointment system (though still, for the most part, entirely full) illustrates a tangible difference. The number of writing consultants working any given day has risen from 4 to 6 last semester to upwards of 9.

The undergraduates that have been hired are part of the undergraduate peer writing fellows pilot program, which is a Writing Center initiative intended to help combat rising demand.

“Right now [there are] four people. We would love to expand it to five times that size,” Mendelsohn said when we spoke last fall. “We have struggled for several years now to fund this program; that’s been the major impediment to starting it … and we’re still struggling to get funding.”

The program has since grown to nine people. As fellow undergraduates, these consultants have the ability to relate to undergraduate writers through their own experiences at Columbia.

“There have been a lot of really wonderful moments since they started here, where writers come in, and they’re really knee-deep in Lit Hum, or UW … and I hear the peer writing fellow say to them, ‘I’ve been through this before. I’ve got your back. Let’s do this together.’” Mendelsohn says. “It’s this really nice moment where you can see their stress drop, and they can focus on the task at hand. That’s something that only peers can do.”

The success attained by the Writing Center even before the new allocation of resources seems cause for optimism moving forward, an optimism certainly felt among its enthusiastic staff.

“At the heart of it, Columbia University has a really lively, healthy writing community, and that’s a beautiful thing.” Mendelsohn said to me last semester. “We’ve been really conservative about reaching out … because we can’t in good conscious encourage more people to come if we can’t serve them. … I think, once we solve some of our staffing shortfalls, we’ll be able to do that.”