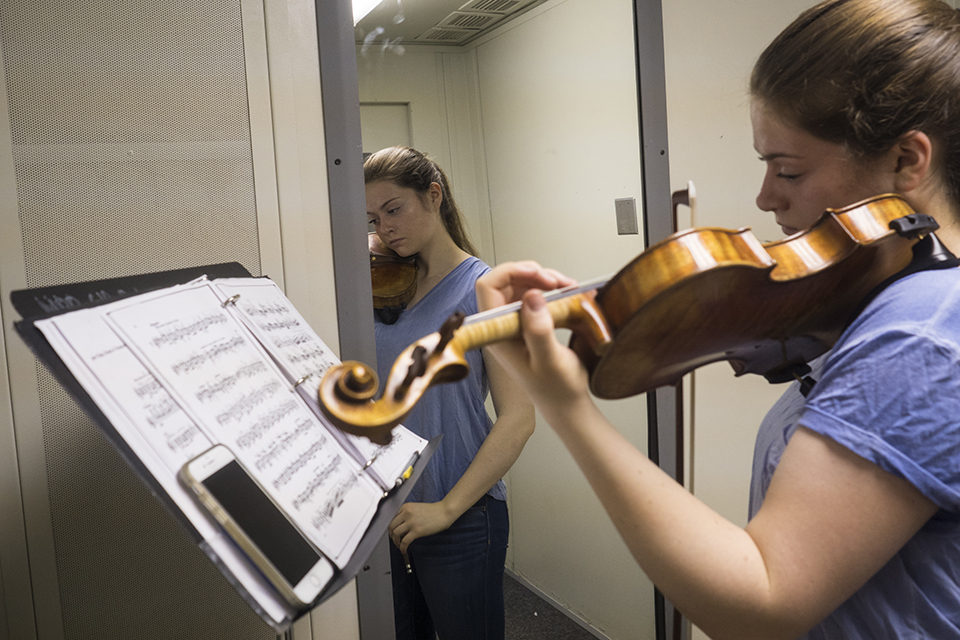 I follow Erika Hubbard, Columbia College class of 2021, into a gray, carpeted room at 7:33 a.m. on a foggy Wednesday morning. There are two chairs, a music stand, and a mirror. The cramped space and the glass panel in the door make the room feel a little like a museum display; but at this hour, no one comes by to listen or stare. Erika sets her violin case on one of the chairs and straightens her music sheets. I am here to watch her practice.

“It is definitely nothing inspiring,” Erika promised me last week.

We are at the very back of the first floor of Carman, past the lounge, through a door that leads into a gray hallway. Another door farther inside seals away the practice rooms.

The room itself is grayish-white, and the twin comforter on my bed is probably longer than the two longest walls of the room. Erika herself is bright-eyed and friendly, just like she was at our 4 p.m. interview a week before. The violin comes out of its scratched, reddish-orange case. The room feels like its own pocket of sound in an otherwise sleepy, silent, 8 a.m. Columbia.

I realize quickly how solitary of an affair music practice is. It’s not the kind of work that you can bring a friend to complain with; the room not only contains the sound, but it also contains you and assumably no one else—today, I’m the exception.

Erika plays with enthusiasm, despite the cramped, dull quarters. She believes the University should try “investing in making it a nice space instead of their trash/broom-closet-like deal,” she laughs. “Which is kind of what it is.”

Erika is a member of the Columbia-Juilliard Program, an exclusive cross-registration program that allows accepted students to receive weekly instruction at Juilliard. The program requires about 30 hours of practice from students weekly. For that reason, Erika makes several trips to Carman each week at 6 or 7 in the morning. Her biggest frustration is the inconvenience of not having a practice space in her own dorm, Furnald.

“If I have 45 minutes in between a class, I spend half my time … just taking my stuff, bringing it over; so it’s little things. But if I only have a small amount of time, it can be tough.”

At midnight a couple days later, I meet Redd Ingram, Columbia College class of 2021, who is a music major and bassist in the Columbia University Orchestra living on the 14th floor of John Jay. Redd has invited me on his “hunt for a piano.” We get very lucky and end up quickly settling in the empty piano in the John Jay lounge. He likes the Wallach piano better; but, after eying the bent and concentrated shapes over the desks scattered throughout the lounge, he decides to double back through the corridor and deal with John Jay’s.

Redd has a test for his music class tomorrow, which is what brings him to the piano tonight. A mutual friend sits reading at a couch nearby, and a small group of students talks at a table located at the other end of the lounge.

Redd begins with something called “ear training,” and I listen to him sing out numbers as he begins to play. At times, he stops to find his place again, and the entire training period is punctuated by laughs and bits of conversation that float over from the crew in the back. It’s kind of nice to have the world still feel like it’s there.

However, without the isolationism and sterile surroundings of the individual practice rooms, lounge areas make music practice difficult in other ways. The wide and frequent use of the pianos, along with the presence of a not-necessarily willing audience, poses unique issues.

“You’ll see why I prefer the Wallach piano,” Redd begins after a brief pause. “Hear that?” He plays a squeaky key a few times until I can hear it, too.

Redd practices piano “almost exclusively after midnight,” because of how rare it is to find the piano benches empty.

“I have a frustrating experience I’d say at least once a week,” Redd explains. It goes something like this: Redd comes downstairs and spots someone at the John Jay piano. So, he walks over to Wallach only to find the same thing and eventually goes to Lerner. But even when the Main Lounge’s piano is empty, it’s hard to sit down and begin playing in earnest with 30 students concentrated on their computer screens or books or papers. Although there are other places with a piano, Redd prefers the one in Lerner 555—but it is a nice piano and so is often busy.

Here in John Jay, Redd plays the piano in earnest, and it’s a rich, melted-together melody that rises and falls, one that I wouldn’t mind falling asleep to (but can’t). At some point, I notice that our friend and his copy of King Lear have disappeared.

Redd talks to himself as he plays—the music is peppered with that’s not right, what? and yep!

When it comes to practicing the bass, Redd begrudgingly remains in his room. For him, the trek to Carman with his bass, with no guarantee of not finding a space, isn’t worth it. But practicing in his dorm comes with other frustrations.

“Essentially every time I practice, I’m putting on a performance for whoever’s outside of my door, and that is annoying because I’m working. I’m trying to work through whatever mistakes that I have, and it’s like I know—even if they’re not—I know my neighbors are judging me.”

Entering the Carman practice room after Joseph Lee, Columbia College class of 2021, and his bass reminds me of trying to squeeze my puffy winter coat into a locker outside of the Barnard dance studio. A crumpled bass cover lies in a heap in the corner; Joseph and the bass stand in the center; the music stand and my chair collectively take up the remaining space. Joseph’s backpack and laptop have been pushed against the walls.

This tiny practice room is one of three in Carman, which are three of the four practice rooms without pianos on Columbia’s campus—the only other sans-piano practice space is a single room in Hogan, accessible only to Columbia-Juilliard exchange students. Rooms without pianos are prized real estate, because rooms with pianos make it impossible for students with larger instruments—like Columbia’s many bassists—to squeeze in a quality practice.

The rooms are given out on a first come, first serve basis only, making a 20-minute search for an available room a common occurrence among student musicians.

I guess Thursday night isn’t a popular time for hunkering down with one’s instrument in the uninspiring closets in Carman, because when I enter the practice room space at 11 p.m., Joseph is the only one practicing. As a member of the Columbia-Juilliard Program, Joseph practices bass about three to four hours a day. Dorm quiet hours begin at 11 p.m. on Sundays through Thursdays, so if he needs to practice later at night, he’ll try for one of the soundproof rooms in Carman.

When I enter the room, Joseph stands before me, shoes off, with one of his fingers bandaged. Joseph’s feet rise and fall as the bow moves farther down and back up the bass.

Joseph says he practices a lot better in the mornings, ideally between 8 and 10 a.m. But last semester, he’d often come down in the mornings to find other people with a similar preference. He explains that he ended up cutting morning practices out of his schedule, as practicing in his room in the mornings would wake his floormates and coming down to Carman before class was a gamble.

Every seven minutes, Joseph’s timer goes off. He warned me about this when I’d first settled in my seat, my knees about three feet from his. When the alarm sounds, he starts playing something else, and the intervals take us from a deep, bouncy tone with short notes to a slower piece of what sounds like the same song—the bum-bidi-bum-bidi-bum of the first several minutes becomes a creeping, atmospheric melody that reminds me of the quiet hour.

Even when he’s able to get a room at Columbia, Joseph notes that the acoustics are not great, and often a chair or a stand will be missing.

“I was telling someone after having been to Juilliard that the practice rooms in Carman make me want to quit,” Joseph says. “...it’s not a very encouraging space, and I know it sounds ridiculous, but I practice a lot better at Juilliard. It’s a lot more motivating.”

But for now, Joseph would like to see a focus on improvements much more practical than turning the Carman rooms into something inspiring: “I think the big thing would just be to know if the rooms were available and to have simple things like a stand in every room.”

Whether it’s the back wing of Carman at 7 a.m. or the John Jay lobby at midnight, scarce music spaces at Columbia introduce some eccentric variables to instrument practice on campus. These include obscure hours and the sleepiness that comes with them, many wasted minutes of room hunting, and the fact that—while one grinds away at violin or piano or bass—the rest of campus is far from being fully awake.