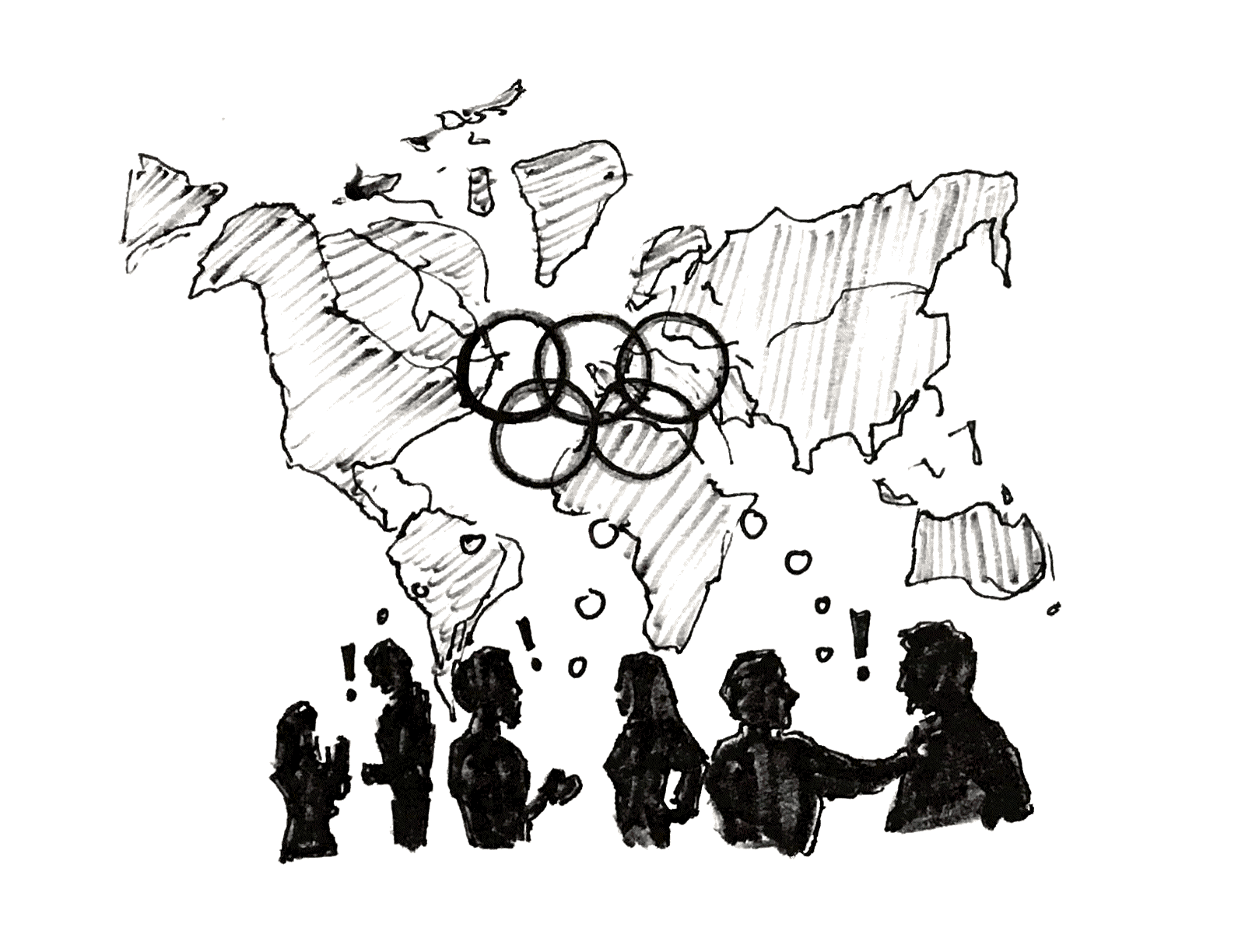 I didn’t even know they were coming. Like the one freak sunny day in February, I stumbled into them by accident, completely unaware that other people had been anticipating them for weeks. I was sprawled in an armchair on the fifth floor of Wallach on a chilly Friday night, taking a study break with some friends, and turned my head fractionally to glimpse whatever everyone was cooing over on the cracked lounge TV. The sight of the eight-pack abdominal muscles of Pita Taufatofua hit me like a brick wall. They rippled and glistened in the subzero weather. A chorus of appreciative (and objectifying) murmurs went up from the people around me as the Tongan athlete swooped the opening ceremony flag from left to right.

It’s now been almost a month since Pyeongchang broadcast their closing ceremony. Life on campus has not so much “gone back to normal” as “continued its existence, never having deviated from normal.” The Olympics didn’t make waves in student life in any revolutionary way. People subsume the games’ occurrence into their peripheral vision every few years, inject them into their daily dialogue as an occasional conversation starter, and move on. Seeing this for the first time as a nineteen-year-old is bizarre. As is the subtle metamorphosis of the structure of shared community spaces on campus during that time.

I’m from Singapore, a nation that has never won a medal at the Winter Games. (Which isn’t a massive surprise; the day that our highest peak gets even the lightest dusting of snow will be a cold day in hell.) So I was shocked to my core when I saw the familiar half-red, half-white banner nosediving from side-to-side, after Slovenia and just before Armenia. 2018 is the first time in history that my country has sent an Olympic athlete to the Winter Games—short-track speed skater, Cheyenne Goh, who failed to skate fast enough to advance to the first heat.

This year, for the first time, I’m in a country that regularly wins medals at these events, and where I can turn on any television and watch every event in real-time on NBC, not three days after the fact in a ten-minute recap. And where I can open my laptop, and not be smacked with the Olympics’ site’s message, “Sorry! This video is not available in your country.” Moreover, I’m in a space, for the first time, where I’m always surrounded—living with another person, studying with friends in the evenings, passing familiar faces every twenty feet or so. It’s a strange and wonderful way to experience the Olympics properly for the first time.

Stranger still, suddenly I’m speaking with people I’ve never spoken to in my floor lounge, leaning against the foosball tables in JJ’s, wherever there is a TV screen and even where there isn’t, like the Carman elevators (“Did you read Chloe’s hangry tweet?") or on Low steps (“Red Gerard… Jesus, dude, that’s my aesthetic.”) Those of us have glimpsed even a single headline of the goings-on in Pyeongchang have at least a few stories to swap.

The first night of the games, I stood in the doorway of my lounge and was painted a spellbinding portrait of the ins and outs of how exactly Russia doped for the 2016 Games and almost got away with it by a Columbia soccer player whose face I recognized but name I didn’t know. I sat next to that same midfielder in the same lounge a few days later when they burst out laughing, and passed me their phone with a knowing look: “I knew it was gonna happen again. Didn’t guess it would be curling, though.” We exchanged theories on how the doping, and its subsequent scandal, had happened, and, more importantly, how we’d game the system better if we were the Russian Olympic Committee.

Wild fantasies of being the corrupt heads of Eastern European anti-doping laboratories aside, these games have also brought us together, in the midst of this grubby winter. By some miracle of psychological group-think, crowds of people watching sports together feel genuine validation together as they cheer their athletes on to victory. For overloaded university students, it’s also an escape from stress over homework, tests, social life—even if that escape is through a cathartic submergence of ourselves in a collective sense of inadequacy. Eleanor Roosevelt said that no one could make us feel inferior without our consent, but Chloe Kim and Red Gerard are doing a damn fine job testing the boundaries of the truth of that aphorism. I’ve had more than one swapping-of-commiserations over the fact that our parents didn’t strap snowboards to our feet three minutes out of the womb. Still, it’s nice to criticize the faulty arm movements of figure skaters throwing themselves into the air in ways that shouldn’t be allowed by physics— from the comfort of our couch cushions, naturally, spraying cookie crumbs everywhere as we do so.

It’s hardly controversial to say that Columbia lacks a definitive community, outside of those flash-in-the-pan seventy-degree days out on Low steps. But whether or not you (like me) have a laughable understanding of organized sports, death-defying athletics bring us together on campus. I never cared about hockey, but there was mad rejoicing in my suite watching Jocelyne Lamoureux-Davidson score that game-winning goal against Canada. We really needed that—as a group of friends, as a university, as a country. And the insanely deadly snowboard 1080 spins that we scream at on the cracked TVs in dorm basements are countered by the absolutely hysterical humanity of certain other athletes. There are squeals over the dogs that the freestyle skiing athlete Gus Kenworthy has rescued. And there are somber late-night discussions, in the age of #MeToo, of the allegations against Shaun White.

Everyone’s relationship to the Olympics is different. Maybe you only really experienced it, in all its glory, for the first time this year. Maybe the only thing stopping you from booking a ticket to Korea for front-row seats to the winter biathlon was your General Chemistry midterm. But it’s there—dominating TV channels and the front pages of news sites—if we want to partake in the culture. It’s an exhibit whose existence means that, for the better part of two weeks, there’s going to reliably be at least a few people gathered in a sky lounge or basement on any given night who you can join. Push the couches together and make a giant raft on which to discuss the final scores of the athletes, who’s out of the running and who still has a chance.

As opposed to the tomblike atmosphere pervading these spaces during the other weeks of the school year, there’s life to be found. In the rapidly-fading afterglow of the games, the air of the morgue seems to be quietly seeping back in. Maybe, with spring almost around the corner of being sprung, that community might come back, inversely proportional to the disappearance of the raw and biting winds that blast their way up the avenues of the city. But it was good to have the games as a source of warmth at the end of winter, at a time when most of us are flagging, exhausted of the chill and the ice, when we needed it most.

Have fun leafing through our seventh issue!