On the Cult of Ginseng

On the Cult of Ginseng 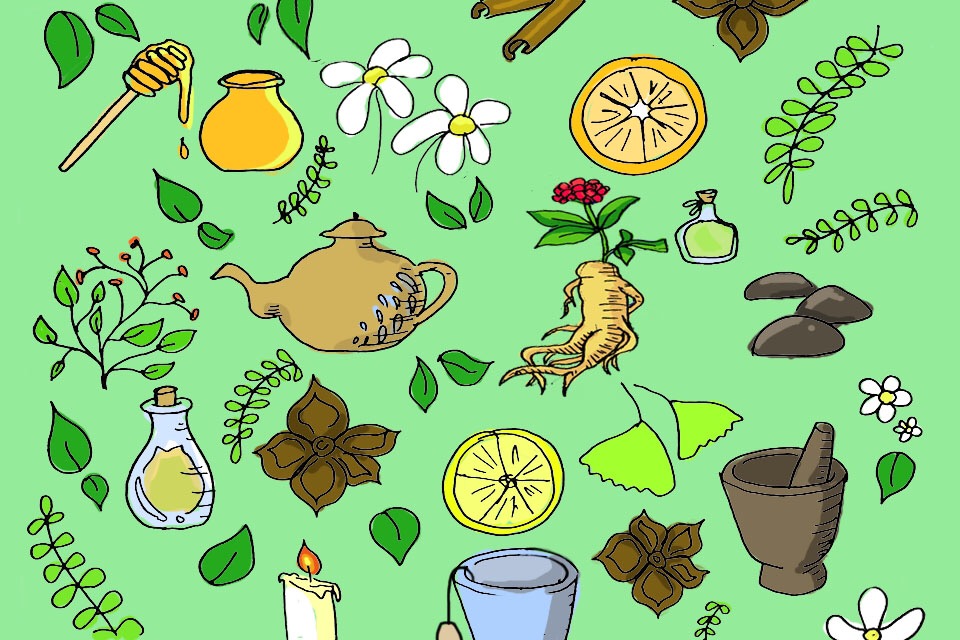 I ground my heel into the patch of lichen clinging to a wayside boulder, about a hundred yards from where my mother stood. She was pointing up to where I could not see. My boot paled under the swinging shadow of overhanging ivy—it was the same green as my home, which sat on the border between town and township, middle and middler class. From this angle, farther up the curved slope of the trail, my mother seemed to have buried her whole hand in the roots of a nearby tree that clung, high above her, to the mountainside.

I picked my way back to my mother, finding my footing through the scattered rocks and roots jutting from the path. She pointed again, to a spot high up on the grassy slope, where all I could see was endless swaths of verdant carpeting. I always found it difficult to follow her instructions, mostly because of our language barrier, but also because of our occasional complete incompatibility. Still, without seeing, I knew my mother had—as she has done on countless trails—identified the wide-bowed fan of the ginseng plant. And I would have to retrieve it.

Like this, I used to spend the summers of my early adolescence hiking through the mountainous state parks of New Jersey. I don’t know if this was a popular activity 10 years ago or whether it still is: I’ve never seen another Asian-American family do so. My father drove us, my mother packed the van, my brother sat in the backseat with me and let me listen to music on his blue iPod Nano. We must’ve hit every trail in the state.

I recall that, in the beginning, we hiked for the outdoor experience, and for memories we might be able to look back on and reasonably call quality bonding time. But one day my mother must have gotten the idea that we could use hiking to strike it rich, ginseng-hunting. Groups of white hikers would curiously rubberneck at us as we abandoned the trail to search and scrounge, our noses in the grass. We were westward-bound immigrants on the hunt for gold, hungry to chance upon the rare and expensive plant hidden among the weeds, to unearth its frail, coiled body, tendrils and all, to hold its shockingly human form in our hands.

An eBay listing offers “Rare Wild Ginseng Root, Very Rare Man Root! Xi Yang Shen, Wild American Ginseng” for $5,000 (+$40 shipping). Sometimes ginseng comes in pairs—as in the accompanying photo—like two entangled fairies. CheongKwanJang, the largest health supplement company in South Korea, claims “Korean Red Ginseng,” known as the "elixir of life,” is a kind of “top-tier superfood” capable of boosting energy, the immune system, and healthy blood circulation while even supporting memory function. My mother tells me that the more human they appear, the more robust their properties. When I see them lined up in flimsy plastic containers, out on display in the Korean supermarket, I cannot help but picture myself lying with them.

My stay-at-home mother, an expat who does not call South Korea home but picks up the Hangul tabloids outside Asian supermarkets, watches daytime dramas on the standard definition Korea-to-U.S. channels.

These are small worlds where the poor are innocent and beautiful and the rich are egoistic and cruel and also beautiful; where boy meets girl (and sometimes, but rarely, girl meets boy) but the girl is poor and the boy is someone’s oppressively well-bred son; where the grandfather of this son—the CEO of a Samsung-esque company, and also comatose—turns out to have signed everything away in his will.

During commercial breaks, the booming voice of someone who is not a doctor declares the miracle health benefits of some essence, or some ground, desiccated root or another, rounded into small packaged beads that are easy to swallow. Middle-aged women, fresh-faced and freshly permed, smile sweetly as they cradle in their hands the cure for all latent cancers. These you may buy right off the TV or two for one (written, “1+1”) in the medicinal corner of an H Mart.

Like the rich powders that turn hot water a thick and bitter red, these 15-second ads steep your living room, even your whole house, in myth and mysticism, offering the best cure for your fears and long, empty hours. Each time you see your mother eating kimchi over leftover rice straight from the pot in front of the TV, you take a sip.

Korean Red Ginseng is so grotesque, so bitter, that it is easy to love. When you wrap the anxiety of the capitalist market in the warm blanket of the Confucian tradition, you get the highly palatable world of Asian medicine. Like any exotic foreign import, it is more potent, more sincere than anything that has come from the confused mind of an incorrigibly modern American.

Even the ginseng itself depends, unforgivingly, on nationality. According to CheongKwanJang, Korea is the perfect environment to help ginseng reach its full nutritional potential. American ginseng produces “only half” of Korean Red Ginseng’s saponins—good, but inferior. Still, my mother hopes for such wonders in the mountains of New Jersey.

My mother likes things she can see and feel for herself; she likes double plastic wrapping at Costco and only buys the second item off of shelves—the one less likely to have been exposed to the grimy, appraising touch of other shoppers. We shop wholesale because she likes good deals. But really, she says, she would spend any effort, endure any inconvenience, shell out any amount of money for our health. Health is an investment with endless returns. When you put it before all else, she says, only good can follow.

One day she came home with a giant plastic trunk from the Home Depot and told us that once we exiled our footwear to this container, our luck would much improve. She put it out on the porch, some steps from the front door, so that when it rained, we had to walk barefoot through puddles to retrieve our boots. When I am at school, I leave my shoes in the nook of my Hartley single. I imagine that in my sleep, the subway grime weeps from their soles and pollutes the room.

Like most mothers, she taught me to wash my hands, but she also taught me to gargle salt water every morning and night to clear my throat of impurities.

After I wake and before I sleep, I treat my suitemates to the loud, guttural echo of my voice through a violently thrashing ocean. You can definitely do that without making the sound, one of my neighbors once complained to me. He exited the stall behind me and politely waited for me to make room for him at the sink. Impossible, I said. I’ve been doing it this way since I was small. But after that night, I would first make sure I was alone.

In the kitchen back home, my mother watching me with a frantic gleam in her eyes, I sipped bitter liquids from opaque, Capri Sun-like pouches. For years, I took shots of balsamic vinaigrette at the first sign of a cold. I downed tall glasses of pure juiced leeks and doubled over in agony, as my mother narrated their exorcism of all my digestive impurities. There was always something new for me to try when I came home from school. Sometimes, I would protest, knowing I could not win. I knew I would be cured, that for a moment of suffering, I would survive long, healthy years.

How different is following her instructions from remembering to pray?

Miles from her, when I feel sickness crawl into my throat, I think of all the days I missed my vitamins, skipped the probiotics out of doubt and defiance. When I am in pain, I feel that I deserve my discomfort but also fully own it. When I visit home and she asks me if I need more vitamins, I answer no. How could you still have any left, she says, you’ve been away from home for so long. It’s because I haven’t been taking them, I say. In the other room, my father flips through the TV channels: Korean, Korean, English.

A friend told me recently that the widely believed health benefits of vitamin C have been disproved many times over and were the invention of a famous, prolific, and now disgraced chemist. In 2002, researchers at the University of Colorado Boulder conducted a study to test the long-standing theory that molecules called free radicals damage cells and cause aging. They found that certain free radicals, in fact, signal cellular repair networks.

I thought of many nights of stirring Emergen-C powder into microwaved water, which fogged onto the lens of my glasses. How the burst of its citrus scent ignited memories of my mother’s heated orange juice when I was homesick from school—my gratitude was stolen, revealed to have been artificially manufactured, and easily sold back to me.

Perhaps the takeaway of these plot twists is that we should not trust everything we’re told—by the scientists, by our mothers.

But in hyperacademic environments like Columbia, it is commonly understood that all knowledge that you or someone you know could come up with is probably wrong. Everyone else is right.

My mother has always thought quite differently: She often tells me that scientists frequently get it wrong, so it is better not to put faith in them at all. But I do not yet understand what faith is. I have realized that I must learn to embrace the discomfort of my agnosticism when it comes to Asian medicine and discern for myself what practices are worth keeping.

My high school counselor taught a non-Western healing elective I reluctantly took to complete my health requirement. Once, she took us to the cross country trail behind the arts wing during class and lit incense in a rocky clearing; she showed us acupuncture and fed us a menu of herbal teas. Slyly, she, the white woman with a degree, slipped me the world of holistic and preventative medicine, the one I had lived in for years. Treat the cause of illness, not the symptoms, she said—it made more sense, coming from someone who wasn’t my mother and was affirmed by my non-Asian peers.

Back in high school, I felt ashamed when I did what my mother told me, even when she wasn’t around, and couldn’t justify it. But I couldn’t, and still cannot, turn my back on her. I may choose instead to be thankful that my parents harvested, from the rich soil of their homeland, their culture and their own bodies, to be dried and refashioned and sold as something else entirely—to bloom under the benevolent gaze of white consumerist culture, that, at least for now, smiles down upon our curious Asian practices. I must decide between selling out or buying in. I have carefully let myself feel pride in that this is a choice that I can make on my own.

Looking down at the trail, I watched my mother put her cupped hand to her mouth and call out to me. She said to come back down. Another group of hikers split in two to pass her, as water does around an immovable rock. They seemed so small, so far below—still, I hid my face in the brush. I imagined that I heard them laughing, remarking how industrious, how desperate and Asian we were. As I raised my head, I hoped that in the dizzying scramble upward, I had not confused poison ivy for a miracle.