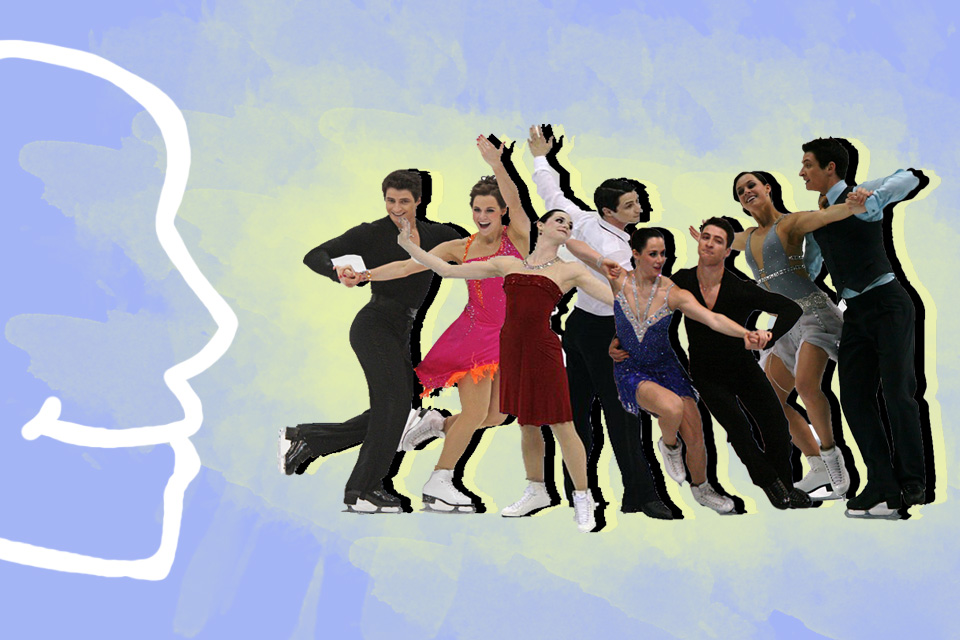 When the music stops, they’re leaning backwards close to the ground, holding a final pose just above the ice and smiling. After a beat, the applause begins—there is an uproar from the crowd. The two dancers stand still—looking at one another for a few moments, shocked and ecstatic. It is 2010, and Tessa Virtue and Scott Moir have just secured gold at the Vancouver Winter Olympics.

Two thousand miles away, eleven-year-old me is losing her mind over them.

I fell in love with the sport as a proxy for my newfound love of Canada. I came to Canada in the summer of 2007 memorably—high out of my mind on painkillers, courtesy of a toe recently shattered in a door. I left Canada wanting to relocate there permanently, charmed by Canadians’ wildlife, demeanor, and snow in June. I channeled my obsession through the Vancouver Olympics, transitioning my longing for Canada into a peculiar new obsession: Olympic ice dancing.

Naturally, I was riveted. The pair’s 2010 gold medal win was a personal victory to me. While I was busy angsting away my middle school years, the two of them had been training. While I bumbled through my preteen years, they had been busy ensuring that every last movement was perfect.

Ice dancing looks deceptively graceful and natural, like ballet, or equestrian. But it is a rigorous sport, with un-enviable workouts—the kind of high-intensity repetitions even a Crossfitter could respect. Dancers’ routines involve a clever manipulation of physics. In a handful of routines, Tessa grasps Scott by the shoulder and stands (yes, stands) on his legs. The move is a powerful display of athleticism and composure, both holding their positions while Scott has skates, literal knives, digging into his legs. Comparing the pair to any other ice dancing couple is fruitless, impossible actually.

As the Sochi Olympics approached, I checked in on them periodically on fansites and the rare piece of sports journalism. How were they placing in Skate Canada? At the Grand Prix? They had to be the best. They had to place gold. For me.

In 2014, as the Sochi Olympics began, I was in the midst of my second semester of sophomore year of high school. Discussions of college plans, as well as SATs and ACTs, were beginning to dominate the classroom. Everything revolved around these things, along with taking the most AP classes possible. Racing heartbeat, quick breaths were the soundtrack to my day-to-day routine. The night before major tests, I wouldn’t sleep at all. The day of the exam I would show up exhausted and jittery, a ball of frenetic energy unable to shake the thought that this could possibly be the test that would determine it all.

But Tessa and Scott were the opposite. In the face of injury and a literal gold standard to live up to, the two kept their cool. If they were nervous, it rarely showed.

Ice dancing is a relatively unknown sport. At least, it was back then. (Tessa and Scott’s stunning performances in Pyeongchang shot them to Ellen level fame.) At the time, no one I knew had heard of ice dancing. It quickly became my escape, untouched and unhindered by the world around me.

This world was not always a comfortable place to be. A scholarship kid at a wealthy private school, I never quite found my footing. I was too loud, too energetic, too opinionated. My life was guided by an unhealthy perfectionism. Each day was my own Olympics, an opportunity to prove I was worthy of my education, my place in the world. A bad grade (looking at you, 65 on my calculus exam) became a bad week—each small mistake compounded.

At Soch 2014i, Tessa and Scott were good, but not incredible. They skated mostly clean programs, but the spark, the inventiveness, of Vancouver 2010 was missing.

They placed silver, which, to be clear, is no small feat. In the face of Tessa’s ongoing leg injuries, a neck injury from Scott and immense pressure, the two skated beautifully. They were a gracious second place.

I thought about this routine many times over the next four years. Good, but not incredible. Well executed, but not quite golden. Their victory had been sweet and hard-won. Where had the magic gone? More than anything else, Vancouver was the result of partners who genuinely liked each other. Sochi was a shock to me, a rare moment of competitive honesty. They were perfect, but they weren’t daring.

In some sports, playing to perfection follows a fairly consistent formula. Ice dancing is constantly shifting in style and prominence. Tessa and Scott broke the mold in Vancouver but couldn’t rise to their own standard Sochi. They were victims of their own success. Looking back to my sophomore and junior year, it is hard not to see the parallels. My focus on perfect grades, excellent extracurriculars, and good behavior was stifling. I couldn’t celebrate a win without moving on to a new challenge. My life was, by all measures, very good. But I wasn’t happy. No risk, no reward.

I wouldn’t learn that lesson myself for a while. The following year was still dominated by a pressure to be perfect. The pace of every day, the unnecessary pressure, wore into my patience and my sleep. While Tessa and Scott were plotting an Olympic comeback, I was growing bolder, less tolerant of expectation. Others kept their college lists in the Midwest and manageable. Mine grew in size and in distance. Why not London? Why not New York? Why not apply to sixteen schools? I kept my ambition silent, soon becoming an expert in dodging college-related questions, afraid that my boldness would be for nothing. Acceptances came in; rejections did, too. There was no longer any fear of failure. Just a fear of falling back into a life I was bored by.

During all of this anxiety and uncertainty about my next four years, there was something reassuringly familiar about ice dancing. I don’t play the sport, but I know the rules. I can scrutinize the much-ridiculed twizzles, the silly name of the deceptively simple in-sync twirls across the ice. I know when a lift is balanced and when it is not. When I watch ice dancing, that’s my whole world. For a few hours, there’s nothing but 40-degree ice rinks and overly-bedazzled costumes before my eyes.

By the time Scott and Tessa took the Olympic ice this year, it had been over a year since I had moved to New York. My life, while kinetic and sometimes overwhelming, was happier by a mile. I felt more centered, more focused, more stimulated by New York. Exhausted and overworked, I bribed myself with a gift. Finish your work, and from 10 p.m. to midnight, it can be you, and Tessa and Scott, and Pyeongchang’s Olympic ice. Their last Olympics. Your last night staying up late to watch them skate.

The first night, during the short program, I was bundled in my fuzzy tan blanket, eating Trader Joe’s peanut butter pretzels. I only had forty minutes of coverage (thanks, NBC). I rolled my eyes as the commentators made the same tired argument that had dominated their coverage for months.

(Rivals? Please. The French team was good, but nowhere near their level.)

I chomped nervously on my pretzels. My mind was racing with a familiar high school nervousness. What if, what if? What if they fall? It had happened in a warm up. What if the judges are biased against them? What if the chemistry, that now-famous tension, wasn’t there? There was a certain irony in my high-stakes relaxation: As the rest of the world was winding down, my fists were clenched, my eyes darting. All the anxious energy of the week prior, full of lab reports and long days, focused on the NBC live stream.

I feel guilty about it now, but my heart was too clenched then to care. I watched Cizeron and Papadakis take the ice. They looked confident and skated, flawlessly.

Please. I thought. One last time.

As misfortune would have it, the otherwise technically skilled and graceful French pair suffered a devastating wardrobe malfunction seconds after my silent prayer to the ice dance gods. I stared at my screen, slack-jawed, contemplating whether or not I was secretly omnipotent. The French were now at a slight but critical point deficit from Tessa and Scott. It would all come down to the long program.

I can’t tell you exactly when I began crying, but it was likely when the cameras, nosy as they are, zoomed in on the two of them embracing. They held onto one another, syncing their heartbeats (quite literally), readying themselves for their last minutes competing on Olympic ice.

They stepped onto the ice. My heart leapt. The program began.

Roxanne is not an easy song to dance to. They moved swiftly between characters, from seducers to lovers. My heart broke as Scott mouthed the words to Tessa. The pair was daring, risqué even.

I stood, a foot from the widescreen TV, and sobbed. I blinked the tears out of my eyes, trying and failing to focus on their routine. I knew the steps already. I knew they were doing spectacularly.

The song ended. Scott yelled in triumph. Tessa laughed. Almost 7000 miles away, I couldn’t stop crying. When their scores were announced, Scott lifted Tessa into his arms and twirled her. I jumped up and down, frantically texting my mother the good news.

You would think that Scott and Tessa’s newfound fame would be a dream for me, but I’m mostly ambivalent. The pair’s glamour was never what drew me in. Ice dancing provided a world for me to immerse myself in when I couldn’t process my own. My own reality suits me just fine, in all it’s messiness, it is something I have learned to lean into, not run from. I’ll make mistakes, and fall, and get up again. I won’t do it as gracefully as they can. But they’ll never be far from my mind, dazzling, daring, mine.