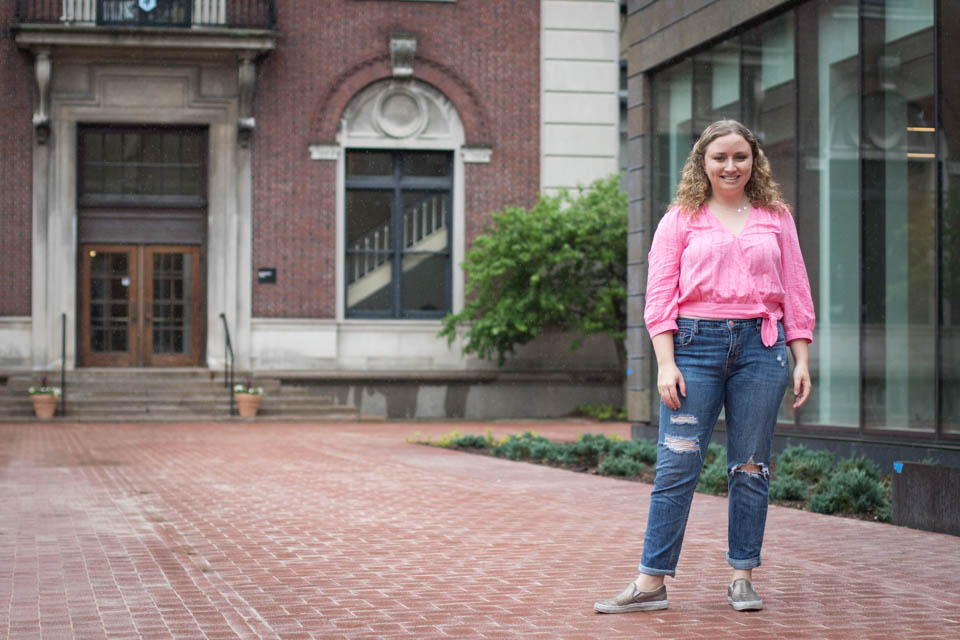 When I meet Angela Beam, I find her chatting with a student from Millie 10, the NSOP group she led as an orientation leader two years ago. Halfway into our conversation on a porch in front of Milbank Hall, Dean Avis Hinkson emerges out of building and shouts “Angela!”, and the two wish each other a good summer. At the end of our interview, as we leave Barnard’s campus, she exchanges waves and mouthed hellos with Dean Rebecca Grabiner. When Beam started at Barnard, all she hoped for was to be an active member of campus. After four years, it’s clear she’s far surpassed mere campus involvement.

“I just love student government!” Beam says. The political science major, who was born and raised in Texas and spent most of her life in a tiny town near San Antonio named Boerne (pronounced BURN-ee) admits she’s sometimes a caricature of herself: an over-enthusiastic Student Government Association member. But she doesn’t mind. Beam was the president of Barnard’s SGA this year and has been a member all four years of college.

We joke that Beam’s legacy in SGA will be her push for more open hours on the Diana roof. But in fact, for her tenure as SGA president, Beam will be remembered for fostering stronger relationships with student groups, specifically activist and identity-based ones. As president, Beam has been involved with everything from Barnard’s divestment from climate science deniers, to its affiliation with the Worker Rights Consortium (an organization devoted to protecting the rights of workers who make college apparel), to SGA’s initiative to bring guest speakers to every meeting, particularly those from student groups, so that student government could serve as a better liaison between students and the administration. She tells me her main goal as president was to bolster SGA’s presence on campus. She wanted to reach people from all corners of student life and put their voices front and center.

When I ask what parts of her tenure will continue after she leaves, Beam says, “I hope people remember what it’s like to have an engaged SGA on campus … and continue to put pressure on SGA to actively represent the student body and engage with them in similar ways.”

You could map out the course of Beam’s time at college by the people that inspired her. When Beam wandered around the Barnard campus as a prospie, it was a group of students working at the Barnard merchandise store that convinced Beam to come here—not through persuasion but admiration.

As a first-year, Beam visited the activities fair and met Julia Qian, the SGA president at the time, and felt similar admiration.

Then it was professor Paula Franzese and an author Beam read in her class, Bryan Stevenson, who motivated and ultimately inspired her to pursue a career opposing capital punishment. The day after graduation Beam will drive back to Texas to work at a nonprofit law firm in Austin that represents people on death row.

Beam says she wants future Barnard students to appreciate the Barnard midnight breakfast before finals, the green lawns, the reading room on the third floor of the Diana Center, but most importantly, to continue forging relationships with Barnard, its faculty, and its students.