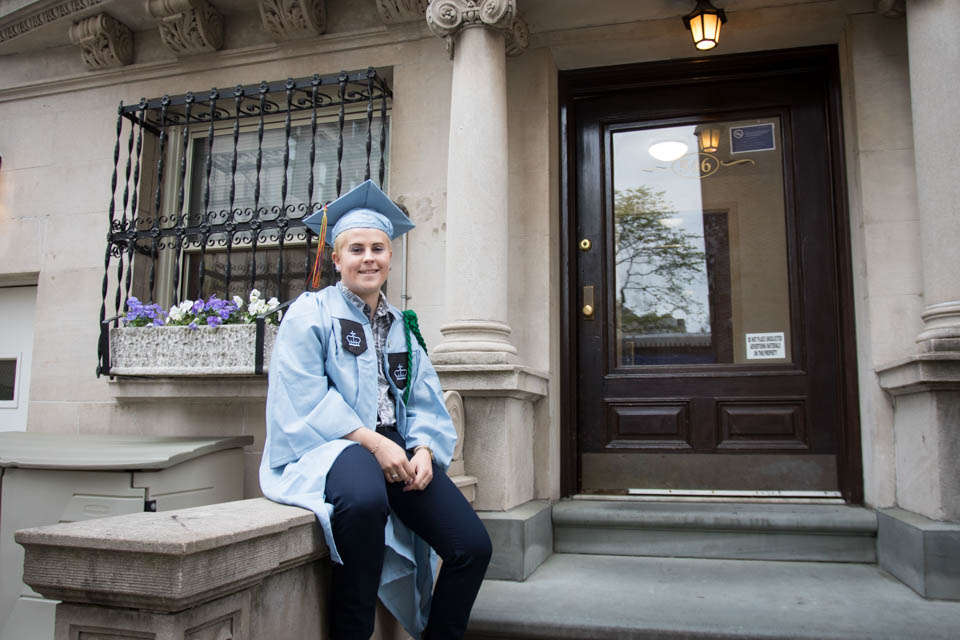 Rowan Hepps Keeney pulls back the sleeve of their Barnard admissions office T-shirt to reveal a roughly four-inch tattoo of the tesseract—a cube within a cube; a two-dimensional manifestation of a four-dimensional analogue—from the novel A Wrinkle in Time on their bicep. Hepps Keeney loved the story growing up, but that was only a minor consideration when they decided to get inked; they mainly wanted an epidermal reminder of the time they played Calvin in CU Players’ 2016 adaptation of the novel, a role, they say, that changed the course of their Barnard career. Playing Calvin was how they met their current girlfriend, but it was also the moment they realized there exist places in mainstream theater for nonbinary actors.

A Wrinkle in Time made Hepps Keeney confident that the theater will always remain one of their great passions. This assurance persuaded Hepps Keeney, who arrived at Barnard intending to major in psychology, to pursue instead a major in women’s, gender, and sexuality studies and a minor in theater, with a custom concentration on activist theater.

In their ability to dissolve the boundaries between their personal life and academic career, Hepps Keeney brought their experiences as a nonbinary individual into the classroom and established themselves as a trans advocate, a performer, a Barnard tour guide, and a student. In addition to studying theater, Hepps Keeney served on the board of GendeRevolution, was a resident in Q House, and was a member of Jewish Voice for Peace.

“No matter what I do with my life, gender will always come into play. There is nothing that you can ever do in the world where power structures won’t come in.”

Hepps Keeney’s major helped them see the fluidity between personal life and academics and realize why lived through experiences matter in a classroom context. They believe that all perspectives are colored by identity and privilege; candidly sharing personal experiences could only lead to more academically rigorous conversations.

Theater provided a perfect stage for them to practice this ideology.

For Hepps Keeney’s final thesis, they cocreated a play titled “Asterisk” with fellow senior Christine Aucoin. The play follows Nadia Patoyari, a trans playwright from the future, as they call upon three generations of trans individuals: a drag queen from the Stonewall era, an activist from the 80s AIDS epidemic—Ellie, whom Hepps Keeney portrayed—and an actor from the 2010s. “It’s really a play about how to understand your own identity, relationships to other people, and what community means, especially as a trans person,” Hepps Keeney says.

Though Hepps Keeney recognizes that the theater department and theater groups on campus are pushing to be more inclusive, they still see a lot of “sleaziness” among students, thus leading to “tokenization” of characters who are minorities. Moving forward, they hope that students will feel encouraged to pitch projects featuring politically relevant narratives that challenge and question the audience.

After graduation, Hepps Keeney, who was raised in West Chester, Pennsylvania, will be flying out west to San Diego. They will share a townhouse with their current girlfriend, best friend from home, and best friend from Barnard. Hepps Keeney is still in the midst of finding a job, but they hope to continue their work as a trans advocate there.

I ask Hepps Keeney who they would most like to portray on stage. The list follows: Elle Woods from Legally Blonde, Puck from A Midsummer Night’s Dream—“such an androgynous character. … there’s so many fun things I could do with a role like that”—and Rocky from The Rocky Horror Picture Show.

Smiling, Hepps Keeney tells me that they had wanted to audition for the role of Rocky in their first year at Barnard but held back because they felt uncomfortable with their body. Hepps Keeney finally played the part in Columbia Musical Theatre Society’s annual rendition of the musical last fall.