No Ethical Vitamin Consumption Under Capitalism

No Ethical Vitamin Consumption Under Capitalism 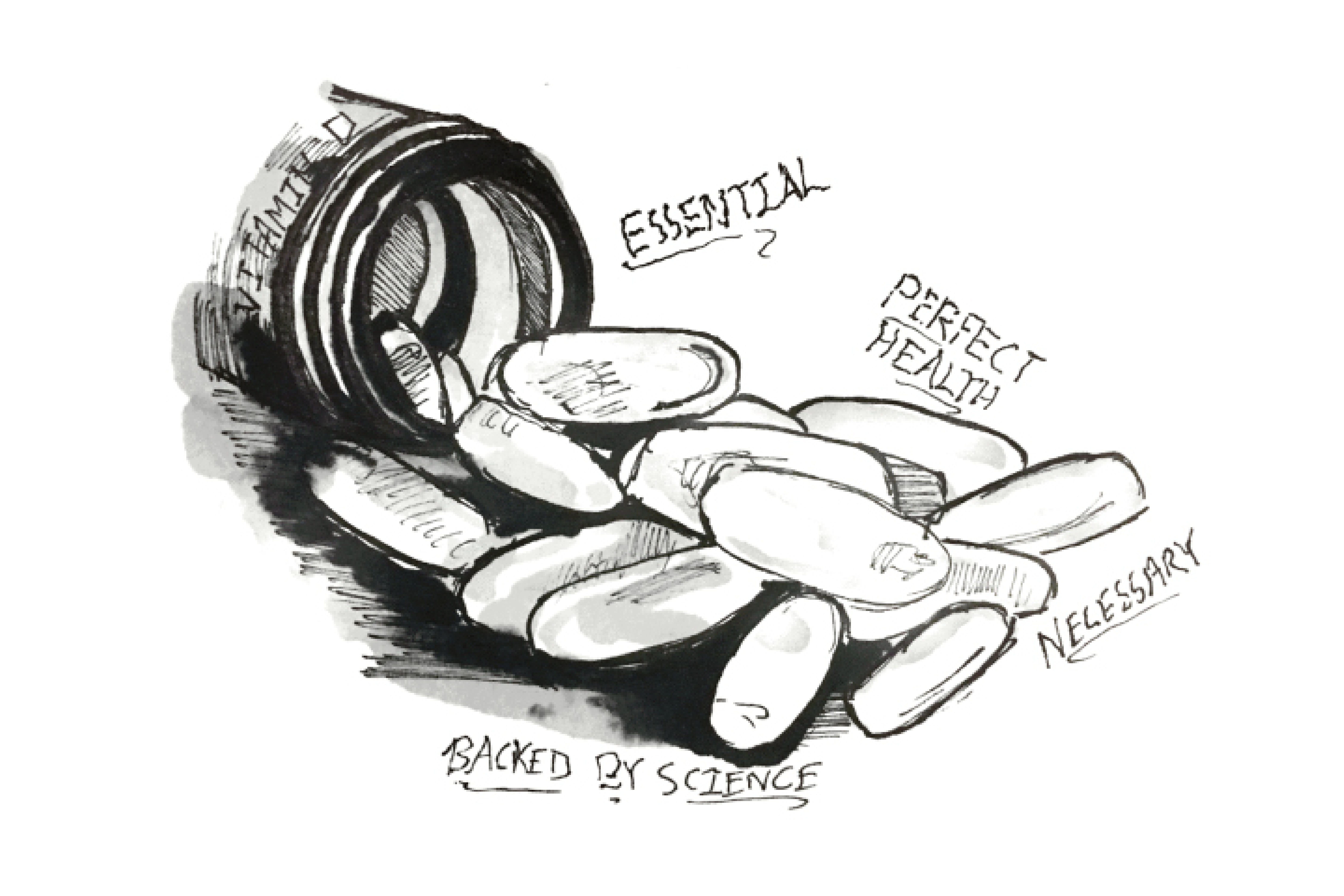 After living in a self-imposed-but-doctor-suggested quarantine in my Sulzberger Hall double during a bout of the bird flu as a first-year, I found myself riddled with insomnia and in a consistently sour mood. A visit to both the Barnard’s Furman Counseling Services and Primary Care gave me a reasoning: vitamin D deficiency. My levels, according to blood testing, were low. It would explain the poor mood, the lack of sleep. I gratefully accepted the diagnosis, making my way to a pharmacy to purchase vitamin D pills.

After a few semesters of chalky vitamin D tablets, the taste of which caused me to choke at least thrice, I was ready for an alternative. This past summer, which I spent working in Washington, D.C., I took a break in vitamin consumption. Shockingly, other than a bout of unrelated food poisoning, my health was pretty much business as usual.

Returning home to Chicago from D.C. towards the end of the summer meant stuffing my yearly medical visits into a small timeline. Shuttled from practitioner to practitioner, I rattled off my daily medications. Vitamins were noticeably absent.

But at an afternoon jaunt to my local Target, I noticed them. The physical packaging of Olly’s vitamins stood out. I picked them up. My mother, a Ph.D in public policy who specializes in health care, scoffed at me.

It was not entirely to fault. My choice was the product of targeted advertising and bright packaging. Meet Olly, the vitamins hidden in Ellen videos (sneakily behind Kristen Bell), in the posts of Instagram influencers, and on the shelves of your local Target (or if you live in Morningside Heights, your not-so-local Target). They’ve got fun flavors (berries!), fun colors (who doesn’t love a good dark purple!), and don’t taste like chalk.

“You know those are meaningless right,” my mom told me. I put them back.

And picked them back up, a week later, at the Target on 34th Street. I was going from extreme outdoorswoman to library-bound mole rat. I would need some vitamin D. A week into diligently chewing the gummies, I came upon this article from the New York Times. Here’s a summary: That vitamin D deficiency I had was based on standards set by a bunch of people with financial reasons to label my levels deficient. This story is not unique. Supplements, vitamins, and powders all comprise a $30 billion dollar industry. Olly’s is only a part of that.

Olly’s Vitamins are not FDA approved or evaluated, but according to their website, “Our team ensures any claims we make about the ingredients in our products are fully supported by published scientific literature.” Scientific literature is a nebulous, non-specific term that takes advantage of a consumer’s lack of science publication knowledge. There are thousands of pieces of scientific literature published every year, some of them are steps in the right direction, some will be disproven years down the line, and some of them are based on data so bad there’s a litany of literature against it. Here’s a list of other products supposedly supported by published scientific literature: coffee, wine, chocolate. They may not be inherently bad, but blowing up a handful of results to generalize health is dangerous and ignores experimental conditions. And here’s a sign that you should be skeptical of a product boasting scientific backing: they don’t provide the studies.

I take the Perfect Women’s Multi. It has vitamins A, C, D, E, B's, Biotin and Folic Acid. Could I get these from a well balanced diet? Probably! Is that a lot of work and planning? Sure is! Do these vitamins in fact contain any of these vitamins? No idea! I’d sure like to see your studies though, Olly.

And who doesn’t want to be a perfect woman. That’s what they’re selling here, to be clear. Health as a means to perfection. Some slightly shady science in exchange for some slightly satisfactory self-esteem placebo pill. Or gummy.

And at a place like Barnard, health is more than a private understanding of one’s body. It’s a moral clause, an academic value judgement, a prohibitive marker of self. So supplements, cleanses, and detoxes feed a wider narrative: that women, no matter their actual health, need improvement.

To be clear, this isn’t a call out to Olly, a company that almost certainly means well (or however well a company can mean within capitalism). I’m skeptical that their multivitamin is any more necessary for me than the other, chalky ones that sit in Olly’s bright shadow. And if you trust the Journal of the American Medical Association—which I sure hope you do—there’s little evidence that I, a healthy 20 year old, need to be taking any supplements at all. That vitamin D deficiency I was facing was more than likely the result of being self-quarantined and not seeing a lick of sun for almost a month.

So I should probably stop taking them, and if you’re at all concerned as to whether or not you should take a vitamin, you shouldn’t blindly trust a company with a bottom line or a writer with a bone to pick (me). Ask your doctor. Seriously, people, the answer to the vast majority of your health questions is ask your physician. Get a second opinion from someone with years of experience—not from an influencer.

Have fun leafing through our first issue!