On Being Detoothed and Unloved by my Favorite Dog

On Being Detoothed and Unloved by my Favorite Dog 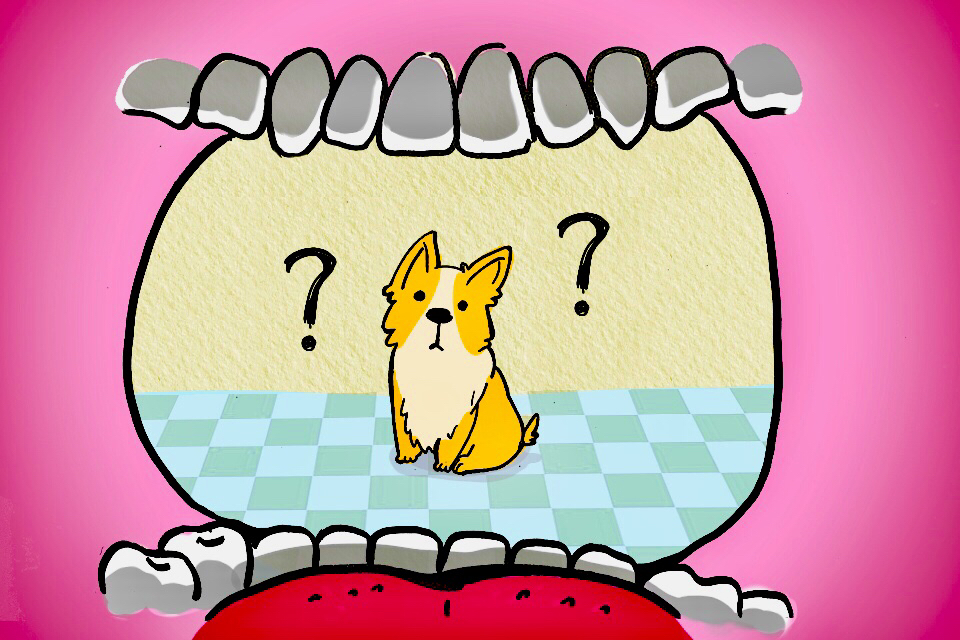 Last summer, I had four wisdom teeth yanked out of my mouth. In the days afterward, I was puffy-cheeked and achy-jawed, with a stubborn, drug-induced droopy eye. I was comically miserable.

Wisdom teeth extraction is a vexingly common form of suffering. I am one of the last of my friends to have had the procedure—the result of many years of concerted efforts to convince every dentist I knew that I didn’t need it.

Then I found out that my body had made it physically impossible for my wisdom teeth to come in. Surgery would be necessary because my mouth, my oral surgeon said without an ounce of humor, was simply too small. Apparently, this remained true during the surgery: I woke up with a purple bruise that stretched from the left corner of my mouth to my jaw.

From far away I looked like the victim of a kindergarten art project, purple marker streaks smeared across my cheeks. Up close it looked more like battery. But the world did not grind to a halt after my wisdom teeth were unearthed, which makes sense in retrospect. I stayed home with my dog, Nina, who is a fluffy, butt-shaking tan corgi. I love her. She loves me—loved me.

But not after the surgery.

Nina wouldn’t get too close to me. Sure, she would let me pet her, but, like the Voldemort-Draco hug, her heart wasn’t in it. Instead of bounding up to sit by my side or constantly prodding my hands with her snout to try to pet herself, Nina now sat at the other edge of the living room. She couldn’t see that, puffy-cheeked or not, I was still the same girl who could make her leg do that twitchy thing when I pet her in the right spot.

After being rejected by my dog, my confidence was so shattered that I wouldn’t even touch pudding that day—I sucked on a juice pack instead. I stayed hungry. I noticed that it was eerily quiet at home.

I’m the kind of person who has a running daydream in the back of her head. It’s rarely coherent, instead appearing like vignettes that I can return to whenever I’m bored. I know I’m not doing well when there’s nothing playing. The surgeon must have done something when he took out my wisdom teeth, I thought, because after the surgery, there was nothing. Maybe he dug too deep and ruined my hyperactive circuitry.

My brain didn’t reply. Its silence scared me because it reminded me of a time before college, and I didn’t want to relive it.

I opted to fall asleep instead, wrapping my covers around myself like a cocoon, roasting in the bedroom that somehow avoided our air conditioning. It took me a while to fall asleep. I hadn’t talked to anyone that day. They were busy with their own lives, anyway. And I was being melodramatic.

The next morning (morning being noon), Nina grunted from her love seat. She adjusted herself on the cushion to make sure her corgi butt was angled in the strangest way possible.

“Less puffy,” I told her, poking my left cheek to prove my point. But Nina maintained her distance. I went over to pet her. She tolerated it. I shuffled to my room and took a two-hour nap, stuffing gauze in my mouth before walking to my bedroom. She did not make a move to follow, and I made the resilient decision to moodily pace my house instead. I was the captain of my own fate, as long as my fate stayed firmly indoors and close to pain medication.

While walking, I felt heavy, and the silence tugged at my sternum, making me slouch as I walked around the house. I did not like this feeling, and I did not want to think about how long it would last. It reminded me of that time I do not want to remember.

There was a time in my life when, even though I didn’t feel a silence tugging at my sternum, the weight was just constant. For a multitude of reasons, most days had a baseline dullness that I couldn’t avoid. I’m not sure if it’s what a psychologist would deem depression, but I knew that my friends didn’t feel the same way. I thought I would spend most of my life unhappy.

Only a few of my friends ever found out that high school was an incredibly rough time for me. I settled for being an observer of the world instead of a participant, which is why I kept investing in my writing. It, along with a change of circumstance, helped me heal. At first, writing was just a window into my current psyche: I wrote an entire mediocre novella on the life of a static character in a world of dynamic change. The crux of the plot centered around him realizing that he was always the same while his friends, whether thriving or suffering, lived slightly different lives each day. Soon, however, the stories got funnier, more hopeful, dark but with meaning, and much better written. I imagined significance into the life I was living.

By the time I transferred to Columbia for my sophomore year, I was the happiest I had ever been in my entire life. I felt incredibly lucky to be in the situation I was in, especially since Columbia’s reputation for poor mental health had almost scared me out of applying. I found a great group of friends, felt challenged by my classes, and fell in love for the first time during my first year here. To me, being consistently content was not something I really knew. It was amazing in a way that those who have never felt such a heaviness may not realize.

Feeling happy was the best gift in the world. I never wanted it to stop, and as I flew back to Texas after the end of my sophomore year, I realized just how incredibly sad I’d been when I was younger. The circumstances I was in had been much worse back then, and luckily my fear that I would never be happy was disproven. Things got better so quickly it felt magical.

Things were so much better now that to be sad seemed almost ungrateful to me. I could imagine a younger me shaking her head. She had incredibly frizzy hair, wore anything that could make her seem invisible, and was perceptive and witty despite how she felt. I cared a lot for her, which meant I had no choice but to stay as happy as I could.

Considering how good my life was, that couldn’t be too hard.

Until I woke up in excruciating pain. I let my thoughts wander while I waited for it to go away.

They ended up at this place: I had no right to be as unhappy as I was. I’d gone through much worse things in life than wisdom tooth surgery. And what if I got sad and the sadness stuck? What if I couldn’t engineer another miracle to get rid of it again? What if feeling sad about a dog was just the start? I took some hydrocodone that my surgeon had given me.

I didn’t tell anyone about how I was feeling during my arduous recovery, in part because I thought I would sound ridiculous. I was two weeks away from flying to a two-month-long internship with a news organization in Hong Kong. I was living a life I hadn’t known was possible a year ago—achy gums and aloof dogs weren’t good enough reasons to talk to someone.

I really wanted to talk to someone.

Painkillers give you super weird dreams. They also make you forget them all. You’re left with the vague feeling that you may have done something wrong, but nothing to back it up or exonerate yourself. At 4 a.m., I woke up confused and in a whole lot of pain.

Maybe it was newfound gumption, or maybe it was the hydrocodone that made me pick up my cell phone, hazily tapping at its keys. I texted a close friend. He texted back.

There was a tenderness and sympathy I had not expected, and I started to cry. I cried about my corgi not loving me, and my gums hurting so much that they itched, and being afraid of failing at a job somewhere across the world that I felt I didn’t deserve. I started to cry about things people normally cried about, and as I cried, and he wrote back, I began to feel normal again. Not happy, but normal.

That friend didn’t think that my guilt about grief was reasonable. He couldn’t have known how much I was crying, but the sentiment still made me feel better. And, as he pointed out, I did just have four bones gouged out of my face. That made me laugh. Perhaps tonight was the time to test the utility of pessimism. I let myself cry until my face hurt.

I made peace with everyday sadness. In my mind, I balled it up into yarn and detangled it from that dull, dark fog from before. They weren’t easily mistaken for one another anymore. Suddenly, crying like a baby for a vexingly common reason felt like the mature thing to do.

We chatted until 5 a.m., and then we both fell asleep, mid-conversation. Those kinds of conversations never have real endings, anyway.

The rest of my recovery wasn’t as miserable as before. I ate a bagel—it was toasted, by the way, which provided me with the axiom for the following theory: This sadness wasn’t the enemy. It was temporary, and if that gray, dull feeling ever showed up again, I knew how to fight it. My first line of defense would be warm, toasted bagels.

I barked her name and she stuck her tongue out at me. Then, she sent a borf in my direction (the kind of bark that resounds in a pup’s chest). Then, she jumped up onto the couch.

She, being a dog, did not answer. She did rest one paw on my leg and use her snout to nuzzle my hand onto her head. She was content like that for a moment, sporting my palm as a weird hat. Then she realized I wasn’t petting her. She whined. I relented. My face was still bruised, but she didn’t mind. She was just stupidly happy, and I, for that moment, let myself just be OK.

Have fun leafing through our third issue!