A Barricade Fell at the Global Citizen Festival. We Thought We Heard Gunshots

A Barricade Fell at the Global Citizen Festival. We Thought We Heard Gunshots 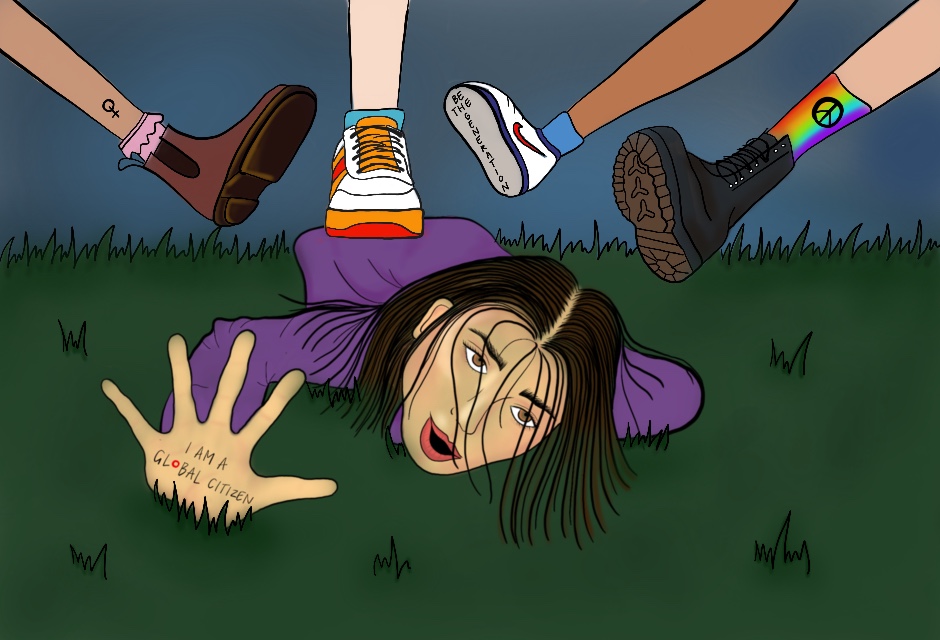 Author Sangeetha Bharath requested her friend, Claire Easton, who accompanied her to the Global Citizen Festival, to illustrate her piece, seeking to visually reflect the experience they shared at the event.

View From Here
By Sangeetha Bharath

It really wasn’t that bad, I tell myself for the 100th time, burning my fingers on hot fries from JJ’s, aimlessly swirling ketchup around with them.

My friends mention a party happening later. I say it could be fun. I eat more fries. Some of my friends decide to head back; sleeping early sounds better than drowning in more sweat and loud music. Not tonight. The rest of us go.

I am dancing. The cups scattered on the floor look like the cups from earlier today. The cups over which I tripped. We dance more, and screams ring in my ears, but they’re only people singing.

We sit together in a small grassy clearing, humming along to music and waiting for the next performance to begin.

As the sun sets, everything turns dark, like watercolor bleeding into paper. And like the colors streaking across the sky, the reaction spreads fractally—arbitrarily and turbulently—through the tens of thousands of people in Central Park on Sept. 29, 2018 for the Global Citizen Festival. We’ve been at the festival all day for a series of performances organized for global causes like environmentalism, gender equality, and universal education.

We turn our heads to the stage and find ourselves face-to-face with chaotic darkness—silhouettes running, accreted into a powerful wave, readying to crash down and into us.

We are still on the ground. Cross-legged, hands pressed into the grass, in stillness.

When getting shot in a public place becomes topical, the phrase “sitting duck” accrues a certain bitter, ironic relevance.

My friend grabs my arm as the six of us stumble forward, trying desperately to stand up and kick ourselves into movement. Everything I am holding falls from my hands. I am seized with panic. A bystander in my own body, I lose control. We just run.

The word shooter feels like a self-evident whisper in this giant rising crest of panic. Everyone knows it and so everyone runs.

The barriers surrounding the crowd at Central Park, set up for the festival, become jail bars. The once-beautiful trees and greenery of the park become obstacles—reasons you can’t make it out.

Groups of friends sprawl in different directions. I fear getting caught in pockets of empty space. Being alone—being conspicuous—makes you a target. My friends and I keep falling over each other trying to latch on to larger groups of people, and we are caught in this broken, jarring pattern until it happens:

A cup, an obstacle, a foot—something catches on my ankle and sends me flying toward the ground, my left hand still gripping my friend’s palm. Don’t let go, I want to yell. I’m being dragged along a rough canvas. I kick my legs frantically into the air, trying to lift myself off the ground and onto my feet.

My head hits the ground, and I can’t scream. My one free arm extends to find some sort of balance as I struggle to hoist myself up, as I continue to be pulled by my running friend. He tries to lift me up as we go, and, almost autoscopically, I watch myself claw hopelessly for balance, choking on air.

For a moment—just a moment—I am on my feet. But only seconds later I am tripped again, as part of some cosmic joke, dragged again, and then yanked up again.

I grasp my friend’s hand as tightly as I can, palms white with the loss of circulation. I am running, leaping over trash and people, trying not to fall again. Panic bubbles in my throat, stinging and hot, racing through my bloodstream.

I’m looking for familiar faces. Instead, I see tear-streaked cheeks, legs bloodied from falling and running and trampling. I see lost children and children clutching frenzied parents. I want to breathe and scream and cry all at once, but, sprinting, I’m unable to do anything at all.

We surge over barricades and bumps, not bothering to look back anymore. Any moment, my thoughts are frenetic. Any moment, I’m screaming in my head, it’s going to be me.

I wonder what it will feel like when I get shot too.

Ten minutes later, or just about, we are out of the chaos, but it feels like it has been hours. Time has no meaning when we are running for our lives. It is only by the time we reach the corner of Madison Avenue and East 80th Street that I feel like I can breathe again. Those street signs are burned into my brain.

All around me, people are sobbing, on the phone, delirious, searching fervently for their loved ones.

We stand there, like silent statues in a bustling sphere of noise and activity, still reacting, still processing.

And then news alerts began to flood my phone. No shots fired. I scroll frantically through social media. Breaking tweets from NYPD News say the sound was a fallen barrier. I search through other accounts for confirmation. A fence barrier collapsed. You’re all safe. Everything is fine. Nothing happened.

I didn’t think about it much that night. I stayed in my friend’s suite in a different residence hall until 3 a.m. eating cookies and listening to music. Everything was fine. Everything was just happening around me.

But when I went back to my room for the night, I stayed awake until 6:30 a.m. I couldn’t fall asleep, helplessly consuming articles and reports on the event. Maybe it was shock; maybe it was confusion; maybe it wasn’t anything at all.

I woke up at noon the next day and stayed in bed for an hour, unsure of what had happened or where I was. I became aware of bruises all over my body. I looked at myself in the mirror, tracing the sides of my back where I had hit the ground while being dragged. My knees and legs were tender to the touch.

And still, that morning, I told myself everything should be fine. There had been no gun. There was no real threat, right? The physical pain from what we endured didn’t seem to mean much to me.

The CEO of the festival apologized that people couldn’t get back into the concert but failed to reflect on the fact that 60,000 people ran for their lives after someone stepped on a bottle.

What we felt isn’t really what happened, after all. The New York Times released an article within hours. A small panic, they wrote. 60,000 people running for their lives. Small panic. We are fine.

But it wasn’t really a small panic. Not to us, at least. Coverage of the event prioritized the details of how the panic started over the trauma that it caused. All the articles I read told me this: Barriers fell, water bottles were stepped on, no shots were fired. I had most of the facts.

Media coverage of the event and organizers’ statements used language like “small” and “brief,” and the hosts of the event were quick to get the festival going again in spite of the injuries and trauma experienced—portraying the panic as one of minute significance.

Yet everything felt so real when we were running from a nonexistent shooter. Our reaction was immediate, visceral, involuntary.

The news told us exactly how the panic started, but it couldn’t explain my bruises or my friend’s sensitivity to the sound of crushing plastic bottles.

I realized I was using the media to dictate my reaction, convincing myself our collective response to the noise and panic was inconsequential, ignoring the systemic societal problem that triggered the panic.

No single gun engendered the turmoil we experienced, but mass panic from the thought of one did.

And if there had been a gun, our bodies could have been added to the count of people who’ve died when popping noises turned out to be more than just falling barricades and bottles being stepped on.

Standing there on Madison and East 80th, I open my most recent messages with my father back home; the last words—those which I do not fully recollect sending—read, active shooter, and love you.

The concert organizers release statements, saying everything is fine. Everyone is safe and the festival is back on! Issuing proud declarations of ostensible safety, news platforms tell us what happened.

They tell me how to feel. We breathe, capsized in a sea of relief, because nothing happened.

I call my parents to tell them everything is fine.

Everything is happening around me.