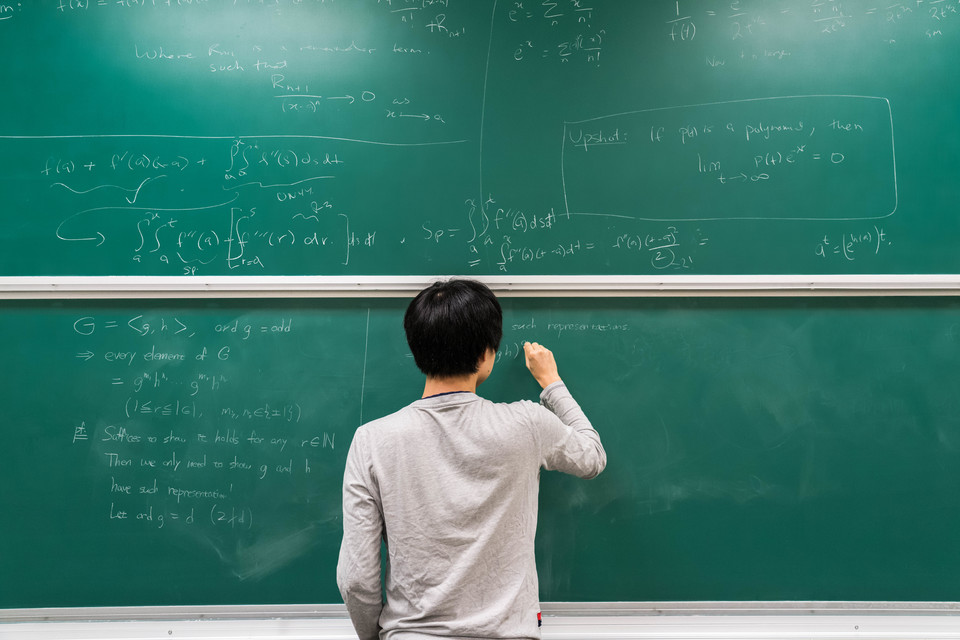 On 8 p.m. on a Monday this October, students trickle into Mathematics 509. Professor Ovidiu Savin, the director of undergraduate studies for the math department, walks in, and the room goes silent. Savin is tall and thin and somewhat wry. Today, it seems like his job is mostly to lower expectations.

The students are here for a review session for the 80th Annual William Lowell Putnam Mathematical Competition, a nauseously hard, six-hour intercollegiate math test that will be held this year on Dec. 1. Everyone is welcome to sign up for the test if they “want to kill a Saturday for some math problems,” Savin says before he passes out a practice exam from 1990, which has 12 problems. “Just try to solve one,” he tells the group. “The best people on our team only get four or five.”

Any undergraduate can take Putnam, as the test is called, but only three will represent Columbia in the team scoring. This year, the team is composed of Quang Dao, Myeonhu Kim, and Matthew Lerner-Brecher, all juniors in Columbia College and veterans of high-level high school olympiad math.

But at Columbia, math competitions no longer dominate their lives. Like many high school math olympiad rockstars, the three have now left behind the showboating of competition math for the abstraction of research math. Their new goal isn’t a trophy; it’s a Ph.D. and entrance into the world of research mathematics, where there isn’t always a right answer. But all rockstars love a comeback tour, and every December, the three return for a day to their old stomping grounds. 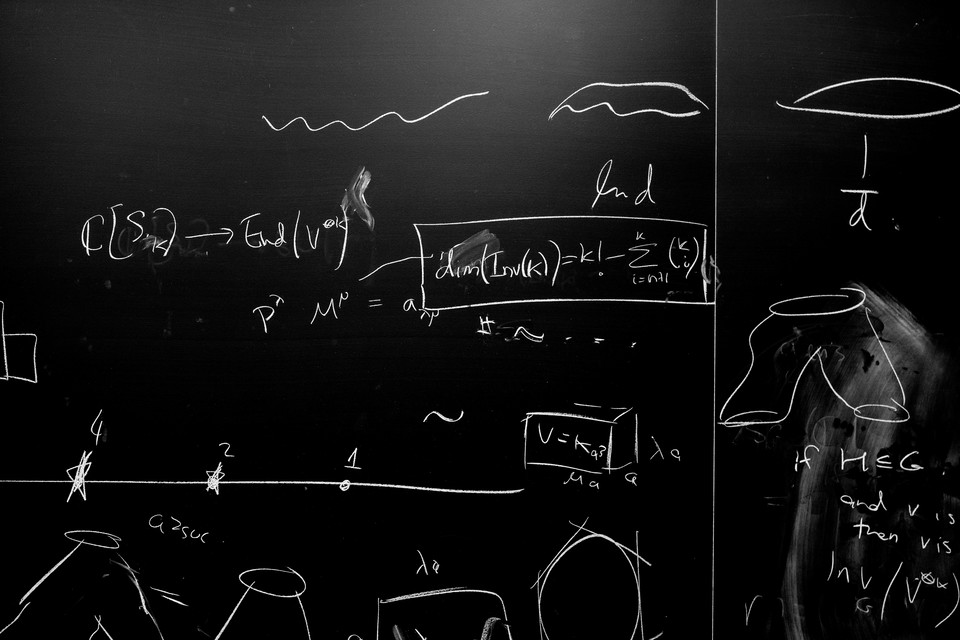 There are 15 people working on problems at the Putnam review session, of whom four are female. From the team, only Lerner-Brecher is present.

A thin layer of chalk dust has covered the tables, and a few students absentmindedly draw crop circles. Nobody has a phone out. Some students stare blankly at their papers. One woman leaves after the first problem. Another student writes so fast it looks like he is shading the page. Professor Savin considers his paper and lazily circles his temple with an index finger.

After a while, two students come to the board to present their work for the first problem, but Professor Savin is unimpressed with the rigour of their answers and starts to work out the general case. Someone calls out that the solution “looks suspiciously like a diffy Q.” Professor Savin admits as much.

Savin asks for a volunteer for the second problem, and Lerner-Brecher, who has dimples and a bowlish cut, shyly raises his hand to his ear. Professor Savin doesn’t notice, so he raises it higher in increments, like an elevator, until Savin finally does. Lerner-Brecher doesn’t bother taking his notes with him to the board. He is clear and articulate, but I get a little lost when he ventures outside of both the Latin and Greek alphabets. 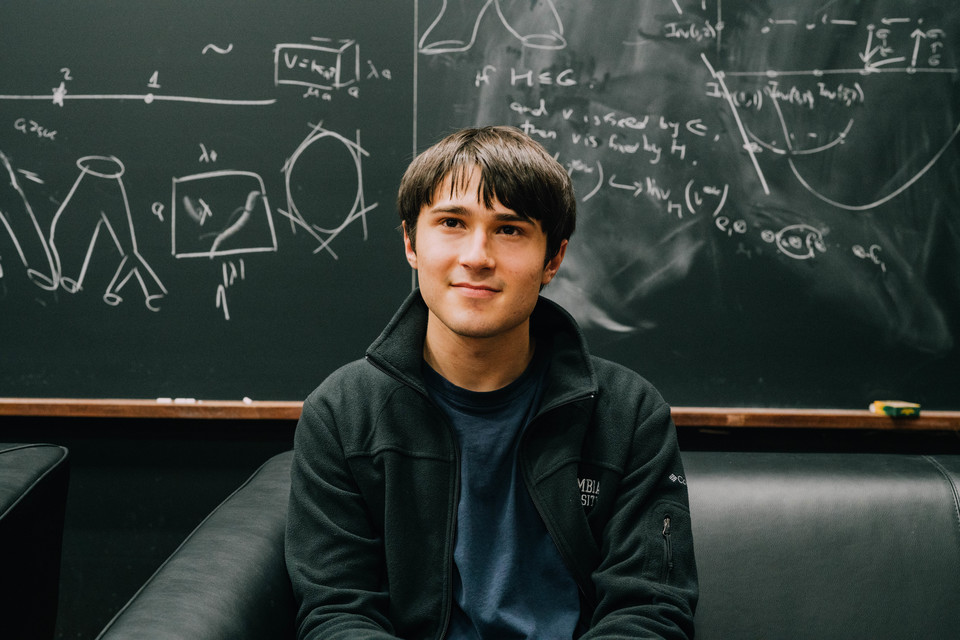 Putnam is the preeminent undergraduate math competition in the United States and Canada. Its winners have gone on to win Nobel Prizes and Fields Medals. (Richard Feynman was a Putnam Fellow in 1939.) The winning university takes home $25,000, and each of the top fifteen finishers makes at least $1,000, although Dao calls these cash prizes “irrelevant.” The test is also absurdly hard—of 120 possible points, the median score is sometimes as low as one.

Tasman Fell, a sophomore in Columbia College who took the test in his first year, describes the experience: “I remember sitting in the hole for six hours and not getting anything. It is a frustrating thing because you might get one question, and that’s it.”

But the team expects to do better. Both Dao and Kim were on the team last year, which rocketed Columbia to an honorable mention—its best finish since at least 1994. Columbia hasn’t been a top five Putnam school since 1957, but the team is cautiously optimistic. “I think we could be top five,” Dao tells me. “If we all have very good days,” Lerner-Brecher adds. 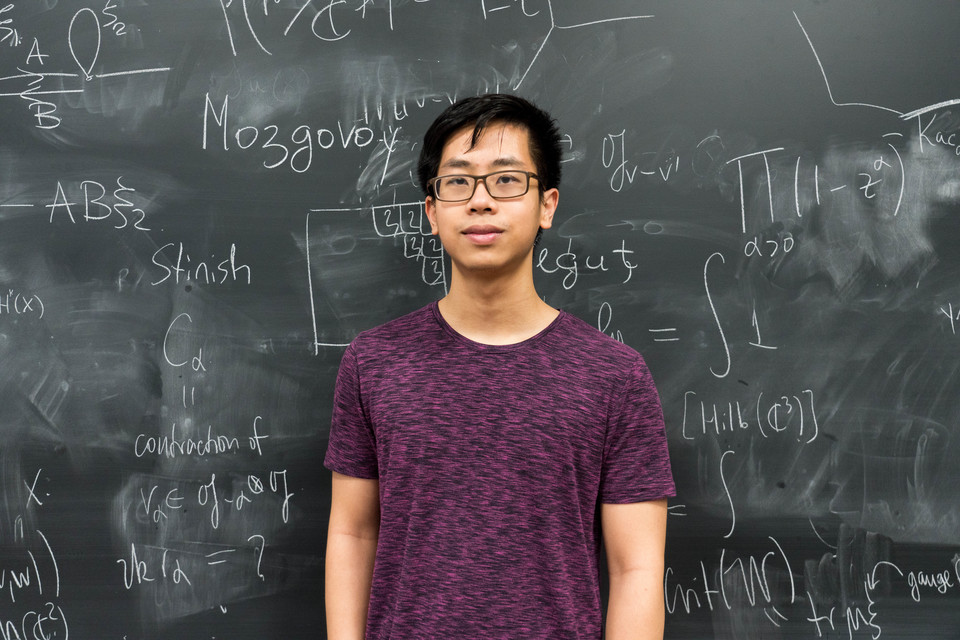 Quang Dao is a teaching assistant for Introduction to Modern Algebra I—he holds his office hours in the Math Help Room on Friday afternoons, the same day that I have a math problem set due. I often see him there, bent over someone else’s homework and nodding in an understanding way.

When Dao was a senior in high school, he was one of the six best high school mathematicians in Vietnam. He qualified for the Vietnamese team to the 2016 International Mathematical Olympiad, held in Hong Kong. The training was intense, especially closer to the date: six hours of team practice every day, and additional practice problems on his own. Dao, who seems like he would be calm even in a crisis, speaks in a soft, thoughtful voice. “I never quite put in a 40-hour work week,” he tells me. “But I just really wanted to get a gold medal.” (At the IMO, gold medals are given to everyone above a certain point threshold, not just to the first place performer.)

In the end, he got a silver medal, falling just two points short of the number of points required for a gold. He was disheartened and, for a while, thought he would no longer be able to succeed as a mathematician. In his first two years at Columbia, he shifted his focus to computer science. Eventually, though, he came back to math. 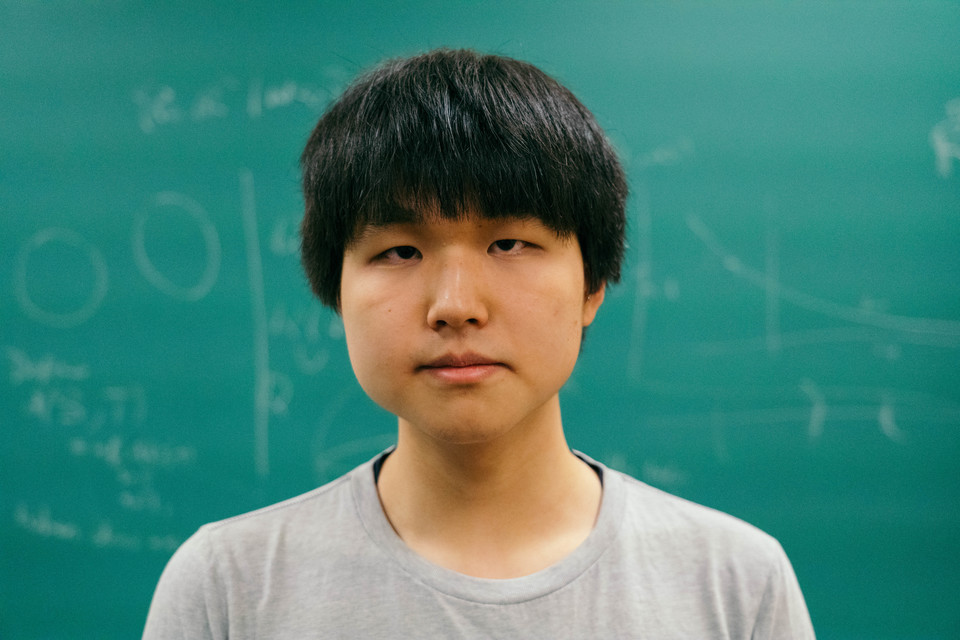 Like Dao, Kim competed at the international level in math competitions. Kim, who has straight black bangs that hang over his eyebrows and a somewhat intense energy, took part in the 2014 Asia Pacific Mathematical Olympiad as part of the winning Korean team. That same year, he placed 13th in Korea’s IMO team selection, narrowly missing a spot.

“I just have a natural ability,” he says, and somehow it doesn’t sound cocky at all. “I excel in my math study faster than other kids at my same age.” Dao tells me that Kim always solves a Putnam problem faster than he does. “I don’t really know why,” Dao says. “I guess he is just really smart.”

Lerner-Brecher, the third member of the team, grew up in New York City and went to Stuyvesant High School, which has a math and science focus. He was co-captain of the New York City Math Team, and, in his senior year, earned a bid for the prestigious United States of America Mathematical Olympiad. Competing in contests in high school was “really, really big” for him. “I’m a nerd. I enjoy doing them,” he says, laughing.

Kim claims that he has “retired” from competition math. In fact, all three team members say they will not prepare seriously for Putnam. Lerner-Brecher has a weekly problem set due the night before the review sessions, so he won’t be able to attend many more. For all three, the question seems to be “Why not?” rather than “Why?”

“If there is a chance I could make use of those years of training, then I guess I’ll just take it,” Kim tell me. “Maybe I could drop one or two of the classes I am taking and devote serious time looking over Putnam. But I don’t think it’s worth it. I plan to be a math researcher.”

Professor Savin, whose research at Columbia specializes in partial differential equations, was himself a decorated youth math competitor with a perfect score (and a gold medal) for the Romanian team at the International Mathematical Olympiad in 1995 and a Putnam win in 1997. “At some point, people are not so interested in this quick math,” he tells me. “Even in Putnam, most people do better their freshman year.”

Professor Savin himself seems to have lost some interest in competition math. When I ask him how he became Putnam Coordinator, he sighs. “Unfortunately, the job fell on me. And I don’t know to whom to pass it.”

For both Kim and Dao, the goal is a doctorate in math and, eventually, a career as a math researcher. This summer, they both worked in math research at Columbia, and this semester, they are taking only math classes, including three each at the graduate level. “I am studying math, like, pretty much all the time,” Dao says. Lerner-Brecher will “probably” get a doctorate in math, but he is less deadset on the course than his teammates, and his coursework, by comparison, is a more balanced diet: two math, two computer science, and one core class.

A Ph.D. in mathematics has held a romance for me, long after it became clear that I was not personally cut out for it. Part of the appeal is the almost Platonic search for universal first principles. Part of it is the nobility of choosing to dedicate yourself to expanding the world’s understanding when your skills could also land you a lucrative job in quant finance.

Pure research mathematics is often useless, a love song to math for math’s sake. “The mathematician G.H. Hardy took pride in how useless math is,” Kim says. “Now number theory is used in cryptography. Hardy would be disappointed.”

Just as juggling a soccer ball can improve a player’s control, competition math can fine-tune certain skills that do become useful in research, such as pattern recognition and problem solving. Nguyen Dung, who was on Columbia’s Putnam team last year and is now a Ph.D. candidate in math at Columbia, suggests that competition math is to research math as Latin is to the other romance languages. “It definitely helps,” he tells me. “But doing Putnam is neither necessary nor sufficient to do well in research math.”

Research math is also more of an art form than many civilians who quit after calculus may realize. Micah Gay, a junior in Columbia College who does mathematical research with professor Gus Schrader, tells me, “In actual research, it’s not like this is the right answer; that is the wrong answer. You are not graded on a scale.” Some of the great unsolved questions in math at the moment sound deceptively simple but require unimaginable creativity. Goldbach’s conjecture, possibly the most famous unsolved math question, simply asks: Can every even integer greater than two be expressed as the sum of two prime numbers?

For a long time, when Kim pictured the work of a mathematician, he could only picture a shut door marked “math.” Then he took a class in abstract algebra his first year at Columbia, and the door opened. “I had seen earlier that math was beautiful,” Kim says. “But I really began to appreciate it after Modern Algebra 1.” He is now a teaching assistant for Introduction to Modern Algebra II. Dao reflects on his return to math after his computer science sabbatical. “I guess I’ve been interested in different things at different times,” he tells me. “I just never cared as much about them as math.”

Perhaps it’s to be expected that brilliant and ambitious students lose interest in the more gimmicky competition math as they age. The Brazilian soccer legend Ronaldinho was a child prodigy in the trick-heavy, five-a-side version of soccer called futsal, but he eventually graduated to the World Cup. For the veterans of competition math representing Columbia this year, Putnam is a little like an international friendly, a chance to stretch their legs where it doesn’t matter so much.

Have fun leafing through our seventh issue!