Growing Together: The Student Effort to Change Barnard’s Neuroscience Program

Growing Together: The Student Effort to Change Barnard’s Neuroscience Program 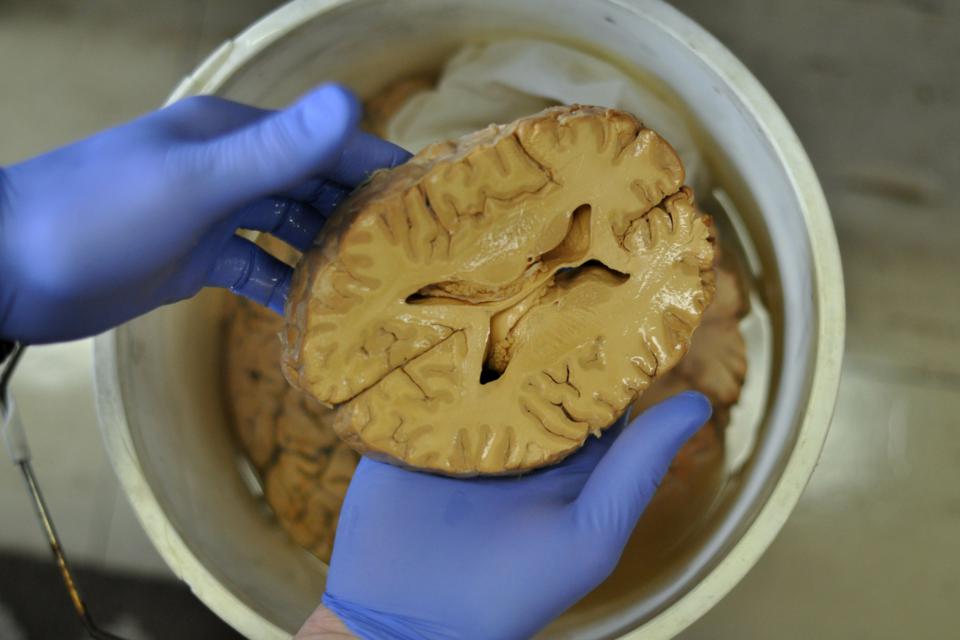 The neuroscience and behavior program at Barnard is no stranger to criticism. In the spring of 2017, graduating seniors from the program collaborated on a student-initiated survey about the major. The survey was thorough, asking graduating majors about their satisfaction with classes, faculty, advising, research, and community. About half of the seniors, over thirty students, responded. The quantitative responses to questions were ranked on a scale, one to five, where one and five alternated as the strongest response. The results of the survey were then analyzed and presented to the program’s director, Peter Balsam, a professor of psychology.

“It’s completely student-initiated,” Balsam says. “I think it arose a little bit from some of the things they were dissatisfied with, and they were feeling like the program didn't really have enough resources to do things properly. And the results of the study were pretty interesting.”

The concerns in the survey, a summary of which The Eye has obtained from Balsam closely mirror the testimonies of the professors and students I’ve spoken to. Many of these concerns stem from the program’s structure. Students want more faculty. Where a response of 1 was ‘very strong’, students surveyed responded with a 1.56 on average to “I believe the neuroscience major should hire more faculty members.” Balsam agrees that there is an urgent need for more faculty members; but as a program, it presently has no direct hiring power. Students want more electives, but are limited by a finite number of professors.

Community was another topic on the minds of neuroscience majors. “How well do you feel like you know other Barnard neuroscience majors?” asked the survey. Where a 5 was “very,” the average score was a 3.23. Some students wanted a stronger community, but the structure of the major hinders that. Surveyed students felt most strongly about making the major into a department. In response to the question, “How strongly do you feel about the following statements: I believe the neuroscience major should become a department,” where 1 was “very,” the average response was a 1.26. 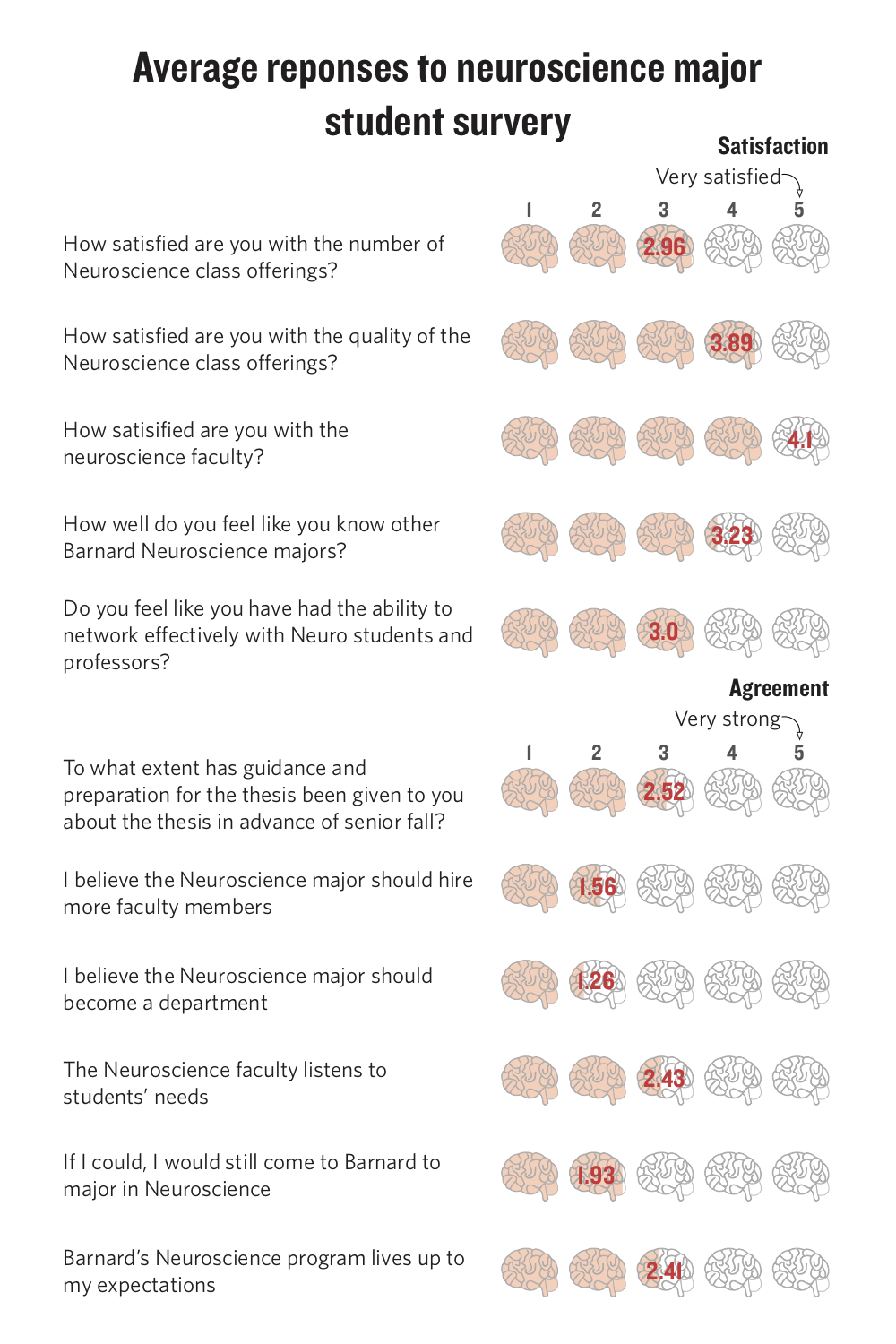 Even after the survey, students studying neuroscience at Barnard are taking an active role in shaping their major. This year, Kania Nemo, a junior neuroscience major, brought her concerns about mentorship and community to Balsam over the summer.

A community of majors, an increased number of faculty, more electives, and a department to get them there. These are some of the hopes of the Barnard neuroscience program. And students are willing to work with the program to get there.

“I would love to see this program grow,” Nemo says, “Honestly it's a great program, but I feel like there's a lot of room for improvement.”

The neuroscience and behavior program at Barnard was originally a major in biopsychology, beginning in the 80s. Early on, John Glendinning, a professor of Biology and a part of the neuroscience program’s core faculty, estimates that biopsychology only had around eight students, but around the end of the Decade of the Brain, which marked an explosion of research into neuroscience and that saw hallmark discoveries about neurological plasticity, drug treatments for brains disorders, and genetic underpinnings for neurological disease, excitement over these discoveries swelled the program and induced a name change: In 2004, Barnard’s neuroscience and behavior major was born.

The neuroscience and behavior major is a program, not a department, and is instead run jointly by the biology and psychology departments at Barnard. Both semesters of introductory biology, one semester of general chemistry, and one semester of psychology can dominate the makeup of students’ first years at college. Within the major itself, students have a choice between cellular and behavioral neuroscience concentrations. Barnard’s model is not uncommon amongst its liberal arts college peers: Williams, Wellesley, and Middlebury all have neuroscience programs, but not departments.

Still, many top liberal arts colleges, including Amherst and Pomona, do run neuroscience departments. And while the field of neuroscience does exist at the nexus of biology and psychology, the program’s placement between two departments can impact curriculum and hiring.

Two courses make this impact evident—The Psychology of Learning and Systems and Behavioral Neuroscience are psychology courses taken by many Barnard students. According to Balsam, about a third of the students in the Psychology of Learning are neuroscience majors, a third are psychology majors and a third are just students completing their science requirement. This creates a course with “very, very different backgrounds.”

With these many backgrounds, professors must teach to the middle, Glendinning explains. “The background they bring to the class is very different. And so that … makes it difficult to really cover advanced topics.” In making the class accessible to all students, some of the depth may be lost.

But in order to create two versions of a course, you need professors able to teach it. There are five professors who comprise the program’s “core faculty,” two from the biology department, three from the psychology department. Besides these, there are four other “advising faculty.”

This small core faculty is already given much responsibility, with schedules occupied by advising and teaching. The four advising faculty are psychology and biology professors who help with advising students, a balm for the small department.

With a small faculty covering the core neuroscience courses, there’s not much room to teach electives.

“I wish there were more electives available at Barnard every semester,” says Samantha Shih, a junior majoring in neuroscience and behavior with a cellular concentration. Balsam has heard this wish, too.

“We need to offer more, particularly electives. We just haven't been able to do it except occasionally with an adjunct because, again, there are no faculty for the number of majors,” he says.

Adjuncts could fill the teaching gap. But, Glendinning says, Barnard is trying to reduce the overall number of adjuncts and increase full-time faculty. He believes that hiring full-time faculty is better pedagogically, giving students the opportunity to develop relationships with faculty and work in their laboratories. Crucially, though, the neuroscience program cannot hire these faculty directly. Incoming professors are sought by psychology and biology.

“Do you have any control over that process or—” I ask Balsam.

If the interests of the biology or psychology department align with the needs of neuroscience, the program can expand. For instance, computational neuroscience is a rising field of study—Columbia is incorporating it into neuroscience graduate studies. While statistics is required for the Barnard major, experience with other computational tools like R or MATLAB is not. As parts of the field move toward simulation and programming, the curriculum has not shifted with them. Balsam would like to see a computational neuroscientist at Barnard, but he may not have the power to see that done. And Glendinning says that even when hires work out for the program, the pedagogical differences between, say, a trained psychologist and a trained neuroscientist may leave the program lacking.

Looking at the Psychology of Learning class again, Glendinning explains, “The psychology department may be more open to somebody who doesn't use neuroscience approaches … but if the neuroscience program ran [the hire], they could just get someone who looks much more mechanistically at how learning works.”

The neuroscience major requires careful planning, often from the start of a student’s freshman year. With the year of chemistry, year of biology, and a semester of psychology as prerequisites, there’s a level of commitment required before a student even steps foot in a neuroscience specific course. There’s no introductory course in neuroscience, though Balsam would like to see that come to fruition.

Glendinning sees the broad base as a benefit.

“If we give you this broad-based grounding in sciences and humanities ... then when you move on into a graduate program you know you're you're going to be much better able to kind of think in a broad way about a topic,” he says. Some of the depth in the program comes from student’s research. A year-long research requirement allows students to apply their learning in a targeted way. While not all students can do research at Barnard, New York City is home to some of the world’s best neuroscience research. Students can do research in many places, included, but not limited to Barnard, Columbia, Mt. Sinai, the Psychiatric Institute, and Rockefeller University.

The combinatory impact of the prerequisites and cross-major requirements can cause the curricula to be repetitive, admits Balsam.

The program is open to feedback. Balsam reached out to students at least twice last semester, in informal emails asking for feedback. Balsam is hopeful that President Sian Beilock’s emphasis on science will move both the program and the wider concerns of science to the top of fundraising priorities. Departmentalization could allow them greater control over their hiring and resources, especially given that program is now the second largest science major at Barnard, just behind psychology. 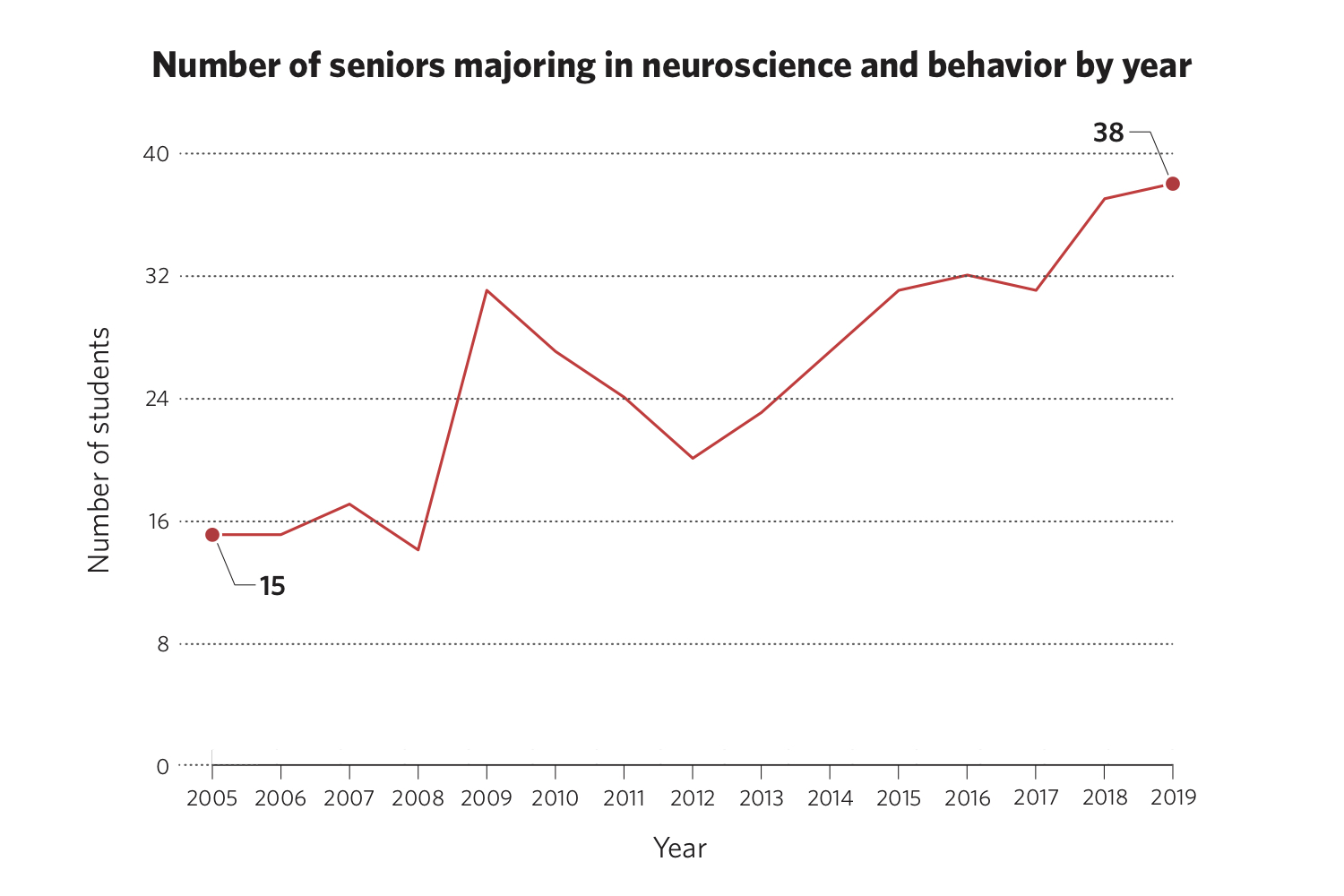 “I wish there was more of a community in the major,” admits Shih. Although she found friends and close professor connections in her larger science lectures, this was intentional. With no prescribed sequence in which electives and upper-level courses must be taken, the neuroscience majors have no convenient cohort to which they can belong.

In smaller science majors at Barnard, a natural community is formed. I’m a biochemistry major, and I know all of the chemistry and biochemistry majors in my year and most of the majors in the year above me. We take the same labs, the same lectures, and often work on the same research. There are no strangers.

Nemo attests that community can define a student’s experience in the major. While she was lucky enough to find an upperclassman mentor, she feels that without this sought out source of advice, she might have become lost. Taking from her own experience, Nemo spoke with Balsam over the summer, advocating for a mentorship program. He encouraged her to attend the upcoming Academic Program Review. She took to Facebook, posting an invitation to all neuroscience majors.

The Academic Program Review is a committee of external evaluators. The committee, comprised of faculty from Harvard, Wellesley, Wesleyan, and Brown, interviewed faculty and students on October 22nd and 23rd. Here was a chance for students to institutionalize their concerns again, much in the spirit of the survey. Nemo posted on Facebook, encouraging students to attend.

“Help us fix and improve Barnard’s neuroscience curriculum,” she wrote.

Nemo couldn’t attend all of the meeting, but Balsam confirmed the committee’s discussions. The results of its findings, concerning curriculum, hiring, departmentalization and more, will be summarized two weeks from the meeting in a report, according to Balsam.

“We’re able to get the word out that we need to improve this program,” Nemo says, “because unless we have people become more active in the process, unfortunately, things won’t change as much.”