Come take a schvitz with me

Come take a schvitz with me 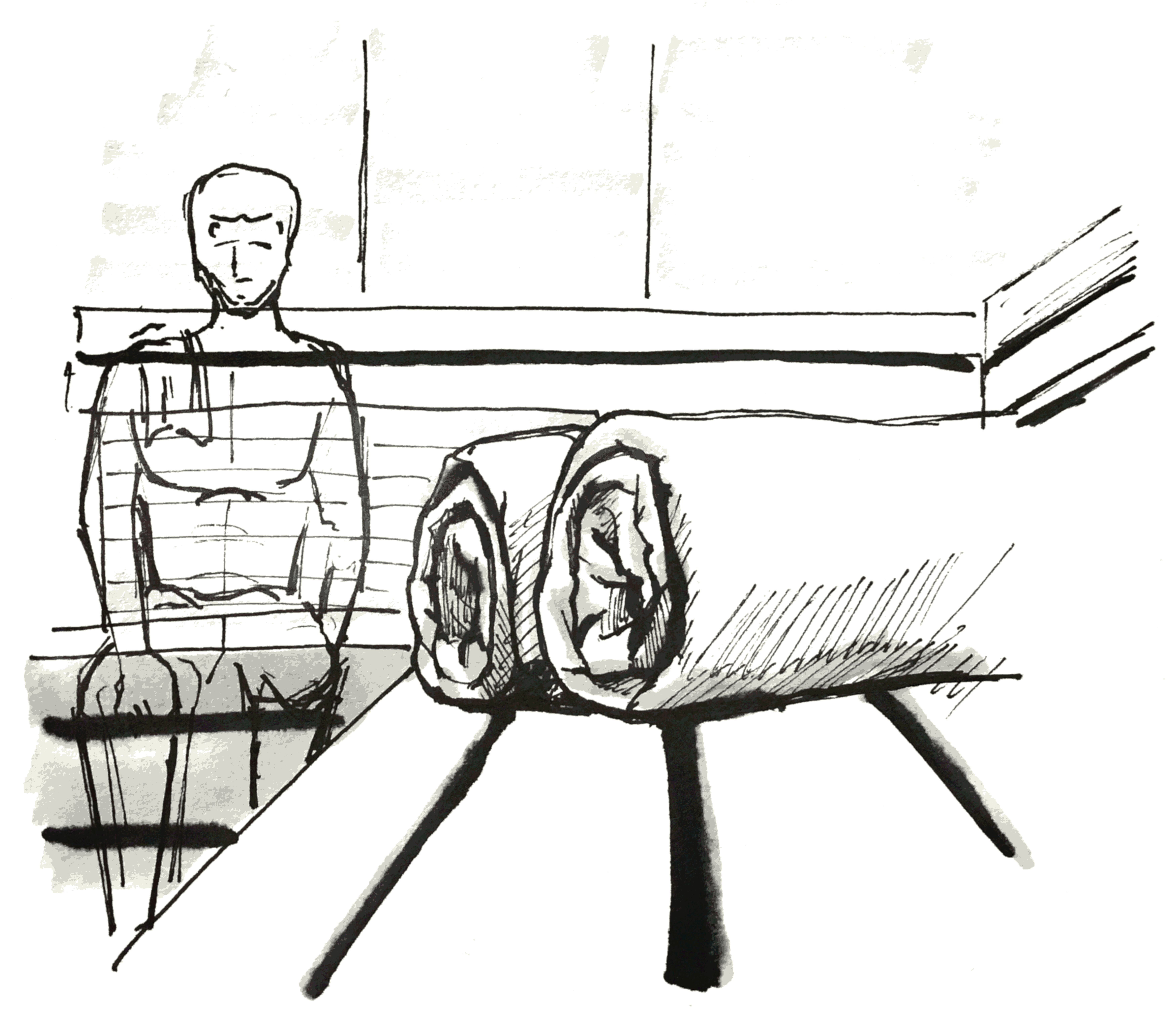 I first heard about the Dodge sauna in the second week of my first year, when a friend invited me for a late night sweat. We wore bathing suits, uncomfortable with the idea of being naked together. But as we sat there amid the heat, sweat, and bare flesh, I was quickly hooked.

It’s 9:20 p.m. on a Saturday night when I swipe into Dodge Fitness Center, carrying a tote bag that is empty except for a towel. I say a mental hello to the pictures of smiling athletes plastered along the entryway, look both ways before crossing the indoor track, and slip into the men’s locker room. There, past the full-length mirrors and advertisements for a Teacher’s College study—“LOOKING TO INCREASE MUSCLE SIZE?”—I turn right into a little corridor, undress, and complete my pilgrimage to the Dodge sauna.

By my second semester, I was going almost every day. Sometimes I went midday between classes, sometimes late at night to break up a long library stay, sometimes at 6:30 a.m. to sweat away the memory of an all-nighter. The sauna was my place to detox, think through assignments, and, sometimes, let tears merge with the river of sweat traveling down my face.

The Dodge sauna is a lot like a subway car—I never know what to expect. I’m as likely to find a wispy-haired emeritus professor reading the Wall Street Journal, as I am an angry-looking MBA student doing jumping jacks in his boxing shorts (only to be told by the emeritus professor to “Sit down” or “Leave!”). After that first night, I have never been with or seen anyone I know in the sauna. As strange as it sounds, this 100-square-foot hot box is one of the few places on campus which showcases the variety of the Columbia community. But in that sense, it’s also a reminder that even a large, vibrant community can nevertheless feel solitary.

I take a seat on my towel and start my schvitz. My heart begins to race. I can feel sweat beads forming on my forehead and upper lip. Even in a brief sauna visit, the average person emits a pint of sweat, while their heart pumps twice as much blood.

I take a few deep breaths and my nostrils burn as the dry heat greets them. I try to find inner silence, blocking out the hum of the electric heater and the loud grunts emanating from my fellow sauna-goers. The buff guy to my right is bright red and drenched in sweat, leaning far forward with his elbows on his knees. He’s holding his phone three inches from his face and has his earbuds in. Every once in a while, he mutters something to himself—first, “I’m just being me, just gotta be,” and then later, “Oh shit, oh shit. Oh my God.” I can’t tell if he’s uncomfortable or just pumping himself up. But sitting, stark naked, in this dark chamber, it doesn’t strike me as all too strange. The tacit rule here is “Don’t judge, and ye shall not be judged.” Or: Just try to pretend you’re not paying attention.

Meanwhile, the guy to my left—curly brown hair, hairy chest, foggy J.J. Abrams glasses—is doing elaborate Russian twists with his feet crisscrossed in the air, gyrating his torso from side to side like he’s dodging hoverboard traffic.

I close my eyes and think about the time my best friend asked me why I go to the sauna so often. I told him that the heat releases tension in the muscles and the psyche. I said, only half-sarcastically, that Columbia students—and all New Yorkers—are taught to work like machines, but sitting in the sauna helps restore my humanity. He nodded his head, and replied, “Why not just take a Valium?”

Why not just take a Valium? I’m not really sure. Covered in sweat and surrounded by older strangers, I do feel like I’m able to find greater peace and mental clarity. But over time, the sauna has seemed more like a wellness fad not far from Headspace and Yoga to the People.

And like meditation and yoga, the sauna is one of those fads which came from a rich ethnocultural tradition, only to be drained of all its cultural content once high-strung urbanites got a hold of it.

The sauna, like many things in New York, traveled here from Europe. It was the Finnish colonists who landed on the banks of the Delaware River in 1638 that built the first log cabins and saunas in America. In Finnish culture, the sauna tradition is not only about health and wellness, but is also a space that is woven into the fabric of family and community. (In Finland today, there are 5.3 million people and 3.3 million saunas). The Finnish enjoy the sauna with their relatives and close friends, preferring to be nude only around those nearest to their hearts. By the late 19th century, however, the Finnish were not the only community in New York who enjoyed a good sweat.

When my Eastern European ancestors landed in New York at the turn of the 20th century, they brought with them the schvitz—a multipurpose Yiddish word that acts both as a noun meaning "steam bath" and a verb meaning "to sweat." The schvitz was a place for the respectable men of the community—the schvitzers—to sit back and chat, but there were also the public schvitzes, which were the main sources of sanitation for those who lived in crowded tenements. Russian bath houses, too, became popular in areas such as Brighton Beach. They were a known hangout for mobsters, who benefited from being able to speak in private without fear of a hidden gun.

In all its varied forms, the sauna carried with it traditions of oasis, community, and insularity—places to be with your kind, and to escape an environment in which you’re the Other. But by the mid-20th century, saunas were nearly extinct in New York and across the United States. Yet, over the past few decades, they have experienced a resurgence.

Today, saunas appear in gyms and sports clubs, spaces for spandex-clad yuppies rather than neighborhood mobsters or immigrant laborers. What the sauna offers to contemporary multiethnic culture is its variety of uses. The ways people use the Dodge sauna are as much a mishmash as the patrons themselves: from meditation to calisthenics to self-affirmation rituals (I once saw a guy do all three in a span of 15 minutes). Most of those uses, though, seem to revolve around work, exertion, and self-improvement—perhaps reflecting the nature of the civilization into which the sauna has acculturated. As it has with other ethnic traditions, New York has transformed the sauna to conform to its culture of nonstop work, and convinced us, the New Yorkers, that 15 minutes of something traditionally relaxing will make us relaxed people.

For a while, I bought into this. Naked and alone among strangers in a sweaty wooden box, I felt free, anonymous—those quintessentially New York states of mind. No one cares what I’m saying or eating or wearing (if anything) in this city. The sheer speed of life allows me to forget that this place has a history, or even that I do. Escaping to the sauna from Butler—with its litany of familiar faces—kind of felt like moving from my small New England town to New York all over again.

But though I pine for those sweaty pockets of respite, I eventually stopped going to the sauna every day. While it lasted a little longer, my courtship with it fizzled out the same way that my courtship with Headspace and Yoga to the People did. As much as I wanted to believe that I used the sauna the way the Finnish or the schvitzers intended it—as an oasis, an escape from a way of life—it quickly became the way of life, just another agenda item to fit into my work schedule. The sauna was mostly just a hot room for me to sit in and think about my to-do list, free of distractions, alone with the other sweat-drenched men worried about deadlines. In the end, I realized how exhausting it was to go back to the library after the sauna, when all I wanted to do was lay down.

My new self-improvement project is getting eight hours of sleep per night. But hey, finals season is around the corner, so we’ll see how that holds up.