My Adoption: A Self-Portrait

My Adoption: A Self-Portrait 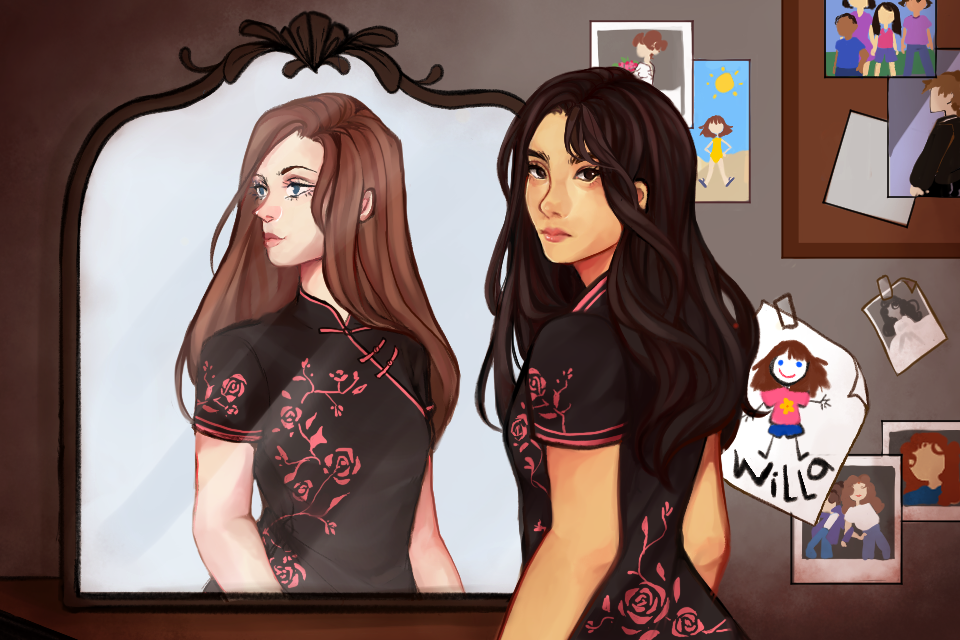 You aren’t able to tell from my name that I’m Chinese. The first part hints at my mom’s taste in literature, the last is a small act of feminism: two long American surnames that won’t fit on a hospital wristband. I do have a Chinese name, but I don’t use it. It came on my adoption documents, and it’s supposed to mean “bean sprout,” but Google Translate doesn’t agree. I type “Qimeng” into the translation engine, and it gets regurgitated in English as “to enlighten” or “to free from prejudice.” I like “bean sprout” more.

At my grandma’s house this Christmas, I find a box of old photo albums: polaroids of my grandma in her 20s on her wedding day, a flash of my mom in a yellow one-piece bathing suit, a younger version of my mom with a younger version of my dad, both with tighter skin and thicker hair. Mom is pretty. I recognize her slightly dimpled smile, the arch of her eyebrows, the turn of her shoulders, the high-waisted jeans. She’s beautiful in that retro, cherry red Coca-Cola way. She and her two sisters share the puffy 80s hair, the same lipsticked smile. I see my own face in none of theirs.

At my high school graduation, I receive a portfolio of all my best work from grade school—spelling tests, projects, collages. The folder is an opportunity to self-reflect, a way to grab time by its neck and stare it in the face.

At the bottom of the manila folder, I find a self-portrait from kindergarten I had forgotten about. For a moment, I wonder if there was a mistake, if they’ve somehow accidentally switched someone else’s for mine. My kindergarten class wasn’t particularly diverse, and it could have belonged to any number of my classmates. But my name is there, scrawled in enormous, uneven, childlike letters.

“It looks just like me,” I joke, showing it to my parents. We laugh. The girl in the portrait is wearing a pink shirt with a flower on it. She is white, her eyes are big and blue, and her head is too big for her body. Her hair is colored in with brown magic marker that I could tell had been running out of ink at the time I was drawing. She looks more like my friend Olivia than me.

A classmate next to me shows me her portrait, and we exchange paperwork, compare notes. The girl in her portrait looks no more like herself than the girl in mine looks like me. But at least she got the basics right–“electric green” for her hazel eyes, “brown” for the hair, “beige” for the skin. It’s close enough.

When I was little, I could watch animated films for hours. I wasn’t as interested in the plot as I was in the beauty of Alice’s nose, how thin and small it was, or how big and shiny Ariel’s eyes were. Even the anthropomorphized dogs were pretty, with eyelashes longer than mine. My parents watched serious movies, with serious people in them, and I watched those too, sandwiched between Mom and Dad and Josey on the brown leather couch in the living room, enamored with how pale and gaunt and sharp the actors’ faces were.

Throughout all of school, from kindergarten to graduation, I felt a persistent sense of ugliness. I didn’t just feel ugly in random bursts of insecurity, like when a boy in eighth grade rated me a “6 :)” on Facebook or when a friend said that I had a mustache. It was more of a vague, dull feeling that I seemed to sit in. I didn’t want anything of mine. I wanted pale skin. I wanted pencil-thin eyebrows and a nose so thin and bony you could prick your finger on it.

In elementary school, I became aware in a more real sense that these were things I did not and would never have. In fourth grade, a group of boys sitting at a table asked me why I didn’t look anything like my parents. They laughed, in the way only groups of boys laugh—the way that makes you feel stupid. I only wanted witty things to come out of my mouth when people messed with me. But my mind didn’t work that fast, and I ended up not saying anything.

In seventh grade pre-algebra class, a kid a couple desks ahead of mine told his friends that his parents used to tell him that he was adopted when he was misbehaving. They did it to scare him. They even pulled up pictures on Google and pointed out random people they claimed were his birth parents. The boy turned around in his desk.

“Aren’t you adopted, Willa?” He asked me the question as I hid under a curtain of hair, ignoring him, focusing on tracing and retracing equations on my paper.

This year, I’ve started to feel a protective obligation to myself that I didn’t used to have. In a seminar, someone asks the class if adopted children experience abandonment issues differently. In another, a student refers to a new maternity leave policy as “particularly interesting” because it makes a point of including adoptive parents. They’re harmless, targetless comments, but they make me bristle anyway; I remember times in the past where I’d sit silent, allowing discussions on adoption to take place in front of me, without me, unaware of me. This year, I realize with a quiet sense of pride that I’m uncomfortable with not saying anything.

At 21 years old, I don’t “feel” any more Chinese than when I was younger, but I’ve started to grasp what being Chinese in America might mean. I see flashes of it: A first-year confuses me for an exchange student; a construction worker yells “Ni Hao!” at me as I pass by; a Chinese taxi driver questions the origins of my name and asks me where I’m from. I watch The Social Network and Scott Pilgrim, and am vaguely disgusted by how easily Asian girlfriends become accessories.

When I walk through Chinatown, I feel like a girl walking down a street but not like a Chinese girl walking down a street. Sometimes I wonder if the feeling I’m searching for even exists. I wouldn’t call it a feeling of belonging, because I’ve always felt like I belonged with my family. I wonder if what I’m searching for could be called a common history, or a common culture, but I’m not even sure what that would feel like either.

At Pearl River Mart, I buy a ten-dollar qipao; it’s black and short-sleeved, and dotted with pale pink flowers. At home, I try it on in the mirror. Nothing happens.

Maybe, I think, the problem is that being adopted and being Chinese have always come hand in hand, and I can’t seem to separate them. I try to imagine how things might have been different had I been born into a Chinese family or if I’d been white and adopted into a white family.

I look at myself in the bathroom mirror and see what I’ve always seen: the full cheeks and cupid-bow lips, the slightly crooked teeth, the double eyelid. I make faces at myself. I used to think that I looked most pretty when I was angry.

I don’t know what my biological parents look like. I was never interested in learning, maybe because I thought I wasn’t supposed to care. But recently, I’ve become curious.

In the mirror, I reach out and touch the glass. Sketching a portrait is intimate, but it’s also, in a weird way, an exercise in detachment. I look in the mirror and try to analyze the work in front of me. The product of my biological parents is here. I have it, and I am it. I wonder, then, why it shouldn’t be easy, why I can’t unpiece my face back into its respective parts: the birth mother and birth father.

Somehow, I never feel this longing for family resemblance when I look into the faces of my mom and dad—three-dimensional and in the flesh. When we’re together, I can forget that we aren’t blood-related. It’s more the idea of it, the picture of it, the old photo from the 60s, that provoke in me some kind of longing.

I fish my self-portrait out from the bottom of my drawer under my bed, where it now lives along with all the other old stuff of mine. I can feel myself fluttering inside the messy coloring, the dreaming child, the frenetic heartbeat of a hummingbird. The paper is so thin and fragile.

The portrait isn’t a bad drawing, for a five-year-old. Or at least it’s not a bad drawing of someone else. I have always been good at sketching people, and I’m usually accurate.

It’s a small way to get to know somebody, to sketch the cheekbone, the tendons on the neck, the lip shape, to get familiar with every crease, wrinkle, and shadow. It is intimate. But drawing myself, even now, just like understanding myself, has always been a fraught process.

My mom and I don’t physically resemble each other, but we do share the ability to read people well. I used to lie on the living room couch at home, curled under my mother’s arm. People put so much weight on biological relationships, she would tell me, as she’d card her fingers through my hair. It doesn’t matter. We’re a family.

When I was a baby, my mom was afraid the nail clipper would hurt my fingernails, so she used her teeth to gently trim them. In bed, I’d put on the fake stethoscope she bought me for Halloween and check her heart. She checked mine, too, after bad days in middle school and high school, or much more recently, at the beginning of the summer, rubbing my back as I was curled in a fetal position after a horrible heartbreak. My mom recounts to me a story of Grandma throwing her shoes, refusing to wear underwear around the house, putting ice in her red wine. She laughs too loudly, something she has in common with Mom and me. I wonder if these are things that get passed down, if these are the things that matter.

An old friend of my mom once told her that he thought I looked like her. I had her face. He said we make the same expressions, share the same crow’s feet near the corners of our eyes when we smile, and look especially similar when we’re thinking deeply. When I look at myself in the mirror, I don’t see it. But maybe it’s the kind of thing that you can only see if you aren’t you.