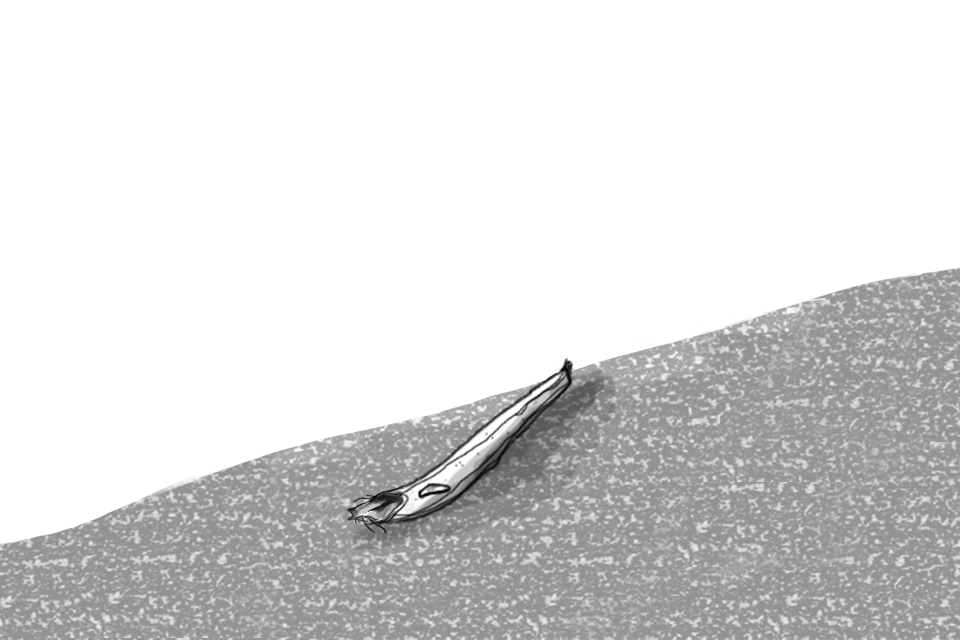 Whatever the conversation had been, the bird interrupted it.

When the bird appeared, we had been talking about something distinctly human. Our dorms, maybe, or the farmers market, or composting techniques—our elegant routines and their arbitrary minutiae. October had met our Sunday picnic plans with the first breath-fogs-up day of the season, but nevertheless, four Eye staffers descended 116th Street, laden with pies and tea, towards that familiar branch-and-twig jigsaw of Riverside Park. The leaves were uneven, half-dropped. I’ve been brought up on picture books advertising the East Coast autumn as one fantastic foliar cascade, and this climate-warped version is a little underwhelming.

Without warning, an enormous creature rips itself free from the treeline of Riverside and glides towards us, swooping up 116th. Its wings and claws coalesce into one immense mass, flying close to the ground, lower than the line of candy-teal rooftops of Morningside Heights. There’s a moment while it soars, entirely too big for something airborne, where none of us is sure that the others are seeing it. Then the bird—hawk? falcon? divine portent, bowed momentarily towards the earth? birders, help me out—drops something long and serpentine; that something floats, wiggling, toward the asphalt in the middle of the intersection, a sacrifice to the god of traffic flow. (This all sounds now like a fever dream that Freud would have enjoyed more than I’d want him to.)

The something became a headless eel, as if this was the Iliad, and we were the Trojans, receiving an omen from Zeus, who’d chosen Riverside Park to be our battleground. By the time we had rushed over to the eel, the flying creature had already made a smooth left turn onto Claremont, leaving us alone with its offering.

There is something jarring about encountering an immutably wild being in New York, like déjà vu, or the moment of vertigo just as you stumble on the stairs. A sharp warp in the Manhattan grid, a claw-punctured hole. An eel with its head torn off.

A friend from college visited me at home this August, and we spent much of the week together driving the hour and a half up from my hometown to San Francisco. There’s a lot on the peninsula in between that I don’t miss: ludicrously ostentatious suburbs, venture capitalists, a sometimes senseless charge towards a self-righteous techie future.

But you must also drive through valleys lined with evergreens that glimmer brilliantly in the summer and glide by in the fog in the winter, silent and stately. Past dead grass and more dead grass, much of which will revive itself in wintertime when the rain comes, on hillsides dotted with coast live oaks, craggy, stout trees, built to weather things. I wouldn’t try to convince you that the oaks are beautiful—they’re gnarly, dull brown, and branch out sideways instead of shooting upwards—but a picture of one is my phone background. It is comforting and lovely to me, and strange to others, and therefore precious.

“I think I’m starting to see what you see in this,” my friend says, finally. It only took four days of bumper-to-bumper next to these dead-dry fields.

In my wholly unscientific opinion, squirrels and pigeons exist in the city in a way that is enmeshed with the human space, an impressive level of ecological adaptation. I wouldn’t call them nature. The bird/demigod might be equally affected by the urban landscape in some ways—its life fundamentally altered by the fact that the wind patterns are different when it flies down the street between the buildings—but it doesn’t fit into the city so neatly. It’s too big and capable of too much danger; it feels absurd to watch it follow the flow of traffic.

While my hometown at the southern end of the Bay Area is as flat and endless as Californian suburbia must be, it and the rest of the Bay nonetheless feel as if nature has permitted them to exist, not the other way around. As if the land is what is real, and we’re all scurrying around in between it. The weirdest part of going home after being in New York is seeing the mountains, always on the horizon: blue and ghostly, thumbprints on the edge of your field of vision, like nature wants to let you know it still has a grip on all of this.

There is also a flip side to their presence. When you get up into those foothills, you can look out over the whole bay, up the peninsula into San Francisco, even over towards Oakland and Berkeley on the clearest days. You realize eventually that you’re looking at, in addition to that spread of city and suburb, nearly every person you know and love, each one of them situated somewhere in that shimmering mess, nestled between all those mountains. Caught up, at that moment, in their own elegant routines, with their arbitrary minutiae.

The raptor doesn’t know it, of course, but as it circles, above the foothills or above Riverside, it sees them all, too.