Caught in the Crossfire

Caught in the Crossfire 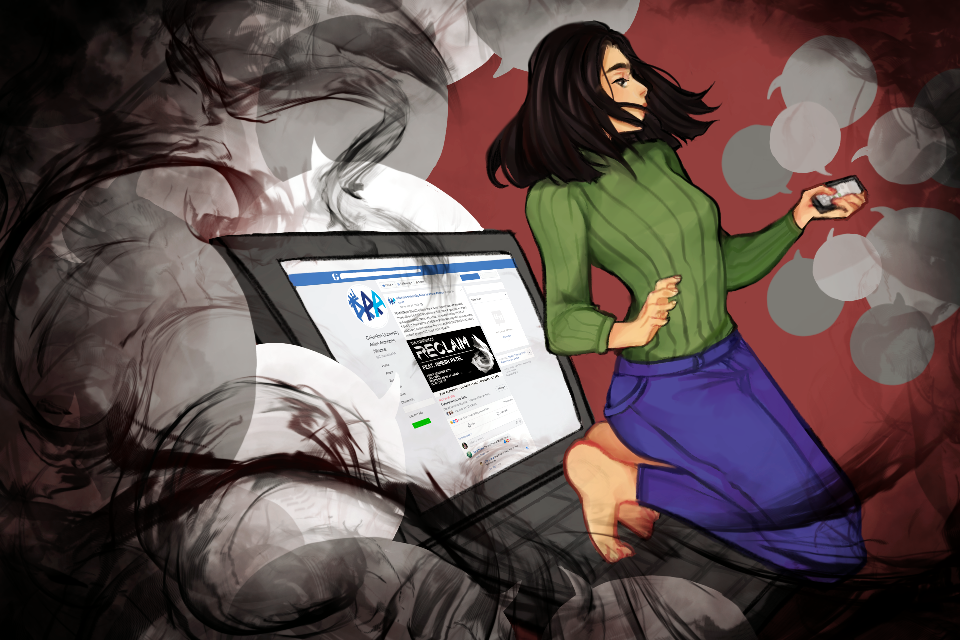 In my shafted dorm room, the mornings are dark.

“So eating dogs is ok, but free speech isn’t? Communist chinks. You liberal cunts are the cancer of society!”

I don’t stare at the message on my phone as much as I squint at it, the startlingly blue light of the screen so bright I read it with sleepy eyes half-shut. I want to rub my eyes awake, and I want to rub the message away with it—but I know these words will stay with me for a while.

I wish I hadn’t read the comment. I hadn’t meant to. But immediately checking your phone for notifications in the morning is a hard habit for any college student to break nowadays, and as I’ve learned, harder still when you know the comments are waiting for you. There is a sickness to it. Whether or not you read them, they will become whispers of vitriol that nip at your neck and eat away at you slowly. You might as well know how much you are hated.

It’s 8:15 a.m. and I’m going to be late to my 8:40 class, which, prior to last Friday, felt like a major concern. Now, with hundreds of internet trolls on my tail, waking up early has fallen significantly on my list of worries. But, as it always does, life goes on anyway.

I’m not sure where this story starts. Maybe it starts when I joined the Asian American Alliance as a first-year, or when I directed cultureSHOCK as a sophomore, or when I became president. It could start with the first time I was called a slur, or the many other times after that. Maybe it started far before these things, with the world as I was born into it, with the centuries-old traditions of systemic hate already ingrained in us.

One thing is clear: This story does not start when a comedian guest performer was asked to leave at cultureSHOCK 2018, a performance showcase that invites the marginalized to celebrate their identities alongside one another and for Asian Americans to share their stories. This story does not start with why the cultureSHOCK directors decided his set was not in line with the message of the event. You have probably already heard that story. You read it on the pages of Spectator, or the New York Times, or Breitbart.

I have told that story enough. I was not the one who decided to remove our guest from the stage, and I have no more authority to speak to that than those who have already spoken.

This story is about what happened after, starting a few hours after the event when the first article was published in Spectator. I didn’t know it then, but it was the moment my life began to unfurl. Every detail slightly off in that first article was distorted and magnified in every article that followed: the message of cultureSHOCK, which was vital to understanding the issue, was glossed over, and only one specific joke about a gay black man was mentioned, instead of the many jokes that ran antithetical to the event. Thus began a dangerous game of telephone, as fake news sites, tabloids, alt-right news sources, comedy news outlets, and a handful of more reputable papers reported the event.

There are many stories I could tell you about myself. Yet, the one story that was being told about me was one that I did not recognize—and it was all over the news. I had been a part of a beautiful event that our directors spent months perfecting, an event that made me and many others feel supported and celebrated. To me, the final act had just been a tough decision on the directors’ parts to stay true to their vision of the show. What I saw in the media was completely foreign to the story I remembered: “Columbia University Students Kick Former SNL Comedian Nimesh Patel Off Stage For Making Unsafe Jokes”; “‘Saturday Night Live’ writer yanked from Columbia U. stage for ‘offensive’ jokes”; and “Former SNL Writer Kicked Off Stage By Asian American Group After Gay Black Joke.”

I found my own voice lost in the abyss of articles. I had been falsified. I became deluged, stifled, giving explanations that felt filmy and weightless, and tasted metallic in my mouth. Me, the people I care about—we were made into contortionists, stuffed haphazardly into boxes and our story silenced. I could no longer discern which words were mine to tell. My club hosted an event about empowering voices, and in the midst of trying to maintain that, I lost mine.

This was when my life became a game, a three-part balancing act as a person, student, and center of media firestorm. The attention, the distortions that followed—all ballooned and ballooned out of proportion until they invaded my everyday world, and then made me smaller and smaller within it—squeezed me out into the marginalia of my own life. No matter how much I tried to live, to remember that I was above all a human being, I couldn’t outrun the media.

In class, I received a final paper assignment, glanced at my phone, and saw that the story made it to Breitbart. I tried to stay focused in Art Hum for more than 10 minutes and then ding, another notification: Mike Cernovich tweeted about it. I studied for final exams as reporter after reporter emailed to ask questions. The next Friday I went in to my internship, and there, my god, I see the comedian wrote an op-ed in the New York Times.

Hate mail poured into my inboxes, to our Facebook, to the club website. Even as I write this article months later, I open social media and see the simple message, “You suck!” As the messages pile up and I try to ignore them, Facebook sends more notifications: Respond to these messages for Columbia Asian American Alliance for a better response rate! A YouTube video of the event approaches a modest 300,000 views, with countless comments. Our official statement has upward of 800 comments and fluctuates still as comments are deleted, added, and reported.

Sometimes, the messages were so absurd they were laughable. Almost all of them were written by people who deeply misunderstood the situation, misled by a warped media perception. But more often than not, each message twisted at something within me, each bringing me a little closer to snapping.

Eventually I did. A week after cultureSHOCK, I was lying in bed studying for a final when I received the fifth or sixth message that day—my eyes only glanced at it for a second, but that was enough. I thought I had turned off my notifications on every platform, and still somehow, they found their way to me.

I closed my eyes. I focused on my breathing. I tapped my fingers, wanting quiet, wanting calm, wanting it all gone. But my hands shook, and I could feel my heart beat heavy, pulse, my tongue huge and suffocating along the back of my throat. I got up and paced. I didn’t get far before I tried to breath out, and a sob left me instead. My whole body shook so much I became just a dot of consciousness at its mercy, a quiver coming so deep from my stomach, my whole torso, that I was sure I was about to throw up. It had been so long since I cried so hard that I gasped. So long since I gaped, mouth open, suckling for air, a fish pulled out of water.

My roommate managed to calm me down. She, like many of my friends and professors, was able to ground me and offer me support in ways I could never have anticipated. Friends who made me remember I was valued more as a human than a controversial news issue; friends in AAA who stuck by one another; professors who offered comfort, advice, resources; club alumni who lent us their help, warm words, and a snack basket—these were the people who held me together. More than anything, they listened to me.

I told them when I felt like I couldn’t do it anymore. I told them how it felt like there were thousands of people who didn’t know me, and yet hated me. People who wanted me to die, or at the very least to hurt me. I told them about how more than anything, I had the gnawing desire to talk with each of these trolls, to just explain my story to them.

But responding to each person was out of the question. It was impossible; there were too many. Still, I kept thinking, If only I could just talk to them.

Here’s the thing. The first time someone called me a communist, I was 15 and had suggested, very generally, that we should strive for social equality. I did not know how to explain to my accuser that social equality did not equal communism, that communism was something my entire family had once run from.

The first time I was called a cunt I was 13. Some boys from my middle school left a voice mail on my home phone. They sang, “ching chong, ching chong.” They said they wanted to know what it would be like to fuck an Asian girl.

The first time a stranger told me to die I was 18, walking around alone in one of the nicest malls in Southern California, when a man stumbled right into my face and spat, “Die you fucking chink.”

The first time I was told the story of Pandora’s box as a child, I cried relentlessly, the way children do—loudly, swollen-eyed, milk-curdled-sour-faced. I couldn’t begin to understand why cruelty, unfairness, malice had to be released into the world, why there was any reason we should have to deal with all the senseless pain.

It’s true that I am young, that I am sensitive, that I have an aversion to the mean and unjust parts of life. And in some ways, the assumptions made by the media weren’t entirely wrong: I have many of the privileges often associated with the “elite liberal college student.” But not even my privilege could completely shield me from knowing some of the ugliness of the world firsthand. And then stranger after stranger made sure I knew more still of it. If I am “too soft,” it’s because I have, perhaps foolishly, chosen to be soft in a world that I know is harsh. I know that the “real world” can be offensive, prejudiced, and violent—and I choose to resist that.