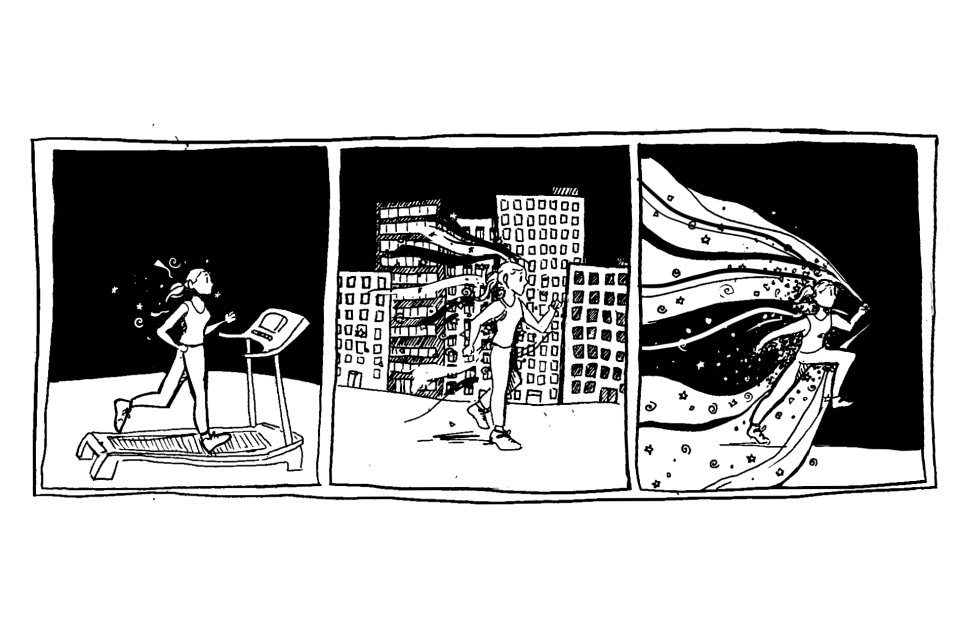 When I run down the stairs into Riverside Park, with some podcast blaring in my ears and sleep still shaking itself from my eyes, I’m concentrating on two things: 1) not falling onto my face, and 2) the way my feet feel upon the pavement. I am just running. I am running down the hill, to the flat stretch of pavement that will eventually bring me right out onto the Hudson. I’m not considering how this run will impact my day’s schedule or the work I should be doing instead. Nor am I thinking about the impending waterscape. Instead, I watch. I’m watching the woman in front of me literally lay down on the pavement to pet her dog’s stomach while he rolls around on the grass, or the father in front of me holding his daughter’s bike and then, all with one push, one, two, three … he lets go and she’s on her own, flying down the pathway for the very first time.

I have been running since I could walk, something that is obvious by the pair of size two Nike shoes hanging on my wall, which was gifted to me before I was even born (disclaimer: my feet were actually never small enough for them, but you get the point). I’ve run everything from a 2k race to a half marathon and all the miles in between. I’ve never been the fastest; I was usually the slowest, but I didn’t care. Running was always about the process for me, not the finish line.

In high school, I ran cross country for six years. It would be a lie to say I looked forward to it every single day, but I enjoyed the opportunity to take a break from the high school angst and anxiety over grades and step into the woods to run five miles or more with my teammates. We would run and laugh and hurt until we felt like we couldn’t run anymore. I’ve never been in more pain than during the endless hill workouts, when I would convince myself midway through that I couldn’t make it, and decide and that I might have to walk. The pain would rip through my lungs and legs until I was gasping for air, bent over at the waist, and on the verge of tears. I would stare only four feet ahead of me the whole time, because looking at the top of the hill was too discouraging, as I knew that I had to carry my body all the way from here, to there.

My dad always says running is like banging your head against a wall; it feels good to stop. And eventually, we would stop and limp back as a team to the locker room to laugh and complain, and then go home and scarf down as much pasta as possible.

Haruki Murakami, the author of What I Talk About When I Talk About Running, has written about how long-distance running is like life. Until this year, I never felt that way. Last year, as a freshman shedding all links to my tiny little hometown, I ran maybe twice all year—I didn’t see the point of it without a team running beside me. One day in a blaze of white hot excitement, I ran through Riverside, and to my surprise, I liked it. I enjoyed the feeling of running without a team, without a set goal, without the pressure of a race.

Turns out, I didn’t have to leave running entirely behind in the trails of Upstate New York. My location and the circumstances were different, but running was still the same. I still felt the same euphoric burst of achievement when my feet slowed down and stopped tumbling over one another. Running was still running. And I liked it. It didn’t matter that my view had shifted from tall pines to enormous high-rises.

Still, there are days when I can feel every inch of my body telling me to stop, the heaviness of my limbs dragging along the pavement. The hurt of cross country comes back and suddenly I’m running up Stinger, the biggest hill on my high school’s cross country course, instead of the baby hills of Riverside. Regardless of place, running is still running and running hurts. It hurts regardless if it’s two miles or 12. Cross country taught me, Riverside reminds me. But then, I finish. I stop running, and I leave the park, and the pain is over. I began the run focusing on the pain and ended the run letting it go.

Columbia, like running, often presents me with challenges that are painful, not in the same way, but painful nevertheless. Isolation, pressure, and overloaded work schedules hurt, and during the hardest times, I think that I need to stop, since the stress is too much. But just like running a hill, I take it step by step, only looking four feet ahead, not focusing on the total amount of work ahead of me. I keep working until it’s all done, then go home and laugh, and scarf down as much pasta as possible with my friends.

These morning runs in Riverside Park are some of the few moments of the day when I’m completely present in the moment. Columbia’s bubble doesn’t extend to Riverside Park, so when running, I am reminded of the world outside of campus; that small distance from Broadway to Riverside brings immeasurable comfort. Riverside Park is always there, waiting for me to forget the stress of Columbia for a few hours, with only a few shocks, like the time I saw two cars collide on the Henry Hudson Parkway, or a man sitting completely naked on a bench in the middle of the park at 10 a.m. Besides these rare instances, the only thing that changes about Riverside is the weather.

This point in life feels so fragile and volatile to me. Everything is changing constantly: my thoughts, my plans, my dreams. Then, after four short years we’re supposed to know what to do with our lives. Pulling on my sneakers and heading down the same path every day calms everything down. I jog slower past the dog park to watch them excitedly run circles around one another, take breaks on the benches by the water to bask in the new spring sun, and watch the tennis players go back and forth with the fierce coordination I can only ever dream of having. The consistency found when running in Riverside creates balance to a constantly changing college in a big city. Running was once a comforting presence for me in a time that felt so confusing and scary, and as I head into my twenties, running is a solace unlike anything else in a city that forces me to reframe pain, both physical and intangible challenges, every single day.