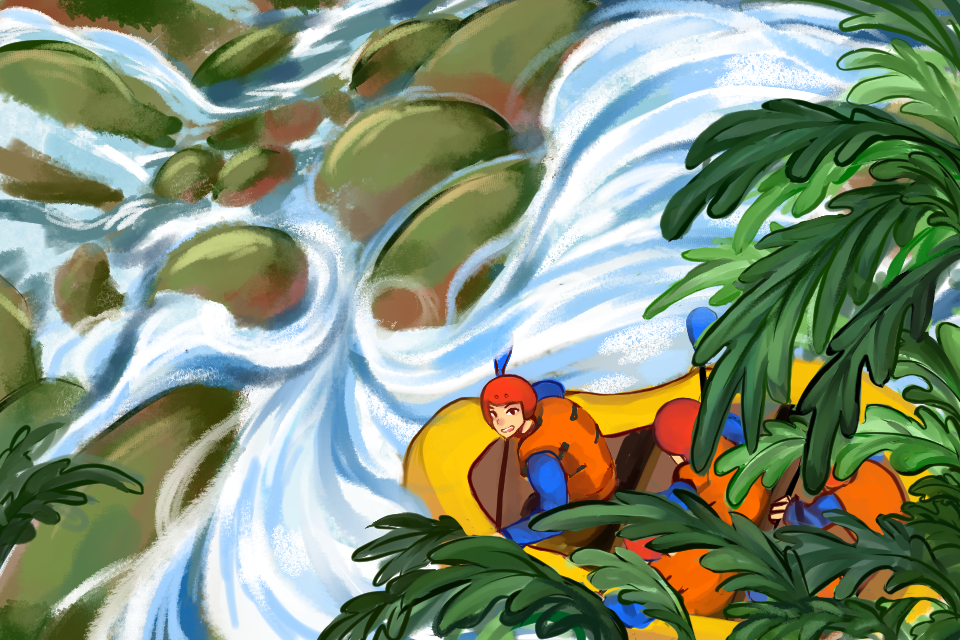 For the nearly three seconds that I sailed down the world’s tallest raftable waterfall––a 40-foot curtain of water gushing over and around my arms and legs, the guide shouting at us to cover our heads, nothing but a rock-strewn river below us––I had time to think. About that TLC song, of course, and how suddenly painful its wisdom was, but also about my strange new habit of extreme adventure sports. I’d greeted the day on a rickety mountain bike, careening down a sheer cliff face the width of a shopping cart, punctuated by boulders and the occasional aggressive ram. The next weekend, I would leap from a glorified gondola off one of the highest bungee platforms in the world, plunging 440 feet into a rocky canyon. My quest for adrenaline had led me here, to this waterfall. But it had also led me here, to southern New Zealand, the unofficial capital of adventure sports and about as remote of a relatively comfy place as you can find.

When I told the residents of Dunedin, New Zealand that I was visiting from New York City for a semester abroad, I received surprisingly uniform responses: First “…Why?” And then: “Is it like Friends?” Dunedin is about as far from Manhattan as you can get: separated by nearly 15,000 kilometers (or 9,256 miles, for those of us who prefer freedom coordinates), of vacant blue ocean dismissed by scientists as too hypoxic for life and without much going for it, unless you count colossal squid or Maui. Over eight million people live in New York City, 1.7 of them scrunched onto the 13-mile-long island of Manhattan alone. By contrast, 4.8 million people live in New Zealand. Most of them are Aucklanders, which has led to one of New Zealand’s most enduring epithets, one I could never be sure was a put-down or simply an honest reckoning: JAFA, or Just Another Fucking Aucklander, though even the JAFAs are far outnumbered by the 60 million sheep.

The rugged South Island, where I decided to go, stretches to 58,000 empty square miles, with just over a million people rattling around inside. Dunedin’s 127,000 citizens merit it the title of New Zealand’s seventh most populous city, and it seemed like most of them are united by three common pastimes: rugby, fish and chips, and the Scrumpy, an invidious hard cider that looks like soda, goes down like fruit juice, and comes back up like hellfire. Local solidarity is a survival strategy. New Zealand is underpopulated and remote, with its only neighbors, the hated Australians, a three-hour flight away. Amazon delivery is a pipe dream. Online dating is claustrophobic. A few solutions present themselves: Love thy neighbor, get ready to befriend some sheep, or head out into the lonely bush. I, the prototypically entitled American college student, had arrived expecting to Find Myself by doing the latter.

I didn’t leave New York because I don’t love New York. I love New York, in the awful, tiresome way where you can slowly see yourself morphing into That Person who talks about New York, unsolicited, at dinner parties. I embrace New York fullheartedly, trekking beyond the cloistered confines of the Tom’s-to-Pisticci’s student social stretch like a penitent on pilgrimage. I’ve walked from Washington Heights to Battery Park. I’ve picnicked and gone rowboating in Central Park. I’ve admired the to-scale miniature model of Manhattan while in Corona Park. I’ve patronized Prospect Park’s petting zoo, although a group of kindergartners kept monopolizing the alpaca. I’ve even spent over 20 minutes in Staten Island.

New York never slept, and neither did I, constantly energized by talks and movies and brunch spots and urban adventures. My identity had revolved around being a writer since middle school, but I was finding it harder and harder to start a story, my creativity drowned out by the city’s seductive racket. And New York’s glittering amazingness was a harder and harder salve to smooth over some internal questions, growing louder and more insistent as they’d tugged at my subconscious over the past year: Who was I? And, most importantly, was I capable of being the person I’ve always dreamed of becoming? As a college student, I felt like I was living on a fulcrum, a purgatorial moment between the child I was and the well-adjusted working writer I’d always wanted to be. Sure, I dutifully made plans and checked off boxes as a younger adolescent, but my conception of my identity was always an idealized impending certainty, a problem which future me would certainly have solved.

But next year I’ll graduate, and the personal metamorphosis I’d always anticipated––into some infinitely capable and competent version of myself, already on her first steps toward her first Pulitzer––hasn’t transpired. The stories I’ve been sending out to magazines since before freshman year have resulted in nothing more than hundreds of form-written rejections. The little writing I complete feels stagnant and forced, and I understand for the first time the longing glances my classmates cast at consulting firms, the suit-clad lines for investment banks at the career fair.

I attended the tree lighting ceremony last fall, feeling surrounded by students who seemed to have more inner clarity than I did––in their background, or future plans, virtue, knowledge, social tribe, lives lived in accordance with a deliberate code of ethical norms. As the holiday trees illuminated, and our slushy, midterm-weary campus temporarily rejuvenated with glittering light, all I could focus on was a vast sea of faces seemingly at ease with their own basic competence. In comparison, I felt totally lost, adrift in a sea of entertainments but unable to say what I could do or what I stood for. Impostor syndrome may be the name of the game in Morningside Heights, but it’s perniciously good at making you feel like you’re the only one suffering.

Still, why would I come to New Zealand? Even as I bought my plane tickets and signed my travel waiver, I wasn’t sure. The island’s sheer natural gorgeousness and promise of a place to think, alone and unplugged, was appealing. But I loved the city, my girlfriend, my friends. I’ve never been an outdoorsy person, and I get anxious about doing anything I might not succeed at. Overwhelmed by so many new academic challenges, I cried nonstop for the first three weeks of kindergarten. My comfort zone has never extended far past the pages of whatever novel I was reading.

After a few weeks on the island, I began to understand why I’d come. For me, studying abroad was a personal test, a crucible in which to forge someone capable of writing a successful novel or organizing an ethical life. I didn’t just want to discover some capable version of myself, there all along but hibernating in New York’s easy comfort. I wanted to create that self through the decisions I made and experiences I chose. I would defy depression’s deterministic whispers about my own mediocrity.

It would be hard, but I could leave the only place and the only person I’ve ever loved and spend half a year across the ocean. I could drive four twisty hours on the wrong side of the road, carry a 40-pound-sack up a 5,000-foot mountain only to haul it back down and drive home again. I could make new friends, leap from canyons, sleep on nothing but a half-inch foam core in a threadbare tent as a territorial sea lion bull bellowed outside. And I could do more prosaic things too, things for which others might laugh at my intense anxiety. I could figure out student health insurance. I could learn how to cook. I could buy a car. And maybe, if I could do all those things, I could write. Or maybe it wouldn’t matter if I could write. Because at least I could prove to myself that, as a human being, I was basically competent rather than dysfunctional and holding it all together by a poorly tied thread.

By now, I’ve fallen to the bottom of the waterfall. I don’t remember the moment of the raft’s impact; only the dark, foamy disorientation immediately after, the heaving water tossing me under and the taste of my bitten tongue in my mouth. The guide had warned us we might capsize. We have.

I remember some vague instruction about finding the air pockets beneath the raft, but all I can do is spin in roiling, ungraceful somersaults, flailing as rocks scrape up against my arms and neck. I’ve dropped my oar. Every time I try to rise for a breath, the hard rubber of the upturned raft blocks me. I’m not thinking. Instead, there’s a primal shout I’ve rarely heard from deep between my ears, communicating urgent flashes of meaning rather than over-intellectualized sentences: Get yourself together. Breathe.

I find my air bubble in the small, red-hued place beneath the overturned raft and pant. Across from me is a D.C. attorney, close-cropped hair soaked. An hour ago she was cracking jokes about Mueller, and now she’s looking at me and gasping, without recognition, fear still hot and black and inky in her eyes. It doesn’t matter that this is another mockable, fundamentally ungenuine experience, paid for by the hour. It existed; it was endured; it mattered. I reach out to her. “We did it,” she says. And I had.