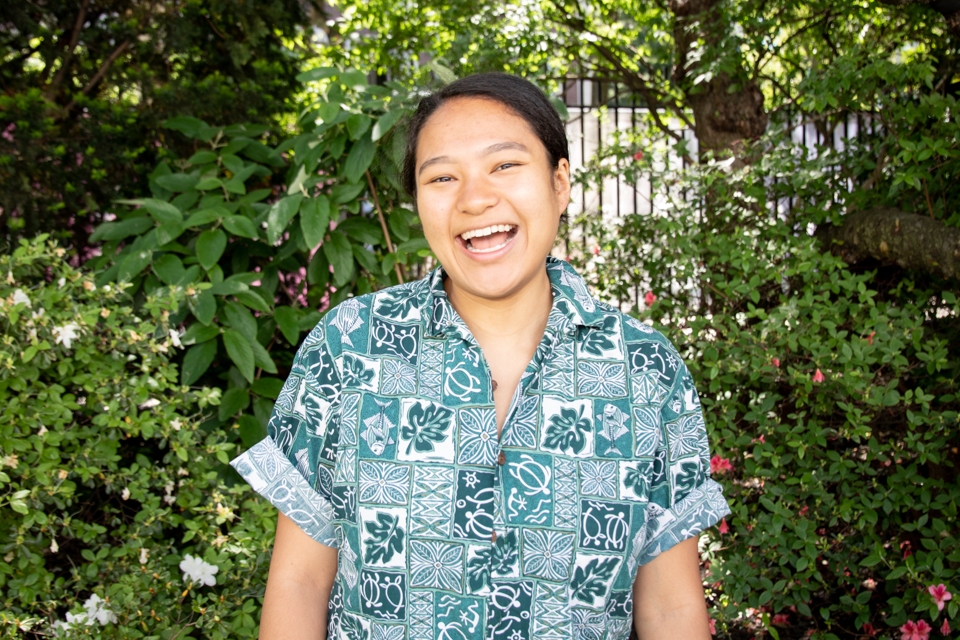 This summer, Alani Sumako Fujii will be growing her own food at home in Maryland. Her decision, she explains, stems from a belief in “self-sustenance,” a key trait she’ll need before she starts working for the Peace Corps. In just a few months’ time, Fujii will be in the Kingdom of Tonga, in the South Pacific, teaching English.

Fujii—an urban studies major with a concentration in political science and a minor in women, gender and sexuality studies—has always been interested in public service.

Youth development and empowerment, in particular, is an area where Fujii wants to make her mark. Fujii tells me of the after-school program for low-income students that aided her application to college; she hopes that one day, her work can help someone “also have the chance to dream of something bigger or question the world around them.”

Later in the interview, Fujii again meditates on her desire to do good. She’s pondering, and the silence takes up more minutes than anticipated. “It’s intuition, I don’t know, maybe it’s a past life,” she laughs.

It’s rather fitting, however, that before Fujii commits two years to serving in the Peace Corps and many more working in public service, she will be taking the summer for herself.

Among the most important lessons Fujii has learned at college is the need to prioritize her happiness and her health. While this seemingly contradicts her plans to work in the service of others—to “change people’s relationships with politics or even be in a position to make someone’s life easier”—Fujii knows that it’s necessary to take care of oneself before taking care of others.

For the past few years, Fujii was all these things at once: a participant of Blasian Narratives, an off-campus media project; a volunteer to teach students in Washington Heights; and a Muay Thai fighter. On a regular day, she traversed up and down the city to meet all her various appointments, before coming back to campus at 9:30 p.m. and starting on her schoolwork.

It’s exactly her many commitments off-campus that she deems as self-care; to Fujii, the Barnard/Columbia culture of competition is stifling. And though the city often plays a role in heightening the sense of loneliness on campus—“people don't have to invest in each other here,” she says—it has also been Fujii’s remedy for some peace of mind.

Muay Thai, a sport Fujii picked up in the eighth grade, gives her the time and space to focus on herself. She says, “I think it’s been the best teacher of mental and physical wellness I’ve ever had in my life.” Her gym at Columbus Circle brings together folks from all over, and Fujii appreciates the chance to befriend people from vastly different walks of life.

On campus, too, Fujii has found her loving and dynamic community. She excitedly points at the logo on her shirt—“Taiko!” Fujii tells me that while she’s never felt comfortable in affinity groups—she’s black, Asian, and sometimes feel like she isn’t enough of one or the other—Taiko has provided her a space to come into her identity.

Fujii often circles back to the people: It’s the students in Taiko, the people at the Muay Thai gym, her professors and friends that have defined her time at college more so than the institution itself.

After Fujii walks across the stage to receive her diploma, her immediate plan is to head to Panda Express with her friends—a place she loves with people whom she loves.