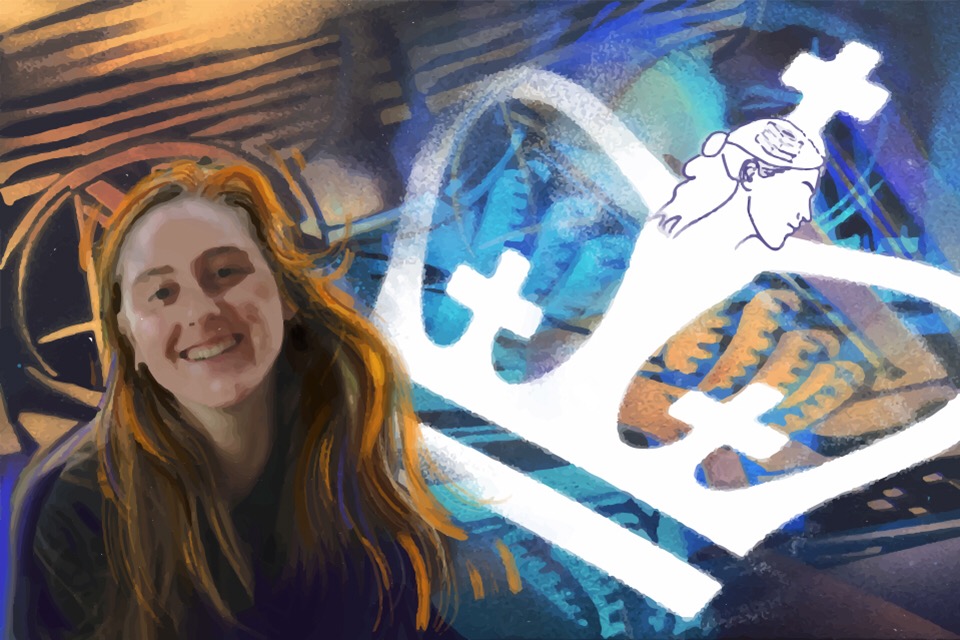 Sitting at a rickety white table in Joe with her white earbuds in and her red hair falling over her face as she pores over a neatly organized but well-used notebook, Silvie Schlein looks like any other Barnard student. But Silvie wouldn’t spend her day migrating through campus attending classes, racing to club meetings, and tackling piles of homework in Butler Library. Instead, after attending Introduction to African History in the Diana Center, Silvie leaves the boundaries of Morningside Heights and heads to her home downtown. There, she resumes her day-to-day as a homeschooled high school senior: studying for AP exams, taking online classes, and writing college applications.

As an auditor at Barnard, Silvie joins the members of the Upper West Side and the greater Manhattan community who are pursuing a more nontraditional path to learning by taking classes for no academic credit. Despite not being formally graded in the classroom, Silvie, like many auditors at the University, holds a “learning for the sake of learning” mentality,taking advantage of her proximity to the resources that Barnard has to offer and studying specific humanities subjects unique to the realm of college education.

And she’s experienced it all at less than a fraction of the cost. In fact, besides subway rides uptown and the cost of her textbooks, she paid nothing at all.

Silvie’s journey to a Barnard classroom began a little differently. Homeschooled since the third grade, she started auditing classes at Barnard in her junior year of high school. She first took Latin American history with Nara Milanich, and then African history with Abosede George.

Despite her young age, Silvie is well-acquainted with Columbia academics. In her early teenage years, she took a literature class taught by a student who had gone to Teacher’s College. The class was modeled similarly to a Barnard seminar, held twice a week with eight other girls, with homework primarily consisting of essays and readings.

“A lot of my [homeschooled] classes were like that, so it really prepared me for a college education, I think. Instead of going to school from whenever to whenever, do a sport, go home, go to sleep, get up, it was like having two or three classes a day and then a week to do your homework, which helped prepare me for this experience,” Silvie says.

After studying American and European history at home for her educational requirements, Silvie decided to dive deeper and explore something new. Through a mutual acquaintance, Silvie got in contact with Milanich and she asked if she could sit in on her seminar to learn about Latin American history. Milanich agreed, and she took it a step further and arranged to have some of Silvie’s work informally graded so she could engage better with the material.

“I think [this first class] was intimidating in that a lot of people had a lot more experience in the field,” Silvie says. “But it was more broad ideas, so you were able to participate in that way. So I could think about, for example, gender in a larger sense, and then I could talk about it.”

After the class ended, Silvie, encouraged by her experiences at the seminar, sought to further her Barnard education. Silvie knew she couldn’t continue being only Milanich’s student, so she forged forward, diving into Barnard’s course listings. Realizing a blooming curiosity for African history, she reached out again directly to George about the Introduction to African History course, requesting simply again to just sit in and learn. One of the teaching assistants for the class, Luz Colpa, offered her a chance to join a discussion section and again to have her assignments graded informally so that she can be thoroughly immersed in the course experience and engage with other students in the classroom.

“It was exciting; I thought it was going to be a big thing and I was so nervous to meet with all these college students and plan the midterm presentation,” Silvie says. “We met for 10 minutes and they said, ‘Alright everybody, you can just put your definition on the Google Doc and we’ll present in two days’ and I was like ‘Ok, wow!’ I thought it was going to be an hour long thing!”

Three other students joined Silvie in auditing Introduction to African History last semester. Though the School of Professional Studies’ Manhattanville Auditing Program and the Lifelong Learner’s Program, a program for members of the community who are 62 years or older, several specific classes in the auditing department can be taken at a discounted price for no academic credit with auditors joining as “silent participants.”

Although Columbia’s and Barnard’s auditing programs are typically targeted at older members of the Morningside Heights community, many of the offered classes for auditing are structured in a way that even those unfamiliar with Columbia can easily assimilate into the classroom environment.

“With auditors, this [course] is what they want to do,” Colpa says. “In that way, [Introduction to African History] is almost more for them than for the regular students. You can really spend hours; there’s enough material that you can spend thinking about this, talking about this, and asking questions.”

For Silvie, nontraditional learning environments have been a constant. After attending bilingual Spanish-English schools from preschool until second grade, Silvie switched to homeschooling, along with her younger sister, after her mother became disenchanted with her school’s educational practices. From then on, Silvie pursued a mix of different educational experiences to meet the annual New York Board of Education schooling requirements, supplementing her learning with online classes and crash courses from digital learning programs.

Silvie has taken advantage of the freedom of homeschooling: She’s pursued history classes and research opportunities at the New-York Historical Society, learned biology from a veterinarian with a group of other homeschooled students, tutored other homeschooled students in cell biology, took online classes in chemistry with friends through the Johns Hopkins Center for Talented Youth program, and participated in a literary co-op, among other things. Outside the nontraditional classroom, Silvie was able to pursue her interests such as ballet, choreography in modern dance, guitar with greater depth and more freedom at the Art Students League of New York.

“It’s not schooling at home as much as taking responsibilities for school at home,” Katie Smethurst, Silvie’s mother, says. “You can choose how much group stuff you want to do and how much individual. It’s really like a classical education, and there’s so many resources in New York. And it’s just fun—it’s the most resourced, engaged community I’ve ever been involved with in my life.”

Building off of her previous mix of learning experiences, Silvie came into Barnard with a more flexible approach to education than her peers in the classroom. Between the two history classes she took at the College, she grappled with concepts unfamiliar to her before, such as delving into primary sources or exploring larger sociopolitical constructs with the same eager adaptability and resourcefulness that marked her homeschooling education. Silvie, alongside other auditors, has helped to bring a new sense of proactivity to the traditional attitude toward learning in the classroom.

This fall marks Silvie’s first semester at Mount Holyoke College, a women’s college in Massachusetts. She has yet to decide on a major, but plans to pursue medicine. In her first-year class of 509 students, she is one of only a handful who were homeschooled.

“At Barnard and Columbia, I feel like I kind of got an idea of an environment I liked,” Silvie says about her process choosing a college. “I liked how the people were really engaged. It gave me more of an idea of what to look for when I was sitting in on classes, how professors were and how they engaged. I think it might not have been on the forefront of my mind because there are so many factors when you’re applying, but [my experience at Barnard] definitely impacted my decision.”

Colpa thinks that, with auditors like Silvie, this impact goes both ways.

“I think Columbia can seem incredibly inaccessible,” she says. “There’s this divide. To have the possibility of people coming in from the community and not reinforcing this idea of the ivory tower, I think, is excellent for the community and good for Columbia.”