On Grief, and Lady Bird

On Grief, and Lady Bird 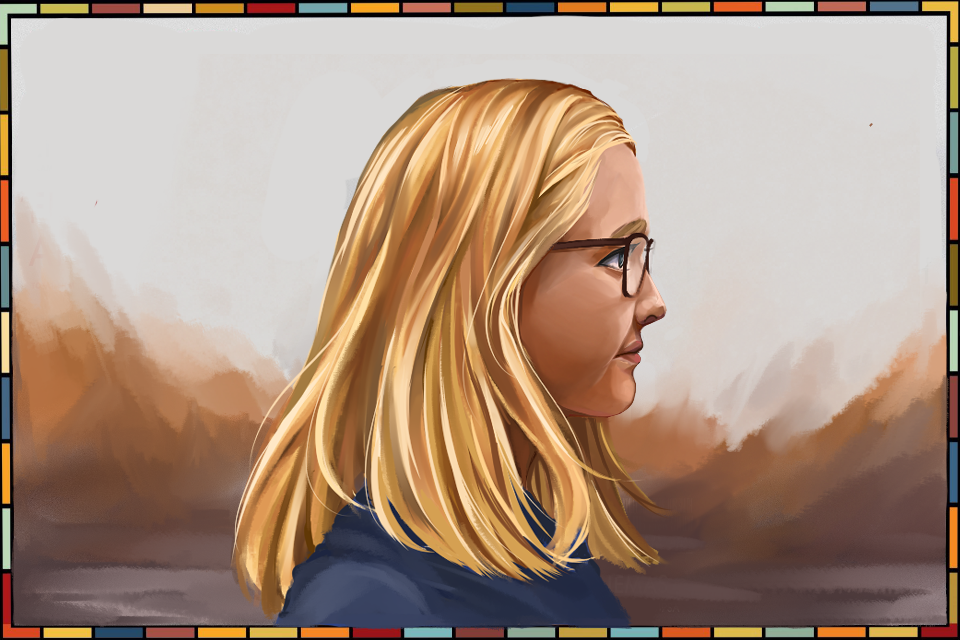 Sometimes, jostled by the 1 train, I miss driving. Colorado is a wide and open land; jagged, regal mountains spill into yellow plains under the expansive sky. Interstate 70 scrapes the side of Denver and curves westward to become a heavily trafficked, occasionally perilous mountain corridor. Its long tunnels, steep grades, and packs of long-haul trucks make me break out in hives, particularly in rain or snow.

I learned to drive with my dad in the passenger seat. We started with slow circles around a state office building and, over the course of months, worked up to the top of the Continental Divide, the mountainous ridge that separates North America’s eastern flowing rivers from those that run west. In June 2016, I drove up and over a mountain pass. In a photo from that day, my long hair pulls out of its braid. A snowy range of rockies frames me and my dad; he grins in sunglasses and holds the camera in front of us.

My dad grew up in a house eight blocks away from the one I live in now. During trips down from the high-country’s ski slopes and hiking trails, he offered commentary on the small towns that dot I-70, recalling the restaurants or gas stations in Idaho Springs that served his favorite breakfast burritos.

I think of these trips when I watch the opening of Greta Gerwig’s Lady Bird, in which a mother and daughter drive across a western landscape.

I first watched Lady Bird during Thanksgiving break my first year at Barnard. I was slightly older than the movie’s protagonist ever will be. My public arts school bore little resemblance to her Immaculate Heart High School, but the same through-lines—ill-fated relationships, colorfully painted bedroom walls, the desire to go east “where culture is, like New York, or at least Connecticut or New Hampshire, where writers live in the woods”—cast the film’s narrative into a personal register, as if the memories Gerwig explored were my own. I cried as Lady Bird stepped into the airport to leave for college, feeling that moment of rupture, of breakage, of becoming someone and leaving other people behind. When she emerged from a subway station lugging a suitcase, I felt the enclosure of the city’s soaring buildings, how different that confinement is from the uninhibited sprawl of a western sky.

I have since watched Lady Bird at Columbia’s Miller Theatre, in three Barnard dorms, on a bunk bed in the MIT frat house where I lived during my summer internship in Boston, and at home in the cool blue of my bedroom. The first few times I saw it, I felt that I was one of thousands of the movie’s core demographic: young women who had left their hometowns for big cities and liberal arts colleges; who aimed, abstractly, to be writers or performers; who fought with their mothers; who wanted to be thinner; who painted their nails badly; who were confused about religion; who made weird collages; who lied and regretted it; who were preoccupied with Howard Zinn. Now the elegy I hear while the film plays is mine alone. Last February, my father died. That was the rupture; this is the aftermath.

My dad had a fatal heart attack on a winter morning while running on a trail near his office. That evening, I flew back to Colorado, feeling numb and confused. Three weeks at home passed and I can’t quite remember them. I came back to school after spring break, made up my midterm exams and spent a lot of time laying in bed and reading children’s books. I wrote essays on the same day that they were due; I had never done that before. I was angry most of the time. The year ended and I returned to Denver, a home that wasn’t really home, at least not the way it had been.

At the end of the movie, after Lady Bird has left home, she leaves her mother a voicemail. She asks: “Did you feel emotional the first time you drove in Sacramento?” The image on the screen fades from a Manhattan church courtyard to a car driving along a wide road in California. Lady Bird is in the driver’s seat; her movements are small and easy and her gaze is soft, but she’s paying attention. “All those bends I’ve known my whole life,” the voicemail continues, and we get a series of vignettes: a cat in an alley, houses on a shady street, people walking in a public garden. Lady Bird is suddenly replaced in the driver’s seat by her mother, in nurse’s scrubs, whose observant eyes and relaxed arms parallel Lady Bird’s. The California landscape is draped in thick golden sun, which looks like the evening sun in Denver. The last words of Lady Bird’s message are “thank you.” She repeats the phrase and closes her cell phone, alone again in New York.

Lady Bird is about leaving, about endings. Lady Bird has to run away from the city that shaped her to understand her relationship to it; she parts from her parents and, in doing so, realizes the depth of her connection to them. In the director’s commentary to the movie, cinematographer Sam Levy describes “an aesthetic of memory.” Each scene feels like a different remembered moment, touched sometimes by nostalgia, sometimes by bitterness.

Before leaving for college, Lady Bird takes down the posters and string lights from the walls of her childhood bedroom. White paint and a roller brush cover light pink, erasing the names of boys Lady Bird thought she loved and doodles in crayon. This is an ending; it can’t be undone.

Back on campus, I have a new room. There is a Colorado flag hanging above my bed and, under it, a picture of me, about four years old and wearing a Piglet costume, perched on my father’s shoulders. From my bed I can see into Harlem, lights and buildings and lives packed close in the city. The new tower rising on 122nd Street cuts the sky down to size and blocks the sun as it sets. On bad days, I wake up angry with an open wound. My mind unwraps and won’t hold schoolwork. Instead of doing my readings, I trace I-70 on a satellite image and scroll old pictures on my phone. If I could, I would drive home. Instead, I watch Lady Bird.