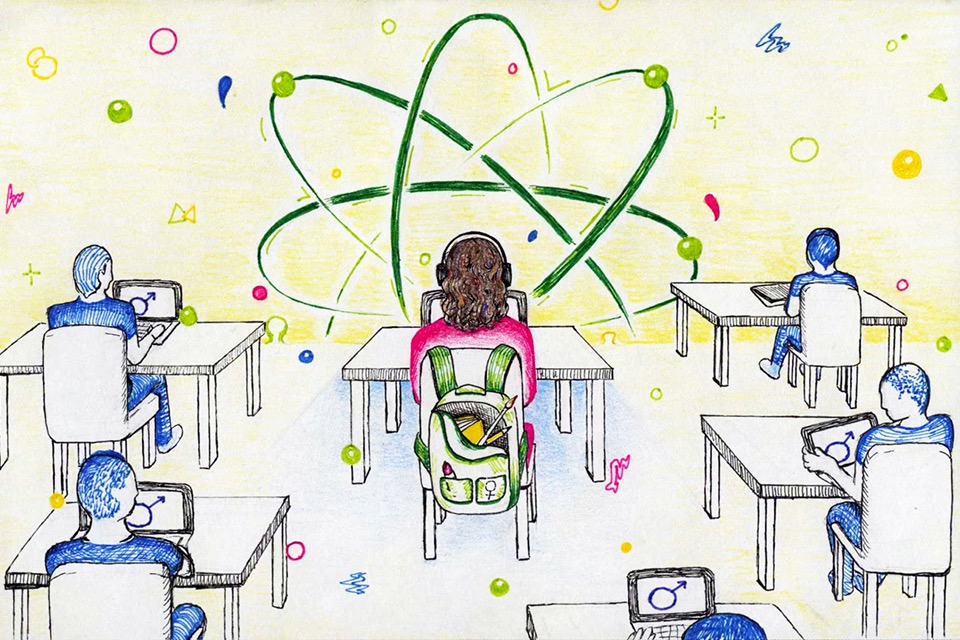 Summer in globally-warmed New York City is the cruelest of seasons. The 90-degree sun melts the skyline to a sooty mirage, and the air curdles. A merciless landscape for a curly-haired 18-year-old prone to fainting in the heat. Even the gum-scarred sidewalks sweat. In the past, I had escaped to the verdant hills of the Adirondacks to study violin. But music costs money until you’re trained, lucky, and brave enough to make your own. This summer, it was time to get a job and save for college expenses, and practicing in my room wasn’t going to cover the cost of my Lit Hum books.

So began my story in a newly-renovated quantum physics lab in a renowned New York City university. In high school, I had taken several physics courses and enjoyed them, despite daily sexist remarks from the notorious and exclusively male physics teachers. Still, I didn’t know if I had what it took to “do real science, not just make A’s.” I applied around and found this job through the son of an old family friend, a Ph.D. student there who had offered me a tour several months before. He introduced me to the principal investigator, who took me into his office, scribbled quantum nonsense on a chalkboard for 20 minutes as I took hieroglyphic notes, asked me to explain it back to him, and offered me a position as a research intern. The PI then brought me with his team to a Greek restaurant around the corner and let me listen while they joked about particle accelerators.

At first my days were bearable, if boring. I arrived and made my way to a fluorescent-lit room with a large grey table and a mass of wheeled red chairs, where the other members of the program congregated. At first, we interacted little; a week in, I bit the bullet and asked everyone to go around and say their names, no one of higher authority having thought to do so earlier. But most of us eventually became friends, talking animatedly about, among other things, Minecraft, metal forges, the space-time-continuum, density matrices, silent auctions, and Pokémon. I once tried to talk about books, but they, it emerged, thought Crime and Punishment was a cop show. I was one of only a handful of women in the program, most of whom remained silent during these interactions. I would take my seat, open my laptop and notebook laced with doodles, and quietly get to work.

Despite the glaring evidence that I belonged just about anywhere else, I knew from the start that I was an outcast of my own making. I embraced and, perhaps, exaggerated how out-of-place I felt there. I woke up early to put on eyeliner and dressed in skirts and dresses to rebel against the unspoken dress code of T-shirts, socks, and Tevas, bringing a change of pants in case they called me in to work with dangerous chemical substances. I left my books out ostentatiously on the table and listened to rotating playlists of ’60s rock, ’50s jazz, and 19th century string quartets. I stuck out doubly: a liberal arts kid in a room full of engineers and a woman in an extremely male workplace. The ladies’ room, for example, had no receptacles for feminine products and a rickety wall-mounted tampon dispenser that had clearly remained empty for years. The room was equally empty of women themselves: Out of dozens of trips to check my lipstick in the mirrors, I ran into another human being only once.

Day-to-day life in the lab quickly drove me to madness. Three hours into writing code, the letters fell hollow in my brain, and I slipped away to a couch against a wall where no one could see my screen and wrote my novel for the remaining five hours of the day. I soon found that only about 30 percent of lab time constitutes work—the rest, awaiting results.

Despite my mother’s repeated offers to let me quit and find another job, I insisted on staying just one more week, then one more, then one more. At the time, I said that I wasn’t a quitter. By the end of the program, however, I began to realize that it was more complicated than that. I faced a gendered pressure different from the one my teachers used to warn me against. I was prepared for the pressure to drop out, and I did feel inadequate. But the voices in my head instead pushed me to stay. I felt that if I chose humanities over STEM, I would be just another statistic proving girls are bad at math. I would be letting women down everywhere if I backed down, no matter how miserable I was reading QuTiP documentation and cutting copper brackets.

So I stayed. Somehow, I seemed to impress my supervisors, and as the summer went on, my confidence rose. By the end of the program, I was even trying to fit in. I learned the jargon, joked with the three guys in my presentation group about sports I knew nothing about and how many times I’ll re-wear a T-shirt before I wash it (once, for the record), and took on as many hands-on projects as I could to prove I didn’t care about breaking a nail.

In the eighth week, when a bombastic software engineer I’ll call Jerry offered to take myself and two of the other women in the lab to the leading financial technology firm where he worked to present on our progress, I accepted. Though I had my doubts about why I was picked, I eventually assured myself that I had done well enough to stand out. Maybe, I told myself, this was for me.

The August afternoon came. Jerry met us—three of the four women in the thirty-person lab—and took us to his offices at a leading financial technology company. Ten or so men in identical suits and nearly identical faces walked sturdily and confidently into the conference room with us. Jerry introduced himself and encouraged them to go around and do the same. They went down the line. Having now experienced NSOP, the memory amuses me: It was the corporate version of name, pronouns, school, major, and what I would be called if I were a 1980’s alternative rock band. Each offered his name, position, specialty, and concluded with, “He’s my boss,” pointing to a man with long grey hair, no suit jacket, and satisfied eyes at the center of the group.

I had prepared a lesson on Qiskit about building quantum circuits, simulating device noise, and characterizing quantum states. Even writing these words, I feel valuable and intelligent. My heart sank when the men asked us to skip what we had learned over the summer and explain the software’s applications to finance. I read line-by-line a page of documentation on portfolio optimization, and they left as soon as I had finished. My presentation remained unopened.

As we gathered our things to leave, Jerry stopped us. He had to be frank, he said. He had requested, he told us, that female members of the program come present to reverse a long-standing power dynamic. It was important to him that under-represented groups make their way into the field of quantum physics. When he was in college, he had observed disproportionate numbers of high-achieving female students dropping out. He saw me as someone who needed his help.

Surely, he was doing the right thing, but his explanation knocked the wind out of me. The whole summer flashed before my eyes—the hours of fluorescent-lit struggle and the deadened language of coding textbooks, the way even my isolation felt self-indulgent, perhaps imagined. Who was I to complain about an empty tampon dispenser?

Suddenly, my eight weeks of perceived martyrdom felt meaningless. The confidence I had developed in myself evaporated, invalidated. Jerry, and, perhaps even the lab—I shuddered at the thought—had chosen me for the precise reason that I was a woman. They weren’t trying to force me out; I was. My primary rationale for staying, when it came down to it, had been to show that women could stay, but the point I had been hoping to prove had already been made. I was left with a blunt fact: I was unhappy there.

We thanked him, and he took the other two to dinner. I insisted on heading home alone. I wanted to practice violin.