The Columbia Minecraft Club: Building a Community, Block by Block

The Columbia Minecraft Club: Building a Community, Block by Block

An arrow whizzes by my head—it narrowly misses. As I spend that moment fixated on the near-death experience I’ve just endured, my pursuer appears, promptly taking away any relief I may have had. He wields an iron sword and proceeds to mercilessly assail my character, who I’ve customized to look like Wolfgang Amadeus Mozart, winning the battle. In the process of all this, he screams, “easy, easy dub,” exposing me for the noob I am.

Gathered in the John Jay lounge is Columbia’s Minecraft Club—a ragtag, underground group dedicated to playing Minecraft weekly. A still-budding club, students from across campus gather together in the first-year residence hall to leave the world of college stress and transport themselves back to middle school. With so many competitive clubs on Columbia’s campus, Columbia’s Minecraft club invites students across campus, regardless of their familiarity with the game, to join a community of friends. According to members of the club, it provides relief from the sometimes harsh reality of campus life—the virtual world is a quick escape.

Released in 2009, Minecraft is centered around digging, building, and thriving in a world where players start with nothing. The possibilities are quite literally endless—the only confines being the imaginations of the players. Everything in the game is comprised of blocks, including dirt blocks, cobblestone blocks, various ore blocks, and even blocks of solid diamond, for the particularly affluent within the game.

An important facet of the game is its lack of instructions. Players are placed into an unexplored world of mountains, forests, deserts, and even arctic regions, and are forced to forge their own stories while avoiding perilous fates at the hands of terrifying creatures, including zombies and skeletons. Not long after its release, Minecraft became a sort of cultural phenomenon, with a large presence on YouTube, where content creators record themselves playing the game and share it with the world.

The founders, Aryana Thompson, Dawson Franz, and Cody Baynori, are all first-years in Columbia College, and met in the Columbia 2023 GroupMe. At the start of the summer, Baynori posted a meme hinting at the creation of a Columbia Minecraft server, and the three have been playing ever since. Thompson says she has been playing the game without pause almost since it was released. To members of the club, the game is more than just a game—it is the definition of their preteen and teenage years. Franz tells me he has played “on and off for years,” but ultimately “always came back to Minecraft” since he started playing in the seventh grade. Baynori describes his middle school routine as going to school, coming home, and playing—or watching others play—Minecraft. 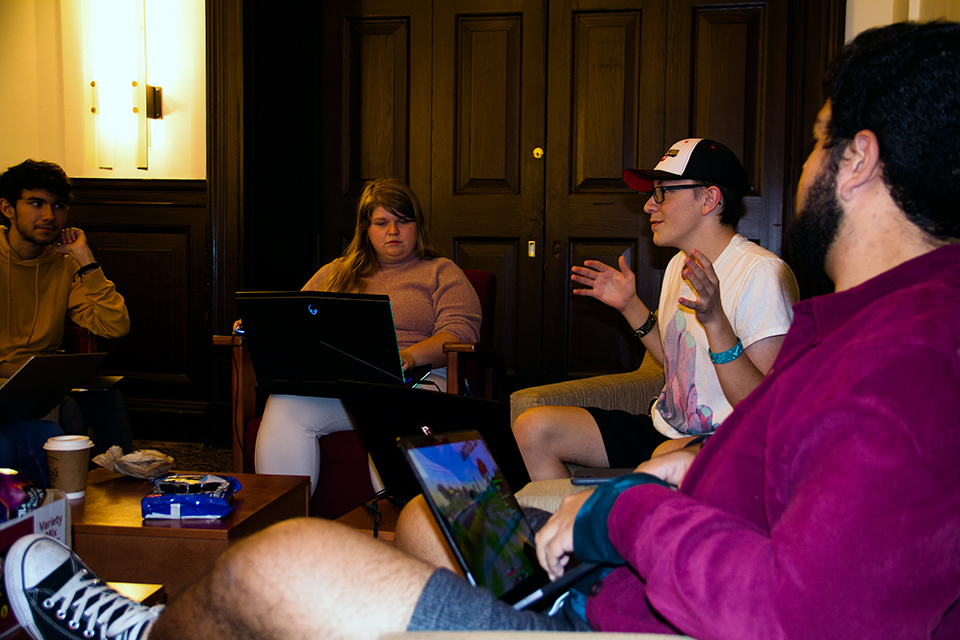 I can see the club’s appeal as I boot up the game on my laptop; I’m immediately reminded of the amount of time I spent playing the game in junior high. I’m shocked I even remember my username and password, but soon the memories of late summer nights playing Minecraft come flooding back to me—a time when my only responsibilities in life included little more than building a cool-looking mansion for my character alongside some friends over Skype.

At the same time, there is a small speaker placed near Thompson, blaring a playlist comprised of Minecraft themed parodies of Top 40 Hits. The room sings along in disjunct harmony with intense enthusiasm. Franz tells me that the songs are being played “for the memes.” I ask Baynori what his favorite song is. He sings a little bit of it quietly, and tells me the name: “Cube Land.”

There is discussion of various battle tactics, combined with the sound of rattling keyboards as I log on to the server that the entire lounge seems to be on and am immediately invited to the party, with Thompson insisting that the group wait to start the game so that I can join. After successfully getting in, I am informed by someone who seems to be a veteran in Minecraft combat that we’re playing a tournament-styled series of solo, one versus one combat. The first round begins, and naturally, I’m struck by an arrow and immediately die. There are sounds of other people shouting, the distressed sighs of defeat, and, from combat veteran and SEAS freshman Ameen DaCosta’s computer, digital fireworks, signaling victory. He gloats, and then another minigame starts. I’m on a team with DaCosta.

“I need a better teammate,” he says, laughing as I struggle.

Over the hour and a half I spend with the Minecraft Club, the players fluctuate, with some leaving and more joining at their leisure. Franz tells me that there are more than fifty people in their GroupMe. Baynori laughs and says, “All fifty of us are co-founders.” After playing minigames for a while, the group splits into two, with a few moving onto the official Columbia University Minecraft server, while others get even more competitive, playing what they call the “Minecraft Hunger Games.” I log on to the official server and am immediately greeted by a large Columbia crest created out of differently colored blocks of wool.

I ask a member of the club, Grace Fox, another first-year at Columbia College, to give me a tour of the server. As we wander around the server, she lovingly throws out compliments to the buildings: this one is “cute,” that one is “gorgeous” and “adorable.” She tells me that there was a server-wide effort to build a subway system, akin to the New York City metro, within the game. I head down the tunnel and have the option to take the Red, Blue, or Green subway lines. Fox takes me onto the red line and shows me some of the community buildings, such as a greenhouse, where everyone on the server gets fed digitally.

We pass by Thompson’s carrot farm. “I decided that when I went vegan, I was going to go vegan in Minecraft, too,” Thompson says.“Now I literally live off of carrots from my carrot farm, which is a fun way to bring reality to Minecraft.” This online community is called “Mountainside Heights.” Built within a mountain valley, it is a digital and parallel community to Morningside Heights. Thompson tells me about the club’s ambitious plan to reconstruct the entirety of Columbia’s campus to scale. They have all had some experience in recreating New York City landmarks, though—there is already a large and daunting reconstruction of the Empire State Building in the center of this entire map. To my left is the RBG Lighthouse, created by Baynori, in honor of Supreme Court Justice Ruth Bader Ginsburg.

Everything in the world is seemingly adorned with the blue and white colors of Columbia. The server is a place for anybody to create anything, and the community welcomes every new addition made. The world that they have created on the server is a digital representation of the atmosphere the club fosters—one which feels collaborative yet lighthearted. Members are encouraged to add whatever they please to “Mountainside Heights” in order to lend more personality to the server. I attempt to build my dorm room, Carman 703, which does not look as pleasant as I had hoped, though I am personally complacent with it. For many club members, the world serves as a way to create an idealized community that is seemingly elusive in real life. For me, that means building a Carman 703 without cockroaches. For Baynori, it entails creating these almost tributary monuments to people such as Ruth Bader Ginsburg and Shirley Chisholm. 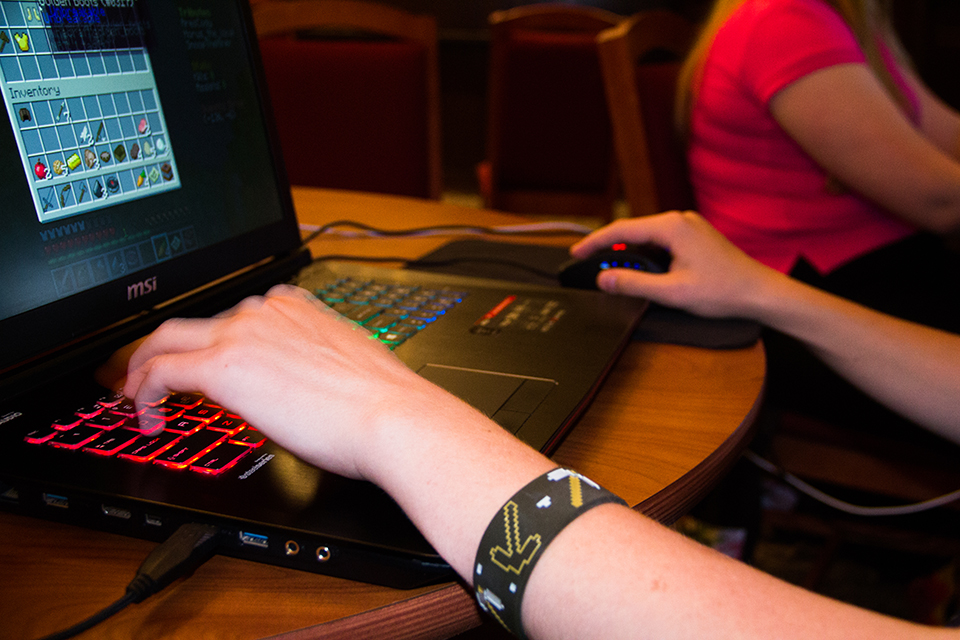 The friendships in this club extend beyond the server—Baynori mentions a recent excursion the club had taken, saying, “Aryana and I were sitting, trying to find things we could do off campus for our club, and one of the things we found was a Minecon live viewing party at the Microsoft store in Times Square. “So we all went down!” Franz, wearing a Minecon hat he received at the event, describes it as an incredible community experience. The club, not officially recognized by the University, has to get creative with their advertising—primarily through social media and posters hung on first-year dorm bulletin boards—and overall expenses. Recently, they were contacted by the manager of the Microsoft store, who offered to organize a private event exclusively for the Columbia Minecraft Club.

Their ultimate goal is to make the club accessible to anybody who wishes to join. “Anyone can join if they’ve heard of Minecraft or just want to figure out what Minecraft is,” Franz says. “We don’t have a super selective process of inviting people—they just show up.”

Baynori sees the club as an escape from Columbia’s seemingly apparent stress culture, using the club as a way to “not think about the looming pile of stuff” he has to complete on the weekend. Minecraft Club is a place where he can “hang out with friends, eat some Oreos, and have fun.”

In a period where adulthood is looming over our lives and with the pressure of internships, careers, and academic pressure to succeed, it can be easy to give in to the pressure of growing up. The Minecraft club, however, refuses to give in to the concept of adulting. Participants in the club are transported to a stress-free world for an hour and a half on Fridays, ignoring all else. All the while, they foster a strong community, where everybody becomes friends outside of the club—taking the pleasant experiences they have with other members and building a tight-knit group of friends.

“It was always kind of an escape for me. I never brought it into school, like, I never told anyone that I knew that I played Minecraft,” says Thompson. “It's really nice to just play Minecraft with people I know because it's always been more of a way to escape from reality, but now I guess it’s more apart of my reality.”

As the club members play, I look up to the mantle above the fireplace in the John Jay lounge: “Hold fast to the spirit of youth—let years to come do what they may.” I can’t help but think the Minecraft Club at Columbia is holding onto that spirit of youth—finding a way to stay young in a world forcing them to grow old.