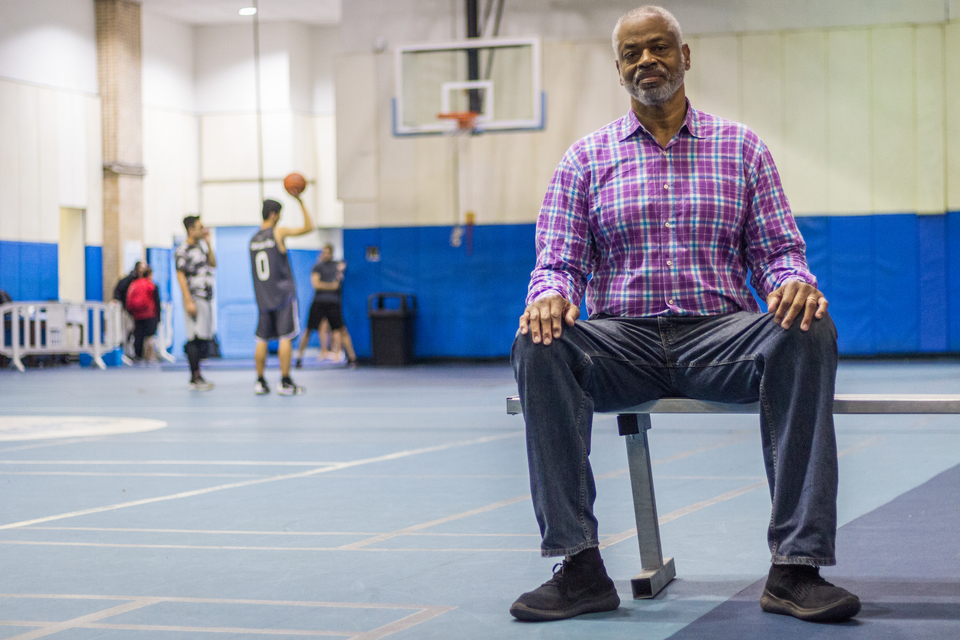 “Apple does this to you all the time. I had some action shots. I don't know what they did with it."

We’re seated in an empty classroom on the fifth floor of Lewisohn Hall. It’s not a terribly small space, but Leonard Elmore certainly makes it feel that way. His lanky 6-foot-9 figure dwarfs the orange chair he sits on.

Elmore is the Senior Lecturer in the Discipline of Sports Management at the School of Professional Studies. Prior to this, Elmore was a force to be reckoned with on the basketball court, playing both at the University of Maryland and throughout a decade-long career in the NBA.

I can’t help but crack a smile at this technological dilemma. Given the nonchalance with which he discusses the harrowing obstacles he has encountered throughout his life, I thought an Apple software update would be the last thing to faze him.

Despite his initial fumbles with iOS 13, Elmore eventually finds a picture of a poster plastered to the wall of his home. Tommie Smith and John Carlos stand together, heads bowed, solemnly raising gloved fists in the air in protest during the 1968 Mexico City Olympics. His poster is signed by Smith himself. In many ways, Len Elmore is akin to the men in this iconic image: He is an activist and an athlete, and in that order. As a lifelong practitioner of a subtle, quiet form of activism, he never yearned for the spotlight, but found it shone upon him anyway.

Elmore was born in the Brooklyn housing projects in 1952 to a sanitation worker and a clerk, both of whom did not attend college. “Education above everything” was the unofficial mantra of the household. The family incurred debt to purchase a set of encyclopedias. From a young age, he was interested in the rampant social activism amidst the Civil Rights Movement and opposition to the conflict in Vietnam. He grew up watching “The Defenders,” a courtroom drama, where he realized that “law was the voice for the voiceless.” By the time middle school rolled around, Elmore aspired to be a lawyer.

“My analogy is, I didn't want to be a bystander watching the parade go by,” he says. “I wanted to be in that parade.”

Elmore’s first foray into basketball was a complete accident. He originally preferred baseball, but a sudden growth spurt and gentle encouragement from his PE teacher changed that. (In seventh grade, Elmore towered over his peers at 6-foot-4.) After seeing Elmore goof around on the basketball court, his PE teacher encouraged him to switch sports. “He finally got to me and said, ‘Don't you want to play with people your size?’” Elmore laughs, a hearty chuckle that tickles the walls of our conference room. He was recruited to Power Memorial Academy, a high school basketball powerhouse in New York City, and earned a scholarship to the University of Maryland afterward.

In college, Elmore was thrust onto a campus rife with protests over the Vietnam War. In the fall of his first year, thousands of students protested in College Park, bravely confronting the National Guard and their use of tear gas. As an athlete, he was instructed not to join the protests or face the loss of his scholarship. On the court, Elmore was a shining star, co-captaining his team and earning All-American accolades, a to-be first round pick in the NBA Draft. Off it, he was benched, his activist dreams sidelined by an oppressive administration. Elmore’s parade finally arrived, yet he had been relegated to the role of bystander. In that moment, he discovered a different form of activism that would inspire the rest of his life.

As an English major, he found his activism in the classroom, through his writing and the interpretations of literary texts that he ventured into during discussions. Outside the classroom, he led an afterschool program for junior high school kids in nearby Seat Pleasant, ultimately earning the University of Maryland Citizenship Award upon graduation.

As an NBA player, he embraced the less glorious task of collecting offensive rebounds and not chasing highlight reel plays. Over his ten-year career, Elmore played for the Pacers, Kings, Bucks, Nets, and Knicks. On the court, he adopted two different personas: To his own team, he was a senior co-captain that led by example, but to the other team, he was a vicious shotblocker and intimidator with a permanent scowl etched on his face.

Somehow, he easily recalls precise movements and plays that occurred nearly four decades ago. As he thinks, I can see his cerebral basketball acumen, a trait developed to mitigate years of being undersized and overpowered by opposing players. He shows me another picture on his phone. It’s the cover of the December 1973 issue of Sports Illustrated that features Elmore, leaping into the air, right arm raised skyhigh, vociferously guarding University of California at Los Angeles’ Bill Walton.

“We could've broken their streak. We lost to them by 1 at Pauley Pavilion. We were actually robbed,” Elmore says. While he never pursued individual glory on the court, he was still ambitious. I can see the wistfulness in his eyes, the foregone remnants of a fiery drive to deliver a national championship to College Park.

Ironically, we are on opposite sides of this college basketball rivalry. I grew up cheering for the Bruins at Pauley Pavilion, and I vividly recall Bill Walton’s #32 jersey enshrined in the rafters. When I tell him this, Elmore laughs with a twinkle in his eyes, like he knew something I didn’t.

Prior to the game against UCLA, Elmore tells me, he spent the whole summer poring over a single film reel of Bill Walton’s play against another school, Memphis State—all to prepare for the matchup.

The hard work paid off. “So [UCLA] got the ball the first possession. They throw it in to him. And he makes a fake to the right, and he tries to cut across the lane and lay it up. And I knocked it. I blocked it over the bench.” As Elmore talks, he springs to life, reenacting the plays and relishing the memory. “Coach Wooden [of UCLA] ... he had to duck because it almost hit him in the head.” This passionate style of play on the court corresponds to his brand of activism. He is aggressive, yet he doesn’t seek renown.

“My activism hasn't been that of a rabble rouser, get on the podium, scream through the bullhorn,” he tells me. “I've actively, whether it's in college running a program for junior high school kids, or whether through example, verbally tried to change the minds of my teammates and people whom I come in contact with.”

Tragedy struck in his early adulthood. “My brothers were victims of the drug epidemic,” Elmore tells me. When I ask about the impact these deaths left on him, he turns solemn and soft-spoken. “There wasn't a whole lot I could do. It was a question of reality,” he admits. “I got out from our neighborhood. Basketball took me out.”

Next to the neighborhood where they lived, he describes, was a predominantly white housing cooperative called Rochdale Village. The white kids who lived there distributed psychedelic drugs to the black kids—yet, blame was placed upon the black kids, he tells me. “No community is immune,” he states. “When we talk about common ground, we have so many things in common. And that strikes me today. So many communities have things in common, yet we dwell on the differences.”

After his decade-long career in the NBA, Elmore decided to pursue a career in law. He joined the Kings County District Attorney's Office, returning to his hometown and prosecuting criminals in the pursuit of justice. Later, he moved on to corporate law in order to raise a family in Manhattan.

Elmore has navigated a variety of careers throughout his life, from professional athlete to attorney to broadcast announcer to chief executive. Now, his next step is academia. He’s passionate about teaching and strives to engage with his students. Despite his short tenure at Columbia thus far, he loves it. “I'll stay [at Columbia] as long as they want me,” he quips.

Currently, Elmore teaches courses on athlete activism and leadership management. He also supervises a group of students who work with the NFL to help implement their social justice initiative. This is his second year as a full-time professor at the University, but he is not entirely new to campus; in 2008, he taught a class on sports media as an adjunct professor. His son, Matthew Elmore, graduated from Columbia College in 2015.

In his time at Columbia, Elmore hopes to help mold and shape the leaders of tomorrow. “I hope I've given them a foundation upon which they stay curious and upon which they can work to find solutions,” he explains. “If I can do that, when it's my time, I'm happy. I've contributed something positive.”

As we continue to talk, Elmore finds ways to assert his brand of progressivism and opinions about modern society. He critiques today’s era of commercialized college athletics and reminisces about the time when college athletes also pursued an education. “Right now, all everybody thinks about is one and done,” Elmore laments, referencing the NCAA mandate that all players spend at least one year in college before turning pro. “And if they didn't have to do one, they would do none. Every guy thinks the idea is to make money, not realizing how important education is.” Indeed, Elmore has repeatedly expressed opposition to paying college athletes, arguing that they receive enough with free access to a world-class education.

Nearly two hours after our conversation began, we exit Lewisohn and wade into the pouring rain. The sun has long set. I see a student slosh past us in flip flops, frantically headed for shelter. Our umbrellas rattle back and forth in the wind. Soon, it’s just the two of us on Low Steps, enjoying a certain stillness amid the raging downpour.

As we pause beside Alma Mater, I can’t help but remember what Elmore told me about his mother, who inspired within him a love for education that remains today. She was salutatorian of her high school and earned a full scholarship to Southern University in Baton Rouge, but she was forced to turn it down and work to support her family. In an ironic twist of fate, the person who received that scholarship in her stead graduated from Southern University and earned his master’s degree at Columbia.

“Yeah, my mother, God rest her soul,” he said. “If she knew I was teaching and her grandson graduated from Columbia, I don't know how she'd feel. She'd probably really enjoy it.”