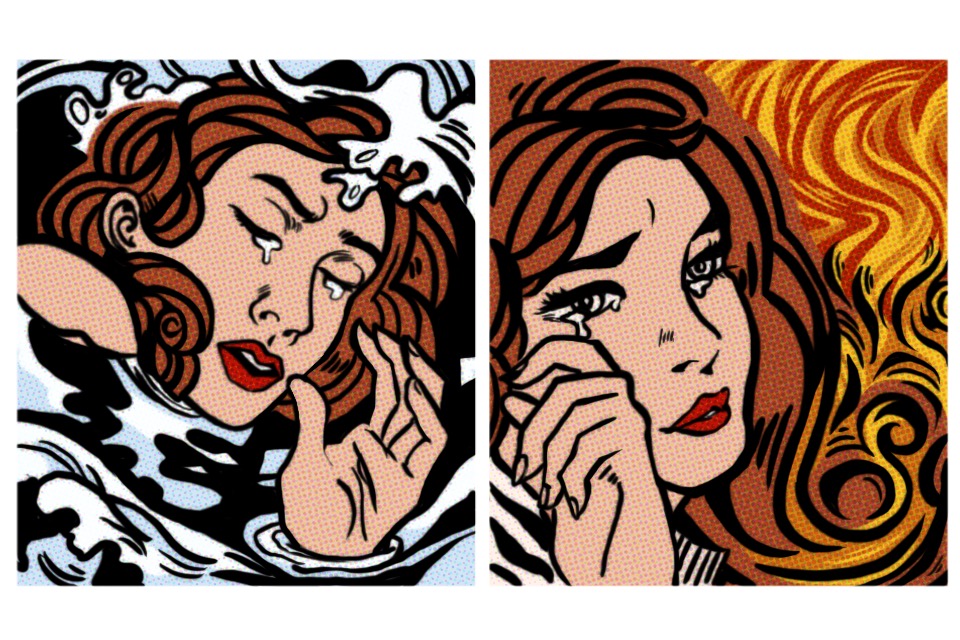 On a table beside my bed lay a ticking time bomb. A ringer, unsilenced. Suddenly, an incessant stream of dings.

I woke violently—lurched forward. At this hour? I was peeved; I had been dreaming. I reached for my phone. I read texts from friends back home.

Sonoma is on fire. Evacuate immediately.

Two thousand, five hundred and fifty-seven miles away from California, I sat upright amid cotton sheets. I had already reached refuge. In a room. In a dorm. In a city still strange to me. I called my family. No answer. I sent texts.

What’s happening? Is there really a fire?

Mom responded while driving. They had been sleeping when the neighbors called. “Thank God they did,” she said. The County had not issued a warning.

Sonoma is on fire. Evacuate immediately.

With five minutes to leave, they grabbed the essentials. Computers. Phones. Chargers. Grandmama. Our dog, Teddy. They were fleeing, but free. I sent a text punctuated with a red heart emoji and sobbed myself back to unconsciousness.

My alarm sounded at 9:43 a.m. I opened my eyes. I grabbed my iClicker. I trekked to 120th and Broadway. I was late to lecture. Frontiers of Science. General relativity and black holes. I sunk into my seat.

Stuck to my screen, I texted my parents. I tracked the fires. I parsed articles and awaited updates. I scrolled galleries.

Clouds cascaded like spilled milk over sloping hills. Licking the landscape, the tongue of fire meandered through forests and fields and semi-urban suburbia. It did not savor Wine Country. It devoured the region whole. Countless structures and symbols of home.

In spirit, I was spectral. In body, I wished to be. In fact, I was unfortunately observable. After lecture, my friends found me. We walked back to our dorm together. My phone rang as I entered the elevator. It was Dad. I signaled an “I’ll catch up with you later” and answered. He had returned that morning to find our home.

I asked him to send photos.

Smolder waterfalled from blackened debris. A subdued honey sky. Morning light imposing tranquility upon the scene. I breathed in the spectacle. It was almost beautiful. A sea of powder and porcelain. I swam in the smoke. I sifted the unrecognizable rubble. All semblance of a house washed away with the wind—its memory familiar yet fragmented in my mind. I pieced the place together again with the markers that remained. The chimney. The stone wall around our once plenteous garden. The Valley Oaks outside my old bedroom window. Scorched, the aged trees stood in disobedience. 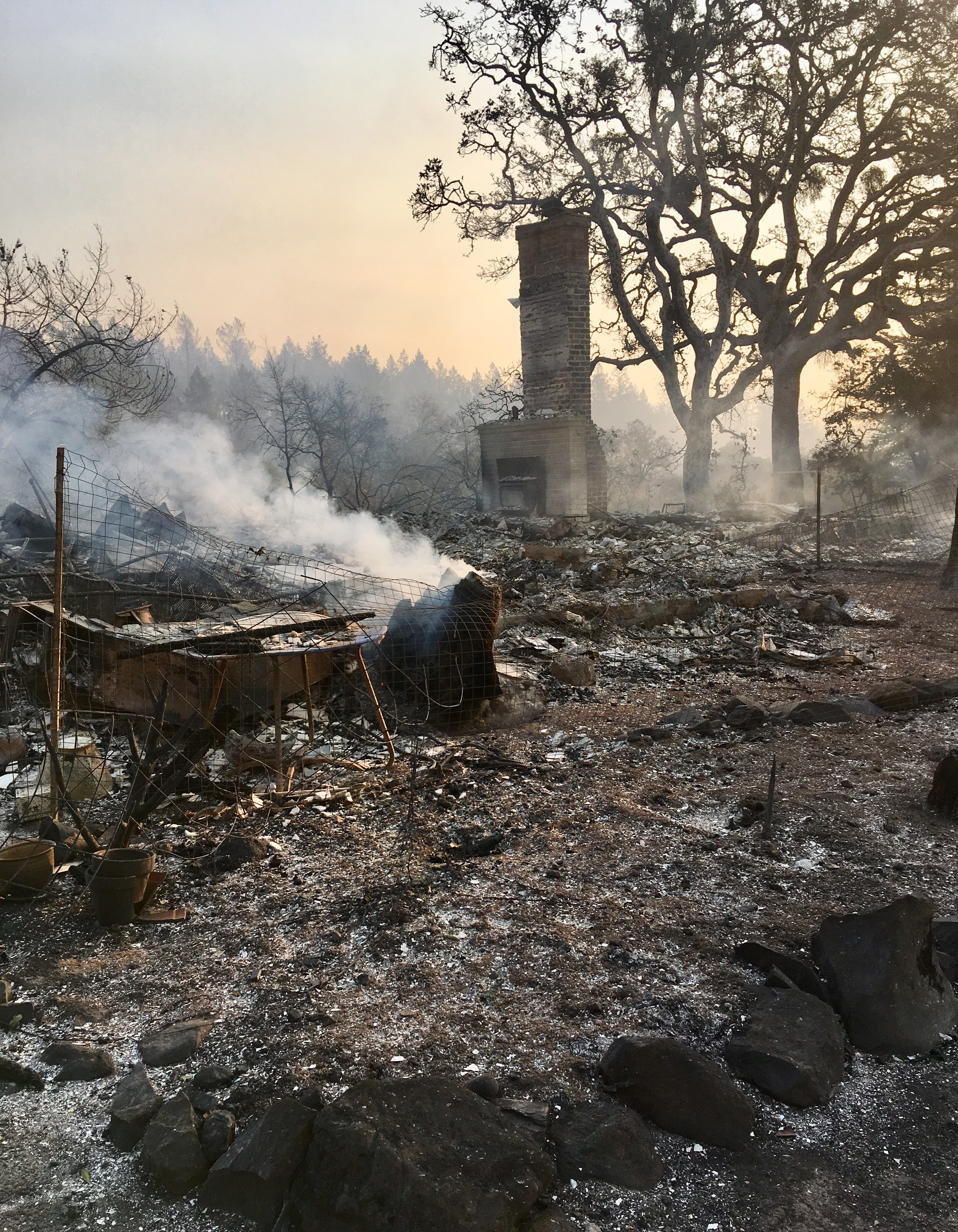 I was heartbroken, but hungry. I gathered my tears. I washed my face with water. Walking across campus, I bowed my head and counted the cracks. At breakfast, I told my friend.

My house burned down. My family barely made it out. My home was still burning.

Out loud, it sounded surreal. I sobbed in the middle of Ferris. Roy Lichtenstein’s Crying Girl. I crimsoned. I regretted the spectacle. I apologized repeatedly.

I spent the rest of the day in my room. I cataloged its components. Four walls. A bed, desk, and chair. A closet filled with fall clothes. Sneakers. Sweaters. Socks. Light layers. I remembered the packing job I executed an hour prior to leaving for the airport in August. A master procrastinator, I had boasted. I was no longer proud.

I thought of things.

Those I had forgotten. Those purposefully left behind. Family heirlooms I did not dare take to a big city. The ring Grandmama gave me before graduation. I had worn it every day since May, but deemed it safer to take off and lock away. In a box. In a drawer. In a vanity. In a small town far away. I thought of practical things. My down coat, not yet shipped. I felt a draft, real or imagined. I shivered. I dreaded winter. I thought of sentimental things. Family photos. Homemade ornaments. My sister’s antique rocking horse, a gift from Santa. Mom’s wedding dress.

My material world, now neatly contained within three suitcases. I regretted the selfish comparison. I pivoted to self-reproach. A world away, my 13-year-old sister was without a toothbrush.

With a reading due and Lit Hum that evening, I resigned myself to my studies. I attempted the Bible, but cried, desecrating its pages with salt water. I reread Genesis 20 times over.

Are you there God? It’s me, Elizabeth.

I had never believed in capital-G God, but I required an explanation. I thought of Grandmama, a 90-year-old devout Catholic. How she prayed to him. Studied his scriptures. Built him a church: Star of the Valley. She went on Sundays, Tuesdays, Thursdays, Fridays. A lifetime of faith. They had moved from a concrete city to a forest. New beginnings up north. On a piece of bare land, Grandpa built a house. She planted redwoods. He passed away peacefully. She dreamed of dying in the same bed as her husband. It turned to dust.

While reading, I contemplated the great flood. How God had apprised Noah of its imminence and instructed him to construct an ark. How he had not granted the same courtesy to my family. My friends. The estimated 38,500 undocumented immigrants in Sonoma County without access to government aid.

We were quizzed in class. I bombed. I knew the story of the beginning, but its details eluded me. I choked on my words in discussion and surrendered to silence. I listened, but my thoughts drifted home. I did not care about Adam or Eve or carnal lust. I cared about the thousands of structures already lost.

As flames consumed California, it rained in New York. As smoke filled the lungs of loved ones, I ran in Riverside and breathed in unadulterated oxygen.

But no amount of water or earth or atmosphere could soothe me. Thank God Mom’s phone was off “Do Not Disturb.” Thank God she heard the ring. Thank God she answered. Panic attacked my body. Outside. In the park. In the rain. In the open air. I could not breathe. I felt a roof caving in overhead. I regretted the feeling; I was already safe.

I thought of the married couple in Santa Rosa, trapped without warning. How they took shelter overnight in their pool. How they came up periodically for air but instead breathed in poison. How they prayed. How he did not hear. How, in the end, she died of smoke inhalation.

For Lit Hum, I read The Histories by Herodotus. I absorbed nothing but Artabanus’s notion of happiness: Life is a kind of sweet suffering. One achieves happiness in death. I thought about the lives lost already.

We were quizzed in class. I bombed. I knew the story of the Persian War, but its details eluded me. I apologized to my professor for my performance. I feared the perception of negligence. As I spoke, my stoicism shattered. I had not cried for days. The drought had been a small victory, but I admitted defeat. Tears crashed against my cheeks like broken waves on the seashore.

Lichtenstein’s Drowning Girl. Inundated, I apologized. He lent me an unsure arm. A cold hand on my shaking shoulder. He told me not to worry. I couldn’t help it. I couldn’t care less about the grade. I wished I hadn’t told him.

The fire spread. The flames chased my family. I tried to track them. I kept my phone close, unsilenced, set to high volume—this time deliberately. A quarter of a million acres. Eight thousand, four hundred structures. Forty-two people.

The uncontrollable controlled me. I existed suboptimally. I walked across campus, attended lecture, attempted Lit Hum. I sat on Low. I ate food in Ferris. I laughed with friends. I went through the motions. I mourned. I wasn’t at home, and I wasn’t fully here. I was sparse. I should have been in both places.

I have learned to resign myself to tragedy, to relinquish control. Tubbs in Sonoma. Thomas in Santa Barbara. Camp in Paradise. Woolsey in Malibu. Kincade in Geyserville. Evacuations. Millions without power. Thousands permanently displaced. Fires continue to burn up and down California, as they seemingly will forever.

Each fall in New York, I am away from home during fire season. I immerse myself in math and Core classics and dream of rain in my dorm room at Columbia. Thousands of miles away from California aflame, I sleep with immunity; nothing can hurt me. Those amid the fires sleep restlessly. They dream of a violent awakening.