Travels With My Citizen Complex

Travels With My Citizen Complex 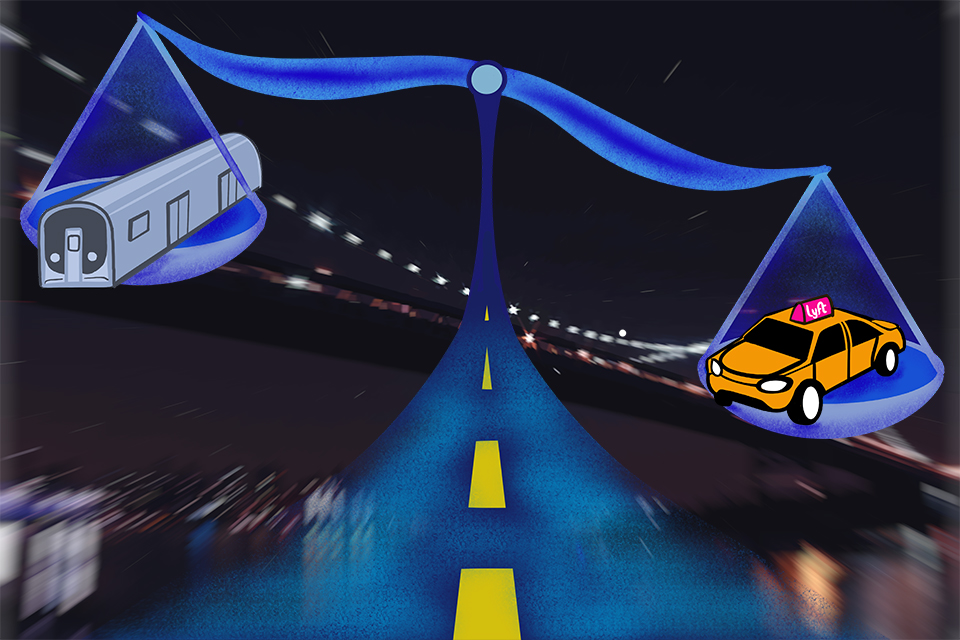 If I’m going to order a Lyft in this city, I better have a damn good excuse, because my conscience is a tough crowd. “Really, asshole?” I’ll challenge myself. Maybe it’s a steamy August day, and I’m due across town. “You’re not willing to stand on a bus for, like, an hour? You think you’re too good for the MTA? Maybe you’re not up for New York. Maybe some place like Boston is more your speed.”

That threat scares me straight. Dutifully, I board the M104 and assume the straphanger’s noble role, impressing only myself. That nagging, vaguely anti-capitalist node in the back of my brain—I call it my Citizen Complex—is sated. Will I support the destruction of New York’s public lifeblood at the hands of grossly unregulated corporations? Not today.

It’s not so easy to fashion myself a hearty democrat from the back seat of a Lyft. With the air-conditioning on full blast, I see my true colors: white, gray, and a hint of rose-gold, the tones of a ruthless technocracy.

Late that afternoon, I said a final goodbye to my great-uncle at a hospice facility in the Bronx. I needed to get back to my grandparents’ Manhattan apartment in time to accompany them to a Yom Kippur service. Citymapper told me that the best public transit route was a bus-to-subway bamboozler that would take hours, so I swallowed my pride and called an expensive Lyft.

“I’m Sam,” I told the driver as I climbed into the small car. He nodded and introduced himself. Then we draped ourselves in silence, as if agreeing to expel the sounds of rush-hour. We stayed quiet as the car wove through the highways and bridges and slipshod infrastructures that jut out of the Bronx. I had fallen asleep by the time we mounted the Triborough Bridge.

Blaring police sirens jolted me awake. The driver glanced in the rearview mirror, then eased out of traffic and onto the median of the bridge. We stayed silent while the cop parked behind us and moseyed toward the driver’s window. I glanced at my watch.

The cop tapped on the glass. “License and registration, please.”

The driver said something I couldn’t quite hear, and the two exchanged what sounded like tense words. No license or registration appeared.

“Wait here,” the officer said, and walked back to his car, his pace considerably quicker now.

“Sorry,” the driver said to me, softly, without turning around.

“No problem at all!” I replied, overcompensating. I was worried about being late, but I didn’t want to intensify the situation. I looked out the window and found Manhattan’s skyline suddenly and alarmingly distant.

After a few minutes at a standstill, I peered over my shoulder and saw more cop cars pull up next to the first one. Minutes dripped by. I couldn’t imagine what the cops were doing. “Why are they wasting my time?” I thought. “Who the hell do they think they are?” I pictured my grandparents trudging to synagogue alone, abandoned by their trusted and once-loved grandson. I texted friends about my predicament, and their exasperated sympathies only heightened my panic.

The cop finally returned to the window. Before he or the driver could say a word, I blurted, in one shaky breath, “This is a Lyft, and I’m just a passenger. May I get out of the car and walk? I’m really late. I’m late. I have to go.” My beads of sweat were visible.

I looked at my watch again. My throat closed a little, and my legs started to shake. Outside, traffic flowed to and from the boroughs, but I wasn’t allowed to move. The cop and the Triborough Bridge had conspired to trap me. “All right,” I said, and sank back into my seat.

I had felt this horrible sensation of immobility in nightmares before. I was in no man’s land, far from the dense grids that splay across this corner of the world. I couldn’t slink among buildings, dodge clogged cars, or glide through closing subway doors. I could see the skyline, but I couldn’t be among it, couldn’t let it do what it does best: embrace me.

The cop turned back to the driver. “Since you don’t have your license with you, and this isn’t a registered vehicle, we’re writing you multiple tickets.”

“It’s my brother’s car!” the driver protested. I believed him, but the cop wouldn’t hear it.

They continued arguing. The cop was just short of cordial. He seemed to relish his catch, deriving from it some perverse form of humor.

My Citizen Complex chimed in. “Argue with the cop!” he implored. “Capitalize on your lack of accountability to defend someone in a precarious position! Assert your privilege. Be an agent of change. Put someone else first!”

Too little, too late. By the time I moved on from my half-baked ruminations, the cop had handed the driver a wad of brightly colored paper. “Take him where he needs to go,” he ordered, motioning toward me. He receded back along the median and into the fleet.

The driver closed the window. In a matter of seconds, we were back in Manhattan-bound traffic, and I started breathing normally. The sun had almost fully disappeared behind the city.

We descended from the bridge in silence and cruised west on 125th Street. I looked for a subway station, eager to cut the ride short, to shake everything off. I anticipated the alternative route: a perfect ride on the downtown express train, which would take me a few blocks from my grandparents’ apartment. No one would touch me, or even look at me; everyone would just flutter and hum together, naturally. A perfect embrace.

“Public transportation is good; private transportation is bad!” my Citizen Complex reminded me, bragging that it was right all along. What an asshole. A decent citizen would have argued with the cop, written down his badge number, offered to pay part of his driver’s tickets. A real denizen of this city would already know that riding the subway—the most basic tenet of New York’s public life—isn’t about anything more than getting places quickly and cheaply. My Citizen Complex was greedy, insufficient, useless.

At Lexington, the 4/5/6 station appeared. “You can just let me out here,” I told him. He glided toward the curb, then said, “I’m sorry”—for what, I didn’t really know. He also told me the tickets totalled around $700. I wondered how many shitty citizens he would have to drive around to pay that off. As I stepped onto the sidewalk, I looked at my watch. Plenty of time, after all.