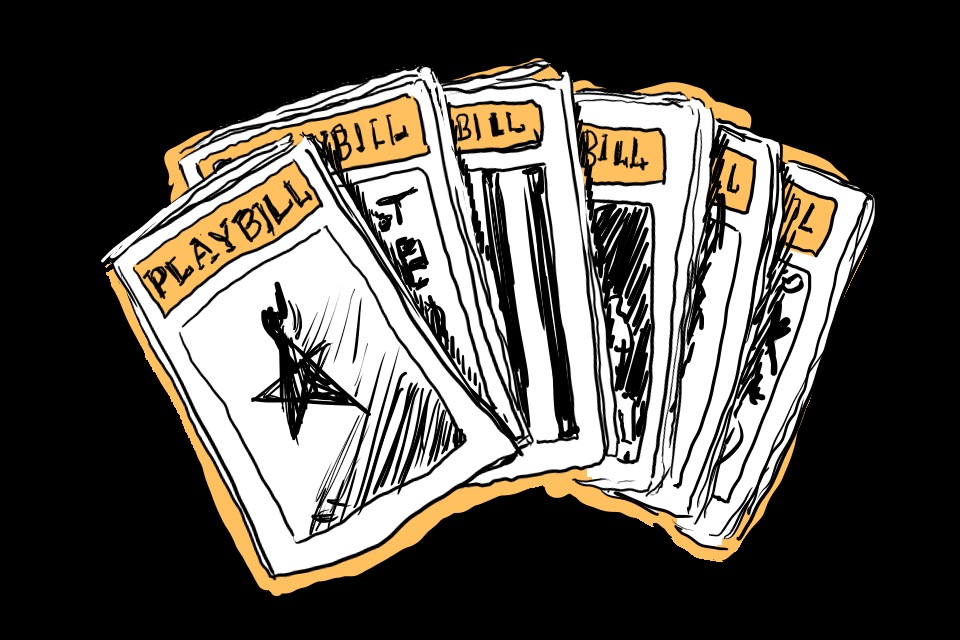 Amid the trove of phone wallets, flash drives, club flyers, and other miscellaneous merch in my desk lie a collection of Broadway Playbills. Five, to be exact, amassed over the span of my first eight weeks in Morningside Heights. The special Sharpie used exclusively by Broadway enthusiasts cloaks two of my Playbills in a vast array of silver signatures.

Unlike the rest of the merch in my desk, these weren’t free. No, these were the spoils of persistence—daily efforts to enter every Lucky Seat and Broadway Direct lottery available. In the case of “Freestyle Love Supreme,” it required showing up to the box office, minutes before the show started, to plead for discounted tickets.

As I flip through the pages of my Playbills, the memories and stories of each come rushing back. Each pamphlet, marked by its signature amber headline, represents an article of rebellion. Each Playbill symbolizes an evening when I should have succumbed to the influence of academic stress and a late night of studying in Butler… but didn’t. Instead, on those five weeknights, my friend and I chose the twinkling lights of the Theater District; the unrivaled, pulsing energy of Times Square; the grease-filled, oozing slices of Joe’s Pizza.

As a lifelong resident of Los Angeles, I was more accustomed to the glitz and glam of Hollywood. Before arriving at Columbia, I didn’t have much exposure to the theatrical arts (full disclosure: I didn’t know that “stage door” was a phrase until I arrived here). As a kid, my acts of rebellion included purchasing tickets to a PG movie, then darting into an R-rated theater when the usher wasn’t looking. Or, I’d spend an entire day at the theater with my friends, seeing four movies (or as many as we could before our eyes started to literally glaze over) for the price of one. Yeah, my preteen self was quite the daredevil.

At Columbia, I occasionally find myself lost within a Daedalian labyrinth of coursework, extracurricular activities, and internship applications. There is a certain pressure that exists to conform to academic institutions like Columbia: Work hard, sleep little, graduate with a high-paying, prestigious job.

Sifting through these Playbills now, I can’t help but reflect on the simplicity of childhood. Back then, imbued with an insatiable curiosity for the world around me, I challenged the status quo without hesitation. These Playbills reflect that playful rebellion, an instance when relaxation and relief triumphed over the realities of life. Each represents a moment when spontaneity, and perhaps even a sprinkle of illogicality, won over rational decision-making.

As the pages of my “Sea Wall/A Life” Playbill tickle my fingertips, I can’t help, but recall its origin. After my friend and I exited “Frozen,” the singsongy chorus of “Let It Go” still ringing in our ears, we sprinted out of the exit and made a beeline for the Hudson Theater stagedoor, hoping to catch a glimpse of former Columbian Jake Gyllenhaal. Mistaking us for audience members of the recent “Sea Wall” show, the usher thought we misplaced our Playbills and offered us new ones. Our mad dash through phosphorescent billboards and costumed iterations of Disney princesses felt liberating. At that moment, as we incurred irate honks for blatant jaywalking and odd looks from bewildered tourists, I rediscovered my youthful exuberance.

Twenty years from now, I won’t remember my imperfect grade on a comparative international politics essay between offensive realism and international liberalism. But I will never forget these spontaneous, impromptu theater escapades.

Now, I’m waiting with bated breath for my next lottery win. Even better, I’m only in the prologue of my Columbia journey. Who knows what the next act will bring?