A Tale of Two Kitchens

A Tale of Two Kitchens 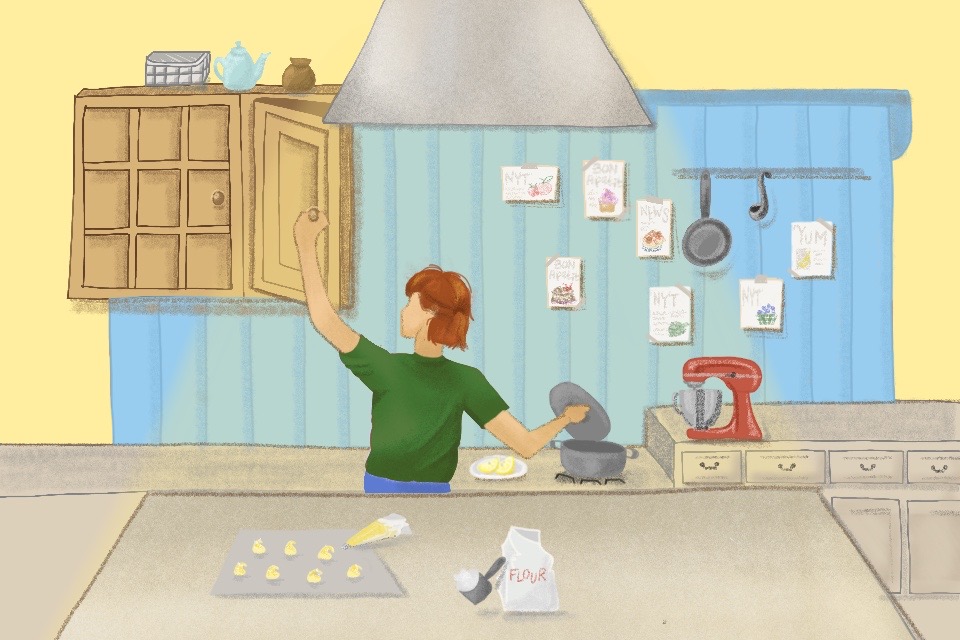 When I was younger, I treated our kitchen like a small museum. The room itself was unexceptional: old and creaky and always full of either too much or too little sunlight. But framed clippings from the New York Times, the Washington Post, and Bon Appetit covered the walls like an exhibit. This was where I took my friends, serving as the temporary docent for my mother’s former life as a pastry chef.

Here is the experimental cake, made with lemon curd and fondant. Here are the tiny personal cakes, designed to look like the kind of gifts you might find under a picture book Christmas tree—emerald and gold, the corners perfect, the sugary ribbon looped and trimmed. Here are the powder white wedding cakes, and the square checkerboard cake constructed only out of hardened chocolate. Here is my mother, smiling.

Her celebrity at my elementary school arguably eclipsed her professional reputation. My childhood friends liked to joke that they fasted before visiting to prepare for my mother’s meals. They grew accustomed to her special holiday treats. Every once in awhile, she’d moonlight as our cooking instructor for an hour, making pancakes or mini muffins or chocolate chip cookies. I became convinced my friends only liked me for my mother, and by middle school, her snack contributions dwindled.

Our family history runs through kitchens. Collectively, we have owned two bakeries, two restaurants, a produce company, and a bed-and-breakfast. My mother is a chef who married a bartender in a “back of house meets front of house” romance.

My parents cut their teeth on ritzy Washington D.C. restaurants, some of which still exist and some of which don’t. Their closest friends are still mostly fellow food people. My collection of culinary knowledge is both specialized and hopeless; I know a pinch of salt makes almost every baked good better. I lack any kind of knife skills. Baking, I learned, is as much superstition as it is science, and recipes are sometimes imperative and other times superfluous; I never learned how to make this call.

For most of my life, nothing about cooking interested me. There probably was a day when my mother asked me if I’d like to help with dinner, and I said no for the final time. My mother could perform any task so much more efficiently than I would have been able to that I think she eventually cut her losses. When the time came in high school to find a part-time job, I joined the world of retail over food service.

Cooking seemed distinctly vestigial to me, a skill that my mother was certainly good at, but also one pushed on women regardless of their interests. Preparing for college, I looked forward to a cushy meal plan. To resign myself to cooking would have been a concession to heteronormativity, to inevitably never being as good at it as she was.

My mother, for her part, delighted in my moving to New York where she had served as the head pastry chef at The Four Seasons years ago. She had an apartment on 87th St. and Lexington Avenue, and walked 30 blocks to work before the sun rose to bake bread, pinch pie crusts. In the evening, she taxied home. She never took the subway. I try to imagine her, small and tan, her platinum pixie cut crushed by the crisp white of her chefs hat, commanding a platoon of similarly outfitted men.

I came to New York, and then spent most of my freshman year in a low-level state of depression for a cornucopia of small reasons. Making friends in college is hard. Political science was not the major for me. All of my peers seemed to be the children of doctors and lawyers and executives. And, as I would come to realize, campus dining steals most of the joy inherent in eating—a joy my family had instilled in me, even if mostly by osmosis.

I saw some of my own opinions reflected in my classmates and then I began to doubt them. I discovered, for one, that Barnard’s identity as a historical women’s college did not seem to translate into an appreciation for domestic skills traditionally associated with femininity—skills including making and appreciating food.

I returned to campus for my sophomore year with a mission in mind. At TJ Maxx, I bought a saucepan, a pack of two small knives, a rubber spoon, and a dish towel which doubled as a cutting board. I read recipes on my phone, ignored them, thought about how my mom did things, and never once asked for help.

Over the course of a semester, I perfected a variety of meals that were really meal components: roasted brussels sprouts, sweet potatoes, and a veggie burger. I seared eggplant and tomatoes and threw in some spaghetti. I boiled mushroom risotto until the entire suite smelled like onions and broth. I learned that buying pre-cloved garlic is a waste of money and flavor. I made homemade pesto to drizzle on pasta and rice pilaf and all other varieties of Trader Joe’s Fearless Flyer items.

Throughout the summer, I poached many, many eggs. I dropped just as many on the floors of my various kitchens. The process still seems a bit magical to me: If you make a small whirlpool in hot water and manage to drop an egg exactly in the eye, it will seal up into a perfect oval. The fresher the egg, the fewer wisps of egg white end up in the pot. And then there’s the tender ooze of yolk when you bring a blade to its edge, at which point you can add the salt, the red chili flakes, a sliver of avocado.

That summer, I also developed a habit of purchasing too-big bushels of bananas and almost never eating them before they bruised. I made banana bread from a boxed mix over and over and over again, until the motions became routine: mashing with a fork, pouring of yolk, stirring the smooth but lumpy batter.

My suite oven, only slightly more sophisticated than an Easy Bake, overcooked the edges and undercooked the middle of just about anything inside of it. I rotated the banana bread every few moments, apologizing as I interrupted my roommate’s meal prep. Sometimes I added walnuts or chocolate chips or slathered on a little almond butter, although I usually did not. That summer, I brought banana bread to people I loved, to people who had asked for it, and to people who hadn’t. I talked about a rectangular pyrex dish with a reverence that surprised even me.

Cooking is stressful, but healing. I often treat it like a skill I am picking up only casually, by ear, so as not to look like I care more than what is absolutely necessary. I am learning to be better, although I am still bad. Even if my food is under seasoned or overdone, there is virtue in salt, black pepper, crushed garlic, a wedge of lemon—flavors that are simple, snobby, and altogether unreplicable in the dining halls.

Most Sundays, I walk out of my retail job after selling clothes for hours. I buy a coffee I don’t need. I take the subway back to my dorm where my roommate and I make blondies and listen to Bob Dylan. Sometimes, however, I take a different route home. I pass by my mother’s old brownstone on 87th St. and Lexington Avenue, and I promise myself that the next time I visit, I will ask her to teach me how to cook—even if it feels like a kind of surrender.